Sleuth gets accused of being homostonophobic by, er, Manchester's pavements

Sleuth has spent many an entrancing and enchanting moment interviewing Beetham Tower, The Statue of Friedrich Engels, Piccadilly Gardens, A Bowl of Pasta and A Letterbox, now it’s the time for him to put his foot down.

Sleuth: How are you feeling?

Manchester’s Pavements: Not good. People keep walking all over me. It’s not easy down here. There are some really heavy people who put me at breaking point. Taxis seem to think I’m a parking space and I even get accused of a criminal offence.

Manchester’s Pavements: It’s not at all my thing either, given my nature. I really would rather not look. Not everything’s M&S up there.

Sleuth: Good, you shouldn’t look. But what do you mean, it’s not your nature?

Manchester’s Pavements: Yes, we’re gay, male pavements. You sound surprised? What’s the matter with you, are you homostonophobic? I know what you are...

Sleuth: What am I?

Sleuth: I’m not. No, I like to walk down the middle.

Manchester’s Pavements: I reckon you are a proper kerb-crawler and I really don’t like kerbs.

Sleuth: I thought you were one and the same with kerbs. Why don’t you like kerbs?

Sleuth: They would be. Is there anything else you’d like to get off your chest…er…slab.

Manchester’s Pavements: Yes, coffee stains, vomit, piss and, even, occasionally shit. You humans can be horrible.

Sleuth: We can, but you are also inconsistent. York stone one minute, dodgy concrete aggregate the next and occasionally just tarmac infill.

Manchester’s Pavements: That’s not my fault. Blame the powers that be. Do you always point out defects to the inanimate objects you interview. I have different budgets to work with and decades of different work. Can I tell you a secret?

Sleuth: Yes, I promise to keep it quiet and publish it.

Manchester’s Pavements (whispering): The city council have no coherent policy on pavements. Instead of telling all developers to use the same surface they allow them to choose whatever they wish while also replacing me piecemeal where they own me. I feel much more than schizophrenic. I’m totally put upon.

Sleuth: You don’t have to whisper we all know how bad our pavements can be. Anyway, do you have much fun, you sound pretty miserable?

Manchester’s Pavements: Oh yes. I have some great fun. I work bits of me free occasionally and allow rainwater underneath. Then when someone steps on me I tilt suddenly and splash them right up their legs. Cold, filthy water, with all sorts of spillages in it, I mean all sorts, right up a person’s trousers or skirt. Love it. Gets me every time. Once there was a party of Scots in kilts in town and I got every one of them. Ha, ha, still cracks me up now thinking of them leaping about as though they were in a ceilidh. Speaking of cracks….

Manchester’s Pavements: Well, you know that famous kid rhyme of ‘Step on a crack…’

Manchester’s Pavements: I say, ‘Step on a crack and I’ll give you a watery slap.’ 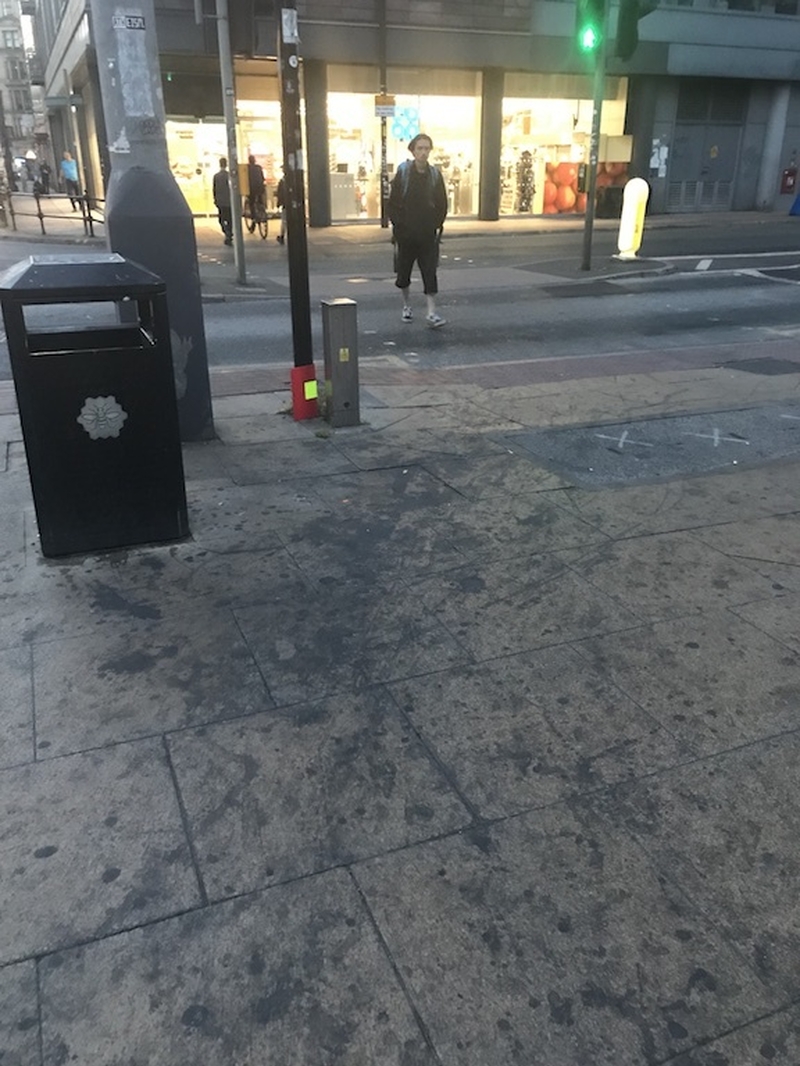