It’s not a Michelin Star restaurant unless someone brings you a plate of pebbles.

Well, this is not a Michelin star restaurant and, er, those are not pebbles. At least not all of them are. Two are jet black chocolate coated foie gras mousse spiked with stem ginger. Like a very goth, savoury Xmas truffle. Goffle? Goffal?

Wait, are goths all vegan now or are they still guzzling blood? I can’t keep up.

That mysterious shiso flavour, normally found as a micro-herb, is always difficult to pin down, somewhere between cumin, musk and old libraries

As a bit of a lapsed goth myself (guzzling blood at weekends only), I’m very much at home. Which is apt since the restaurant I’m in is called HOME.

We’ve reviewed it before but it has since changed location and with the new HOME comes a new colour palette. Gone are the breezy, uplifting navy on white tones. Now, like Kat Von D obliterating her regretful tattoos, everything - from the walls to the cutlery to the (gorgeous) crockery to the pebbles to the toilet seats - has been daubed an uncompromising matt black.

Punctuating the blackness are ornamental pieces made in the form of earthy, witchy things: driftwood, mushrooms and more bundled twigs in vases than you’d find in a house in Wilmslow. When HOME owner Liz Cottam’s PR sent a press release last year about her latest venture CORA, the promo photo looked like a Scandinavian death metal band. I think me and Liz might get on.

Liz isn’t the only chef with a penchant for the macabre in Leeds. See also Michael O' Hare with his shares in squid ink and plates resembling a selection of surgically removed specimens.

My first thought is that Leeds band The Sisters of Mercy are still weaving their dry ice into everything in the city. But it goes back further. The Brontës might have been the original Yorkshire art-goths. Or is the smoke that pervades this menu a cruel reminder of barbecued witches? Either way, the ripped out, still beating heart of all things gothic pumps away in Yorkshire and I black-heartily approve.

As with a lot of places these days, my adventure with HOME started way before my visit on a website called Tock. I had to go through a whole questionnaire to book: Do I want a champagne and oyster on arrival for £20? (no) Do I want cheese? British or French or both? What kind of wine flight, if any? A sizeable deposit made me antsy in these unpredictable times but I get it. No shows are a bitch at the best of times but at prices like these, well.

If you can’t find the restaurant as you trail around Brewery Wharf, I’ll help you out, it’s the gas cylinder shaped building with a sculpture of a giant pod in front of it. Once you’re ensconced in its curved walls, despite floor to ceiling windows enabling of on the outside world, the bar still feels clandestine.

The ten-course (plus the optional cheese) menu shouts just one capitalised word per course. This minimalist style is preferred by some high end restaurants but not by me. I like to know about provenance for a start. I also like to look back afterwards once I’m off the waltzer and reflect on the flavours. Of course, the waiter gives long descriptions with each dish at the table but I often have to ask them to be repeated to properly take it all in.

A deep fried lobster claw dyed to look like a Xmas present for a very naughty child is the best pub scampi ever. A poached hunk comes with crispy chicken skin, a gritty coated Ratte potato sits on a garlic-pungent ajo blanco.

Gordo often (and repeatedly, as if each time it were new information) tells me that the rules of the old guard French Michelin restaurants were that there must be certain things on the menu: lobster was one, foie gras another. If there’s a black nail polish wearing Michelin inspector doing the rounds at any point (I’m available BTW), Liz would have a few ticks in the boxes by now.

We’ve ordered wine flights - one regular and one premium. Kicking off with a glass of fizz in the form of a biscuity Limoux cremant with our lobster snacks.

My mate knows, in his words, “fuck all” about wine, and I am a fanatical, straight A wine school student. I’ve ordered one of each flight so we can share - and see if the premium one is worth the extra dosh. The waiter makes the interesting decision that my (male) pal will be poured the premium wines. He doesn’t check first. Call me a raving feminazi if you like (and many do), but this feels a tad presumptuous.

The premium wine flight features some big hitters, but a few times we prefer the non-premium option. The presence of some natural wine shows the restaurant is more Billie Eilish than The Mission. Natty is not always just an excuse to put some graffiti on a label and charge three times the price. Crucially, these kinds of restaurants will find you the really good examples - a crystal clear, honeydew-nosed Verdejo served alongside Ragstone with onion foam, caramelised pecans and Mirabelle plum sorbet is one of my faves of the regular flight. A sniff of another, a vivid orange makes my friend feel like he’s “going to the lower ground in Selfridges” - that’s another yes from me, everyone knows I love a floral.

Of the conventional wines, a regular Aussie Shiraz knocks the socks off a premium Californian Zinfandel and a struck match Alvarinho wins over a premium French Chard.

A meaty tortellini filled with rabbit (one of my favourite dishes on the menu) is paired with two polar opposite wines for the two flights: a buttery bacon butty of a Chardonnay (the better choice for me with this dish) and a sugar snap Savvy B.

There are nods to Rogan in a lamb tartare with coal tar. Perennial chef’s fave Nasturtium leaves are not just a pretty face but add peppery interest like mild rocket while a skunky looking anchovy toast thwacks us with flavour. I realise later that was Liz’s Great British Menu starter and it seems it’s been somewhat refined.

Scallops, beer brined and bonfire scented are basted in what tastes like marmalade, it’s a bit of a (to use a classic food critic term) bullying flavour for the delicate seafood - but we’ve never had a scallop like it. It comes with a corner shop style extruded potato product, gotta love a bit of Bobby’s-chic.

A bite or two of skate, a fish always worth ordering, is served with capers, hen of the woods, burnt butter sauce, and a coral shaped chive tuile. The wild nature theme weaving through the narrative of the menu. I can’t fault the flavours.

More delightful smokiness comes in the form of BBQ venison served with (on trend) Koji beetroot hidden under a giant shiso leaf spray painted gold. That mysterious shiso flavour, normally found as a micro-herb, is always difficult to pin down, somewhere between cumin, musk and old libraries. Blackberries in beef fat and a tumble of roasted oats all smack us round the face with the flavour of rendered animal dripping - a granola for real men.

Our pre-selected French cheese course (£9.50pp supplement) turns out to be a fondue to share. It’s served with too much of an unsophisticated onion chutney that overpowers the delicate cheese. Fun for some dippy interaction though.

The three final little bites are more than enough sugar for me, these include the prerequisite handmade chocolates (special mention for the salted banoffee, just wow). Most memorable dessert bits are a rose petal dipped in Italian meringue served with kaffir lime leaf ice cream (one of my all time favourite flavours), and a bouncy coal tar jelly that comes with a fine but unremarkable chocolate fondant.

This new HOME is where the beating heart of Emily Brontë is. A sanctum for rich witches. A treat for former emos that became solicitors. A break from the norm for privileged food writers that get to eat in places like this more than anyone deserves.

It’s more experimental and modern than the likes of Northcote, but nowhere near as out there as L’Enclume. It’s got something of the dirty black thumbprint of The Man Behind The Curtain, although with less (well, no) Jackson Pollocked OK sauce and more of a nod to classic French cookery.

There is an awful lot of the old boys club to Michelin, many restaurants in both the cutting edge and classic categories seem to be forever ghosted. HOME is “in the book” but is that enough and does a star even matter? Not to me but for restaurants in this category, with this ambition, and with these prices, it goes some way towards justifying and sustaining them. Is an appearance on The Great British Menu more of a selling point than the French tyre company's recommendations these days?

Maybe I'm your trusted guide, and Confidentials is your barometer for which restaurants to spend your cash in. Well, I say go if you can afford it - but go for the cheaper wine flight. 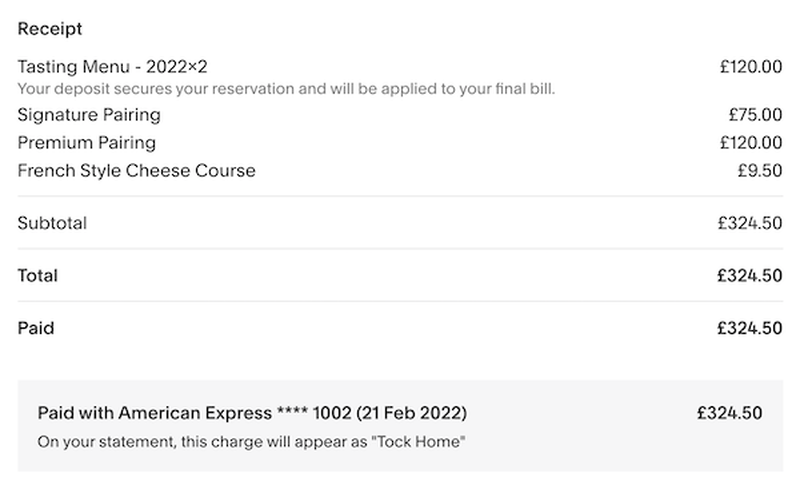 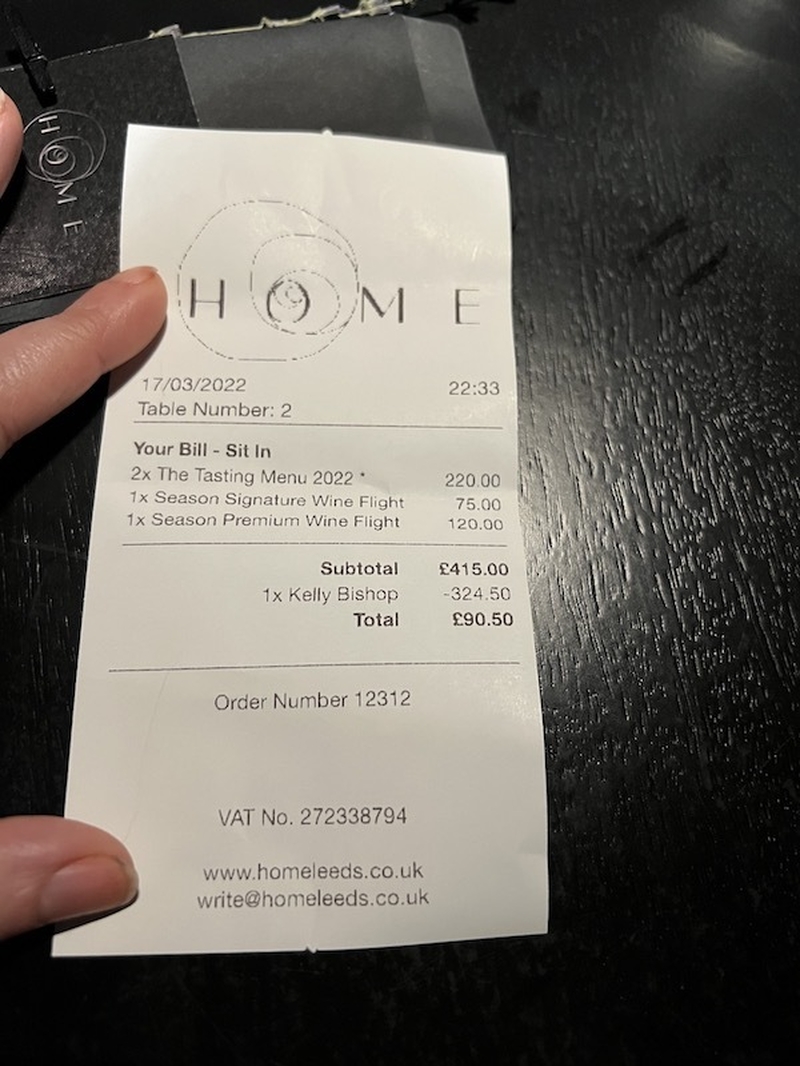