Hearth Of The Ram Reviewed

HEARTH is such a comforting, toasty word. Combine it with Ram, though, and it goes all bloodily pagan on you. Animals WILL be sacrificed for your pleasure at Ramsbottom’s upstart new restaurant, but fear not, they come portioned and cooked.... and what cooking.

Hearth of the Ram has only been open since April but has shed its launch chef in favour of Abdulla Naseem or Naz as he’s known to everyone in Rammie and far beyond. 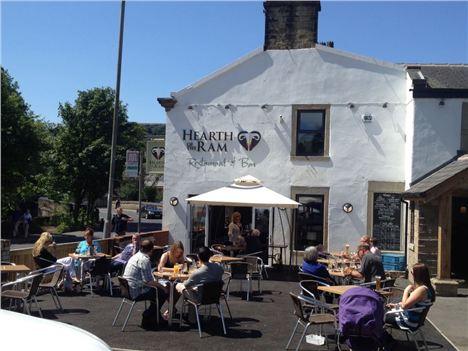 The outside in sun

That’s thanks to nearly a decade of toil in the town’s stalwart Ramsons, which won Good Food Guide readers’ restaurant of the year in 2008. I remember it well. I was with the team in the British Museum when one Heston Blumenthal handed over the gong – one of many awards that went Naz and Ramsons’ way, sparking the town’s development as a gastro destination.
Earlier this year, Naz jumped ship to work at a Burnley pizza/pasta pub called Nino’s Fighting Cocks. Odd it was. I went a couple of times and amid the frenzy of mass catering this most meticulous of chefs looked like a turbot out of water. Thankfully, after a holiday escape to his native Maldives, he found this fresh billet in his adopted hometown.
Hearth sits on the bend of Peel Brow before it attempts to go vertical in its ascent to the M66. Once it was a wayside inn hospitably called The Good Samaritan. Latterly that was a case of wishful thinking until a Scottish couple with vision and no little nous took over. 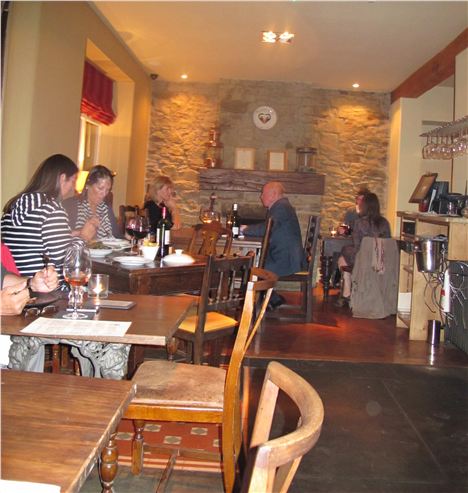 Euan and Dena Watkins have 20 years’ experience in the trade, but it’s their track record of eating at the likes of El Bulli and The French Laundry that signals their fine dining intentions.
The food? Strangely familiar, of course. The chocolate fondant, with the perfect dark spicy melt in the middle (£6.95) – pure Ramsons flashback. 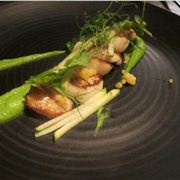 ScallopsSimilarly my deft starter of nuttily seared hand-dived king scallops, pea pure puree, pea shoots (£7.95) exhibited the light touch with the freshest ingredients gospel of his old boss Chris Johnson, though maybe at Ramsons the migratory bivalves would have been classically paired with cauliflower.
Enough, though, of the establishment across the tracks. It is too early to say there’s finally a serious rival in town. Hearth doesn’t quite look the part yet. We were crammed into an  L-shaped downstairs of odd decor flourishes. An overload of stained and leaded glass, red banquettes and burgundy ruched blinds, pub tables and flagged floors culminated in a big stone hearth surmounted by a ram’s horn logo.
Industrial stairs (inherited?) lead to a 58-cover space still to open. I should have traipsed up to have a look. I imagine this first floor will be the focus of Hearth as a serious restaurant. Downstairs alongside space for 30 covers there’s a cramped bar with four handpumps. Taylors Landlord is the regular cask choice, Phoenix’s Arizona and Old Slapper were guesting on the monsoon evening we chose to visit.
It was a night for cosseting and Euan, his massive Geordie Maitre d’ and a local lass-in-waiting fussed about us just enough as we dried out. A bottle of Aster Reserva, Ribero del Duero 2006 did the trick, too. Subtle oak, blueberry rush, a soft feel belying its 14 per cent alcohol, it was smashing value for £27.50. By the 175ml glass it costs £7.50.
Hearth’s is a small wine list but spot on with its available-by-the-glass choice and selections of 'flights' of three wines to demonstrate the range. Among the spirits whisky stands out – from single malts to (sic) Pappy Van Winkles 20-year-old bourbon. 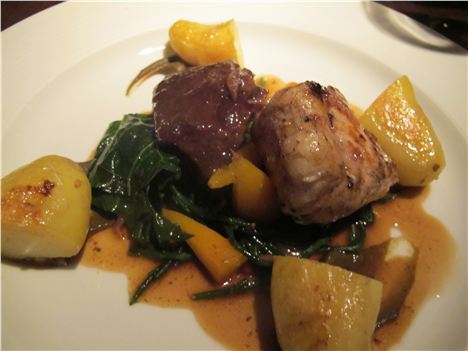 Another ravishing starter consisted of two seared partridge breasts and a confit leg, earthy lentils and pancetta and pear caviar. It’s a conceit involving pear juice set with agar dropped in oil to form caviar-like pearls, our waitress explained. No sign of a foam yet, but you sense they are coming when the confidence of the kitchen is built up.
By the time you read this pheasant and grouse may have replaced partridge and venison on a seasonally and source sensitive a la carte. 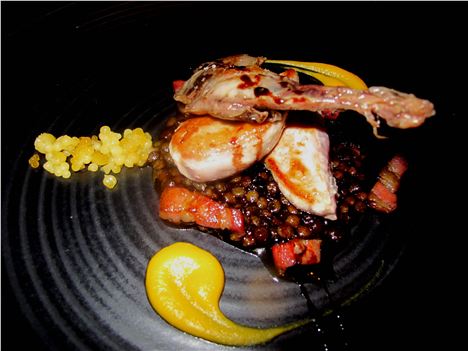 The £7.95 main of venison loin across the table from me came from Bowland – and with a port and beetroot reduction echoed by the rich ruby of the rare flesh. Celeriac fondant, shallot puree accompanied – epitome of the modern British approach here. As is the seriously good, entirely British cheese menu.
My main married the dense textures of ox cheek and monkfish, caper puree providing necessary oomph, and all for £14.95. One city centre restaurant charged me nearly twice as much recently for their meat/fish combo where a veal jus was poured over three minute medallions of monkfish and a trio of infant prodigy carrots. Swiz.
A 'tasting' of rhubarb (three ways, it might have read) came with a just wobbly enough vanilla panacotta (£6.95) that also came straight out Naz’s greatest Ramsons hits. 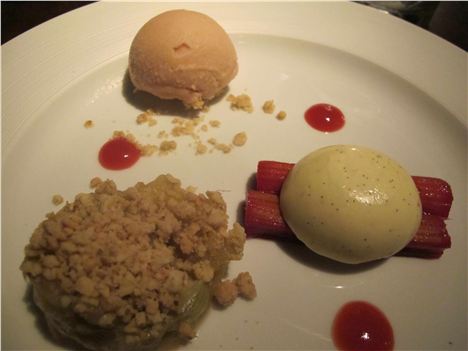 At the moment, Hearth of the Ram is competing with other gastronomically inclined pubs in the area, the award-winning Eagle and Child up the hill in Shuttleworth and the equally lofty MFDF Awards-nominated Shoulder of Mutton across the valley in Holcombe. Certainly Hearth’s affordable all-day pubby snack menu is quality but quite simple fare.
With Naz given his head by his new employers, though, I suspect, the bar (and not the one handpulling the Old Slapper) may be raised considerably higher.
You can follow Neil Sowerby on Twitter here @antonegomanc
ALL SCORED CONFIDENTIAL REVIEWS ARE IMPARTIAL AND PAID FOR BY THE MAGAZINE.
Hearth of the Ram, 13 Peel Brow, Ramsbottom, Bury, Lancashire BL0 0AA. 01706 828681. www.hearthoftheram.com.
Rating: 16/20
Food: 9/10
Service: 3.5/5
Ambience: 3/5
PLEASE NOTE: Venues are rated against the best examples of their kind: fine dining against the best fine dining, cafes against the best cafes. Following on from this the scores represent: 1-5 saw your leg off and eat it, 6-9 get a DVD, 10-11 if you must, 12-13 if you’re passing,14-15 worth a trip,16-17 very good, 17-18 exceptional, 19 pure quality, 20 perfect. More than 20, we get carried away.