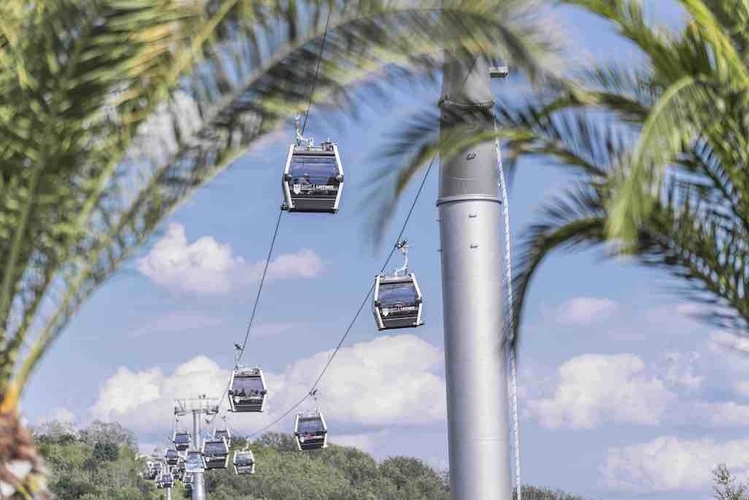 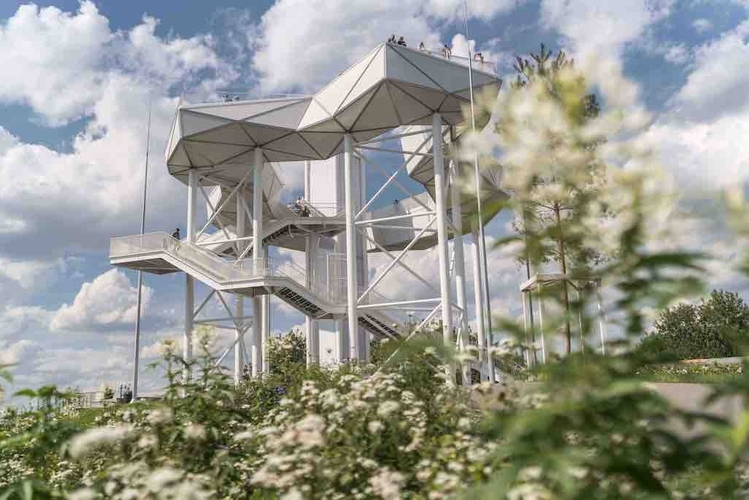 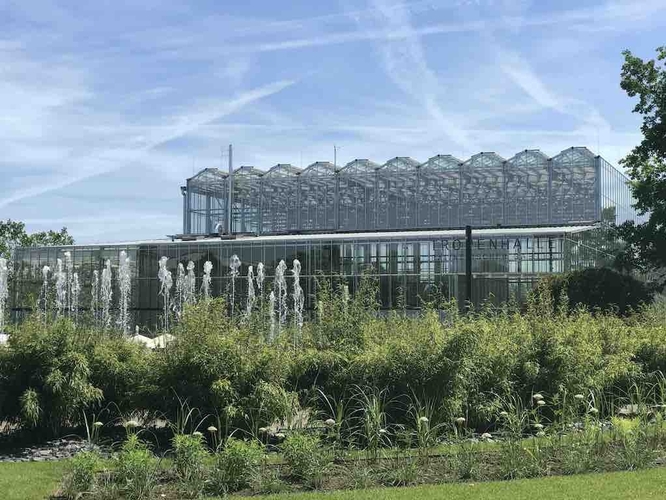 WHEN a cable car pauses and you are left dangling in the ether it’s a long way down and better not to look, but you do. This time there’s no Alpine vista as you might expect, just a cityscape of sporadic apartment towers and allotment patches through the summer haze.

It’s hard to believe at this moment I’m in one of Europe’s great cities heading for their mega equivalent of the Chelsea Flower Show, a celebration of international garden design and green urban lifestyle.

IGA – it stands for International Garten Ausstellung – is held every decade, each time in a different city, and in 2017 it’s Berlin’s turn to host it. The theme is ‘Gardens of the World’,  the motto ‘an OCEAN of colours’.

Via this mechanical ‘ropeway’ we are heading from the underground station entry point to the 104 acre showground. An estimated two million visitors are expected to make this journey by the time the show closes on October 15. 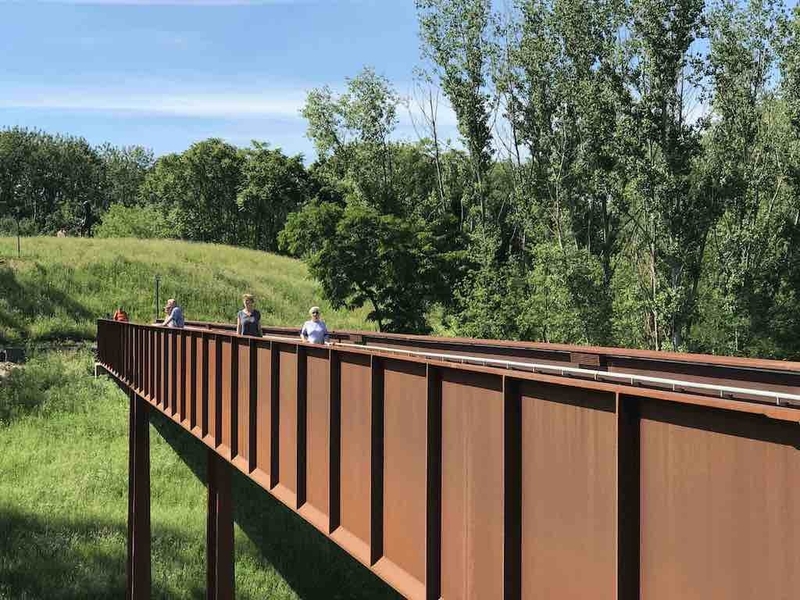 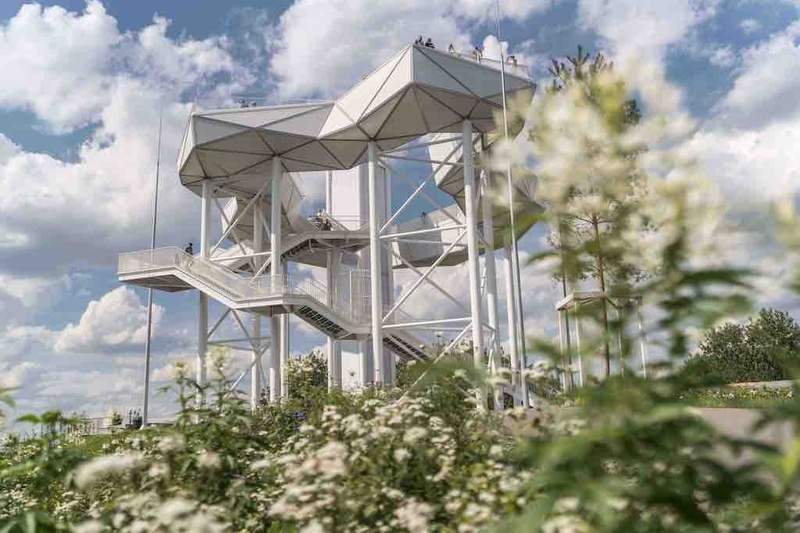 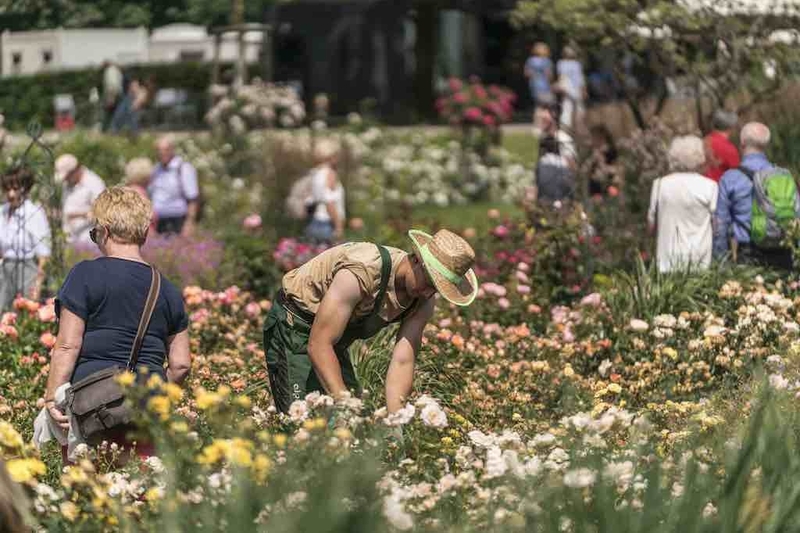 Touching ground at the midway, it takes a while for the magnificence of the project to grab you. Snubbing a futuristic observation platform on the Kienberg Hill and a costs-extra family-friendly bobsleigh ride, I amble down through woods, wondering what all the fuss is about.

Despite its urban concrete image, Berlin has always been a city of abundant greenery. Back in the Cold War days when it was a capitalist ‘island’ ringed tight by the German Democratic Republic this gave its inhabitants a chance to feel less trapped.

Since the Wall fell none of this has changed – 46 per cent of the whole city area is green spaces or lakes from forests such as the Grunewald to Central Park-like Tiergarten in the heart of the city. Even many of the notorious Wall’s death-strips have been reinvented as green havens just as artists and creatives flooded into the former East Berlin

So it’s not surprising that the first IGA feature that grabs me is an installation. As I cross the Tälchenbrücke, an 85 metre long rusted bridge, it begins to sing to me; all around is an aural collage of bird song. Down in the heart of the showground I am greeted by an acapella choir singing Bach, part of an extensive entertainment programme attached to the festival (not all so high brow – I spot an upcoming Elvis tribute). With lots for kids to do, this IGA is an attraction that would appeal to visitors beyond garden enthusiasts. 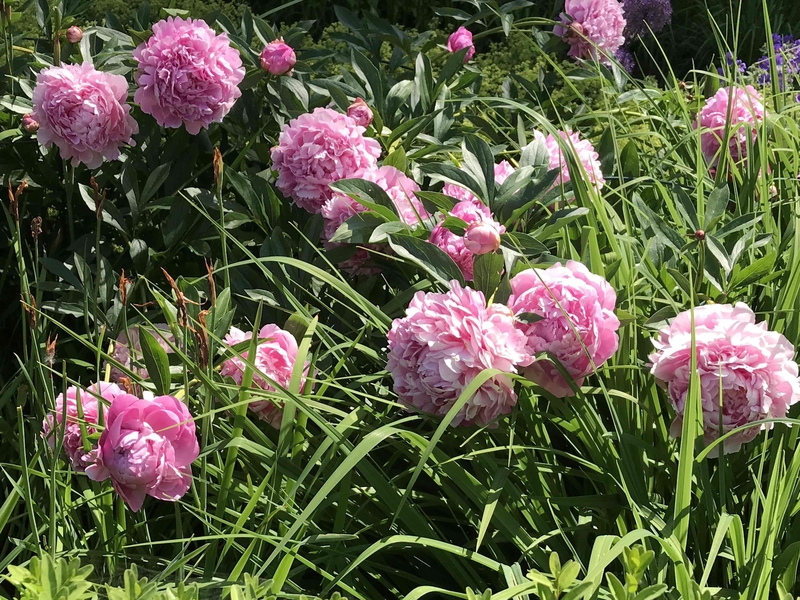 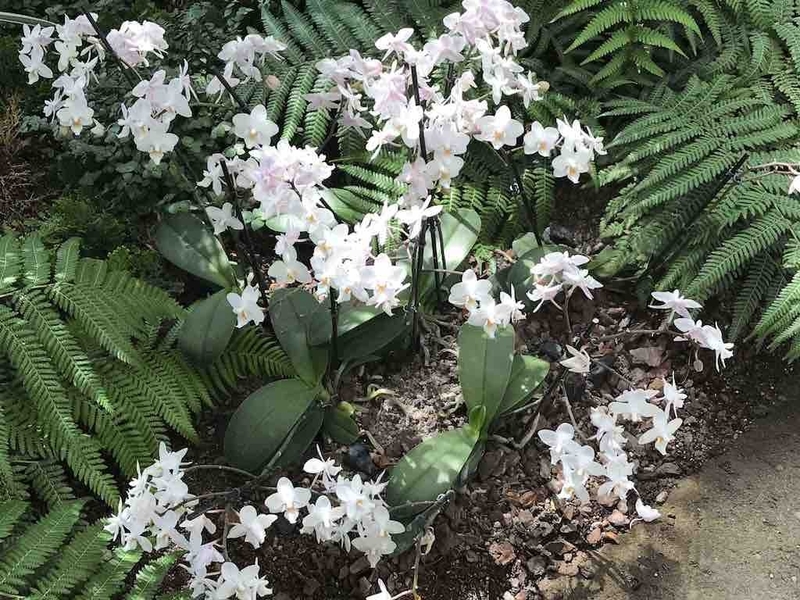 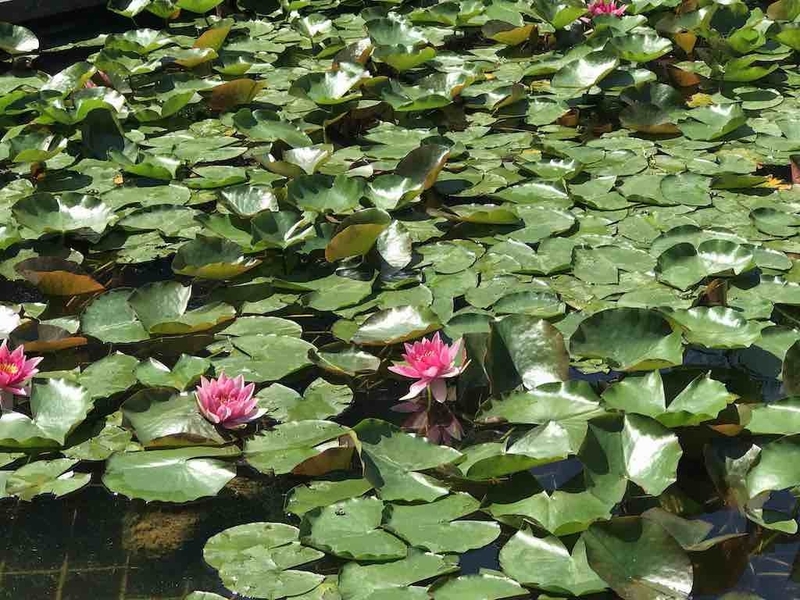 It is really down on the flat, site of the pre-existing Gardens of the World, now doubled in size, that the show finds its focus.

I loved the Balinese themed garden inside the towering (energy-efficient) hot house and the traditional Korean and Japanese gardens, the latter exuding a terrific Zen calm. More challenging is the Christian Garden, a square, sunken, hedged space echoing a monastic cloister, gold painted horizontal letters forming texts from the Old and New Testaments and philosophy. It is in stark contrast to the blaze of colours from  nearby rose and rhododendron displays 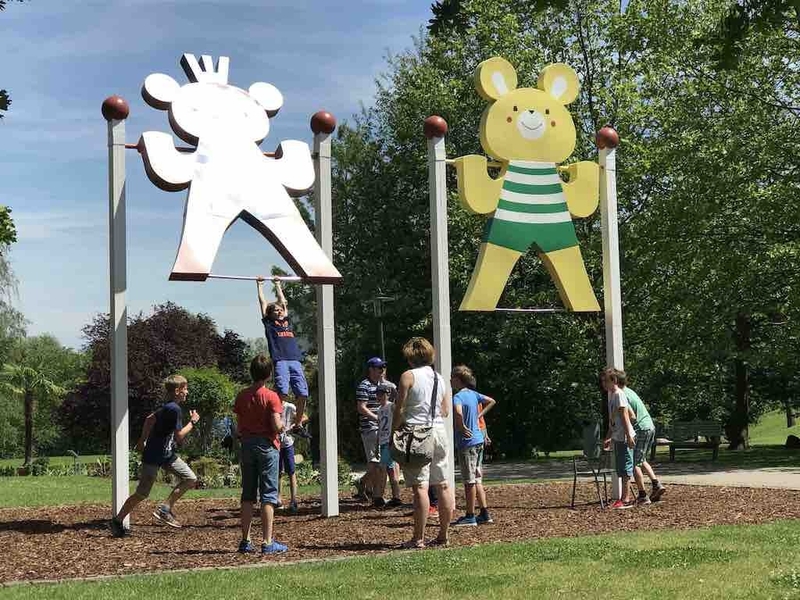 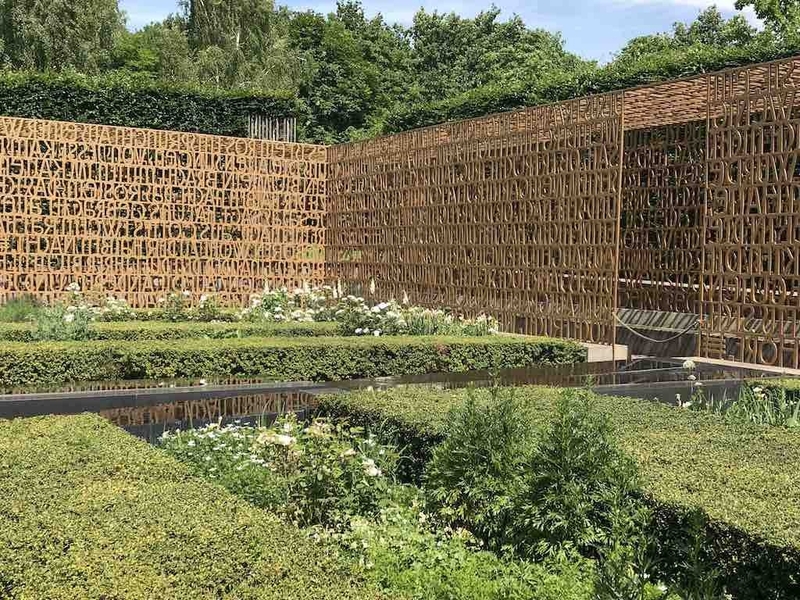 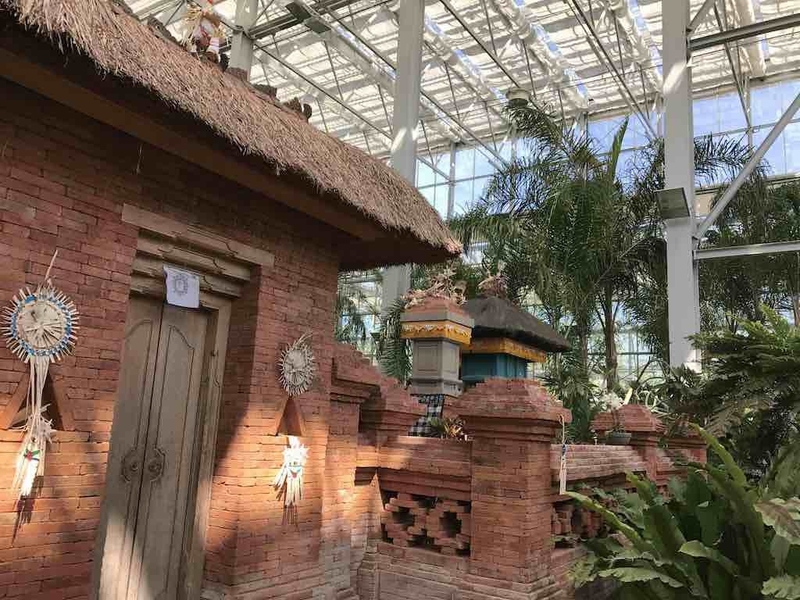 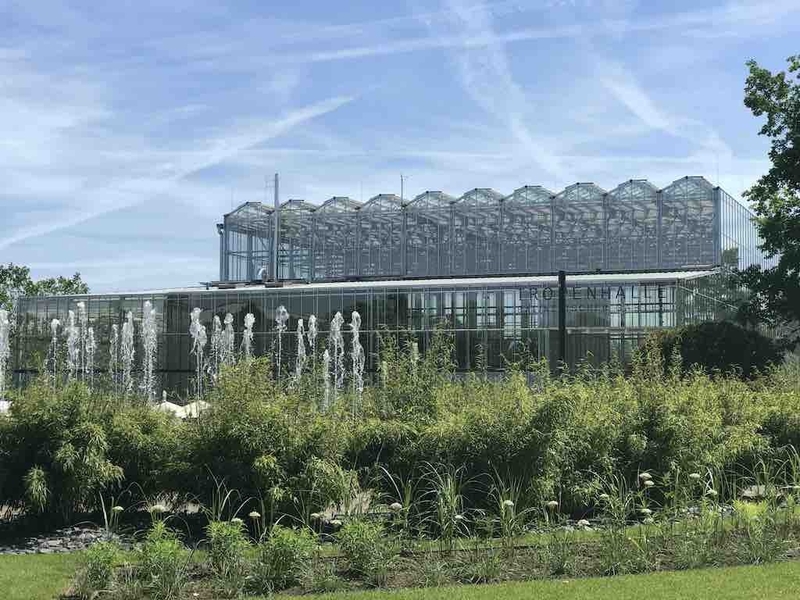 A 10th specialist garden, The English, has been added for IGA, which also features a ‘work in progress’ plot from one of our most acclaimed landscape architects, Tom Stuart-Smith. The Garden of Vulcan traces the ‘colonisation’ of a garden – “in this empty wasteland, we begin with opportunistic plants that arrive from seed. Trees begin to dominate and then the process of colonisation by animals begins with a network of paths threaded through the vegetation. After that the huts.”

And after that there’s a nod to mythology and symbolism as the garden develops. As you may have guessed, this is one garden show that is more thought-provoking than most…

Inexpensive guided tours are also available and many of the 8,000 events throughout the Festival are include in the price of a ticket, which also allows unlimited ropeway rides.

IGA can be reached from Alexanderplatz in the city centre in under half an hour in about 25 minutes via subway line 5. Neil Sowerby stayed at Motel One Berlin Hauptbahnhof, Invalidenstrasse 54, 10557 Berlin, +49 30 36410050.

He flew to Berlin from Manchester with Ryanair, just one of the bargain direct flight options available.

For full tourism go to Visit Berlin site and to book a Berlin Welcome Card, official tourist ticket giving access to public transport and many attractions plus 200 discount offers (from 19.90€ for 48 hours) go to this link.