I’m not sure I’m the target audience for George’s. But then I’m not sure who is. Before I visited, I assumed it was the preserve of footballers, their wives, and those who aspired to be one of the above. But the menu, the dishes, and the place itself are giving me mixed messages.

The plating is odd: every plate is decorated with swoops and swishes and double helixes of multiple purées and sauces

George’s sits in the centre of Worsley, on the edge of Salford. Opened in 2014 by Ryan Giggs and a couple of his school friends, it’s a large restaurant in a premium spot, sitting alongside the newer (hipper) Worsley Stores wine bar and Leopard Pie, a Neapolitan pizza place. The atmosphere tonight – a Wednesday – is subdued, with only a handful of tables in when we arrive. But on a Friday or Saturday night, it’s a different, more glamorous, story.

I order the Roquefort mille-feuille: layers of caramelised puff pastry alternated with Roquefort mousse. The mousse is nice enough – salty and savoury – but lacks the funky punch you expect from blue cheese. The puff is wan and distinctly un-caramelised. The reduction that loop-de-loops across my plate is supposed to contain port and thyme, but you’d have a hard job detecting either: it’s just generically sweet. I’m clued into the swoosh of purée being mushroom by its speckled brown colour, but there’s no depth, no oomph. It’s all less than the sum of its parts.

The chicken liver parfait is both more straightforward and more successful: butter-smooth, rich, and accompanied by thick slabs of homemade brioche. It feels generous and unfussy: a classic done well.

I’ve never had potato risotto before. I wonder if I’ve made an error ordering something so outrageously carb-heavy. But as it happens, it’s surprisingly light, with strands of grated potato alongside the rice, with a great stock base bringing a punch of savoury depth. Slippery spring onions and a crumbled nutmeg and parmesan crisp bring enough texture to tip the balance toward ‘comfort food’, and away from ‘nursery food’.

My friend orders the cod, and it’s clear someone in the kitchen knows what to do with a decent piece of fish. The white clam broth it sits on is thoughtful and balanced, the clams perky and unfussy, all sitting on a tangle of samphire.

The puddings sound fun: there’s a cereal milk panna cotta, a fancy-sounding Jaffa cake, and a butternut squash ‘brûlée’ (their scare quotes, not mine).

I go for the panna cotta, which comes with pleasantly sharp blackcurrant jam and a crunchy brioche croute. The panna cotta has the perfect amount of wibble, with just enough gelatine to hold its own weight on the plate, but no more, so that it collapses obligingly as you dig in. But the flavour is far too subtle. The idea of cereal milk – as popularised by Christina Tosi at New York’s Momofuku Milk Bar – is that it tastes just like the milk at the bottom of a bowl of cornflakes: nutty, sweet, deeply nostalgic. You need a flavour bold enough to take you back to childhood. Otherwise, what’s the point?

The plating strikes me as odd: every plate is decorated with swoops and swishes and double helixes of multiple purées and sauces. The fish is accompanied by huge piped kisses of parsley mash. I love old-fashioned, but this just feels a bit out of place.

It all adds up to something of an identity crisis. What is George’s aiming for? Is this a trendy neighbourhood restaurant? A flashy place-to-be-seen? A comfortable, reliable brasserie? I genuinely don’t know. Which is a shame, because the menu is full of promising ideas and personality. There’s obvious technique on display, too: the fish, the brioche, the panna cotta. It was by no means a bad meal. It was just a slightly deflating, and rather confusing, one.

Service is mostly prompt and smiley, even if we eventually give up waiting for the bill and go to the front desk. While we’re there, we ask about the multiple similar paintings of a Regency-era man that surround the bar. ‘That’s George!’ a young barman says. The restaurant is named after George Gilbert-Scott, whose church architecture can be seen across Salford and Manchester. He turns to another member of staff: ‘I love telling people that,’ he says, with a huge grin. So now at least I know who George is, even if I’m still not sure what George’s wants to be.

Olivia won the Fortnum and Mason Debut Food Book of the Year in 2020, as well as Guild of Food Writers Food Writer of the year. She also writes Spectator Life's Vintage Chef column for The Spectator magazine. She has two books in print, A Half Baked Idea and Butter: A Celebration. 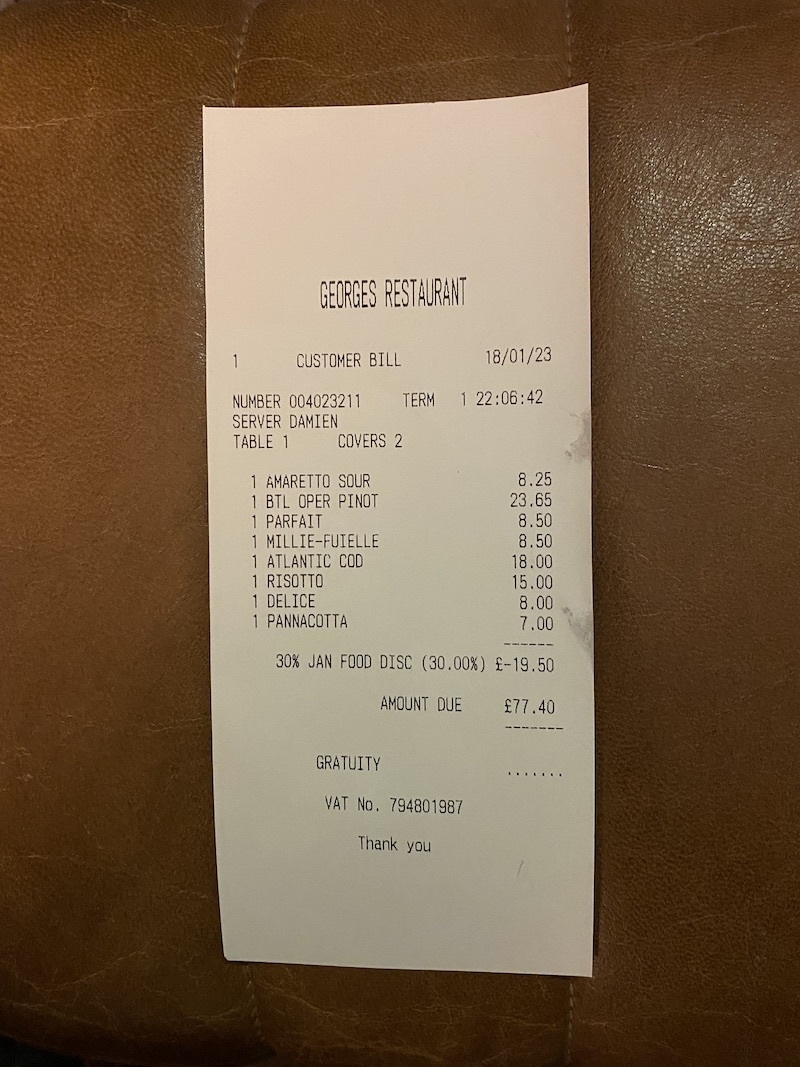