From 'bangers and pap' to 'bunny chow': a glossary of South African food

Confidentials heads to Chakalaka on Oldham Street to ask, 'What exactly is that?'

WE don't often encounter a cuisine we know almost nothing about. But the menu at Chakalaka on Oldham Street, with its talk of 'bobotie' and 'pap' and 'koek balls' had us in equal measure intrigued and intimidated.

According to the guys who run the place, Stewart and Chris, we're not alone. The majority of their customers don't know what to expect from South African food. And, as you'll see, the names of dishes can be misleading. (There's no actual rabbits in 'bunny chow', you'll be glad to hear.)

Despite its appearance (black, chewy, dry) we already knew how bizarrely enjoyable this stuff is

We headed up Oldham Street to Chakalaka and asked them to cook up some of their more idiosyncratic dishes, and explain what they were. Here's our guide to South African food, as found at (we think) the only South African food place in Manchester. 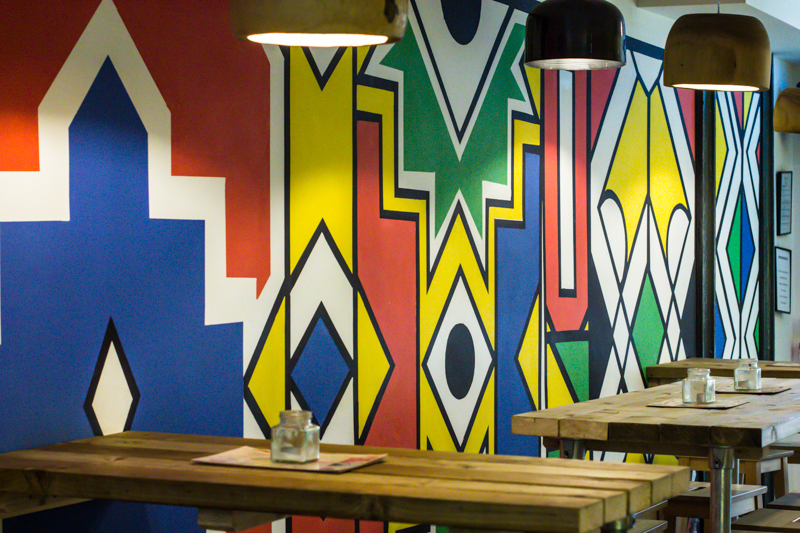 They say: “It's dry-cured beef. Like jerky but nicer.”

“It's essentially a bar snack – very good with a beer. When we first opened, we wanted to be a bar that did a bit of food, but then the food really took off. We also do 'droëwors' – a more hardcore version of biltong with a stronger taste and juicier texture.”

We say: There's something very satisfying about gnawing on a strip of raw meat

Biltong was the one dish we'd actually had before, so despite its appearance (black, chewy, dry) we already knew how bizarrely enjoyable this stuff is. And the butcher who supplies it to Chakalaka – a South African living in Heywood – knows his stuff. According to South Africans who eat here, his seasoning is spot-on. 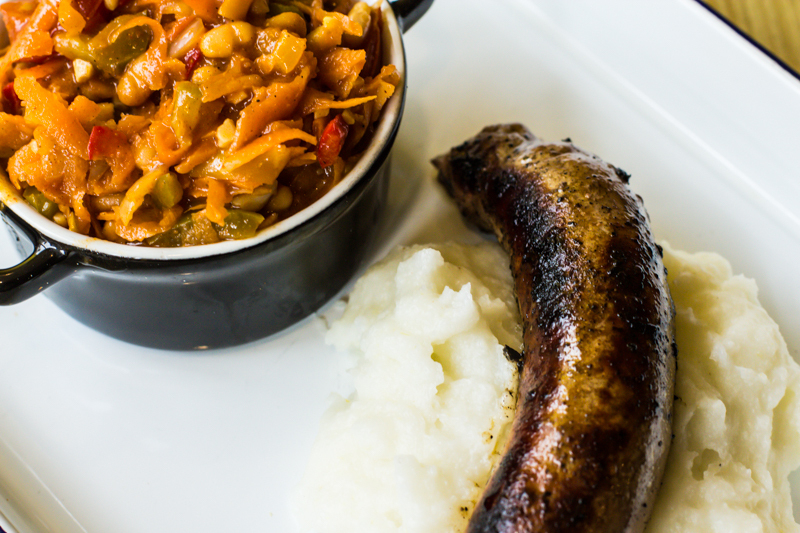 They say: “It's well-balanced, filling, and tasty – a South African version of sausage and mash.”

“The 'banger' is a traditional South African hot dog, and pap is a porridge made from creamed maize. Pap is cheap and nutritious but it's a labour of love to make it well without it going wrong.

We say: We were going to make this at home until Chris explained how long it takes

The 'Boerewors' banger is a well-seasoned mix of beef, pork and spices, and the 'chakalaka' sauce is an equally bold-tasting relish that complements it well. The smooth, creamy pap doesn't taste of much so it's a good accompaniment to the full-on flavours of the sausage and chakalaka. 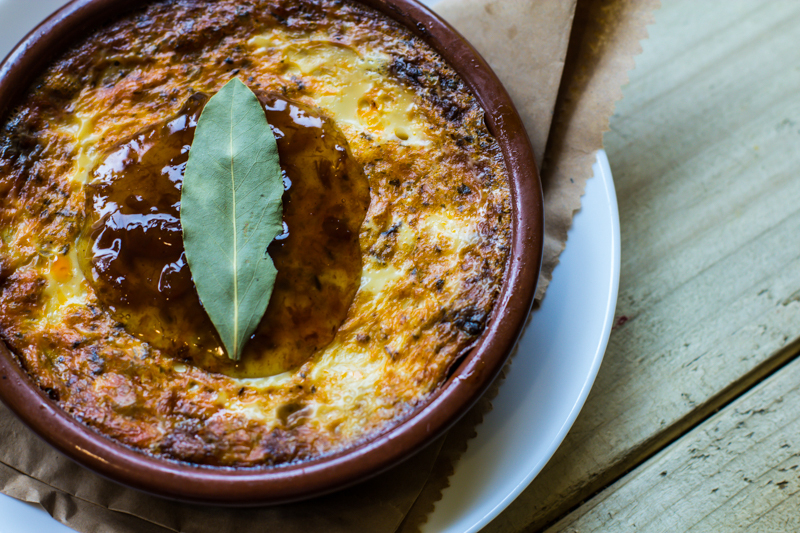 They say: “It's a Marmite dish. Even in South Africa, people either love it or hate it”

“This is a classic dish of South Africa, best described as a sweet version of Shepherd's Pie. It's beef mince seasoned with a spice mix and sweetened with sultanas and mango. On top you have a creamy, custardy sauce."

We say: A sweet main isn't for everyone, but we loved it

We understand why some people find this sweet mince dish challenging, but we were immediate converts. Bobotie is warming and comforting thanks to its spoonable texture, and the balance of sweetness with a slight spice heat. It's the kind of dish that will give you a lift on a rainy day. 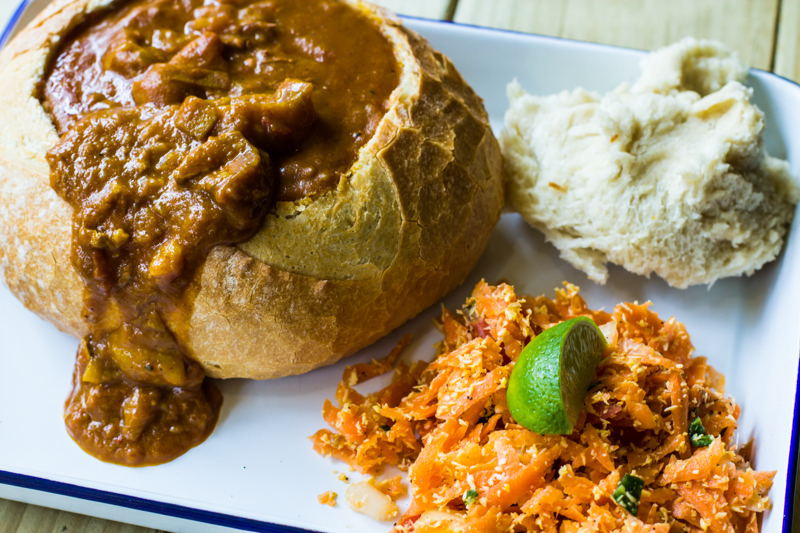 They say: “It's basically a curry sandwich”

“People think it's rabbit stew, or a green salad, because that's what bunnies eat. It's actually a Chicken Malay curry in a hollowed-out chunk of bread. Bunny chow is a street food in Durban – a South African city with a big Asian population. People pack their curry into the bread in the morning, put the top back on, and take it to work.”

We say: More of a sit-down meal than a sandwich

This is a very substantial dish – healthy and filling. Chris makes the curry from scratch (he does a vegan one, too) and they bake the bread daily so it's always super fresh. The carrot, coconut and chilli salad is an excellent palate cleanser. A must-try. 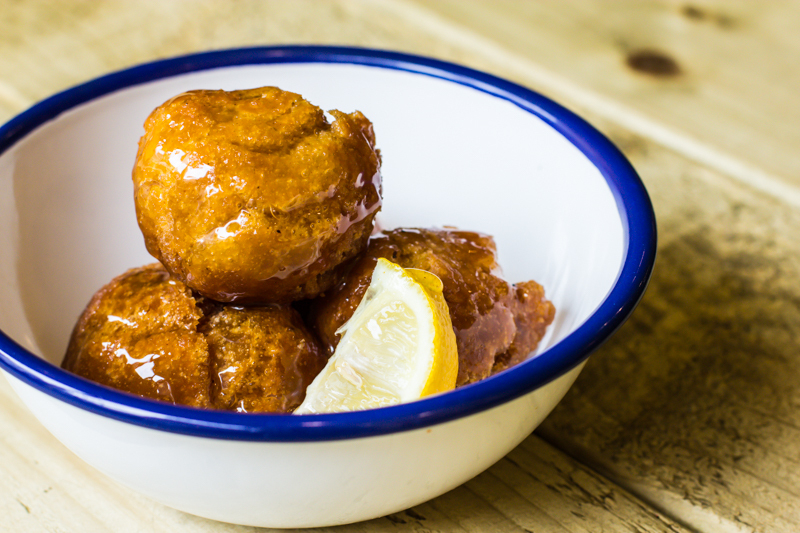 They say: “They're amazing with coffee”

“It's a doughnut-style dough dipped in a cinnamon and lemon syrup. You can get a bowl to share but you might end up fighting over the last one.”

A warm, gooey, juicy ball of fried dough that tastes somewhere between a French crepe and a bag of fairground doughnuts. They're very, very good. If you're going to treat yourself to something sweet, make it this. 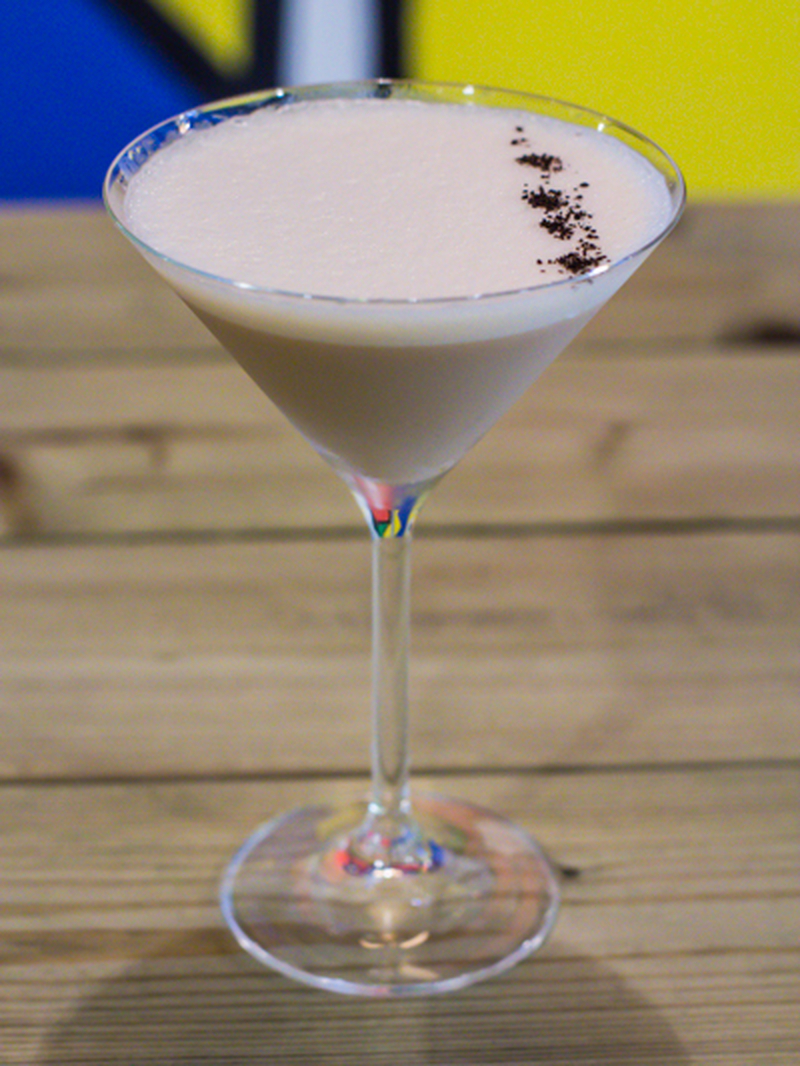 They say: “It's like a South African version of Baileys”

“This is made from the fruit of Marula tree. Elephants get drunk on it when the fruit ferments in their trunk. That's why there's an elephant on the bottle.”

We say: End your meal on an Amarula-on-Ice

We've never seen a drunken elephant but perhaps they just hide it well. This creamy liqueur is lovely on its own, and we'll be back to try it in their Rooibos Martini cocktail, which they say is a real one-off. (Like everything else on their menu, then).

Chakalaka Kitchen and Bar is at 105A Oldham Street, opposite The Castle Hotel. Find out more.