It's a fine addition to Friday nights in the city, a lively booster for people looking for a filler delivered with a bit of verve.

There were a few initial 'teething issues' as people remained queuing outside while organisers scurried around trying to resolve power issues, "One of the vendors brought way too much kit and blew the power," said Will Evans, co-organiser of the event. "But we're getting all that sorted in time for this Friday."

Fortunately, both power and order were soon restored as people streamed into the wonderfully cavernous late-1870s Victorian Upper Campfield Market Hall on Deansgate (opposite the Hilton) to begin some heavy gurgitation.

"We're also going to pull some more seating in," continued Evans, "We've currently got seats for around 350-400 bums at any one time, but we counted over 1000 people over five hours this Friday, so we'll be upping the seating over the next few weeks.

"The feedback has been tremendous, we expected the vendors to be dishing up around 250 potions each, but some did as many as 380." 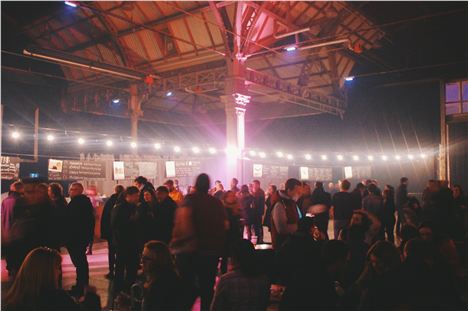 Franco, co-owner of Solita restaurant, one of a dozen vendors at the event said: "Due to a power overload all traders mucked in and shared equipment and sockets, there was a real 'blitz spirit' to get the doors open as we knew there was an eager crowd waiting outside.

"For us it was a big success, so much so we'll now be taking part in another three of these events where we'll bring out our famous Solita Parmo.

"Our biggest seller was the Big Manc Junior, but it was great to see our ex-head chef Jason of LoveFromTheStreets do so well. He smashed it."

Andrew Nutter of Nutters Restaurant in Rochdale said: "We've been blown away by the feedback, never having done this kind of street food event before we managed to translate Nutters food over to street-level fantastically.

"It's a great new event for the city. These events always start with hiccups, but that's half the fun, the energy and the enthusiasm of the place was amazing. That's what we thrive on at Nutters."

Confidential loves the idea behind Food Fight and hope it goes from strength to strength. It's a fine addition to Friday nights in the city, a lively booster for people looking for a filler delivered with a bit of verve.

Read our pre-launch interview with organiser Will Evans here.