Food for all – Could we come out of this with a bold plan to combat hunger?

This pandemic has shown how communities can effectively redistribute food, but what happens next?

The National Food Service is a campaign group with food hall branches across the country. Expanding that network, they say, will be instrumental to tackling hunger post-lockdown. Instead of expensive restaurants for some and food banks for others, could we have a food service for everyone?

Even before the pandemic, it was clear the food system wasn’t working. While 41% of low-income families lived in food insecurity, 250,000 tonnes of food was binned each year. However, COVID-19 has shown us that swift and dramatic change is possible. We could come out of this with a bold new approach.

When the pandemic ends, we’re going to need each other more than ever

The National Food Service (NFS) is a campaign group, aiming to create a public food service from the ground up. For some time they’ve been building a network of social eating canteens across the country to combat hunger, loneliness, and help meet carbon targets by cooking food more efficiently. Their canteens are run autonomously, with branches in places such as Sheffield, Bristol, and Nottingham. They were in the process of setting up a Manchester canteen when the pandemic struck.

In response to the crisis, most NFS canteens have converted to delivering cooked meals and were advocating for emergency support for organisations tackling food insecurity. The Bristol branch has delivered nearly 3000 meals in the last three weeks, and they’ve been able to track where those meals are going. Their Mutual Impact web app is helping groups build up empirical evidence to show the effectiveness of mutual aid. They’ve made huge strides with minimal resources in a short space of time, but they need to do more and also think to the future.

When the pandemic ends, we’re going to need each other more than ever. Canteens for social eating in every neighbourhood could dramatically improve how people eat in this country. This would involve a free or low-cost meal in a welcoming and vibrant local space, where people can sit down to eat with their families, neighbours and friends. Food would be provided at the price it costs to make and with minimal stress. FoodHall in Sheffield, one of NFS’s most established branches, has shown that social eating spaces can balance the books by using food that would otherwise be wasted. They use donations of surplus food to cook communal meals on a ‘contribute-what-you-can’ basis, whether that’s with time, skills or money. These are also run by people who volunteer and eat there. This way of operating is successful, not just for getting food to people, but also for building community organically.

A national food service isn’t a question of practicality, but one of will. We’ve had publicly-funded social eating spaces before - National Kitchens were once found in most neighbourhoods across the country. One in Manchester fed 3000 people a day in 1918. They offered anyone a nutritious meal in a communal setting, not as charity but as a public right. Politicians at the time recognised that National Kitchens were essential to meet the challenges of rationing. Although there was talk in 1918 of making them a ‘permanent national institution,’ unfortunately the scheme ended in peacetime due to political factors and opposition from the catering trade.

Now we need to make access to good food a right once again and into the future. Greater Manchester has the opportunity to pioneer a new approach to food justice, one that meets the scale of the crises we currently face. Our combined authority (GMCA) covers over 2.8 million people, including some of the most deprived areas in the UK. We have a strong history of solidarity, of supporting each other through cooperation and mutual aid.

An ambitious project, however, needs communication and infrastructure to grow. MPs including Olivia Blake and Rebecca Long-Bailey are already calling for a nationalised food service. Andy Burnham has been very vocal in his support of worker cooperatives - this is a great opportunity to put those words into practice.

A GMCA-backed initiative could give support to the mutual aid groups already running community kitchens in their neighbourhood, as well as make it easier to start a new canteen. Regional coordination could bring even greater economies of scale, with savings from bulk purchases passed onto canteens. It could give infrastructural support, flagging up empty council buildings or shopfronts. A regional food service could work with GMCA to procure food from local cooperative producers like Manchester Veg People, allowing that model of worker and ecological justice to grow. 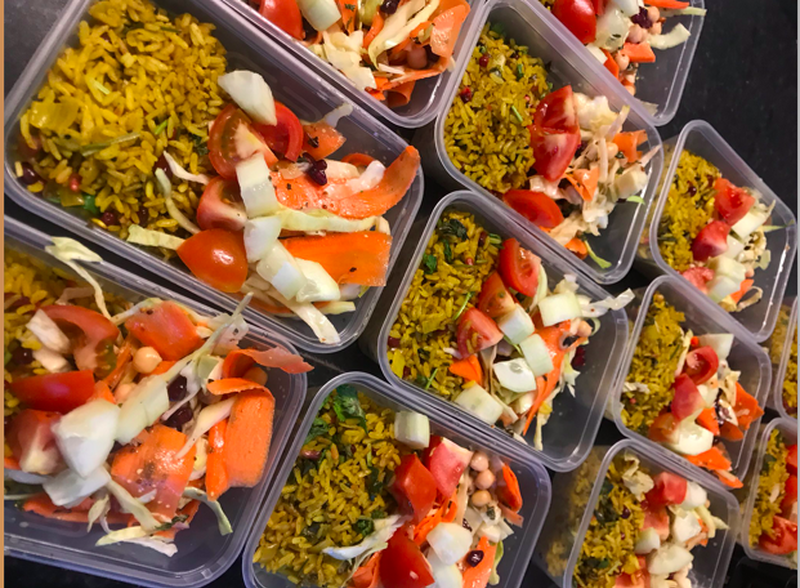 People are likely to respond to crises with mutual aid whatever happens, but GMCA can help ensure that, as a region, we make the most out of this recent wave of grassroots solidarity. By proving the relevance of a regional food service we could make the rollout of a national food service far more realistic.

The pandemic has shown us that the way services are run can, and must, be different. We don’t have to accept hunger and loneliness. We can be bold and develop a truly resilient food system for the future.

If you’re part of a food justice project, or you and a couple of friends want to start one, sign up on the National Food Service website and join in.

Community groups feeding the vulnerable in Manchester include:

Manchester’s top eating out offers, deals and discounts: December 2022
What you say
Read Next
● / Arts

This is what goes into a proper good burger
● / Features/Opinion