I’m something of a cautious out-of-the-house steak eater. It truly is one of those things where you can do it just as well yourself, for a fraction of the price. Salt, room temperature, a very hot pan, butter at the end, that ridiculously simple yet effective finger test and a good resting period - I mean, who fucks up a steak?

The carpaccio, however, is the stuff of nightmares.

Of course, a specialist place will offer rare breeds, an expensive grill, some knock-out marinades and absolutely perfect cooking – but I search for them with immense care and due diligence because, well, steak ain’t cheap. And in my meaty, meaty world, a bad steak is akin to a Greek tragedy and believe me: I do a great melodramatic wail.

So, it was with an air of trepidation that I rocked up at Etci Mehmet for lunch the other week, a Turkish steakhouse with an atrocious video background on its website of a Salt Bae-alike being professionally unappealing. Now, there’s little point trying to sum up the awfulness of Salt Bae when Jay Rayner has already hit the nail on the head, but suffice to say, the only thing worse is a knock-off imitation next to a car park in Manchester.

From the outside, Etci Mehmet looks like a Caribbean tourist trap, but hey, it’s clean inside, the lighting is just the right level of low, and there’s a massive meat counter laid out in the middle of the restaurant, market-styley. We catch a lady unawares – she asks us why we’re there, but then promptly shows us to our table where we’re greeted by a man sporting a disconcerting mix of black gloves and knife skills. He’s an excellent server, by the way. It’s quiet but that hasn’t stopped them banging out reggaeton and the kind of poppy dance you might associate with an Irish pub in Marbs, Doobs, or one of the other holiday destinations with cringey nicknames.

The menu is pretty comprehensive, including random stuff covered in gold leaf à la aforementioned Salty Boi. Gold-covered giant meatball for £100, sir? And for the lady, a £40 gold burrata? Fuck off. I’m aware that most of this is personal preference and that some people will of course be wowed by gold food and salt being dropped over their laps from a great height. However, the first universal red flag comes just after we place our order and I ask where they source their meat from.

Now, I don’t care who you are - provenance is important. Welfare, the environment, food mileage, supporting local – these aren’t matters of opinion or preference, and they are certainly things that customers deserve to know. If this hadn’t been a review, I would have thanked him and walked out.

But it is, so we don’t. On to the food then, eh? The Turkish sausage is smokey and pleasingly textured but unnecessarily served on a skewer with an overly large, dry hunk of bread and sad-looking pieces of pepper and tomato. The bread in particular could have done with being half the size, fresher, and utterly soaked in olive oil. There’s also a snazzy spray of balsamic, which adds nothing to the plate. The carpaccio, however, is the stuff of nightmares. Grey on the edges, watery on the plate, unevenly sliced and completely under-seasoned – has it been defrosted?! The obligatory parmesan has a confusing level of un-saltiness to match.

We hurry through as much of it as we can, then wait for the main event to arrive. So far, everyone who has ordered a steak has received a visit from our gloved amigo, armed with flame thrower, sharp knife, and crooked elbow. But, inexplicably, our turn never comes. Instead, we get our steaks, then sit and wait patiently until the lady from the entrance turns up and says, “Do you want it cutting?” then rolls her eyes when we respond in the affirmative. She doesn’t do a particularly neat job of it and there’s no salty flourish, no quick flame thrower to melt the hunk of garlic butter. Instead, we’re left to spread it awkwardly over the top of what turns out to be steak that’s the wrong side of lukewarm. Isn’t that their whole shtick though? What did we do wrong? I find myself longing for the crassness of it.

A few words on those steaks – no depth of flavour whatsoever; no nuttiness, cheesiness, no real anything. Fine, they’re served exactly as we asked (one rare, one medium-rare) but it’s pretty clear that this is not the quality of meat to match the price tag. The truffle fries are decent, but the regular skin-on fries have been lazily sprinkled with some kind of toxic-tasting spice mix which has only found its way onto about three of the chips, clinging to them for dear life while leaving the rest naked and a bit sad. They’re fine though, whereas the broccoli is completely inedible – every springy bite releasing water, no crispiness, no seasoning. The kind of flabby affair that instantly takes you back to 1980s school dinners. We have a couple of very pretty non-alcoholic daiquiris on the side, providing us with the syrupy dose of energy we need to get through.

We digest for a few minutes before ordering baklawa to finish, though I’m really not sure why. I’ve mentally decided it’ll be dreadful, but then something unexpected happens. Our knife-wielding man brings it over and proceeds to leave us with the long-awaited theatrical flourish – a cut lengthways, an ice cream spread, choppy choppy like it's made of beef and a piece dangled into my mouth on the edge of a blade. And you know what else? It’s absolutely superb. All honey, light flaky pastry and a pleasing contrast with an almost semifreddo layer of vanilla ice cream. It’s honestly as good as any baklawa I’ve ever had.

But despite leaving with a sweet taste in our mouths, the overall experience was considerably sourer – I’d call it a gratuitous exercise in style over substance except there wasn’t much style either. It was all a bit tired, formulaic and low on quality. Get yourself to Herd NQ instead. 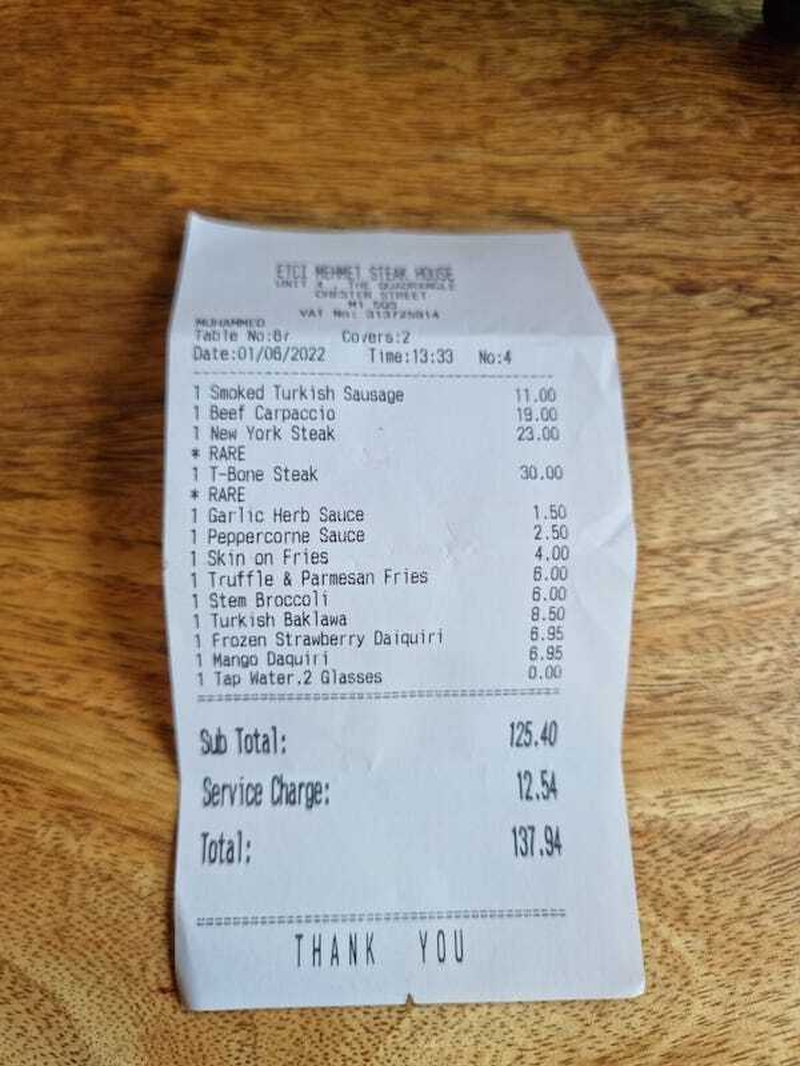