It’s lovely in summer under the maple trees watching the infrastructure at work. There’s the Trafford Centre tram trundling past. Oh and look, there’s the X50 double-decker bus and here comes an International Timber artic, followed by a Stobart truck. And in the trees above there's a chaffinch.

This place doesn’t have a fake industrial ‘Manchestoh’ theme, it’s the real deal

I’m a big fan of the curious and the eccentric, and Six Trees Kitchen & Bar in Trafford Park is one of the most eccentric food and drink places in the Manchester area. It sits between Village Way and Trafford Park Road, an oasis in a desert of warehousing, haulage and engineering.

Although I never think of Trafford Park as a desert, I love the sheer buzz of energy here. You can almost feel the tens of thousands of jobs. All that work pulsing around you.

Cycling through Trafford Park I find strangely stirring, although there’s never really been a place to stop for a drink since the epic Trafford Park Hotel closed its grand doors decades ago. Six Trees has changed that. Especially for truck spotters. And people who like breakfasts and maybe a bit of live music at weekends.

The food is simple. On the first visit I had a halloumi burger (£6.95) and very good it was too. Thick chunky halloumi in a brioche with the smashed avocado and the tomato and sweet pepper jam adding vital interest.

N’duja croquettes (£5.95) were very good as far as n’duja goes. Nothing wrong with the prep or the presentation or indeed the flavour, the only wrong thing was me in picking them as I generally don’t like n’duja no matter how I try. N’duja is frequently described, and delightfully so, as "spicy, spreadable pork sausage", but for me it's more a case n'don'tja rather than n'duja.

The all-day full breakfast (£8.95) is great. Streaky bacon, mushroom, tomato, fried egg (other egg choices are available), sourdough, all just right, plus a spicy sausage patty that lent that little bit of originality to help things along. I didn’t go for the smokey Heinz beans because while I prefer them to n’duja I object to them on my breakfast plate. All in all though this is one of the best breakfasts in Greater Manchester.

But the food is only part of this place. The whole venture is a proper story. Six Trees Kitchen & Bar is an offshoot of GVE Pumps which doesn’t manufacture "sneakers" as the Americans say, no, we’re talking industrial vacuum equipment. And it does that right here on this site.

GVE had spare land to the east of its premises so it put down an ocean of decking and then built a kitchen and bar area. It was all done in-house. The marvel is the lovely steel of taps and pipes dispensing the beer in the service areas. These were fashioned 10 yards away in the machine shop.

There are plans for extra space areas in containers to the north, a large events space, a roof terrace - meanwhile, a pizza oven is currently being built, again in house. An old machine drill from 1911 is being converted into a water feature. The whole place is outdoors with a heated canopy coming soon. The toilets are in the main office through a keypad door but dedicated ones are on the way. It's a work in progress and all the more fascinating for that.

There are already weekend DJs and musicians performing here when Six Trees opens into the evening. Apparently behind the present space GVE are creating a large capacity event area for bigger gigs and shows.

Sam Oliver of GVE and his partner, Tasha, are the people behind it all. Sam marks his roots with an IPA named after his grandad, Harry, who built the company. It’s a good pint too. As for other drinks, there are a lot of other beery choices and four white and four red wines (a good Merlot) plus cocktails, spirits and shots.

If you want to go for a stroll then there’s the spectacular if abandoned Edwardian-period Trafford Park Hotel nearby, proudly displaying globes on the facade to show that Manchester’s trade was/is worldwide. A few steps away is the weird yet not without charm St Anthony’s church made out of corrugated iron. There’s a little terrace of red brick shopfronts too and all the streets are named as though we’re in America such as First Avenue, Second Avenue and so forth. Humble First Avenue, Trafford Park, is a fine parody of its New York cousin.

Six Trees Kitchen & Bar is as unlikely a place as we'll review in 2021. Its strange location, with all that transport flying by, has the air of an urban port. Its huge terrace has a whiff of one of those roadside bar/cafes you pass in Italy or Spain. There's no excuse for not giving it a whirl either. The Village Metrolink stop is more or less right outside the place.

The fact it's an adjunct to an engineering shop gives it a splendid industrial flavour that seems to reach back to the origins of the city. This place doesn’t have a fake industrial "Manchestoh" theme, it’s the real deal, and the only bees present are alive and occupying the six trees with those chaffinches and other beasties. 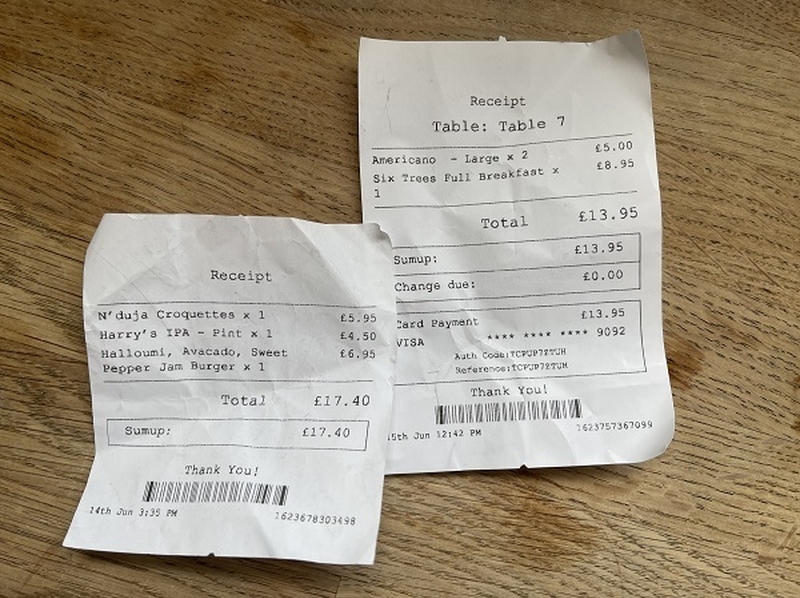