'This is how the machines win' - Ducie Street Warehouse, reviewed

Ducie Street Warehouse, situated appropriately enough in an old warehouse on Ducie Street, is very much the definition of a “space”. The entire ground floor is given over to a bar and eating area, with an outside terrace. There’s a gym somewhere, and a small cinema.

The espresso was strong and boozy - so strong that three days later I still haven’t slept or stopped tapping my foot.

There are booths and tables filled with bearded men wearing caps at laptops, while beautiful people walk around holding tiny dogs. A DJ plays records in the middle of the room - despite it being 7pm on a weekday when I visited. Maybe this is where the Northern Quarter crowd moved to when the rowdy lads in matching shirts took over? Squint while peering through your fingers and you could be in the Bowery in New York or someplace I’ve never been to but read about in Conde Nast Traveller.

Some of the beautiful people walking around were staff. They looked very harassed, carrying large bowls of food over to a private party. As a result, it took a few minutes to grab someone’s attention. I was told we could sit outside or inside, which certainly seemed to cover every base. As quickly as she had appeared, the hostess, or waitress, or bartender, or creative space leisure technician, or whatever she was disappeared.

We eventually found our way to a table. There was no menu or waiting staff, only a QR code and an app listing all the food and drink options. This is dining 2.0, a post-COVID development, where necessity has been hijacked by greed. Restaurants have realised you can serve three times the number of customers with half the staff. Speed to the detriment of service. This is how the machines win, people. Not through gun-toting, skeletal robots ushering in nuclear oblivion like in Terminator, but by slowly chipping away at our morale through the erosion of traditional customer service norms.

The menu offers small and large plates without any overriding theme or flavour profile. Usually, when ordering like this, a server explains that the food comes out as it’s ready, as opposed to all together, and we nod along pretending that the haphazard bullshit is acceptable. But not at DSW. With no one to explain the menu, everything we ordered – and we ordered everything – unexpectedly turned up en masse; an overwhelming barrage of food and plates

Chilli, sesame and gochujang chicken, with chilli and miso dip (£9.50) was as good a place as any to start. Crispy battered, filleted chicken in a sticky, sweet and spicy sauce. The fancy description doesn’t hide the fact that it’s the sort of dirty, tasty snack you crave after a few drinks.

The charred, double-cut pork chop with mango and cucumber relish (£19) was listed as a big plate. This seemed to mean that it was the size of the small plate but inexplicably cost £10 more. If you’d ordered that on its own, you’d have been furious. But lost among the other dishes, it’s impossible to keep track of price and classification. And given how good it was, who’s honestly arsed? The fat was crispy and burnt, the meat tender, the relish refreshing and clean.

The salt and pepper calamari, chive and roquito aioli with lemon (£9), were perfectly cooked. Not at all chewy, like a fishy elastic band. It was so good I didn’t bother with the dip. Likewise, the grilled king prawns, in chilli and garlic butter (£10.50), were meaty and tasty, and the balance of flavours was perfect - the chilli and garlic punchy without being overpowering.

The standout dish was Lancashire hotpot croquettes, served with a jug of lamb gravy (£8). Deep fried and crunchy on the outside, with tender lamb and potato inside, and a thick, meaty gravy. A reminder that despite your surroundings, and the mango and cucumber relishes and roquito aioli, we are in Manchester, and that’s worth celebrating.

Baby chorizo with almonds and peppers (£5) were possibly the only disappointment. Served in a thick, smoky and sweet pepper sauce, for some reason they just didn’t land. I usually love chorizo, but the sauce was cloying and smothering. Likewise, ‘Nduja Pinsa (£14), a flatbread pizza, was just ok. I guess there’s only so much you can do with dough, tomato and cheese, but when everything else popped and sang, it felt underwhelming.

For dessert, there was an espresso martini tiramisu (£8) with cream so thick I could have skied over it. The espresso was strong and boozy - so strong that three days later I still haven’t slept or stopped tapping my foot. Tiramisu purists will scoff at it, I just scoffed it.

As we were finishing eating, they cranked the music up a notch. The DJ started playing music by Sean Paul, and inexplicably the Thong Song by Sisqo. In a different mood, I think the knowing hipness of DSW would have enraged me to the point of violence, but as it was I thoroughly enjoyed it - the openness of the space, the bustling atmosphere. The food was good, but I don’t think I would return for a big meal. Social eating, as they describe it, may sound like a wanky buzz-word, but I think that’s about right. Ducie Street Warehouse is a great place to meet friends, drink, and have a few small snacks. If you’re looking for a traditional dining experience then you’ll be disappointed. But if you’re under 30, own an Apple phone, and know how to transfer large files across the cloud, then I think you’ll get a real kick out of it. 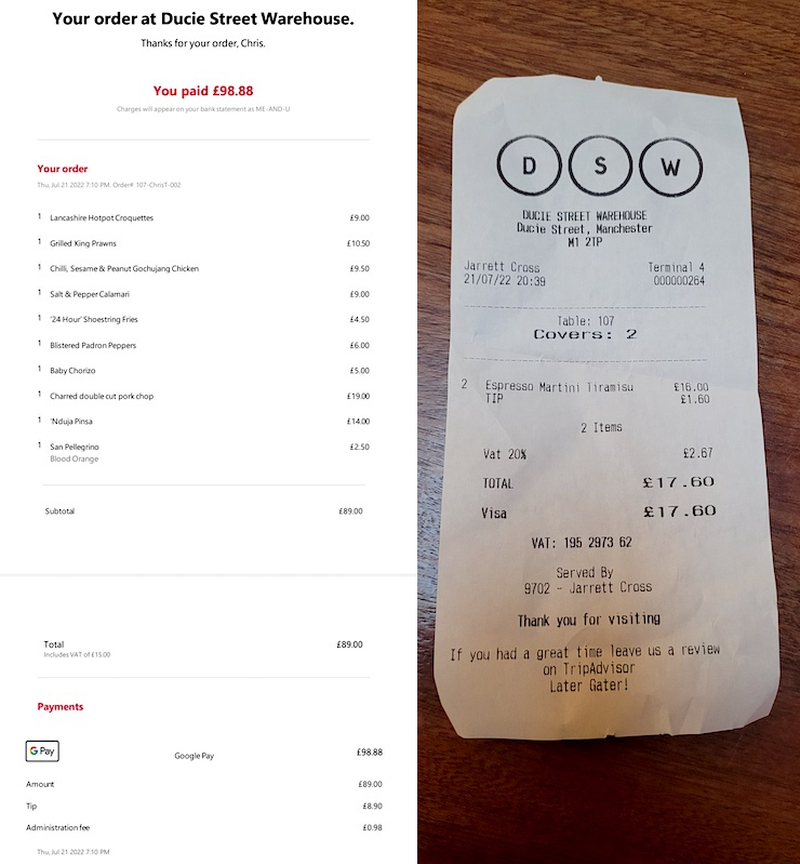