'These are the dg's b'llycks' - Doner Summer @ Yes, reviewed

The person behind the counter doesn’t know the answer when I ask what is in the pink aioli that makes it pink.

Yes is a petri dish for eccentrics, thinkers, rebels in kohl eyeliner - and these days, many of those bohemians are vegans

I’m simply curious about why it’s pink. Is it ketchup? Is it beetroot? Is it the leftover vinegar from making pickled red cabbage? Is it pink food colouring (hopefully not cochineal)?

Answers on a postcard.

The vegan kebab menu above the counter at Doner Summer offers a choice of two types of bread: Khobez wrap or garlic and coriander flatbread. I ask for my boyfriend’s Berlin kebab on Khobez.

“What?” says the person behind the counter.

"Khobez?" I try again with a different /kh/ sound, questioning my pronunciation.

They come around to the front of the counter to see what the hell I’m saying. They read their own menu and go, "Ohhhhh!"

I daren’t ask what’s in the mock chicken or mock doner meat but my unholy farts during Louis Theroux on the couch later sound like they’re saying, "Seiiiiitaaaaan".

Following my visit, a bit of internet research throws up a seven-page PDF of allergen information for Doner Summer's food - but I'm still none the wiser about the actual ingredients.

I head back to my table past the angry queue that has formed behind me while I was interrogating the poor, harassed kebab wrangler. My boyfriend asks what I did to them and rolls his eyes. I watch the open kitchen as a member of staff stuffs their face behind the counter. I’m not expecting much.

At Yes, you're given a buzzer that goes off when your order is ready. When I go back to collect the food I tell the flustered object of my earlier questioning that the food looks great. It really does. They thank me for the compliment but still look a bit stressed. “Are you ok?” I ask. They’re not. There’s been a power cut, everything’s gone wrong, they’re having a bad day (and they're not even supposed to be HERE today!).

I feel bad for asking about the sauce.

Doner Summer is a Leeds-born vegan brand that started popping up at Yes during 2020 and has outlets in Huddersfield, Hull, Sheffield and York too. When I wrote about fellow vegan junk food pedlar Frost Burgers, I asked the friendlier of the members in the Manchester vegans Facebook group for advice: where should I go that's better than Frost and might win me over to the joys of vegan junk food? Doner Summer came up again and again. Its core menu is based on Berlin's kebabs and it does a line in the very popular American import tater tots too. Napolean Dynamite would love it.

I love a pun and I love Yes, so why not? Yes, just off Oxford Rd near the Lass O'Gowrie, is an achingly cool music venue and bar. It plays host to hot bands like Yard Act, Yves Tumor and PINS in its sticky-floored basement and Pink Room venues. I love it for its brilliant gig calendar, relaxed vibes and well-dressed clientele. It does decent, not too pricey beer too.

Someone on the next table has Johnny Thunders hair, a flowery jumper and a polka-dot necktie. I feel like I’m back at college in the late 90s swooning over androgynous, arty boys and girls. My long-term boyfriend, accustomed to my endless flirting, rolls his eyes again.

Yes is a petri dish for eccentrics, thinkers, rebels in kohl eyeliner - and these days, many of those bohemians are vegans. So the food offering works, though there’s decent pizza here too if you’re a staunch dairy devil.

Is the food any good though? Yeah, actually it is.

I remember when a vegan kebab meant some chips and salad in pitta bread. These days, they're big business. I've tried a few modern vegan kebabs though and often it's the salad bits that let them down. Which is odd for a movement focused on "plant power". Not so here and that's why I rate it.

If I have to be picky (and I kinda do), the fake chicken on my Bad Gal Kebab (£10.95) and the "buttermylk fried chick'n" (£8.95) is a little too bouncy in texture, though the seasoning on the fried chicken is bob on. I do wonder why removing or changing vowels from words apparently removes their association with animal products but as vegan kebabs go, these are the dg's bllycks.

The thinly shaved fake doner meat which makes an appearance on both my kebab and my boyfriend's Berlin Doner Kebab (£8.95) is plentiful: satisfyingly meaty textured and deeply spiced with cumin. The bread on both is decent and there is a ton of crunchy, spanking fresh salad, pickles, hot sauce (scotch bonnet apparently but it’s not as hot as you'd expect from that chilli) and that mysterious, zingy pink aioli.

These kebabs have got the colour, the texture, the taste, the vitamins (praise the lord) and the portions are huge. They taste really good and soak up a few pints beautifully.

Will they tear the packs of barking pissed-up lads lads lads away from their greasy, shaved meat twizzlers a few hundred feet down the road? Probably not. Are they fresh, appropriately spiced, filling and free from the unwelcome side dish of factory farm guilt? Yes, yes, yes. I would prefer some real cutlery instead of the plastic knives and forks we have to eat with though. Why do the vegan planet-saving credentials have to start and end with animal products?

I eat my dinner while reading comments on the vegan Facebook group accusing me of hating vegans for daring to suggest it’s not a lifestyle for everyone. I'm also accused of being bi-phobic (and assumed to be a man) for a silly joke I (a bisexual woman with a sense of humour) made about the allure of pork.

How do I feel about that? I feel love. Life’s too short for anything else - and I have to get a Donna Summer reference in somehow. 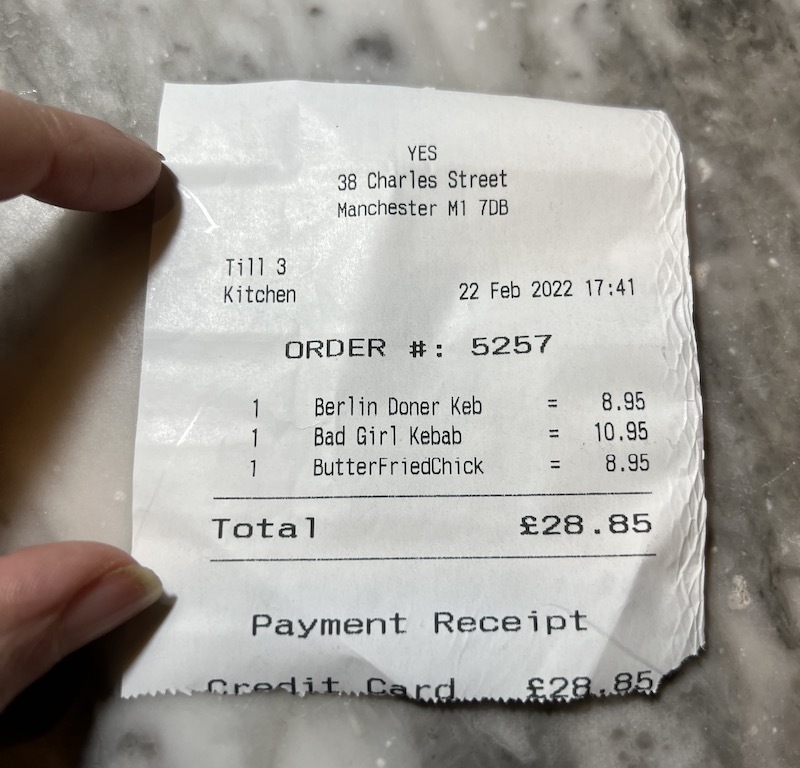