‘Publicity, queues and bacon naans - but could it ever match the hype?’ - Dishoom, Bridge Street, reviewed

You’re unlikely to hear a bad word said about Dishoom in the local press. That’s only partly because it’s good. The other reason is because the team behind this colonial-style Bombay café group invited a clutch of Manchester food writers down to London recently and spent two days stuffing them full of curry and compliments. I like to suggest I’m impervious to such things so I can remain an unbiased paragon of truthful reporting, but I wasn’t invited.

Curry for breakfast is one of my favourite things... I have no idea why this hasn’t caught on in the West

Dishoom have a particularly in-depth brand story and they are keen to make sure that people not only understand it, but buy into it. But although the restaurant brand has been manicured to within a centimetre of its life, it still manages to avoid appearing too contrived.

In brief, Dishoom is attempting to capture the all-welcoming, casual elegance of Bombay’s traditional (but disappearing) all-day Irani cafes, which fed everybody well, from boot polisher to baroness, from colonial times onwards. For that to work, they need the right setting - a bit of wood panelling, some stained glass and walls steeped in a few hundred years of genuine history.

Dishoom so far have five restaurants in London and one in Edinburgh, but it’s taken them a while to find the right Manchester venue. They seem to have landed on their feet with a deeply set space within the old Freemasons Hall spanning a reception area, air thick with smoky incense, which leads on to three elegant dining rooms and a bar. Framed portraits allude to the connection with the District Grand Lodge of Bombay.

The restaurant is both grand and casual, providing a decent backdrop for anything from a board members breakfast meeting, to a first date, or a pit stop between shops. Same with the menu, which works just as well for a solo treat in a quiet corner to an all out curry feast.

Curry for breakfast is one of my favourite things and Dishoom have built a reputation for theirs. I have no idea why this hasn’t caught on in the West, where folk prefer to ruminate on cereal (as joyful as chewing a gravel drive) rather than carpeing the diem with natural endorphine-producing stimulants such as chilli and ginger.

I was there for lunch, but have pledged to return before their 11.45am cut-off for their legendary bacon naan roll, or the Parsi protein power breakfast of keema per edu; spicy chicken keema, chicken liver and fried eggs.

We tried to pick one thing from more than half a dozen sections on the menu, and there’s enough of a selection to be able to do that a few times without repetition. It’s all small plates, delivered as and when they’re ready. You know the drill.

Chole puri (£9.50) was described as ‘an inexpensively agreeable lunch for one’, and I’ll definitely be sneaking out of the office soon to have this again. A thick, darkly spiced chickpea curry (the heat of which gently increases with each spoonful) accompanied by sweet halwa, pickled veg and a wedge of lemon, all providing a zesty ying to the hefty yang.

Paneer roomali roll (£7.20) was a more than decent vegetarian wrap of special ‘handkerchief’ bread lined with spinach – filling, but without that lumpen heft you often get with similar mass produced grab-and-go meal deal versions.

Chilli cheese toast (£3.70) with melted Cheddar and green chilli on white bloomer was simple, but has ruined the non-chilli version for me forevermore. Crispy chilli chicken (£5.90) is an Indo-Chinese crossover involving the punchiest flavours from both cultures. You could spend hours picking through a bucket full of this before getting tired of it.

Spicy lamb is sold by the chop (£4.30) infused overnight with aromatic big-gun spices, ginger and garlic, and blackened by the grill. If you’ve tried it once, it’s likely you’ll re-order it on every subsequent visit.

House black daal (£6.20) is a signature dish, cooked slowly over 24 hours. It’s creamy and comforting, but not that far removed from the world’s best selling cream of tomato soup, with bobbly bits in, so let’s not get too carried away.

Mattar paneer, from their so-called 'Ruby Murray' selection has to be the alpha of vegetarian curries. It’s rich, generous, comforting, popular and good for you. I didn’t know whether to eat it or marry it. A fresh kachumber salad (£3.50) of crunchy cucumber, onion, tomato and fresh coriander cut through all the velvety thickness of the pulse-laden curries and slow cooked tomatoey richness.

I was now so stuffed full of slow digesting, low GI elements that I didn’t actually need to eat again for the time it would take to make another black daal from scratch.

I enjoyed Dishoom, but while on the subject of Bombay's fading Irani cafe culture, let’s not forget Manchester's own Northern Quarter curry caffs, sprung from our textile manufacturing heritage, and the need to cater for Indian and Pakistani rag trade workers with cheap, delicious, home cooked curries. They’re just a lot less frills, served canteen style with Formica tables and ‘budge up bench’ seating.

Dishoom shares similar core values, but obviously the whole experience is a lot more refined, with London prices to match, plus of course an added ‘optional' 12.5% service charge. 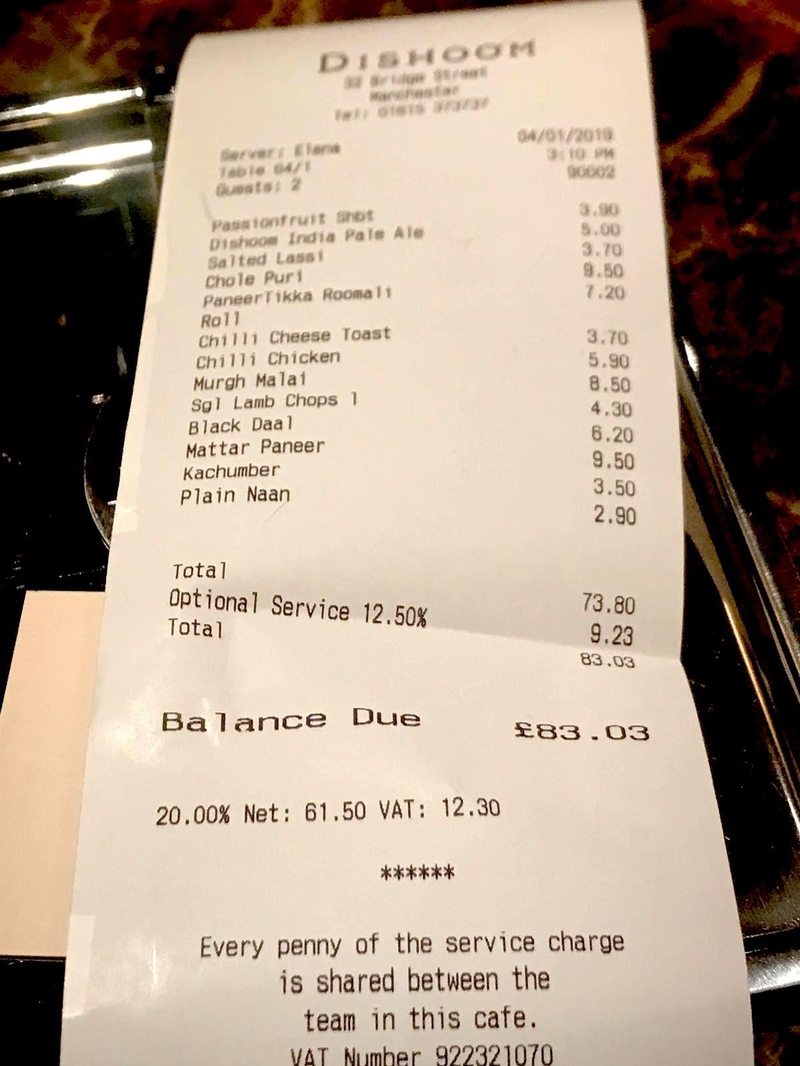