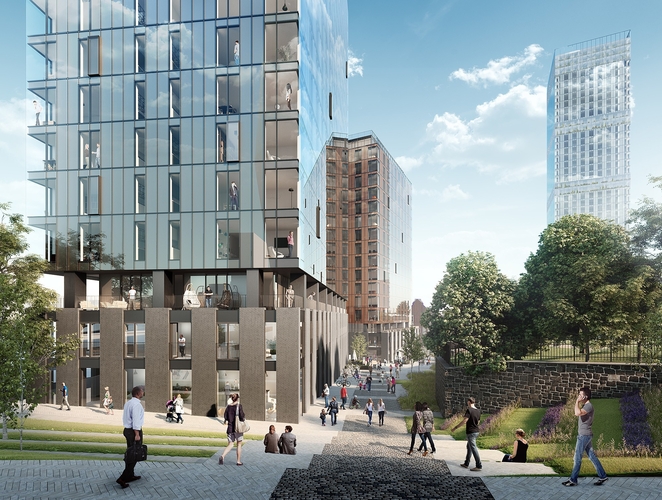 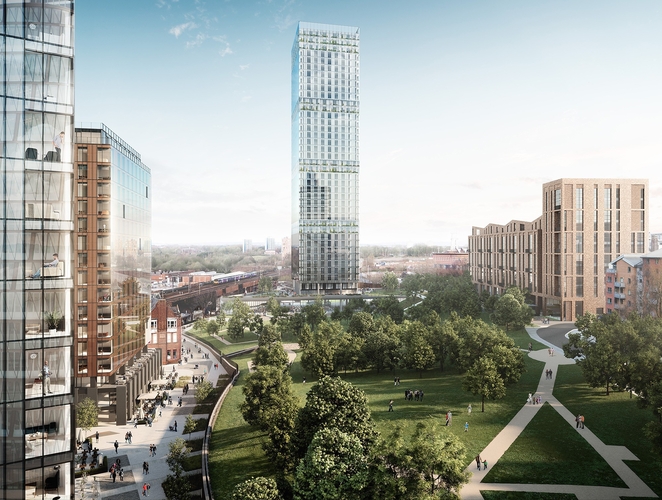 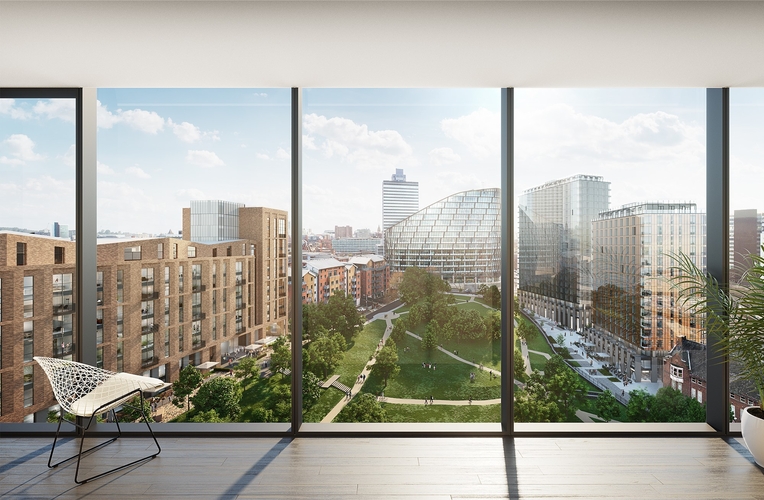 Plans include a 41 storey tower within NOMA neighbourhood

One of the most satisfactory aspects of Manchester’s recent development is how the central areas have expanded back into parts of the nineteenth century city which had become that dreadful catch-all ‘brownfield’. In the emptiness and wastelands left following sixties mis-planning and subsequent economic decline, towers and developments are now springing up.

No city wants wastelands around its core. Such places hint at a stagnant economy, of an area on the slide. But within this rush and rash of rapid construction are we getting quality as well as quantity?

The Far East Consortium (FEC) International Limited has now revealed designs for their first project in Manchester, in Angel Meadow.

It’s a biggy too.

To quote: ‘The scheme is a £200 million residential development comprising 754 homes across four buildings bordering Angel Meadow Park. It forms part of the city centre’s NOMA neighbourhood, which is extending the city centre northwards with a mix of commercial and residential space.

‘There will be five, three-bedroom townhouses on a ground floor building on Old Mount Street with 131 apartments above.  There will be a new route through the building, which is part nine and part 12 storeys, for residents from neighbouring buildings into the park.’

As the press release continues: ‘This will be a 41 storey landmark residential tower, which will include large two-bedroom apartments with winter gardens, designed with families in mind. The winter gardens are located every seven levels animating the tower into glazed stacked boxes. The building will have ground floor retail and leisure spaces with a new elevated park with direct links into the Angel Meadow Park.’

The good news is that the tower has been designed by that exciting Manchester practice 5plus Architects together with Planit-IE. It looks splendid as well. Slender, glass, light; a northern sentinel for the city centre to rival the CIS Tower, which has been performing that lonely role since 1962.

The flamboyant Jon Matthews of 5plus Architects has said: “It is clear from our early engagement with the local community that Angel Meadow Park is much cherished amenity and by developing new homes around it, we hope to see the area thrive.

“Our proposals give everything back to the street.  New connections in and around the park are created, older connections are enhanced. The buildings are designed to work as a family of modern homes around the meadow – reinforcing the sense of place.”

The locals, the very active and excellent Friends of Angel Meadow, however, are concerned about the bigger picture beyond this development.

They told Confidential: ‘The Far East Consortium proposals cannot be seen independently of other projects in and around the park which will significantly increase the population density. However, there are no plans for significant improvements in amenities. We struggle to get the bins emptied today. In 1844 when the same street layout was built to 2-3 storeys Friedrich Engels described Angel Meadows as "hell on earth"  -  in 2017 heights of 9-41 storeys are marketed as ‘neighbourhoods of choice’. Only time will tell.  But if we are to build truly sustainable neighbourhoods, and avoid the mistakes of the past, the needs and voice of the community must be taken into account. We remain hopeful.’

And there’s the rub. It’s clear in article after article on Confidential and in other media that people who live in the places affected by development want fully rounded communities to be created, and they doubt whether the present direction of travel will deliver that.

The language these citizen-groups are using is so far from the corporate speak and jargonising taking place at the property jolly, MIPIM, presently taking place in Cannes, it could be from a different planet. It’s hard to see how this canyon between aspiration and idealism on the one side and profit and realism on the other can be bridged.

Maybe it can’t, maybe each side is too firmly entrenched to ever really grasp the other side’s views.

Maybe it’s all about luck, about the spirit of the location melding with good architects and good designers to create a fully functioning neighbourhood. In this case the typically sunny renders of this Angel Meadow proposal might just deliver that. The two design practices involved seem to have the right credentials, and these proposals look far more like quality than just quantity.

Of course it’s about the small things as well. As the Friends of Angel Meadow note, the bins will have to be emptied no matter how bright the sun shines on these renders and, if they are built, their physical reality.

The designs for Angel Meadow are out for public consultation until 7 April 2017 and in addition to being available online there will be two public exhibitions of plans.