It’s a tough job opening a new restaurant at the moment. Manchester’s stricter rules don’t exactly make dining out relaxed or sociable, surely key ingredients. I was impressed that before we were even allowed to sit down at Cafe Delhi House we had to give our name and number, confirm that we were from the same household and have our temperature taken -  this has been far from my experience at most other places we’ve visited recently.

Some dishes a touch more experimental than Mowgli's across the way

All of this was done with a smile by our very friendly server Liv who struck me as the kind of person who’s good to have around in a crisis. Which I suppose this is, albeit one with Netflix and a world of home-deliveries.

The staff have clearly been rigorously trained and every one of the seven (at last count) who checked on us after we were seated, and then after each course like a procession of smiling marionettes, was perfectly pleasant. When one young woman came to ask if she could do a little dance at the table - as everything else had been covered by the rest of the team - it was a bit awkward, but we couldn’t help but be charmed by an eagerness that might have been grating had it not come with such warmth.

'A.A.C' (£5.50), a vegan dish of (warm) avocado and potato shaped into a neat disc, topped with mustard coloured sev and mottled with pomegranate seeds, was a surprising start. Its murky 70s bathroom suite hues didn’t quite whet our appetites but the flavours sang, reminiscent of proper Indian street food.

Our veg-based virtuosity stopped there as we got stuck into a couple of perfectly juicy sheikh kebabs (£9.50) with a cumin-dusted, roasted chilli and shallot raita - the spiciest thing we ate, yet still a bit tame for my taste.

Our third little dish was more left field: a duo of scotch eggs (£7.50) from the 'any time brekky' section (which I would be keen to return to, any time) made with lightly spiced chicken in lieu of sausage-meat and a pot of mustard mayo to dip. A pleasing bit of tit-for-tat culinary appropriation. There was quite a distinct lack of chilli heat overall but with the rest of the spice rack all present and correct. Maybe other dishes have more bite.

We neglected the back page of the extensive menu which features some of the more usual suspects; biryani, tikka masala, fish curry - although a pork vindaloo did intrigue us and might warrant another visit. Our server’s recommendation of Changezi chicken (£12.50) was a lusciously rich tomato and ground nut-based curry. It came with a miniature naan bread that we had to tussle over to scoop up the last of the sauce.

It was smaller than an average ‘main’ course but fine after a procession of other little dishes, so I would suggest ordering two or three mains to share between two people if skipping the ‘starters’. Add on a couple of extra sides too, if you're hungry.

Another dish from the 'heroes' section: Grilled trout (£15.95) served with an umami-fest of porcini, edamame, truffle and artichoke was a total curveball. An indication of the contemporary culinary approach the Lamba family, the restaurant's Delhi-based owners, want to bring to the UK.

A 'madras curry' sauce was advertised but what came was more korma-esque. It married well with its plate-mates but perhaps a spicier, tomato based sauce would have cut through the omega-rich, shell-pink flesh of the trout better. The fish was well-cooked and a decent two-fillet portion but came with no other accompaniments.

Sated but not stuffed, we enjoyed a tranche of palate-resetting floral, masala chai kulfi (£3.95) to finish.

Cafe Delhi House is a fun new addition to The Corn Exchange with plenty of interest left on the menu to warrant a return. Some dishes a touch more experimental than Mowgli's across the way but similarly slick and modern. It slots in happily in a city known for its love of Indian food, managing to be at once modern and authentic. It’s not a chain here - yet - but I wouldn’t be surprised if the empire expands quickly based on this strong start.

Read next: 'A neighbourhood restaurant with a soupçon of eccentricity' - Jitrada, Sale, reviewed 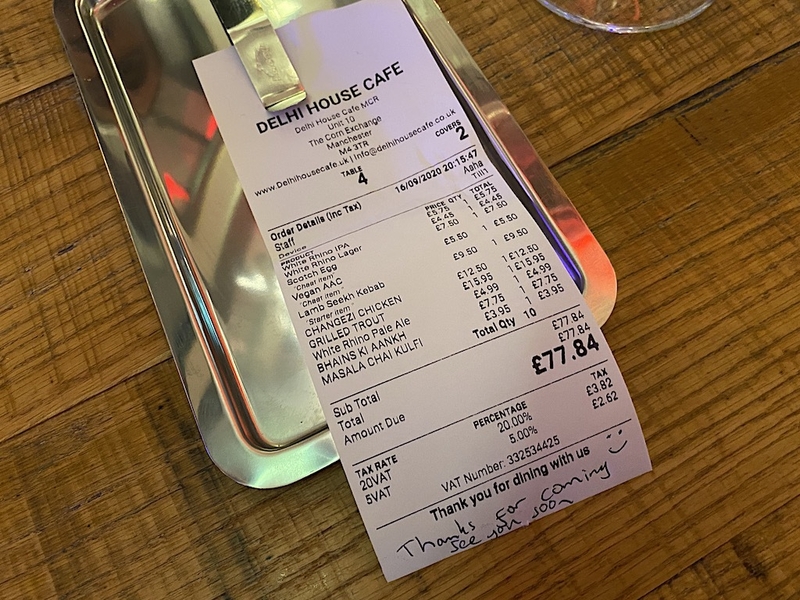 All scored reviews are unannounced, impartial, paid for by Confidential and completely independent of any commercial relationship. Venues are rated against the best examples of their type: 1-5: saw your leg off and eat it, 6-9: Netflix and chill, 10-11: if you're passing, 12-13: good, 14-15: very good, 16-17: excellent, 18-19: pure class, 20: cooked by God him/herself