DATA regarding the case rates, hospital occupancy and vaccinations has been released by GMCA today.

Sir Richard Leese addressed the press via video as he was in a full Manchester City Council meeting this afternoon. At the council meeting, Sir Richard moved a motion thanking our city for its response to the pandemic.

In seconding the motion Cllr Nigel Murphy described how community organisations have adapted during the pandemic to continue to support those who need them. He also paid tribute to the key workers who've kept the city going, saying: "Key workers should be recognised for keeping this country going. Instead, the Government is effectively giving them a pay cut. There is still time for the Government to put this right. In the meantime, Manchester will always value you and thank you." 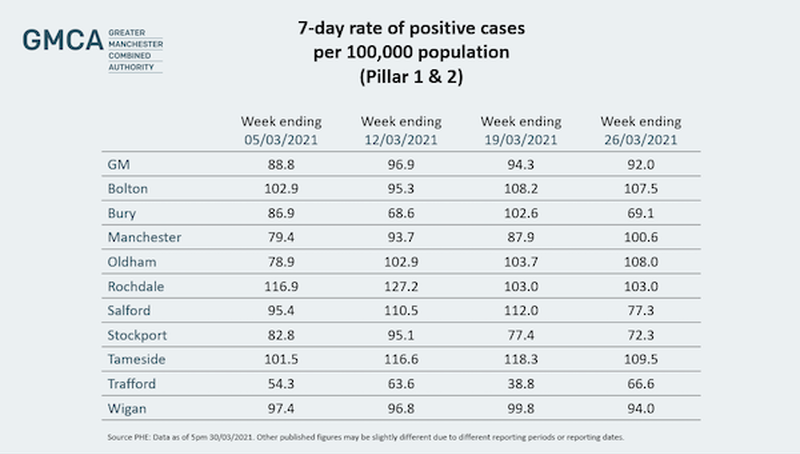 The overall case rate for Greater Manchester was 92 cases per 100,000 population up to the end of last week. Again, Trafford had the lowest rate at 66, with Bury close behind at 69. Bolton, Oldham and Tameside had the highest rates with 107.5, 108 and 109.5 respectively. Four districts have increased in rates including Trafford which despite being the lowest borough for case rates, had still almost doubled from last week.

Sir Richard said: "The question we've been asking ourselves is: Is this a worrying increase in transmission rates, or is it an increase in detection, particularly with regard to the return to school and education?"

A presentation from Public Health England has reassured GMCA that this is within the expected rate.

The total of first doses of vaccinations administered is 1,232,132 as of yesterday (30 March), which is roughly 50% of the eligible population of Greater Manchester.

Sir Richard said: "The very observant will notice that the percentage has gone down which is a fairly peculiar thing to do. The statistical basis for this is that denominator has increased in size, especially in the 18-49 age group, which has caused the percentage to go down."

There will be a pause in vaccinations over April to concentrate on giving second doses.

Sir Richard said that Manchester City Council are looking at ways to increase take-up rates and that this is a priority for the council. Below is a video featuring faith leaders from all over Manchester reassuring people that the vaccine is safe to use.

A women-only vaccination day is planned on Thursday 8 April at the KPS pharmacy-led vaccination centre in Whalley Range to encourage women to get vaccinated. It will be run by an all-female team and mothers can bring children.

There has been a slight increase in the weekly admissions for hospital patients with COVID-19, though in-patient diagnoses remains stable. Despite this, the number of high dependency beds has fallen, though this figure may increase as the new admissions filter through.

Sir Richard said: "Overall it's a positive story about what's going on in our hospitals. It is the case that the COVID crisis is over, at least for the time being. Clearly there has to be a lot of recovery, not least of a lot of very exhausted staff in the hospital sector and in the care sector, who are doing wonders around discharge."

Recovery plans for hospitals are now being formulated.

Read next: Burnham takes back control of Manchester buses