Who takes a pie to a cookery class for people living with cancer? Unfortunately I have to confess it was me. On my way to Ryan Riley’s Life Kitchen Class, I was desperately hungry and had to stop in at a well-known industrial baker (it was literally the only option) for a steak and ale pie to sustain me.

My worry was that the class, which aims to teach people living with cancer food tips and tricks that will make the treatment process that little bit easier, would be all about juicing and the benefits of going vegan (Google 'cancer and food' and you’ll see what I mean). I was also worried, as ever, that I might get hungry.

Luckily when I dived into the Life Kitchen, I was confronted with a heaped plate of the most delicious chocolate-chip cookies encrusted with salt crystals. I was relieved to realise that I had completely the wrong end of the stick. Pie was immediately stowed in handbag as a large mug of tea was placed in my hands.

Life Kitchen was set up by Ryan Riley, whose mum Krista sadly died of cancer. Ryan explained that her treatment left her unable to enjoy most foods – chemo can actively damage tastebuds as well as causing nausea – and that she ended up mostly eating sugary ice-pops.

While this is of course a laudable goal, it also helps that Ryan has bags of humour and charisma to pull it off. Before we’ve even chopped an onion, Ryan has us eating out of the palm of his hand (this is almost literally true) as we sample all the dishes cooked in the course of an afternoon, though we do use plates.

Eyebrow raised ironically he refers to his “close personal friend Nigella”, but it is true that celeb chefs are right behind him. The Life Kitchen project was launched at the River Cottage HQ and has been supported by Jamie Oliver, Jay Rayner, Hugh Fearnley Whittingstall and, yes, the deific Nigella.

The future is also looking bright for Life Kitchen: Sue Perkins is patron of the nascent charity and will be helping Ryan present a YouTube channel so he can reach more people. Ryan is also planning to collaborate with Professor Barry Smith on more research to support his work, which draws on scientific principles as well as the sheer pleasure of eating.

The first dish of the day, a carbonara with the traditional lardons and slightly-less-traditional peas and mint, is a neat illustration of this combination of the art of cooking and the science of flavour. The mint in the carbonara stimulates the trigeminal nerve, which carries sensation from the tongue and basically gives the other flavours in the dish a great big ‘whoosh’. It tastes wonderful and I make a note to try it with other early spring vegetables (asparagus would be fabulous).

This dish really exemplifies the Life Kitchen approach of teaching an everyday dish that most people like and lifting it with something fresh and invigorating.

"...it strikes me that people not touched by cancer might expect this to be a rather dour event, but I’ve not stopped laughing."

Further evidence of this celebratory approach is when Ryan pops open a bottle of fizz and offers everyone a drink, “well it is after half twelve” he deadpans. Bubbles also stimulate the trigeminal nerve so this may all be scientifically justified, though I rather think it really is just because it is after half twelve and everyone is having a great time.

The social aspect of the afternoon is really the most important element to Ryan, who told me: “if people take only one element away from today it’s that they had fun. That they were able to forget cancer for a bit and do something just for the pure enjoyment of it.”

Our next lesson is in using spices and herbs to lift a quick and healthy dinner. Ryan marinates salmon in rose harissa while he chops fennel into matchsticks and coats it with a yoghurt dressing. “Is it basically posh coleslaw?” someone quips.

Then we move onto a caramelised mushroom and lentil dish that illustrates the main flavour tool in the Life Kitchen box – umami. This ‘fifth flavour’ is the deep, rich, savoury element that is found in everything from cheese, ham and mushrooms to meat broth and seaweed. Enhancing this flavour, says Ryan, will enhance all the other flavour types too, a concept known as 'umami synergy' (it might sound like a men’s haircare product but I promise you it’s a real thing). Lifted with a gremolata of lemon zest, parsley and garlic, this is the dish that many of the other guests tell me has been their favourite.

“I think it’s really important to bring this out of the hospital setting” Ryan told me, gesturing to the beautiful surroundings of At The Kitchen in Cheadle Hulme, which is hosting this Life Kitchen event. As a food stylist as well as cook, Ryan appreciates that beautiful presentation is part of the pleasure of food (“though I care much more about flavour of course” he reminds me) and being in this lovely setting is all part of the therapeutic value.

The last dish we make is an apple crumble with a zingy lemon-lime crème fraiche on the side. The aim here is to create a sweet treat with plenty of flavour that uses minimum of sugar. Instead, Ryan uses a liberal dollop of vanilla paste and a heaped teaspoon of sweet garam masala to give a wonderful blend of comforting sweetness and gentle spice.

This is our chance to get our hands dirty – or buttery – as we rub the crumble together I chat to two other attendees. Lindsay is currently undergoing treatment for breast cancer and had brought her friend Sharon along.

Lindsay said “I’ve enjoyed really picking up on Ryan’s passion, I find it very touching that he is so interested in and cares about this thing that affects a lot of people.”

Sharon said “I’d not thought about the effect of food on treatment before, so I’ve really learnt a lot and now I can invite Lindsay round for lunch and tempt her appetite with something tasty.

"It can be hard to think of practical ways to help someone, so this is great," she continued. "It’s been a really lovely experience as friends, something we can do together and use in the future.”

As I chat to Lindsay and Sharon and they tell me funny stories, it strikes me that people not touched by cancer might expect this to be a rather dour event, but I’ve not stopped laughing... except to put delicious food in my mouth. No pies required.

Life Kitchen Manchester was held in At The Kitchen, Cheadle Hulme. The next class will be co-hosted by Sue Perkins in Newcastle on Tuesday 15th May for more details and to apply email: Newcastle@lifekitchen.co.uk .To read more about Life Kitchen you can visit the website or to donate, visit the Go Fund Me Page.

Could this be Manchester’s best weekend bar crawl?
● / Television

BC Camplight: 'Every time we played Manchester, it was just bedlam'
● / Entertainment 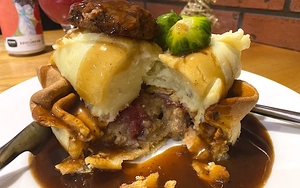 Christmas kulfi, burrata in bacon, and a whole slab of festive lasagne 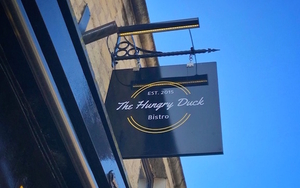 Popular restaurant is up for sale before Christmas 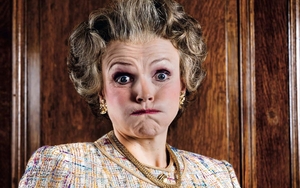 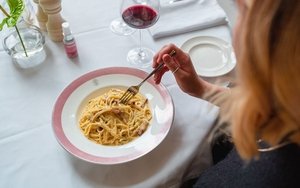 Which restaurants have our readers been visiting in November?