I expected the bikes, the prams and the dogs and the cosy South-Manchesterness of it all but one man was a delightful enigma. He sat at a high table with a coffee and read his phone while nibbling on a pastry. So what?

Well, the man never took his cycling helmet off the whole time. My son and I wondered whether he worried about male-pattern baldness or was he scared of heights, fearing he might topple off his high chair and strike his head against the fine wooden floor?

This added good heft and was proper sausage too with texture, not a weak and flimsy thing

Watching the man resisting the urge to de-helmet was fun but looking at the building was better. Wood. Iron. Brick. You have to love the architecture of Station South, the new cycle café and bar in Levenshulme. The main ceiling is a marvel of timber supported on a brutal iron beam that makes it better. A yin and yang of construction. The bar arrangement, the indoor viewing terrace to the east and the airy nature of the place all work well.

Even if you didn’t know the name of the place the exterior of the building on the A6 would give it away as a former railway station. This sits over the very popular 5.4-mile Fallowfield Loop, the former rail line and now the off-road cycling and walking route from Chorlton to Fairfield, near Droylsden. The station opened in 1892 as one of the stations feeding into Central Station, now Manchester Central exhibition centre.

The whole refurb has been beautifully realised through the work of a Community Interest Company led by Abigail Pound, Mark Jermyn and Pauline Johnston and funded by agencies such as Railway Paths, Railway Heritage Trust and Architectural Trust and with a crowd-funding element. The names of donors are carved in wood on floor tiles. There’s more to come too, including a huge terrace with a cycle school and an even bigger Loop-side garden. Work is taking place on those features right now.

Looking at the food was good too, all vigorous colours with good scale. It’s not unexpected food, very typical for this type of venue and for this type of demographic, but it defines "wholesome", as does Station South generally.

I had the smoked mackerel kedgeree (£9), a hockey puck of big flavours made from triple wild rice, spiced for a nice kick and also rich with herbs. It’s a beauty of a dish especially when the crowning soft-boiled egg breaks. Then it’s time to ball the chunks of mackerel with the rice and dive in. I could make this a staple lunch., but it's crucial the egg is soft-boiled, a hard-boiled egg wouldn’t pass muster.

My son had the huevos rancheros (£9) and this was as robust and sturdy as the kedgeree. It was as pretty and colourful too. Ralph went for the extra, a sausage at £2. This added good heft and was proper sausage too with texture, not a weak and flimsy thing. The buttermilk cornbread was particularly good and the crushed avocado, the pico de gallo (chopped tomato and onion salsa with extras) and the cashew sour cream all danced along merrily with a fine fried egg saying hello at the top of the heap.

I’d been a week or two before and for dessert then enjoyed a completely over-the-top Coco Pops French Toast (£7.50) with a marmalade middle, lots of mascarpone, fruit, chocolate fudge sauce and a potential heart attack thrown in. Crowd-pleaser this one.

Station South is at present only open for food in the morning (there’s a range of breakfast options) and at lunchtime but a Sunday roast is arriving imminently and later in the year there’ll be evening service. The place does stay open into the night for drinks and for any remaining pastries left on the counter. I had a cinnamon croissant on the second occasion and it was fine.

To take part fully in the whole experience I cycled here on both visits from the city centre. My son and I cycled the four miles and a half miles back on the second choosing a route with cycle lanes for four of those miles. We only got glared at once for not wearing helmets. Easy riders.

I’ll be cycling back again because I really like Station South. I think it’s a magnificent project and wish the place all the best. Yet something nagged at me.

Monocultures are emphasised most obviously in hospitality venues. Station South doesn’t want to be anything like a monoculture, it wants to be as diverse as possible. It’s a lovely place underscored no doubt with a philosophy of "inclusion" and "diversity", but as my mother used to repeat, “Birds of a feather flock together”.

The food and drink offer, the ambience and the client base could have been in any aspirant place from Chorlton to Islington from Reykjavik to Washington DC from Melbourne to Hamburg. In Station South, I had the feeling I could guess exactly how everyone voted. It felt like everybody was agreeing with one another.

I feel after visiting such a sweet place as Station South my next visit should be to a ‘Spoons to down a couple of just-on-sell-by-date bitters, or a trip into the Millstone on Thomas Street to karaoke-kill Total Eclipse of the Heart. In other words, chow down on a fiercer atmosphere, take in more of the country, check out the pleasures of other tribes.

Writer and journalist Jim McClellan once wrote that, in Manchester, “the social processes are more visible”. Station South’s location in Levenshulme, at this stage in the suburb's story, seems the epitome of this. As I was writing the review Darren McGarvey was on Radio 4’s Start the Week programme talking about his book The Social Distance Between Us. He wants “proximity”, as he calls it, to develop between the classes, especially between the traditional working class and the middle class.

Maybe one day. Can Station South bridge the gap between people living in such close "proximity" in Levenshulme? Here's hoping. 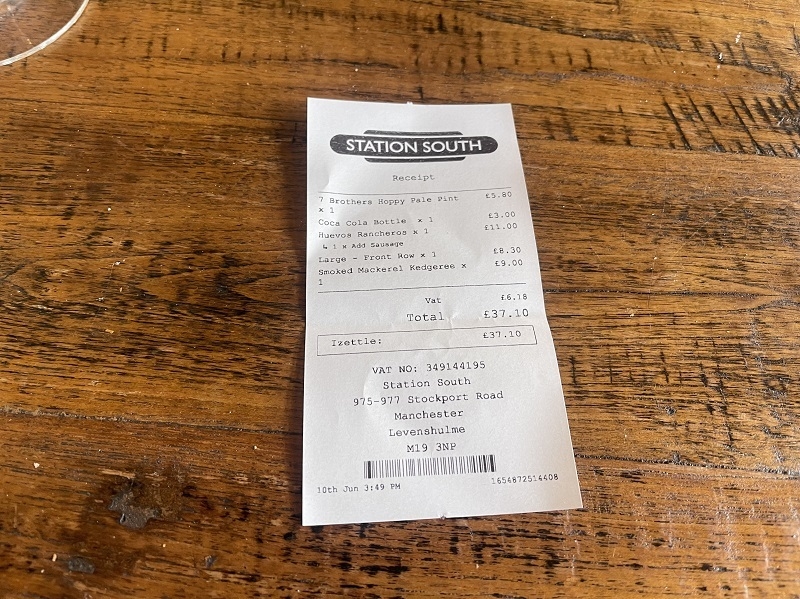