Hotels, even in the five-star category, whilst competing very closely with each other in luxury, fall into two categories: those that are controlled by accountants and see the food and beverage side of their operation as a necessary evil and those that are run by hoteliers who consider the quality of the BLT delivered to the room as important as the thickness of the bath robes.

Was that salmon buggered up, as my Grannie used to say when my mum wasn’t in earshot?

I’d read somewhere that Innside Manchester, by Melia, which had lost its way a little over the past three years, had used the COVID time out to do something about its slipped halo.

I’ve stayed in a few Melias across the world. Even with their huge numbers, these guys have managed to maintain the quality of the restaurants alongside the rooms. A meal at the Melia Nomad in NYC, three years ago, an Italian, beat the Italian from the previous night; one considered to be The Daddy, where a million gangster movies had been made.

So, what about the brand spanking new restaurant at Innside?

The attached bar has an an outside terrace that has been expanded, refurbished and made into a must-try affair. It ranks easily with The Lowry and Dakota.

The menus, printed in three parts on throw-away paper (rightly in COVID times) don’t at first look that interesting. They’re a little ‘bitty’ and too international. Possibly.

Taking a deeper look, it’s not that straightforward. There are three different menus for different times and different areas. Levant Bilgic is front of house, an old pal with a decade or so under his belt. He allowed us to choose across the menus. We agreed on a couple of glasses of New Zealand Marlborough (£8.90, large, obvs) which were what you’d expect, crisp green apple moving to grapefruit. Married with the small plates well.

Fish finger ‘dawg’ and mango pico de gallo (£9) shouldn’t be described as small. It was the size of a freshly born porpoise. Neither should the term ‘for sharing’ be used. Because, having eaten one, there is no way I will - ever.

This ‘dawg’ is a fat hot dog of a cod fillet, deep fried in crispy chip shop batter, stuffed into a very fresh hot dog bun and topped off with the Mexican household staple, pico de gallo; a spicy, sharp, sweet salsa that works brilliantly with mango instead of tomato at this time of year. It was well cooked, well thought out and well delivered.

Both the 55-year-old boy scout and I fell in love with it.

Deep-fried sea cockle popcorn (£7) were pudgy little fellers in a very light, crisp batter of Japanese precision served with Sarson’s vinegar. I splashed a load into the egg cup that was being used to hold the cocktail sticks, then ate them one by one, dipping them gingerly into the vinegar. I can still taste the seaside.

A salad of crab didn’t work - only because it was sat on a pair of warm pikelets. It messed with my head and with the fresh crab meat, which should be in either a hot dish or cold dish - not lukewarm.

Schofield let me have some of his ‘boiled ham and eggs;’ a salad of dandelion leaves, watercress and homemade salad cream, (£7), something straight out of an Escoffier recipe from the 19th century. More of these sturdy salads from that period is my tip.

Grilled salmon with soya and brown sugar, pink grapefruit hollandaise (£22) looked like it had been incinerated. The broccoli and hollandaise looked the part though. Was that salmon buggered up, as my Grannie used to say when my mum wasn’t in earshot? Nope. It was the colour of the sugar and soy sauce simply caramelised; the flesh still pink underneath just turning away from translucent.

What was buggered up was the hollandaise; the pink grapefruit didn’t do it any favours, orange would have been better.

My rump of lamb with pickled beetroot, runner beans, shallots and rosemary was another great dish. Sorry to go on about it and the chef is probably going to think I’m a knob but these flavours are perfect, end of empire and pre-war rationing. Gorgeous. Bursting with personality.

The Hideout’s zucchini fries (£4) are the best in the city. Their new potatoes beat the previous best, eaten in my early twenties at The Wild Boar at Beeston, out near Tarporley. I have been dreaming of their new Cheshire potatoes in lashings of local butter. The last time I went, in my early twenties, I was on a first date, driving a Lotus S130/5. The wheel fell off on the way home. Never saw her again. The Hideout’s chef, with the addition of lemon, tarragon and shallots, has brought those memories back. A simple but perfect dish.

Puddings are good, not extraordinary. Affogato, vanilla ice cream, Spanish sherry and hot espresso (£8) and English strawberries, biscotti, basil sugar and pistachio milk shake. Nice ideas on both, but a little overshadowed by the superstars above.

So, The Hideout at Innside by Melia. Bloody good. It’s going on my civilian list. 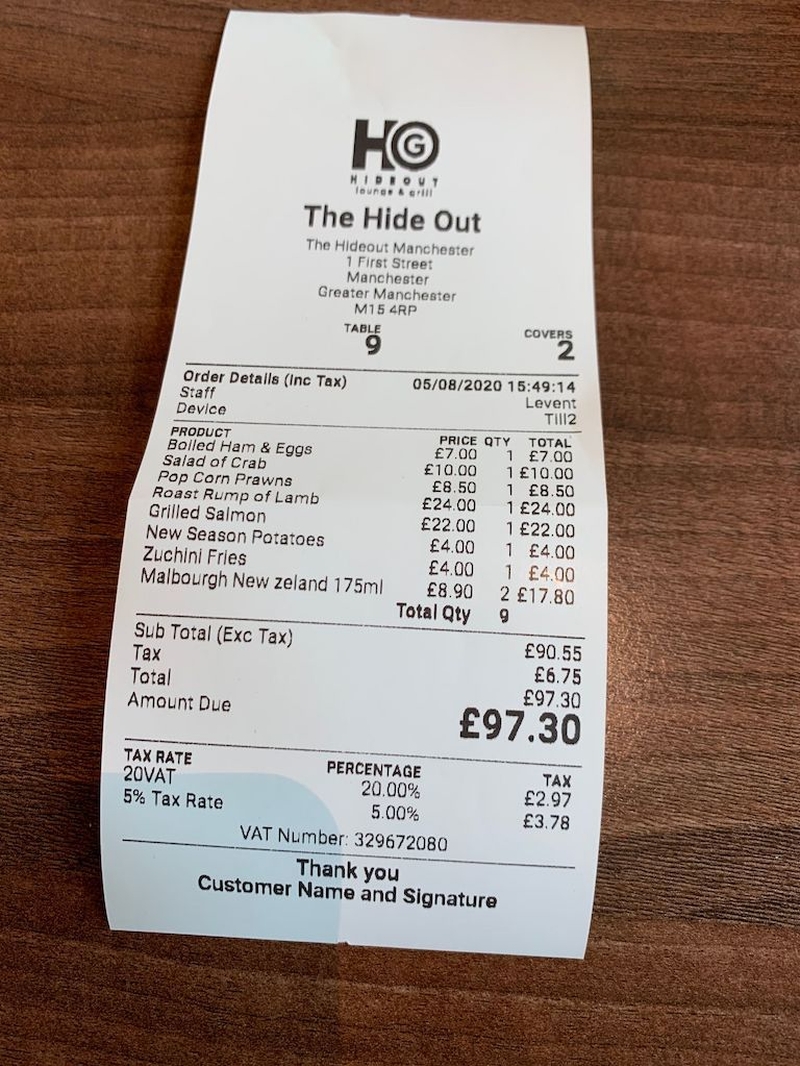