Although pictures from the Bank Holiday don’t give much of a clue, it is still a Government recommendation to wear a mask in a crowded place or on public transport. However, as one Mr Michael Gove can attest, it is not mandatory.

The requirement to wear a face covering in enclosed public spaces (with exemptions) was dropped in July though, as we reported, metro mayors across the UK exercised local powers to make mask wearing compulsory on some forms of public transport.

One example was Andy Burnham’s decision to contact Transport for Greater Manchester (TfGM) to request they amend the Conditions of Carriage on Metrolink. Failure to wear a mask (unless exempt) can now theoretically see passengers refused travel and escorted off Metrolink services - or facing a fine of up to £100. Passengers using bus stations and interchanges are also required to wear face coverings unless exempt.

Having anecdotally observed that mask wearing on the tram wasn’t exactly a popular sport these days, we asked our readers on Facebook if they were still wearing masks and if anyone had been fined for not wearing one. Six weeks after the original announcement, it seemed like a good idea to see if the rule was having any discernable effect.

Sample comments included: “I haven't worn a mask on the tram since early June. Never been asked to wear one or been threatened with a fine,” and “They can’t enforce paying for the met properly how does he think they will enforce a mask?”

I’m sorry but this U-turn is nowhere near enough.

As we go into tomorrow, much more grip, clarity and leadership is needed if we are to manage the risks.

Ministers should start NOW and make a clear statement that masks will continue to be mandatory on all public transport.
— Andy Burnham (@AndyBurnhamGM) July 18, 2021

Enforcement was a common theme, with many readers expressing concern that trying to get people to comply would end up in confrontation and put Metrolink staff in harm’s way. So naturally we were curious if Transport for Greater Manchester had had much difficulty with enforcing the mask requirement and if there was any data on how many people were not complying.

A Freedom of Information request (lodged by Place North West) with TfGM revealed that, since 19 July, not a single fine for breaching the condition of carriage has been handed out to passengers travelling on the Metrolink.

There are two possible interpretations of this piece of information. The first is that tram passengers are uniformly wearing their masks in all circumstances and therefore there is no need to fine anyone. The second is that compliance is less than 100% but the condition of carriage which makes wearing a face-covering mandatory is not being enforced.

📢 JOINT STATEMENT 📢@MetroMayorSteve and metro mayors representing over 10 million people call on the government to reverse their decision to remove the requirements to wear face masks on public transport.

Andy Burnham told BBC Radio Manchester: “We have a condition of carriage on Metrolink that people have to wear masks. I'm very proud that the Greater Manchester public is clearly responding to that.” He mentioned that mask wearing on the tram service is more common than on the train or the bus, neither of which have a legal requirement to wear a mask. However, the Mayor acknowledged the difficulty of enforcing mask wearing, adding, “we do not have the resources to ask every single person on Metrolink if he's not wearing a mask to go and wear a mask.”

Though the Mayor claimed that compliance with the condition was high, he also admitted that: “The truth of the matter is that as we've got more into the summer the levels of mask wearing have drifted down.”

“I think as we get into the winter… the other transport modes are going to have to reconsider their position in my view, and I think masks are going to be likely again later this year.”

While it is not exactly clear from the context if Mr Burnham means that is it likely that masks will be required in all enclosed public settings or just on all forms of public transport, the Government does have the ability to reintroduce the requirement to wear masks. It is thought to be one of the first options considered if Covid cases start to climb again in the late autumn or winter.

Indeed, the Government advice states: “The virus will still continue to circulate at home and abroad, and this winter COVID-19, combined with a resurgence of influenza and other respiratory diseases, may cause additional strain on top of normal winter pressures on the NHS. The Government may need to take measures to help manage the virus during periods of higher risk, such as winter.”

However, when designing public policy, it is hard to put the genie back in the bottle, or perhaps more pertinently, the mask back on the commuter.

The mayor's original position was that requiring a mask on the tram would not be successful because it was too at odds with the Government's general repeal of the requirement, saying, "the reality is, it will be very difficult to do that when there is a different message at a national level, we feel that we have a recipe for confusion."

Mr Burnham did eventually decide to go ahead with making mask wearing on trams a condition of carriage after discussions with the other metro mayors. 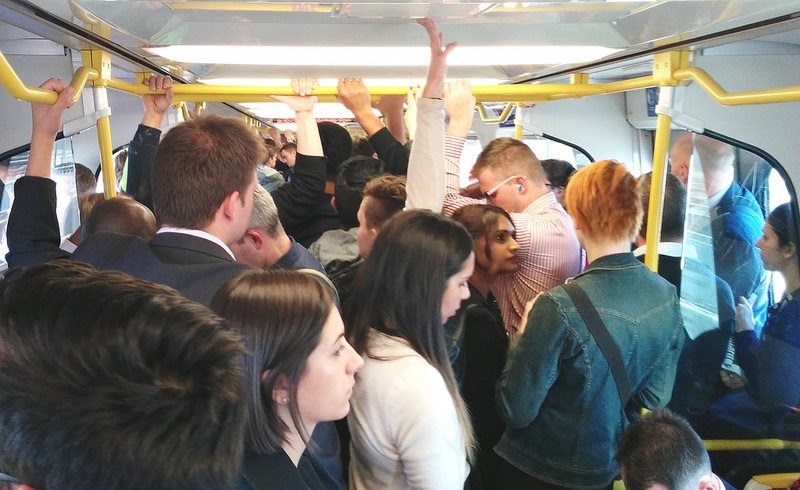 We also contacted TfGM for comment on mask wearing on the tram. A spokesperson responded: "To help each other stay safe you must wear a face covering on Metrolink services and stops. Many people rely on public transport and we would therefore ask passengers to think of the concerns some people may have about Coronavirus when travelling and be kind to one another by wearing a face covering as directed.

“Metrolink staff are working closely with GMP’s Transport Unit to encourage and inform passengers. The TravelSafe Partnership, which is jointly lead by TfGM and GMP Transport Unit, alongside transport operators, has completed 67 partnership days across 51 locations and handed out over 11,000 masks to customers as a part of this engagement.

“Passengers have been receptive and many people continue to wear face coverings on services. carriage. This is in large part due to the ongoing efforts of Metrolink and TfGM staff and the Travelsafe partnership.”

In pictures: Manchester pride protest 2021
What you say
Got an account? Login, to comment/rant.
0 Opinions
Previous Article Next Article
Read Next
● / Features/Opinion