Everyone loves Tom Kerridge. When I invited my mum to visit his new restaurant with me, she was delighted. She’d seen him on Saturday Kitchen and liked his down-to-earth approach.

"He’s the one who lost all that weight, isn’t he?"

If I were to order this again (and I will), there’s no way on earth I’d share it

But he’s not just that man-of-the-people chef off the telly. He has several very successful restaurants and pubs to his name including the only UK two-Michelin-star pub: The Hand and Flowers in Marlow - which has a 'beef and dripping' starter on the menu that costs £17.50. A man of contrasts then, and The Bull & Bear is full of them.

The restaurant is inside the newly-opened, high-end Stock Exchange Hotel owned by footballers Gary Neville and Ryan Giggs, with hotelier Winston Zahra. You have to get past a doorman and two reception desks before entering the dining room. (Tom's wife) Beth Cullen-Kerridge’s ‘empty suit’ sculpture rises up in the centre, throwing artistic shade on the faceless bankers that once refused to fund young Kerridge’s first restaurant. But it does this under the ornate dome of a building that was once - and arguably still is - a church to capitalism.

There’s no denying that the space is magnificent, but first I have to address the elephant-sized TVs in the room. A ring of flashing LCD screens on mute encircle diners, tuned into sports channels - showing mostly gyrating NFL cheerleaders during our visit. They're an unwelcome distraction in a world of peak screen time. An incongruous splicing of sports bar and fine dining. The bloke on the next table reckoned they made it tricky to have a conversation with his wife without his eyes drifting off to the left. Not ideal on date night.

Apart from a very long delay when paying our bill because till and menu disagreed on the price of our wine (a Unico Zelo Esoterico orange £39 - refreshing with peach, tangerine and a spot of ginger) the service was seamless. Kerridge is sending a different manager from each of his other venues up to Manchester every week, to oversee things. Even the bartender who mixed our pre-dinner cocktails (Bergamot Spritz and Fair Verona both £12) had tried everything on the menu. They know their stuff.

The menu is divided into ‘cold’, ’hot’, ‘hot - a bit bigger’, ‘cheese’, ‘sides’ and ‘sweet’. We were advised to share five or six dishes as well as sides and desserts. It seemed a lot, but we deemed it appropriate, given the surroundings, to follow the mantra of Gordon Gecko in the 1987 film Wall Street: ‘Greed is good’.

It was an excellent decision to skip the usual sourdough and level-up to warm cheese scones with ham hock butter (£7). The butter was so dense with shredded ham that it resembled a very, very posh sandwich spread. Potted salmon (£9.50) was its opposite number. Light, creamy and perfectly cooked. It was topped with a bright apple jelly and pinches of caviar that looked like tiny blackberries and served with a simple 'cucumber chutney'. We piled it on the accompanying rye crisps and wished for a bigger portion.

Our server nearly melted into a puddle when enthusiastically describing the crispy pig’s head (£9.50). Cooked long and slow, the meat falls off the bone (well, skull) before being bound into patties, panko-crumbed and deep fried. It was as melting as that waitress. I say ‘It’, for there was only one, about the diameter of a poker chip. I sliced it into equal half moons which we speared onto our forks with half a devil-on-horseback, a smear of date purée and a clump of celeriac remoulade. One divine moment, and then it was gone. If I were to order this again (and I will), there’s no way on earth I’d share it. At almost a tenner per hot disc of love, though, it’s a luxury that the nose-to-tail concept is kind of at odds with.

Pollock Scotch egg with a faultless shellfish bisque (£9.50) was more or less the conventional size but we were surprised to find a quail’s egg inside. One could argue the higher ratio of fish to egg equates to more bang for your buck but it seemed a bit stingy on a menu apparently designed for sharing. The bloke on the next table muttered something about needing a magnifying glass - although to be fair, they were defiantly sticking to the ‘two starters two mains’ approach. Recipes by old Tom, portion sizes by new Tom?

The two ‘a bit bigger’ plates were… a bit bigger. Mum loved the spiced Cornish cod with caramelised cauliflower and golden raisins (£14.50). The cauliflower was crisp, the spicing subtle and the addition of peanuts a nice surprise.

Chicken Kiev with maple glazed butternut squash (£14.50) was a far cry from those Birdseye horrors of my youth that always used to burst in the oven and result in a hollow, green-tinged husk of rusk. There was immense satisfaction as the molten butter gushed out, but the chicken could have been a touch more tender for my money. A duo of roasted and pureed squash was the ideal sweet foil to that intense garlic butter.

The only dish that really let us down was a reworked pomme boulangère (£5.50). It arrived crowned with a ring of paper thin, crisp potato slices that showed the impeccable knife skills that really make this simple dish. But once that top layer was lifted off, there was only a pot full of caramelised onions with a few chunks of slightly undercooked spud nestled within. We struggled to find the desire to finish it. Nobody wants a low carb pomme boulangère.

We had plenty of room for dessert. At £8.50 apiece, nutmeg fool with plum pudding ice cream had all the flavours of Christmas - including brandy plumped sultanas - without any of the stodge. A velvety banana custard was a revelation, closer to breakfast than dessert but managing to be both comforting and luxurious. A sprinkling of salted pistachios balanced the sweetness of the dates and honeycomb.

Representing the upward thrust and downward swipe of the stock market, The Bull & Bear is an appropriate name for a restaurant of contrasts. Kerridge’s dishes may be inspired by pub classics but this is fine dining portions at fine dining prices. For most, that means reserving this place for special occasions when you really don’t want to be distracted by enormous flashing TV screens. What a shame in a dining room so beautiful and with food that deserves Manchester's full attention. 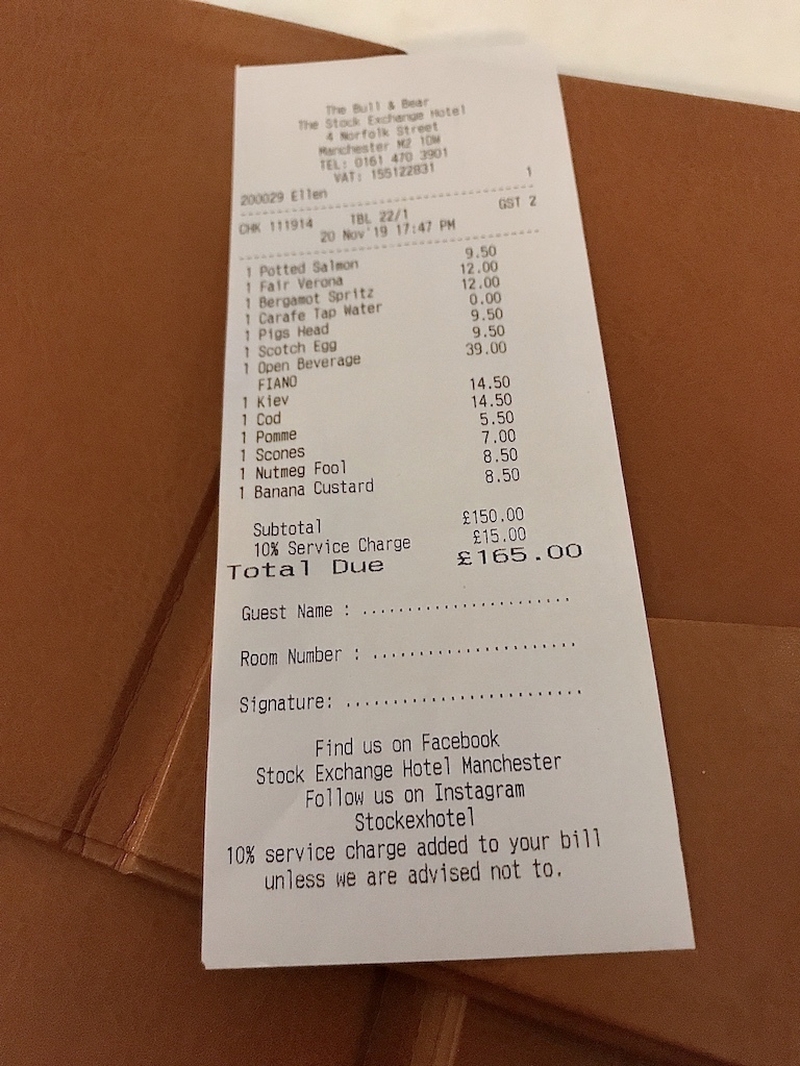