Neil Sowerby on life beyond claret in a city utterly transformed

OUTSIDE, Bordeaux is baking. Tomorrow we’ll fly home before the temperature soars beyond 40 degrees. Inside L’Intendant the air conditioning is a comfort, but its true purpose is to protect 15,000 bottles of the fine wines associated with the city. They are spectacularly displayed around the walls of a 12 metre high, spiralling stairway. All for sale – because this is a shop.

This is all breaking the mould in a France that for too long dismissed wines that weren’t French.

Half way up I get into conversation with a German connoisseur. “From Manchester, you say – ah, Hawksmoor, the great claret blunder, the world still talks about it.”

He’s referring, of course, to that fateful day this May when diners at the Deansgate steakhouse were mistakenly served a £4,500 bottle of Chateau Le Pin Pomerol 2001 instead of the £260 Chateau Pichon-Lalande 2001 they had ordered.

The incident went viral, provoking mutterings of “how can any wine be worth that much?” Well, market forces, supply and demand. Minuscule Le Pin produces just 200 cases a year and is a trophy red. There are a few of those dotted around L’Intendant, where vintages date back to 1945 (a legendary year), alongside relatively affordable wines.

From the vantage point of an English wine lover, with all the world to choose from, the old mystique of Bordeaux has worn off somewhat. Partly due to its reds in particular becoming a global commodity. The word claret is as démodé as cordon bleu cuisine.

Which brings us to La Cité du Vin, the focus of our return to a reinvigorated, scrubbed up city. Our last visit was decades ago when its 18th century architectural glories were as grime-ridden as the ancient bottles slumbering in its fusty trade cellars. Today, after three decades of enlightened civic planning, its limestone treasures dazzle in the fierce sunlight.

The swift flowing, tidal Garonne river may be as muddy as back then, but the esplanade along its banks has been transformed and 2km north, reached by the sleekest of tram services, the old docks now play home to the the €81 million ‘Guggenheim of Wine”.

That label’s too glib, but it has stuck. Comparisons with Frank Gehry’s game-changing museum on the banks of the Nervión river in Bilbao are inevitable. But La Cité, just three years old, feels more a valuable addition than a turning point. 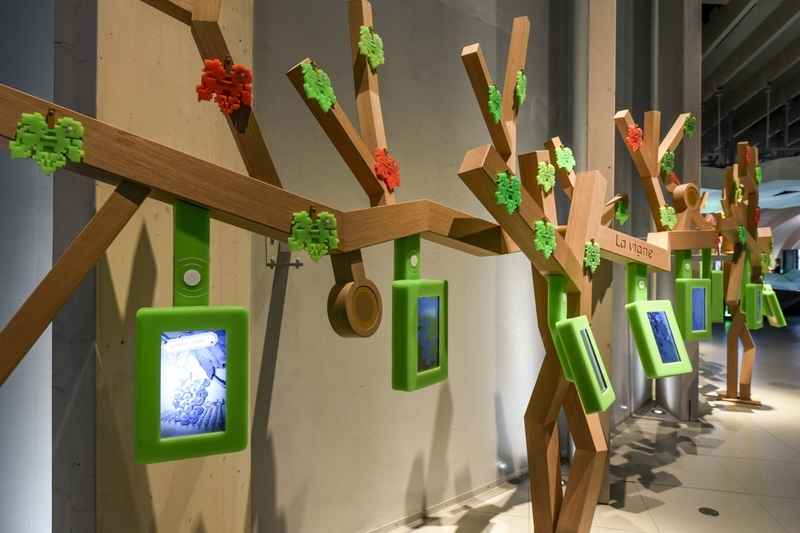 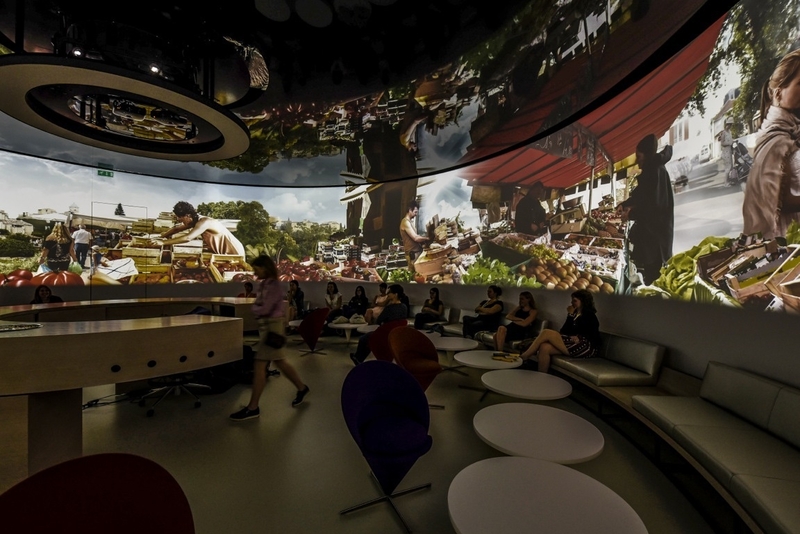 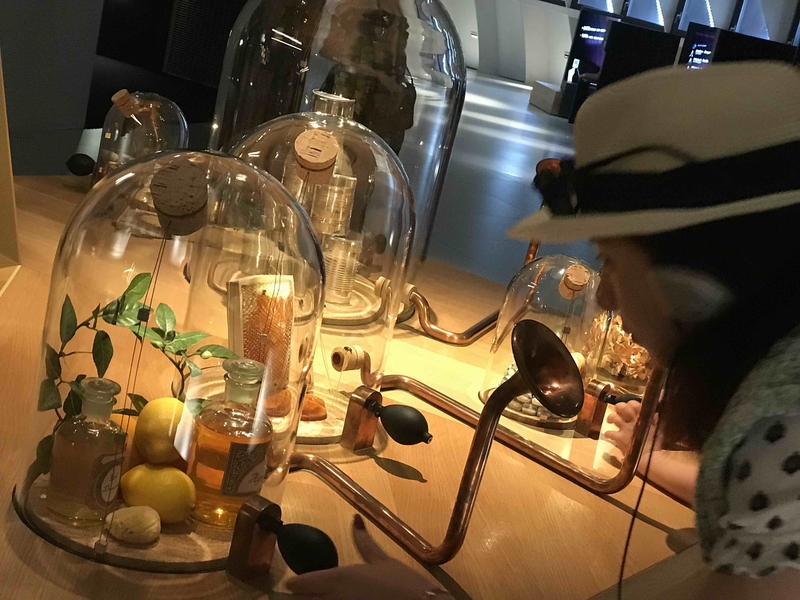 Devoted to educating the public in the glories of wine and viticulture, it certainly catches the eye on the outside – an asymmetrical swish of gold and aluminium, catching the sun and topped by a leaning tower. Inside, it casts aside the old museum certainties of curated objects in favour of an immersive, interactive experience, involving all the senses. So expect to do a lot of sniffing out of little funnels to unleash various aromas. What am I getting here? Gooseberry, honey, farmyard? Book a tasting workshop to get the whole synaesthetic connection.

We chose to ramble around and felt slightly adrift against filmic backdrops. Of course, there’s a slight theme park appeal; that’s part of its populist, demystifying mission. A chance to be unafraid of terroir and minerality. One for the novices. More important than that. The latest special exhibition, running until November 17 2019, is devoted to Argentina, its six distinct wine regions, iconic grapes Torrontes and Malbec, gastronomy and culture, including its literature and music.

This is all breaking the mould in a France that for too long dismissed wines that weren’t French; indeed in Bordeaux, Burgundy wouldn’t get much of a shout. Further evidence of this sea change was to be found in the Cité’s top floor Belvedere tasting room – attractive for its 360 degree panorama and also for the complimentary glass of wine for each ticket holder. The array of bottles on the counter covered the globe.

We sipped an Australian Shiraz as we gazed back through the heat haze to the city proper far beyond the futuristic Chaban-Delmas Bridge. Below us the Bassins à Flot – derelict tidal basins” – are undergoing rapid gentrification.

The advance guard has been the resurgent Les Halles de Bacalan market across the road from the Cité’. It’s a smart food hall, hosting 24 traders. Fronting it is a separate brasserie. La Familia, named after a treasured 1920s neighbourhood cinema and celebrating the food and drink of South West France.

In truth the food was rather better at Les Tables de Vatel bistro attached to our base, the Hotel Vatel, conveniently situated half way back to the centre. The mission of both is to train hospitality staff, but there was nothing apprentice about our lunch there with experienced chef Adrien Ferran surprising us with a delicious main of shark risotto.

Vatel is on the Quai des Chartrons, whose warehouses were central to the wine and slave trade which created the city’s wealth. Evidence of which is more than 5,000 restored houses from the 18th century and 350 listed historic monuments. Such glories make it a delight to wander around the UNESCO World Heritage Status Chartrons district and the charming Jardin Public. Most folk amble along the Rue de Notre Dame in search of antiques; we perversely discovered Rn7 Caviste at No.102, devoted exclusively to the wines of the Northern Rhone where (brave incomer Frederic Bennetot introduced us to the most impressive wines we tasted on our city break.

The city, as you’d expect, boasts some terrific wine bars. Close to L’Intendant is Le Bar a Vin, a Bordeaux institution in lofty ornate premises. Government-subsidised, it offers bargain by the glass offers of some seriously good wines.

Around the Place St Pierre is a fertile area for an evening’s carousing. Check out near neighbours on the Rue des Bahutiers, Italian-owned Le Wine Bar with more than 300 wines from around the world and excellent snacks to accompany them, and the hipper Vins Urbains. By the glass is expensive, so definitely go for a bottle to share (400 to choose from) and don’t miss the delights of their with even more bottles and a white truffle croque monsieur.

Some palate-cleansing hoppiness? Venture further down winding Bahutiers to its junction with with the Rue Alsace at Lorraine and you’ll encounter the Bordeaux branch of the French craft beer chain, Les BerThoM. It has a fine Belgian selection, but do try the fine local Merignac beer.

At the other end of the food and drink scale Bordeaux has it share of Michelin restaurants, non more high profile the Gordon Ramsay’s two-starred Le Pressoir d’Argent inside the InterContinental Bordeaux – Le Grand Hotel. Its name comes from the dining room’s centrepiece, a solid silver lobster press. Splash out well over €100 and they’ll serve you a native lobster fresh from the press, steamed with lemon leaf, corn, girolles, courgettes, coral and lemongrass bisque. Maybe the shadow of Brexit is straitening you purse strings? Stick to the €185 Tasting Menu. We thought better of it.

It is, of course, easy to dine well on local produce in the classic bistros or the trendier neo-bistros that scorn the Michelin flashiness, while traditional markets and new fangled food courts are fun to explore. 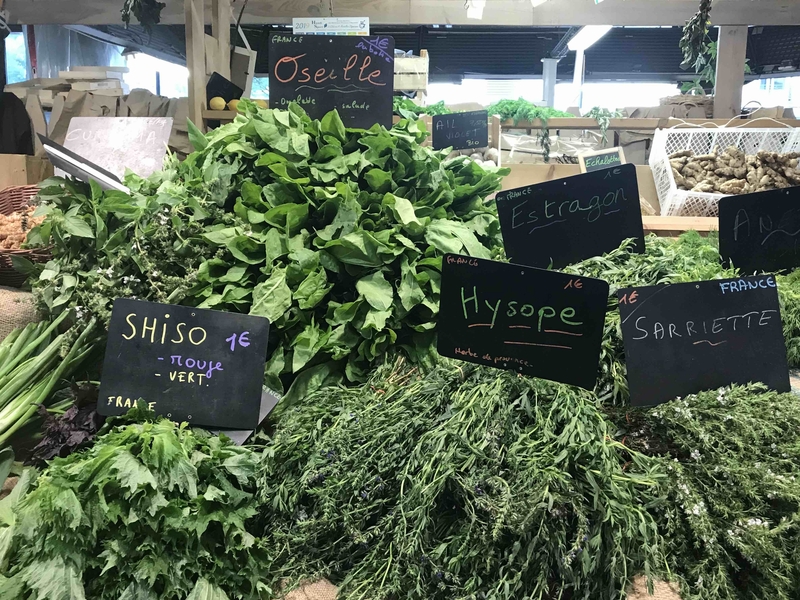 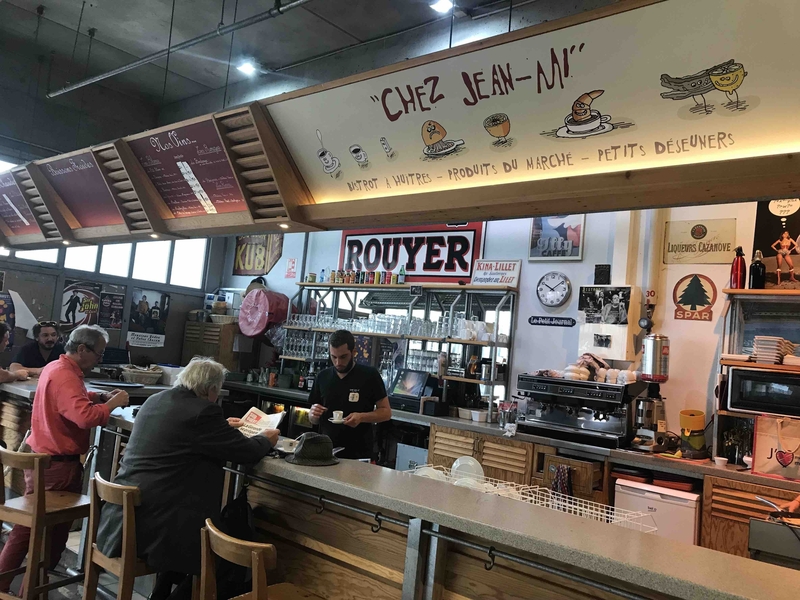 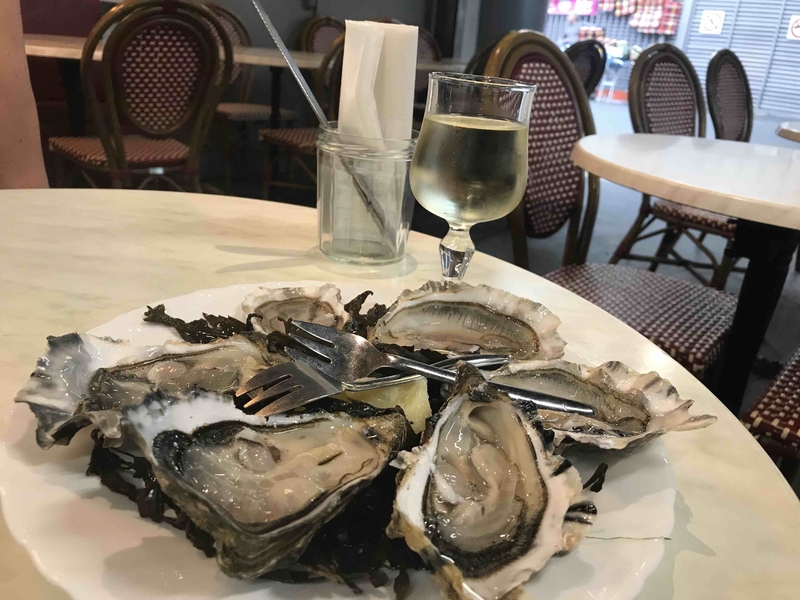 It’s quite a contrast to traditional produce market Les Halles de Capucins in the homely St Michael’s quarter, south of St Pierre. It was in second gear the Tuesday we visited but could still maintain luxuriant fresh herb stall, the like of which I’ve never seen before (actually I recognised it from one of those Rick Stein’s Long Weekends programmes). Mid-morning was a perfect time to indulge in a half dozen Arcachon oysters and a tumbler of Entre deux Mers white at Chez Jean-Mi, bistrot a huitres. A piece of old Bordeaux. Vive les traditions Bordelaises.

IT'S NOT ALL ABOUT WINE – THREE MUST-VISITS IN BORDEAUX

La Bourse and the Miroir d’Eau

Grandest vestige of Bordeaux’s bustling mercantile zenith is the Place de la Bourse (‘Stock Exchange Square). Set back from the river’s curve, romantically dubbed the Port of the Moon, it resembles a mini-Versailles. This effect is compounded by its reflection in the Miroir d’Eau (‘water mirror’), a 2006 addition to the waterfront. Basically it’s a 130 metre wide granite basin bearing a regularly refreshed inch of water, which every 20 minutes or sprays up a dense fog-like vapour, adding to the atmospherics and spooking the paddling toddlers.

There’s nothing like a church tower panorama to help you get a feel for a city. We tried two. The gargoyle-thronged Gothic belfry, the Tour Pey Berland, was built in the 15th century alongside the Cathedral (a spire came later). 231 steps will take you to the viewpoint; be prepared to queue, visitor numbers are restricted. Its contemporary rival, the 114 metre high bell tower of the Basilica of Saint-Michel is also freestanding and spired. Known as La Fleche (‘the arrow), it’s quite a climb but you are rewarded with a view down onto a vibrant local street market. The tower’s crypt used to house a collection of mummies unearthed from a local burial ground in the 18th century. Our macabre  expectations were dashed – they were reburied 40 years ago. 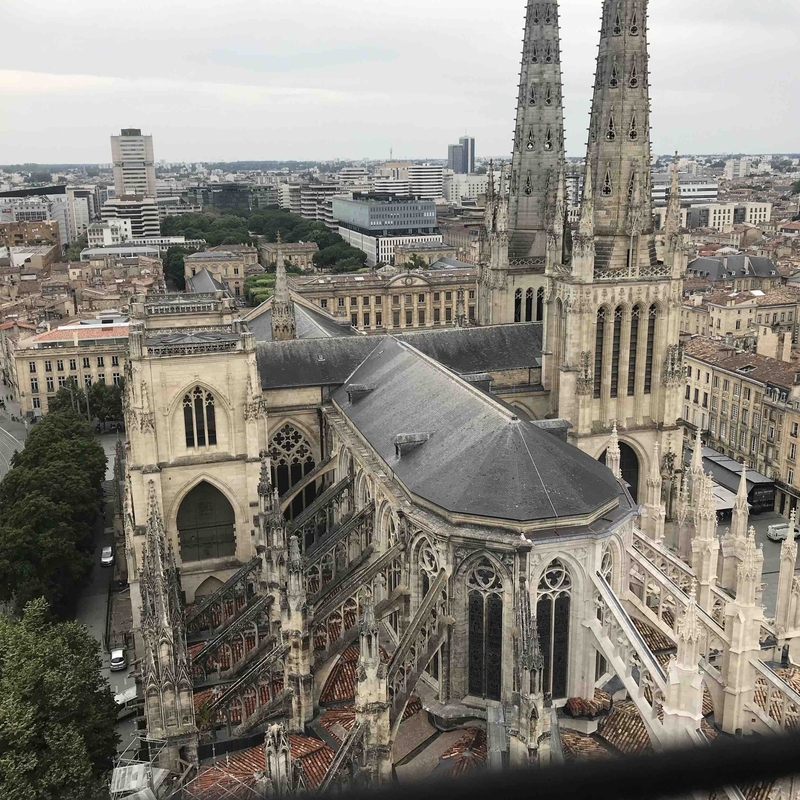 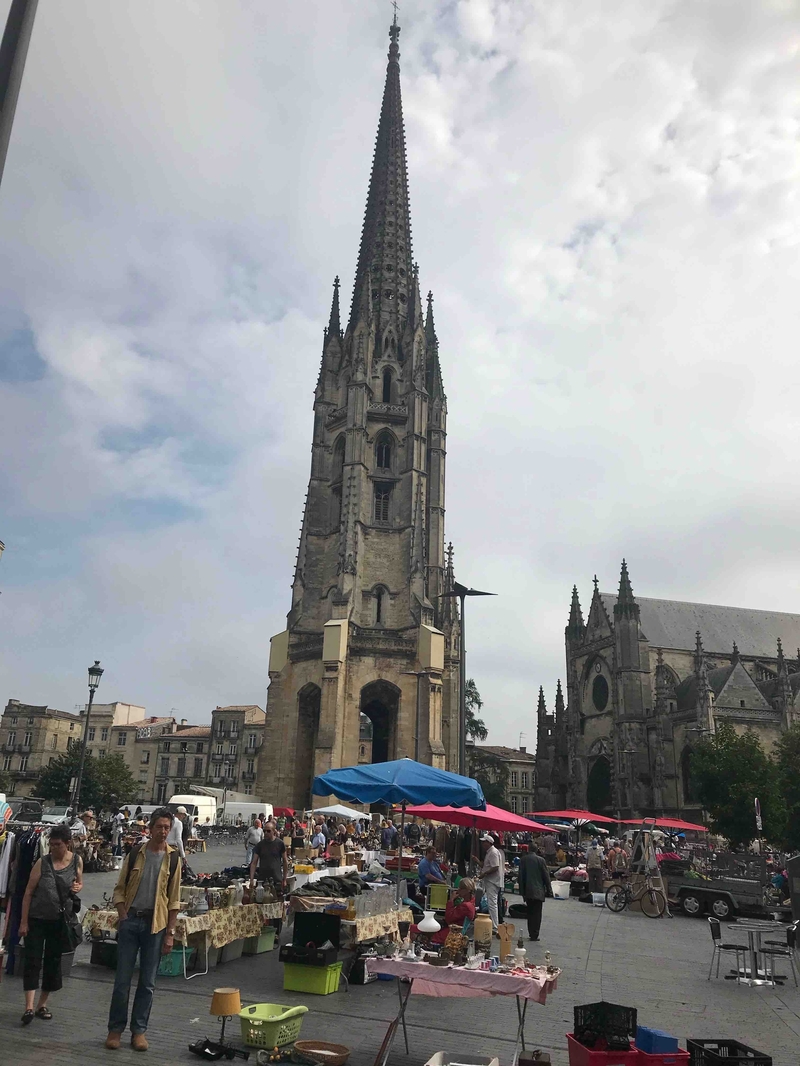 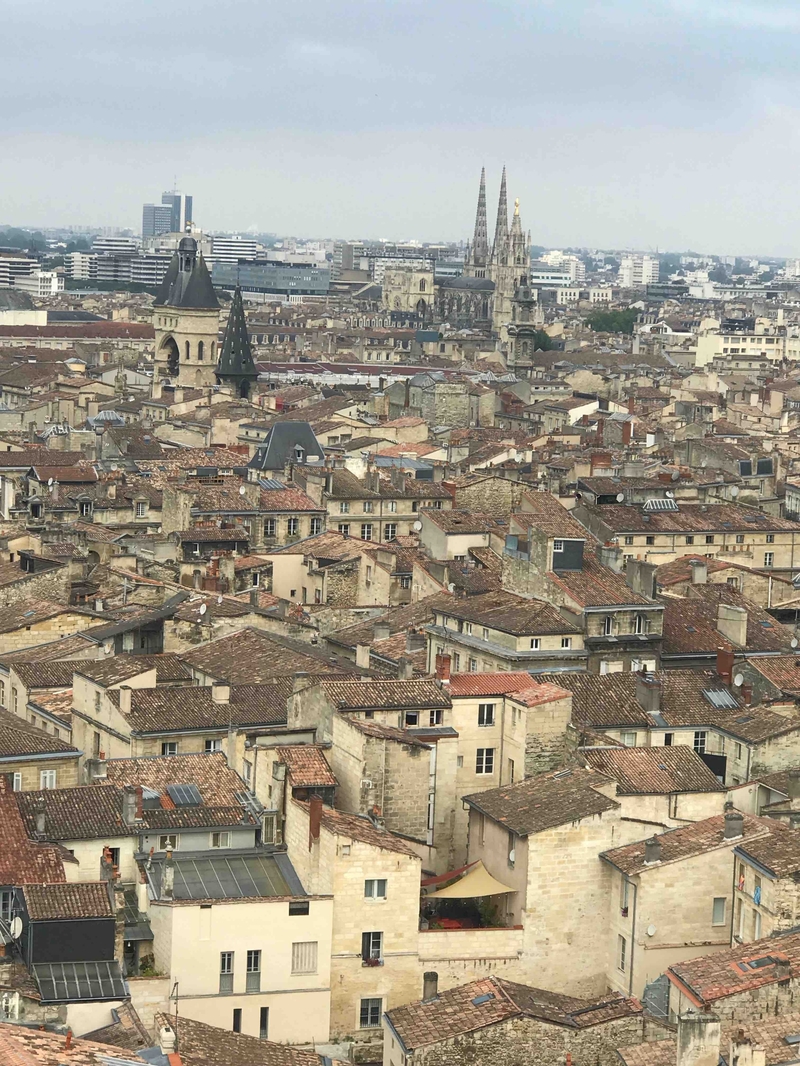 Get a masterpiece fix at the Musée des Beaux-Arts

One of France’s finest art galleries, built in 1881, has reopened after several years of renovation and offers an eye-opening primer in European fine art. The collection is housed in two glorious, separate wings – the south devoted to art from the 16th to the 18th century, and the north the 19th and 20th centuries.

Neil Sowerby stayed at the environmentally friendly Hotel Vatel, 4 Cours du Medoc, 33300 Bordeaux, and, the Ryanair flight scheduled to arrive inconveniently near midnight, at the Mercure Bordeaux Airport Hotel, a 10 minute walk from the terminal. Rates from £74 a night.

He flew from Manchester to Bordeaux with Ryanair.

For full Bordeaux tourism information visit this link and it’s worthwhile taking advantage of a CityPass, which includes transport on those excellent trams.

It comes as a shock to first time visitors to Bordeaux that the world famous vineyards are quite a way from the city proper.

Read more here - ‘Chateau chic in the heart of the Bordeaux vineyards’.

Manchester International Festival 2021: Big Ben in Piccadilly Gardens
What you say
Got an account? Login, to comment/rant.
0 Opinions
Read Next
● / Beauty