'Who wouldn’t want to dip their butty in that?' - The Blues Kitchen, Quay St, reviewed

“Why do I like this so much?” I groan as I scrape my pinky finger around the inside of the cast iron ramekin to get to the last dregs of hot (now cold) spinach and artichoke dip (£7.50).

Sod milk and honey, this is what I want to bathe in.

I can’t decide if its secret is the layers of umami from the key ingredients or its notes of packet soup. It’s served with apparently house-fried blue-black tortilla chips, they’ve got the snappy texture I sometimes achieve when undercooking homemade poppadums but I kinda like that.

There’s something kitchen sink about this swampy dip. I imagine it would be served up at a social hosted by Peg Boggs the Avon Lady in Edward Scissorhands. I suspect I’ll never drink here again without ordering it.

Unfortunately, the drinks we have ordered to go with it have still not appeared half an hour later. For such a slick operation, it’s odd that a link in the bar’s table service chain has gone so awry so early in the evening. Two people have since asked if we want to order another drink, to be told we already have, a third has taken our payment and the dip has long been devoured. The drinks arrive eventually.

The service otherwise is good; American-style friendly, just on the charming side of irritating. A few minutes after I’d parked my arse on the world’s most uncomfortable bar stool that constantly spun me away from the table like a Pilates contraption, a server had appeared. Dressed in an oversized marl grey hoody, I wouldn’t have known he was staff unless he’d taken my drinks order. That’s the thing at The Blues Kitchen, the staff look like the punters. They don’t do uniforms, man. Before long I’d heard all about the funk band he’s in. I suppose if I squinted enough, he could resemble a young John Frusciante.

We almost don’t get to eat either. Arriving at 6ish on a Tuesday on an after-work whim, the restaurant is fully booked. The efficient young person on the desk takes my number in case a table comes up and as luck would have it, it does, around 8pm - later than I’d normally eat on a weekday but we have been trying to get into The Blues Kitchen for dinner for months so we grab our chance.

We’ve been to a bunch of gigs here (the bookers really know their stuff although I don’t love the impractical shape of the upstairs venue or its insistence on red lights on stage) and every time tried to book pre-gig dinner with no joy. We’d tried on non-gig nights too, no dice. This place is popular.

The bar looks amazing, decked with all the gorgeous tiles you’ve added to your Pinterest at once - with a stained glass roof and art deco monkey lamps for good measure. On the restaurant walls hang charming vintage-style posters of blues and soul legends like Robert Johnson (“Play guitar like Robert Johnson, one easy lesson overnite”) and Ray Charles. So I’m a bit surprised when after dinner the band on the bar stage are a young white trio playing Fleetwood Mac covers - more cruise than blues tbh.

If the bar guy is John Frusciante, the fella serving us at our booth for dinner is Plan B, all youthful swagger. He says he’ll personally pay for the chicken burger I order if I don’t like it.

The food is pretty much what you’d expect from an American-style diner but better than it could probably get away with being. We’re steered away from ordering a big platter of short rib so my boyfriend bagsies a French dip-style brisket baguette (£14.50). It's is a strong effort but the ratio of carbs to meat could be more generous. The pot of gravy on the side reminds him of the stuff that comes with IKEA meatballs, but I say it’s a classic “biscuits and gravy” style (Denny’s, not dog food). Creamy, sausagey, salty, who wouldn’t want to dip their butty in that? I borrow some for my chips without waiting for permission.

I put Frank’s Red Hot on pretty much everything so a hot chicken buffalo sandwich (£12) is my midweek artery-thickener of choice. It’s a juicy thigh with good crunch from the coating, decent heat, nice and salty like me. A generous slaw and pickles balance things.

Think you’re going to redeem yourself with a side salad? Think again because the USA authenticity continues on that front. Our buttermilk ranch salad (£4.50) is a pot of dressing with some veg floating in it and welcome confetti of fresh dill. Our other side dish (£4.50) has no business being healthy, an overflowing pot of molten cheese and pasta with a golden top. I find some mac and cheese a bit too béchamel bland but this one has the pull factor and something mushroomy I can’t place (could it be the return of that packet soup mix?) makes it a mac daddy. When restaurants start having to put calories on their menus (boo hiss), The Blues Kitchen might be in trouble.

There’s no chance of us managing dessert without risking a haemorrhage - though someone on the next table is having a Meg Ryan moment over some Oreo donuts. I grab a glass of Fog Mountain Californian Cabernet Sauvignon (£9 for 175ml, pricey but ten times better than the house Monastrell) with all the blackcurrant and liquorice flavours I desire, he grabs a beer and we manage a few songs of the house band before waddling home.

All in all, I was worried this was going to be crap but I was very pleasantly surprised. There isn’t a huge amount of room in my life for American burger and BBQ joints but I can see myself sliding into a booth at The Blues Kitchen’s diner again soon - if I can get a table that is. 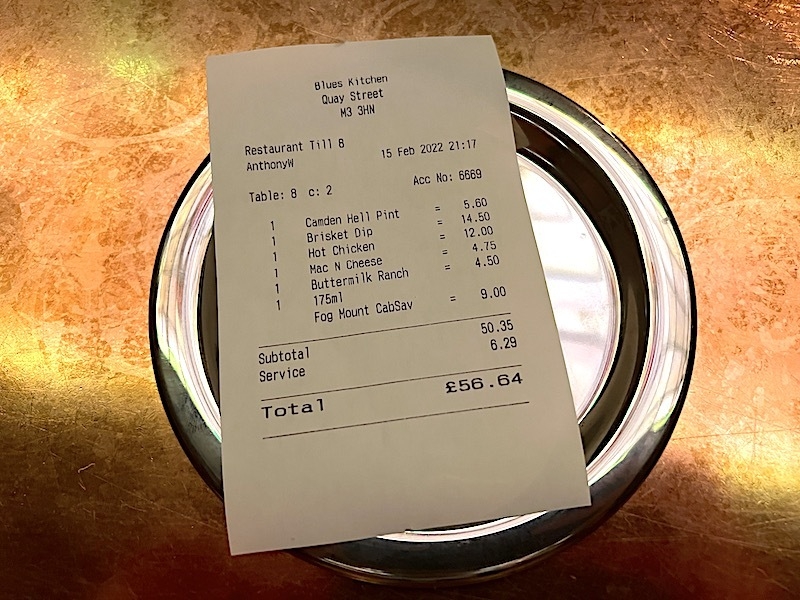 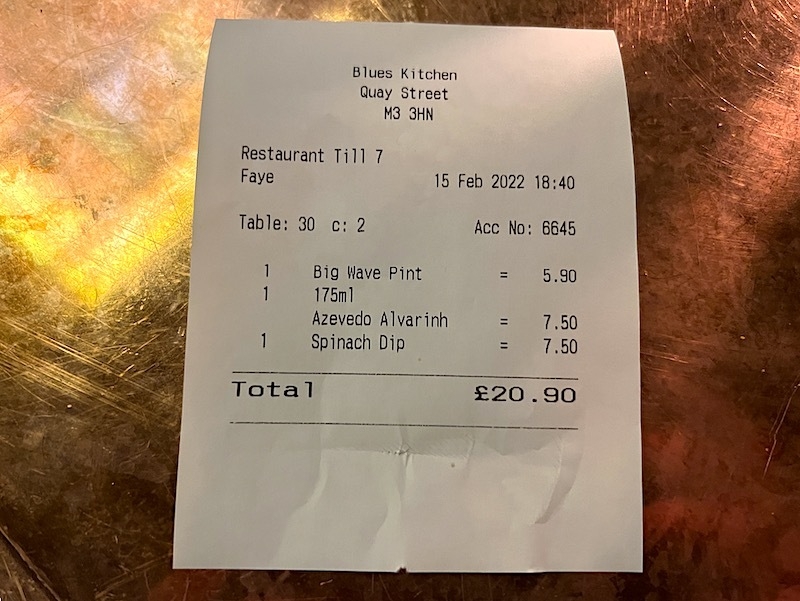