With its burgeoning skyscraper skyline, Manchester in 2022 is all about the new. A quarter of the way through the year and team Confidentials has already written about over 50 new restaurants and bars due to open in the city. Polished and PR-savvy brands trumpet their arrival while sadly, swathes of existing ones continue to close. These are times of change for Manchester, the good kind and the bad.

If restaurants like this die out in the rush for progress, it will be a crying shame.

So I find it comforting that some of our city’s restaurants have quietly pootled away for over half a century. The Armenian Taverna, at 54 years old, is one of these. The things it must have seen.

I had popped in a couple of weeks before I reviewed it - my first time in over a decade and also under the current ownership. Nine years strong already, Arman and Arusyak are the third owners to take the mantle.

It’s had a bit of a refurb since I was last in, the cave-like appearance and colourful wall murals have gone. It still cries old school though, with framed artworks and photos of celebrity visitors remaining. I am charmed by the satiny patterned tablecloths and cut glassware, like eating at a really fancy nana's house. My previous visit was with Marko from Bundobust whose Ukrainian heritage was helpful when choosing dishes. I made it my duty to return with my reviewing head on.

Wine experts will tell you that Georgia (no, not France) was the birthplace of wine. Its neighbour Armenia boasts the world’s oldest winery but you won’t find many wines from either country on the average wine list in Manchester so the wine list here is a rare opportunity to try them. A lot of wines from this region are matured in amphora, those gorgeous vase-shaped terracotta vessels.

Embracing tradition, we try an Armenian amphora (and oak) aged wine (£65 - 2015) from Vozkevaz, one of Armenia’s oldest wineries. It’s made from old vine grapes of the hakhtanak variety. What do you mean you’ve never heard of it? It’s a vast improvement on the far cheaper (though certainly not cheap) house red, and its price markup is actually really low so it’s worth splashing out on if budget allows - plus you get a bit of decanter swirling showmanship at the table. It’s smooth but intense with plummy fruit, baking spice and a definite smokiness which would work a charm with any of the many kebabs on offer.

I don’t normally like a long menu, but in restaurants like this, I have to make an exception. Nowhere else does this cuisine in Manchester, so there's a lot of ground to cover. The menu is helpfully split into veggie and meaty sections which makes it easier to navigate. With four of us for dinner, we managed to make a good dent in the menu.

If you order one dish here it has to be Yerevan khachapuri (£9.95) - named after the capital of Armenia. An eye-shaped, puffed bread, like a bolshier brioche. It’s filled with chopped basturma (cured beef), a molten three-cheese mix which includes mozzarella and feta, and an almost raw egg. The idea is to mix it all up with a couple of forks to bind all the lovely stuff together. Turns out even the old school restaurants can provide an Instagram cheese pull moment. I’m not sure I could eat a whole one of these to myself but shared between a few people you’ll be fighting for the last piece.

On the lighter side, an Armenian salad (a bit pricey at £6.25) features Salford fridge staples cucumber, tomato, red onion and rocket in a herby dressing. Panirov borek (£5.50) - spinach, cheese stuffed filo cigars - and lamb kofta (£6.50) are both fine but unremarkable. I would have liked more cheese in the borek. The tangy cabbage slaw that come with these - and pretty much every dish - deserves an honourable mention though.

The aubergine dip Mutabal (£5.50) has a denser texture than usual and is heavy on the cumin - an Armenian flourish. The quartered pitta that comes with it isn’t enough bread - especially if you’re sharing. We criminally neglect to order lavash - a traditional wafer thin flatbread. Don’t be like us.

My favourite starter is selodka pod shuboy (£7) which roughly translates as “herring under a fur coat”. I spent years as an EFL teacher and unsurprisingly we spent a lot of time talking about food. Ever since I heard a young Russian woman rhapsodise over this dish - traditionally served at New Year, I have wanted to try it. I know herring is not for everyone, but I compelled everyone at the table, reluctant or not, to give it a whirl. There were no complaints. Imagine the best potato salad ever, rainbow layers of beetroot, potato, carrots, peas, sweet pickled herring and egg all doused in mayo for a spectrum of flavour. Is it me or are all the best dishes made up of layers?

Meat stuffed Khinkali (£15.50) are not a million miles from Chinese dumplings. Very obviously homemade with thick casings that you grab by the stalk and bite off in one - or risk getting the enclosed broth all down your top. But it’s the spicy red pepper sauce, adjika, that really makes them shimmy like Serj Tankian. I would put this on everything if I had a pot of it in my fridge.

Trchny (£14.50), a traditional Armenian minced chicken turkey kebab, is a refreshing change from the usual lamb but not as juicy. It’s served with thinly sliced roasted potato and sharp red cabbage slaw. If you want rice, chips or bread, you'll have to order them separately - we didn't need them.

Draniki (£11) are fried potato pancakes of Belarusian origin, topped with a rich, creamy mushroom sauce that makes them a bit soggy but I don’t mind. Similarly rib-sticking, Golubtsy (£13.95) are fat parcels of chicken, herb and rice stuffed cabbage in a smooth, tomato sauce and sour cream. This is homely comfort food that doesn’t make a big fuss but gently feeds you like family.

To finish, an incredible, warm, cinnamony wedge of “pakhlava” and a layered honey cake (both £6) are accompanied by proper Armenian coffee and herbal tea with a hefty whiff of thyme (both £2.50). Some preserved figs in syrup add to the almost unbearable sugariness.

You might think Armenia’s political history isn’t really required in a food review, but many dishes we consider traditional to surrounding Mediterranean countries actually originated in Armenia. Armenians will tell you this proudly and with the justifiable vexation of a people that has fought to hold onto its history. The Armenian Genocide resulted in the deaths of up to 1.5 million deported Armenians. The privilege of enjoying the bounties of this country’s ancient cuisine here in the UK shouldn't be taken lightly. Food is history, community, family and - really importantly - identity. The Armenian Taverna is the only place you can eat a lot of these dishes. That alone should be enough reason to visit.

I don’t go back to places often; my job requires me to explore new ones and Greater Manchester has hundreds of restaurants. But I have visited the Armenian Taverna three times recently and will go again. If I never eat another round of samey small plates as long as I live, I’m cool with that but if restaurants like this die out in the rush for progress, it will be a crying shame. 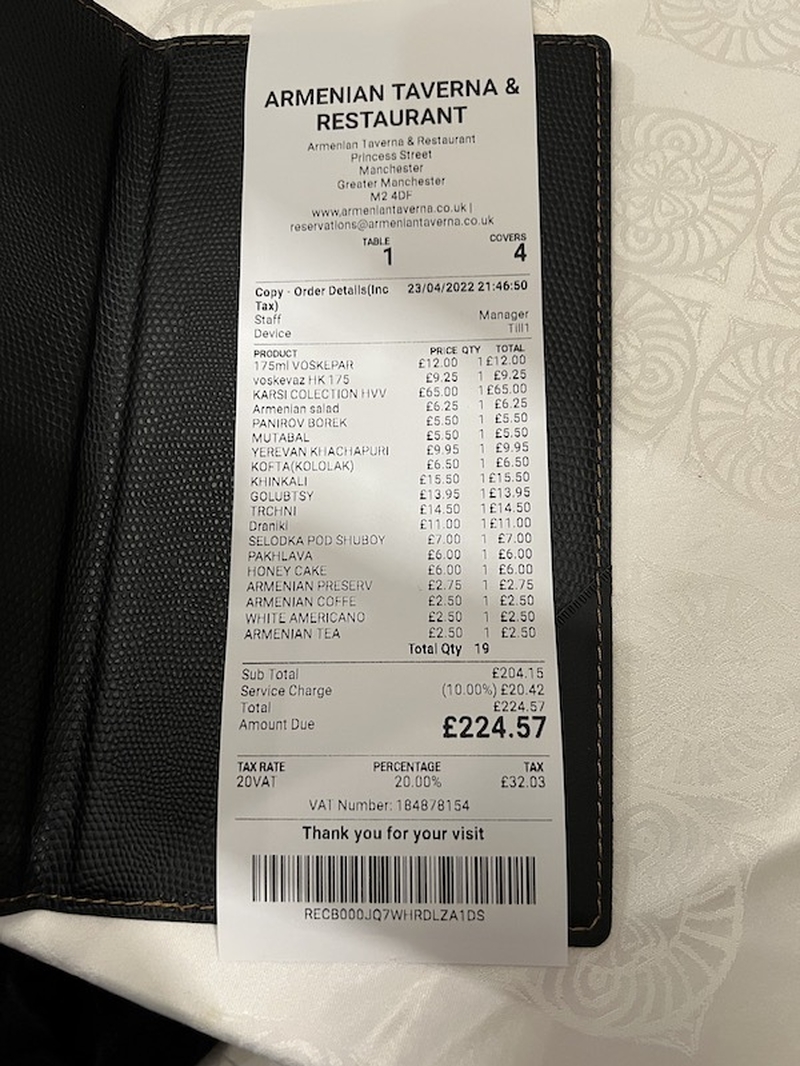