Tast Cuina Catalana opened in 2018 to positive reviews from everyone from the national press to, well, us. The big names behind the restaurant (Pep Guardiola et al) shone a floodlight on multiple Michelin star winning chef Paco Perez’s dishes, which basked in the exposure. Its top floor temple of gastronomy, Enxaneta, inspired whispers of another potential star for Paco. But while Manchester did win its first star in 40 odd years in 2019, it didn’t go to Tast this time.

After just over a year at the helm, head chef Miquel Villacrosa handed the baton over to Alejandro Calvo Maestro.

We caught up with the new head chef a couple of months into the job to see how he was getting on. 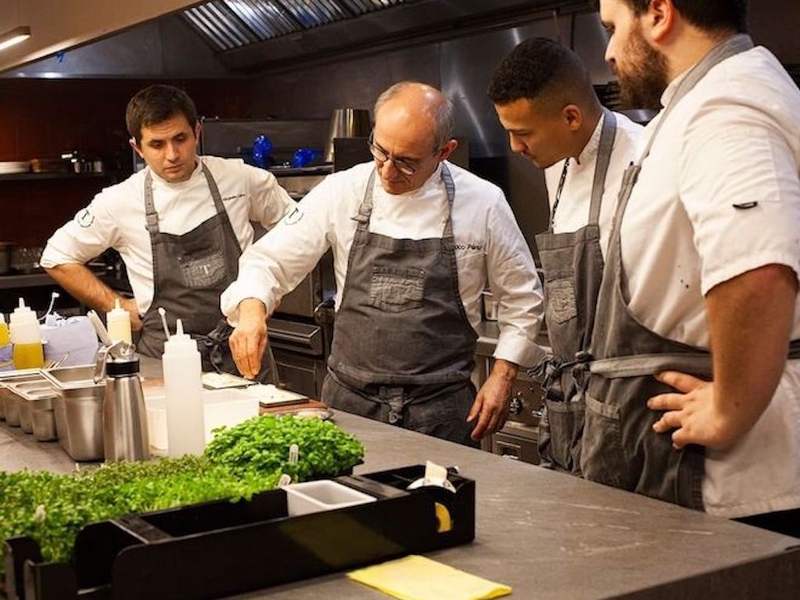 When did you decide you wanted to be a chef?

ACM “I was studying history at university nine years ago and I went to study hospitality in Toledo in the centre of Spain. I don’t know exactly why I wanted to change. I love history. I just think I’m not the kind of person that can be sitting all day at work. I need activity. I like that part of being in the kitchen. I’ve always loved cooking. I liked to cook in my mother’s home. I thought, ok let’s try to make it my profession.”

Tell me about your early kitchen experience.

ACM “When I finished school I went to intern at Hotel Arts in Barcelona. The first period of my internship was in Enoteca (one of Paco Perez’s restaurants) then I worked in other areas of the hotel before finally coming back to Enoteca. That was when I started to progress and work more with Paco. It already had a Michelin star but we worked very hard to keep it - it still has two Michelin stars.”

What were your impressions of Paco?

ACM “He is very close with his teams. When he enters a kitchen he goes to everyone to say hi. If he doesn’t know a person he says, 'Hey, how are you? Where are you from? What is your name?' He likes to know that his team is happy. He is a very good teacher.” 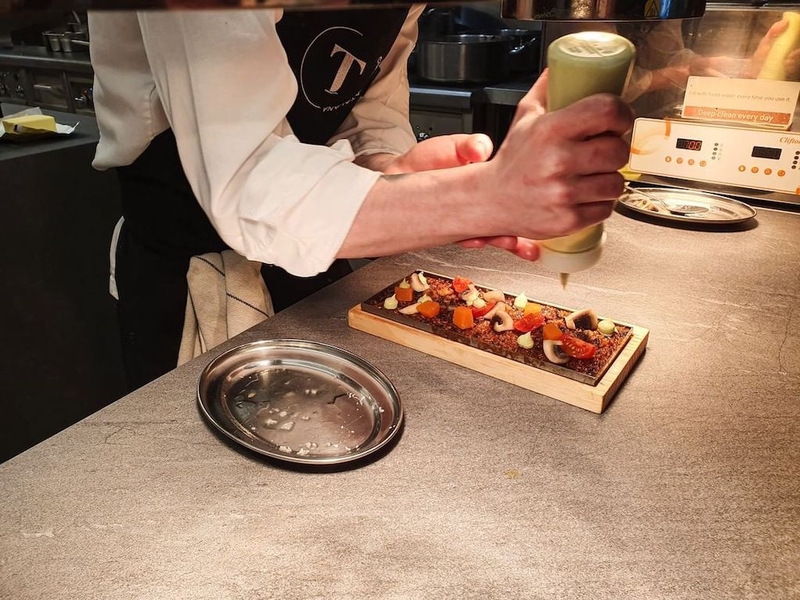 After Enoteca you went to Terra in S’Agaro?

ACM “Yes, Terra was the fine dining restaurant in the Alàbriga hotel. I started as one of the sous chefs in Terra, then finally they made me sous chef of the whole hotel. I was more focused in the gastronomic restaurant but I was also in charge of room service, events and other more casual outlets. In Terra, I worked with the head chef Antonio Arcieri - who still works with Paco - I was his second. We won the Michelin star there. Eventually I became head chef there when Antonio left.”

Is there a set approach you have to aim towards getting a star?

ACM “We try to do our job the best that we can, with high standards. They will come and see if it’s good for them or not. But the important thing is to try and do things perfectly. Consistency is so important - that you can come every day to eat and get the same quality of food. You have to ensure the quality of the product, a very high standard of service and finally they will come and give you the award. They never say when they will visit. Sometimes they come and leave don’t say anything. You don’t know they were here.” 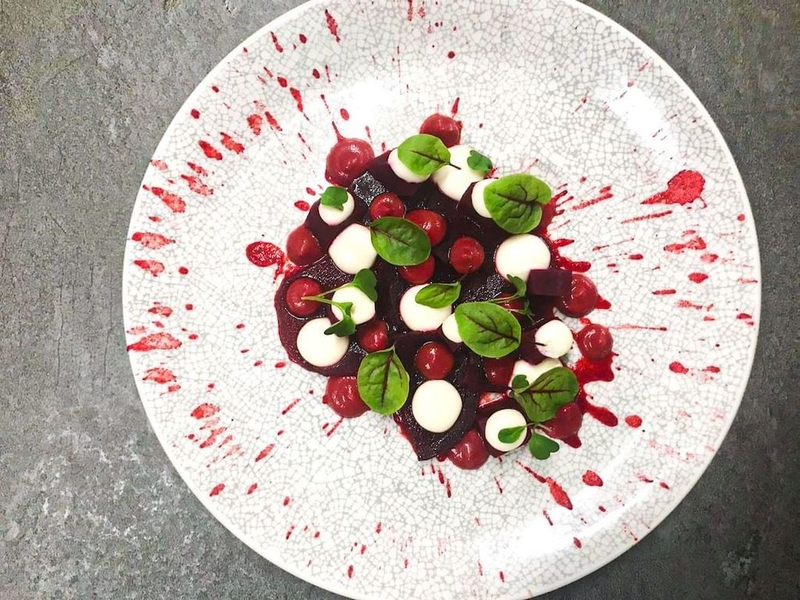 How do you feel about Manchester?

ACM “The climate is very similar to my city, Santander. It’s in a region called Cantabria, there are mountains and sea. Manchester is a city that’s moving up a lot, it’s a very open city. I like it.”

Have you had the chance to eat out in Manchester?

I’m trying. I want to go to Mana but haven’t yet. I went to The Bull and Bearand enjoyed that a lot.

What did you think of the TV screens?

It’s ok. It’s different but it’s nice. I like it. I think they’re trying to make a casual ambience. I’ve been to Iberica a few times. They also do a good job. There are a lot of places that you can go and eat well. I also like Chinese food, Chinatown I enjoy a lot.

Would you agree that world cuisine isn’t as widely represented in Spanish cities as it is in places like London and Manchester?

Yeah. It’s there in the bigger cities, Madrid, Barcelona. But not so much in the smaller cities. Nowadays there is starting to be a lot of Peruvian food in Spain, Mexican too, Chinese. Indian food is only in the bigger cities really. I like the Curry Mile in Manchester. When I go to live in different places I always try and find my basics. I like traditional food very much, stews, rice. When I move to a new place I try to find a place where I like the rice. Like, OK, this one’s my rice place. In the Mediterranean, we eat a lot of rice. In my city, not a lot, but I have lived in Catalonia for the last nine years and rice is super important there. The most used rice in Spain is the bomba rice. It’s what they use for paella in Valencia. In Catalonia, there are other traditional rice dishes like rice in a tin can which we do here at Tast. They use this type of tin to cook a lot of traditional Catalonian food.

Is Catalonian food quite different from the food of Santander?

In every region, we have different food. We use the same products but cook in different ways. Catalonia is more Mediterranean food and Santander is more from the Atlantic coast. In Catalonia they like to mix the flavours from the mountain and the sea, it’s called ‘mare montagne.’ In the mountains there is a lot of beef, for example, and they cook that with seafood. 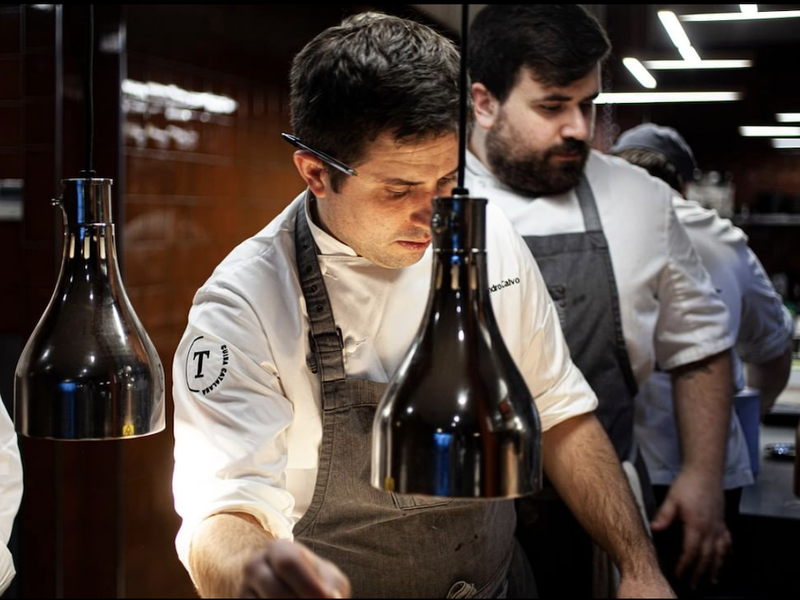 Who or what are your culinary inspirations?

ACM “One, for sure, is Paco Perez. I like to learn from everywhere and everyone that I meet They tell me, ‘My mum, my grandma, my father cooks like this’ and I always say: 'Let me try that.' I like going to a restaurant and thinking: How have they done that? Why are they working like this? I love Asian food and I take some inspiration from Indian food. I studied music also and when I listen to music it’s the same, I’m always learning. I play the flute. I’m the kind of person that likes to do a lot of things. I don’t think humans need to do only one thing all our lives. I can’t just sit and watch things happen, I want to learn and do.”

How is Tast different from other kitchen experiences you’ve had?

ACM “The nice thing about Tast is we have two restaurants and also the bar area. You need to manage different teams and different kitchens. We have two sous chefs and we manage everything together. I can’t be in all places at the same time so if they are there I know they will be doing exactly the same work that I would.”

Is anything going to change with you as head chef?

ACM “Before it was Miquel, now me, but ultimately it’s Paco Perez. The thing is to continue the same product, the same food and the same work. I’m not here to change anything. For sure, you can see little things, different ways of working, but the important thing is that we continue with the consistency of Paco Perez’s food and vision. He comes once a month to check everything here and I talk with him every day almost.”

Every day? I don’t even talk to my mum every day!