Walking into this tiny Spanish tapas bar in Hatch on Oxford Road (the Mancunian take on Borough Market) Gordo had a moment. It was one of those where what’s left of his hair stands to attention on the back of his head. He knew he was about to have a quality experience.

This gaff is tiny. It consists of two shipping containers bolted together, with an interior fashioned from materials rescued from an upmarket tip, resulting in an L-shaped open kitchen and bar in which there are 16 seats. There is only one table of four, the rest are hugging the window and the bar itself. A few tables are outside, but under good cover. That’s what flyovers are there for.

A bowl of these little pieces of heaven is enough to lift the spirits on a really crap, grey rainy day

The place is welcoming, feminine, soft and Spanish. It’s like walking into a painting. On the other side you will meet owner Anna Villegas, who is from Granada and, until recently, a biochemist from Manchester University. Cooking on the day is Ileana. “Hallo, I am from Argentina.”

Ileana has the sexiest voice in the world. “Yes,” she says, “Ileana Hess”. Gordo stopped himself asking if her grandad had any problems swimming to shore from the U-boat, whilst thinking that Ulysses would have broken free from the constraints on that ship if she had started singing; he would have thrown himself into the sea, doomed.

Anna has an encyclopaedic knowledge of the produce of Granada, both wine and food. Everything she does here is based on Andalusian cuisine. The table dequesos grenadine, a sharing platter at £12 delivered cured sheep cheeses (Guidax) along with cured goat and cow cheeses (Montefrio). They were gorgeous; the black olives were right little nuisances, jumping up and down for attention and deservedly so, whilst the conserves brilliantly curated and matched.

The other sharing board consisted of various cured meats, table de embutidos granadina (£12) with lush Serrano ham, an Iberico selection (lomo alongside a chorizo of personality without being vulgar, and salchichón) and the best saved till last, a white sausage and pork terrine massaged gently with garlic and a balance of salt and white pepper seasoning in the background.

Tapas were Anna’s croquetas de jamón and pollo (£4.50) smooth but biting with ingredients that proudly stood out. Tortilla (£3.80) a great rendition of this staple argued about in every kitchen in every town and every region of Spain. This one was a banger. And arguably the best value in the region. The knockout blow came from berenjenas fritas con miel - aubergine fries with sugarcane mollasses (£4.50). This ‘side’ is a movie star. A bowl of these little pieces of heaven is enough to lift the spirits on a really crap, grey rainy day.

The bread and olive oil are top notch.

As for wine. Gordo started off with a red vermouth out of the barrel on the bar. It was like drinking a celebration. It is wildly earthy, full of raisins and, dare it be said, Christmassy; come and get a glass quickly before Anna sells out. It’s only £3.50. Christmas Markets, you shifty-eyed bunch of fcukers, take note.

Moving on to a white wine, an unusual Moscatel dry white from Granada called Zacatín was a deep river of a wine, grown up fruit nipping out to take you by surprise, very different and, well, husky. Loved it. The reds that Anna are showing are great value, boxing well above their weight and all from her favourite region.

This place is a little gem, it scores well above where a gaff in a container under a flyover should. Go. Be a Manc, not a Mug! 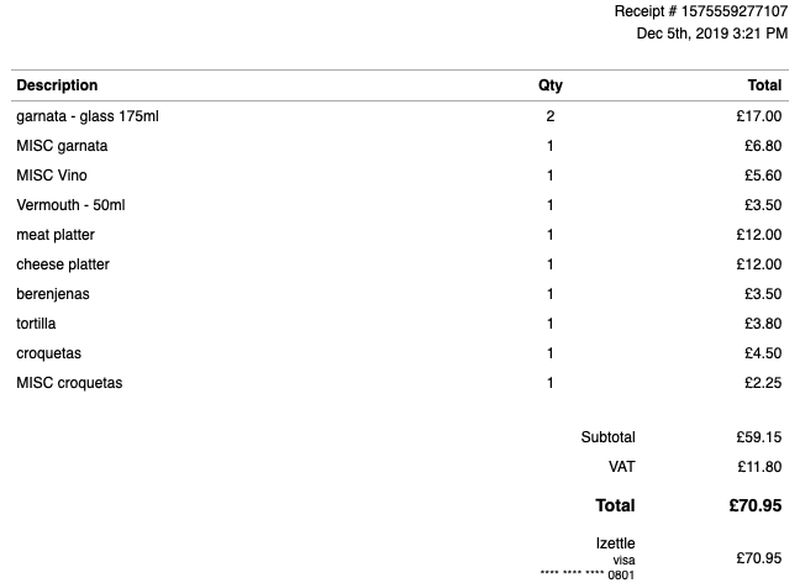