8 Fashion And Beauty Trends To Ditch In 2017

2016 saw a major trend for terribly bad news. Let’s get rid of that for a start.

Still, let's not dwell on the state of society at present, and let's talk fashion trends instead. And, before we get stuck into this listicle, can we all agree that we’ve officially reached the post-hipster age? Of course, the insufferably cool kids will always live long and prosper, but we are done with the commodified cool: the same-y haircuts, the ironic slogan t-shirts, the vintage tattoos? I think so.

Who are we to judge either way? We've been victim to a faux-pas or two ourselves. But we do find it healthy to hold a mirror up, take a good hard look at ourselves and say: “hey, take off the clear-lens spectacles, it’s time to pack it in.”

There may be a thing of too much perfection, here. The 2016 Instagram eyebrow - dark, bold and sharp-edged like a painstakingly drawn Nike tick - meant when it came to eyebrow grooming there was no room for error. They are incredibly high-maintenance, requiring powder, gel, concealer and a fine art degree to excel at making them evenly matched. I can’t get it right, therefore be done with them. Still, a wise-woman with great eyebrows once told me that eyebrows are not twins they are sisters, making the Instagram eyebrow incredibly unrealistic anyway (at least for me). Feathered, bushed, natural eyebrows are making a return – yes, the original Cara Delevingne brow. It’s as if to say screw perfection, here I am as Mother Nature intended (well, give or take a bit of pencil lining and powder) bushy and unruly. 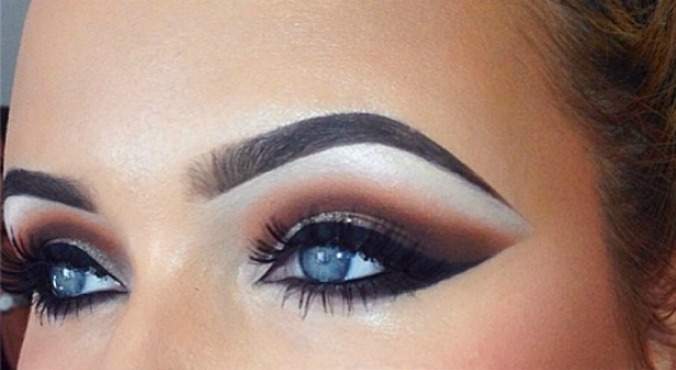 A little too perfect?

DRESSING FOR YOUR AGE

Instagram star Baddie Winkle is my inspiration - I say this nearing the end of my twenties, and in the hope I’ll always cling onto my youth. Comparatively, Baddie Winkle is approaching her nineties and is enjoying her Golden years, yet she dresses like she’s about to hit Factory nightclub, do a few narcotics and leave with the DJ. It’s a look I could never pull off – a look most of us couldn’t. Yet it’s more the sentiment I admire than her mismatched neon outfits and marijuana leaf earrings. Baddie Winkle reminds us that it’s boring to conform to any age-determined norm. A more salient example would be Helen Mirren who recently emerged with pink hair, and pulled it off with editorial chic. Dressing for your age is now taboo, in 2017 we dress for ourselves.

Another trend we can blame a Kardashian/Jenner for. Matte lipsticks became a lucrative career move for teenager Kylie Jenner who has been peddling her sold-out lippies for over a year now. Lips became matte, overlined and frustratingly dry as a bone as result. Granted, matte lipsticks will always be popular on the mouths of the fashionable but can the brains of the beauty sciences please invent much less drying formulas? You could light a match off of my bottom lip…

I’m pulling an Alicia Keys. I’m wiping it all off. I’m going barefaced. After Youtubers began contouring their cleavages, abs and the backs of their necks I decided enough is enough. When Alicia Keys began rejecting the heavy makeup trend she handed out a metaphorical facewipe to the contoured community. It’s a refreshing stance. In the past few years, makeup artists have convinced us that our faces are too wide and our noses too broad and we’ve adopted contouring to fake a bone structure and transform ourselves into entirely different people. It has doubled our getting ready time. Now of course, makeup is a fun and creative enterprise (Oh, how I love highlighters), however, we are at risk of convincing ourselves that we need more and more makeup to put our best face forward. Can we scale it back in 2017?

What disconcerts me most about these boots? The fact Kanye West thought his Yeezy plastic, perspex boots should cost in the region of $800 or that they are very expensive boots you can’t hide a bad pedicure in. Boots shouldn’t need double glazing, but I hear these plastic shoes can get muggy in the summer and draft-y in the winter. Many budget brands copied the Yeezy boots this year, allowing many fashion-forward women a chance to play around with the edgy style - they just had to bring little window wipers with them when their feet got sweaty. Again, they are not one for those in need of a chiropodist.

Who are you bullshitting, ay? I’m no mug. Yet advertisers are continually trying to convince us that drinking a few herbal teas for two weeks (while dealing with the laxative effects) and we’ll wake up a Victoria Secret model. Cursed those detox teas. This year we saw an influx of endorsements from both celebrities and bloggers who have been paid generous amounts to promote herbal drinks designed to help you get a flat stomach – most of which already have flat stomachs. I hear advertising standards are cracking down on these sponsorships. Good. If losing weight was as easy as just drinking tea then the British population would not be battling with an obesity crisis. Don't get me started on those teeth whitening kits either...

I’ve never listened to a Metallica album. Yes, I’m sure they rock. And while I really like the look of their ever-popular tour t-shirts, it’s a little disingenuous to wear a shirt from a band I’ve never listened to – don’t you think? At the same time, it’d be wrong to assume I haven’t listened to Nirvana if I wore one of their tees, but if I’m honest it’d be more appropriate to wear a shirt which reads ‘Smells Like The Only Nirvana Song I Know’.  It’s a difficult trend to police, as these t-shirts look fashionable on a lot of people. Yet in 2017 it would be great if we all wore the bands we actually enjoy listening, no?

The world of fashion is changing, or at the very least it’s being forced to change. Women in droves have been embracing a new trend which throws a middle finger up to shallow and blinkered ideas about beauty in favour of an all-encompassing self-acceptance – the fashion industry has had to respond. This year, we’ve seen plus-sized models such as Ashley Graham break the magazine mould, while model Winnie Harlow’s skin condition has been her USP in an industry which still struggles with ethnic diversity. The more beauty standards are challenged the more we’ve come to love our own individuality. This is important. Having body confidence allows us to get on the with more important things in life with an uncompromised self-assurance. In 2017, to wake up and say I love myself, as myself would be the most ground-breaking trend of all.

Winnie Harlow is a successful model with vitiligo