He's an author, punk rocker, broadcaster, public speaker, lion tamer, microwave repair man and demogorgon, amongst other things, and he's here to tell you why you need to see his band, The Membranes.

Reforming after a short 26 year break, the band recorded their last album, Dark matter/Dark energy, at The European Organization for Nuclear Research (known as CERN) in Switzerland, alongside friends who were researching the Higgs boson particle.

They got to know scientists there after sharing the stage at TEDx conferences and a mutual appreciation of left field music and deep space saw an unlikely bond formed. CERN have even played a few of the band's tracks in the Large Hadron Collider tunnel, and the band will be headlining a festival there later this year.

The Membranes' new album is due out in September and will feature a twenty piece choir made up of students from the local BIMM music college. The band has previously played with a choir they discovered in Estonia, selling out a number of shows in the Baltic state. Hooked on the beautiful and dark melancholy of these choirs, the band sought to combine their haunting voices with their epic, bass-driven, post-punk sound. The band will be joined by a Manchester choir on stage at O2 Ritz on 5 May..

The bill on the night is a real celebration of the UK's underground music scene, featuring The Lovely Eggs from Lancaster, who are racing towards a breakthrough with their quirky, wonk guitar rushes, and Evil Blizzard, a favourite of The Fall's Mark E Smith, who will be heading down from Preston in their unnerving rubber masks for a surreal live show. Also on the bill are The Cravats, One Sided Horse and Sink Ya Teeth.

4. The band have worked with Chris Packham off the telly

The band's upcoming (as yet untitled) album turns its attention to the beauty and violence of nature, and has been inspired by everything from the chemical dislocation of fungi to the twisted glint in the eye of a crow (really John? ed.). The album even includes a spoken word piece by Chris Packham of Springwatch and Really Wild Show fame.

The album comes out at the same time as my new book, The Art Of Darkness, an in-depth look at the darker end of post-punk music and the so called 'goth scene'. The book features a myriad of wild and fascinating stories, detailing the history of key bands who changed post-punk music.

Nothing to do with the gig, really, but I needed five...

The Membranes play Manchester's O2 Ritz on Saturday 5 May with Lovely Eggs, Evil Blizzard, The Cravats, One Sided Horse and Sink Ya Teeth (5-10pm) - tickets (£27.50) here. 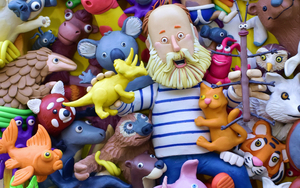