WYTHENSHAWE Pony Club is thriving, though God knows, it’s been a long wet winter. The horses wear heavy coats, like Barbours. A hundred metres from the M56 and you’d think you were in Cheltenham.

Civic is very plausibly in recovery. The Forum, after hesitant steps, stretching back decades, is busy, bright and welcoming. The pool and the library are big in the lives of kids of two or three generations.

The park does that. It baffles expectation. The farm, hothouses, athletics track, woodland and meadow; not to mention the timbered Tudor Country House, that could be anywhere in Cheshire, and actually is. Or was, until the law came one night, and robbed it. 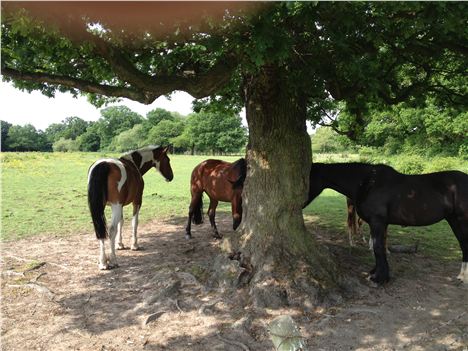 Giddy up in the rural plains of Wythenshawe

Wythenshawe is 11 square miles of north Cheshire governed (more or less) since 1931 from Manchester Town Hall, eight miles away. Small wonder Oliver Cromwell looks on so comfortably from his granite plinth, to see the tendrils of parliamentary governance slither so far. And in that is explained Wythy’s unruliness. Not so much a community robed of its rural heritage, as one rudely scooped up in the middle of the night and turfed, without ceremony, into an unmade bed. 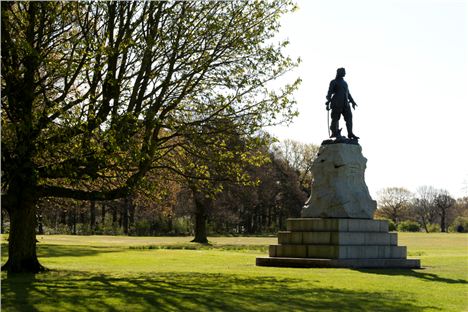 I’m in to my third decade overlooking Wythenshawe Park. I’m not in Benchill or Peel Hall. I’m in Northern Moor, which, some would say, is hardly Wythy at all. Though Sarah Ferguson had it that my neighbourhood is the worst place in the UK to live (The Duchess on the Estate, ITV 2009). Silly cow.  Two years earlier Ryan Florence made the front pages when, sensibly hooded, he pointed a five-fingered gun at the back of the head of David Cameron, who’d strayed recklessly close to Civic. I can’t say these are my people, but I can say this is my Wythenshawe.

Wythenshawe Hall is a bit of a botch-up. It would be a nightmare to haunt. You never know where the stairs are going and dinners would always be cold. Despite being gifted it by Lord and Lady Simon in the 1920s, you get the feeling the City Council had always hoped for something, well, a bit more modern. Back in the 1950s, City architect LC Howitt bashed it about and, frankly, treated it like an old shed. 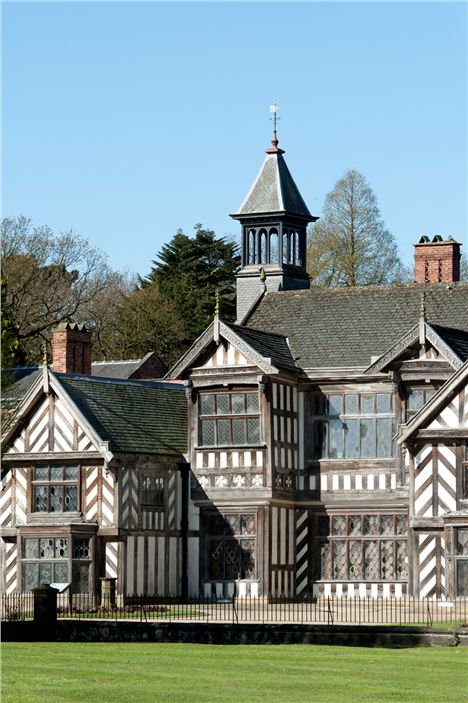 He made a much better job, from scratch, of the Tennis and Bowls Pavilion. It’s a single story affair, lifted up on a slim concrete platform, anchored by a thick tubular pillar. Sadly, Ryan’s generation rather took to it and camped out there, such that a rather beautiful twin-sided bench custom built for simultaneous double aspect spectating (bowls one way, tennis the other) had to be removed. Presumably, to discourage habit-forming sitting. The Courtyard café is open at weekends in winter, and every day from Easter to October. The Hall has regular open days, staffed by volunteers. I can have nothing but admiration for the way the park performs in very hard times. 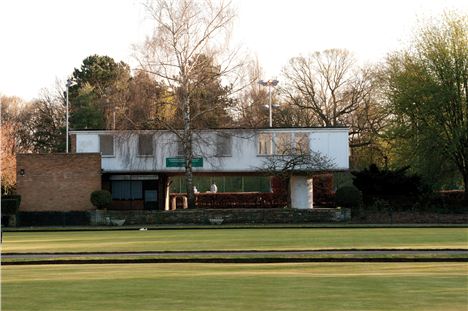 I don’t think much of God’s admin, but I’m rather fond of his offices. There are three in Wythenshawe that are outstanding. St Francis on Chalford Road in Newall Green is shut up and knackered now, which is a shame since the original design, from 1957, is by architect Basil Spence, who was cooking up Coventry Cathedral at the time. I think it rather fine, but my friend, the Wythenshawe writer and dairyman Tom Molloy, well known for the respect he has for his home turf, tells me I’m mad. You can read a review of Molloy's first book by Phil Griffin here.

Bear with me on this pilgrimage.

From my kitchen window, I can see the massive concrete cross rising from the roof of St Michael and All Angels on Orton Road. Seventy-six years ago this was the first new Anglican Church in Wythenshawe. The weight of the cross nearly brought down the flat concrete roof. Angels might weep. All one hundred and twenty eight of them, each hand-painted on the beautiful full-height window. The church is a star, and star-shaped. The architect is NF Cachemaille-Day, who was good at his job. (See also St Nicholas on Kingsway, in Burnage).

Least I give the impression that Wythenshawe is some sort of Christian theme park, let’s head to Civic via Lawton Moor Road. The war took place between Nos. 156 and 158. Building stopped in 1939. 156 has what’s called a hipped roof and a raised line of fancy brickwork between ground and first floors. 158 has a gabled roof and no decorative brick. Once you spot the difference, you can date the whole of Wythenshawe. 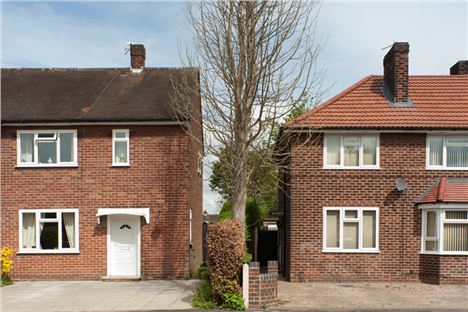 Left on to Moor Road…if only.

Metrolink will be good for Wythenshawe, but the price has been horrific. And I’m not only counting the trees. So far as I can tell, the main contractors could take lessons in community liaison, PR and common courtesy from North Korea. Roads, pavements, hedgerows and trees of a settled, mature community have been ripped up or railed off. Ryan Florence would have been back on the front pages for less.

On to Southmoor Road, past the empty Habitat shed, that helped change the shape of the nation’s week. Manchester had the first Habitat outside London (on John Dalton Street) and this was their first out-of-town store, complete with café and indoor playground. The thing is, they would keep breaking the law. In Wythenshawe. Fancy that. They kept opening the store on Sundays, which saw the manager in court on many a Monday morning. Habitat used their Wythenshawe store to challenge the Sunday Trading laws.

I once turned a corner in Habitat to see a bloke shoving duvet covers under the baby in the buggy. Our eyes met. Twenty minutes later he sidled up to me and said out of the corner of his mouth, “Thanks pal. Let us know if there’s owt you want”.

Left onto Hollyhedge, right onto Greenbrow, on through Tin Town. My friend, the musician Bruce Mitchell grew up here. Wythenshawe’s rock & roll legacy is the strongest in the city; Slaughter and the Dogs, Barrett and Rossi, Ed Banger, Paul Young, Tosh Ryan and Rob Gretton, Durutti Column, of course. 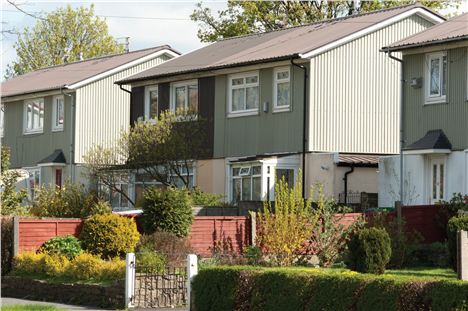 Bruce’s dad was a teacher in Didsbury. The lad was asthmatic. The family doctor recommended a move to smoke-free Wythenshawe, for the good of the boy’s health. In 1946 they arrived in their brand new two storey prefab, double aspect, pear and apple trees in the garden. Temporary dwellings, of course, built to ease the chronic housing shortage, post-war. They’re still here, cheerfully fit for purpose, more like seaside chalets than council houses. And this is blossom time, and Wythenshawe will soon be cherry pink.

Loop Greenbrow all the way around to Simonsway, and on, over the motorway to Civic. My dad, who supplied newsagents with their papers, hated going to Wythenshawe. He always got lost. Being a man who sometimes needed directions to his own bathroom, this was not such a ball-breaker.

So saying, Wythenshawe and the motorcar have a strange relationship. No garages. On street parking forced in, at the expense of grass verge. Conceived as Garden City in the 1930s, cars for everyone was not even on the horizon. 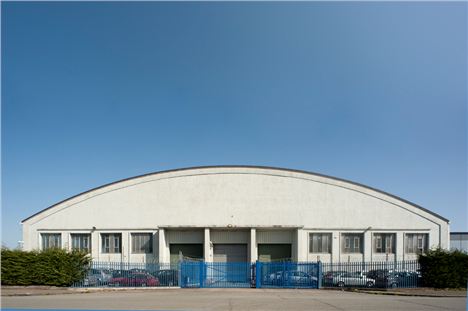 So saying, The Parkway was a design revolution unique to Wythenshawe. The family car would by the elegant weekend get-about. No railway link. A big concrete bus garage in Sharston, completed in 1942, just in time to be commissioned for the manufacture of Lancaster Bombers.

Civic is very plausibly in recovery. The Forum, after hesitant steps, stretching back decades, is busy, bright and welcoming. The pool and the library are big in the lives of kids of two or three generations. There stood the Golden Garter, cue a thousand memories of beer, cigs and Cannon & Ball. And, for me, The Four Tops, 1976, in the best possible form, Bernadette! 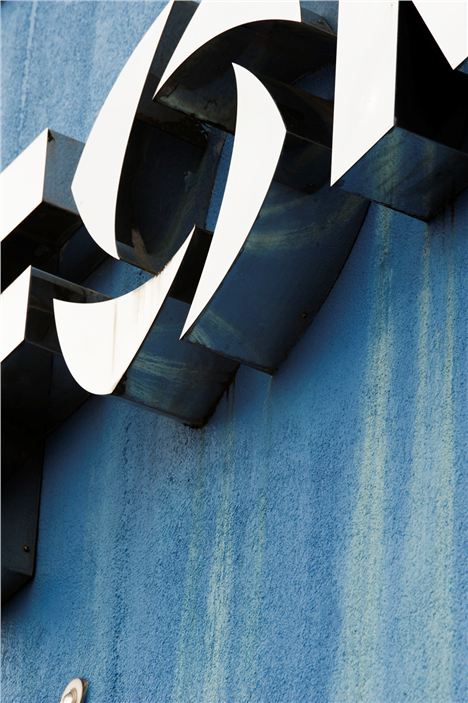 They call it Civic. Not The Civic Centre. Not even The Civic. I think Civic is a title reminiscent of Free Trade Hall. An enthusiastic nod in the direction of shared experience. Sad that there’s a quite hideous new (Wilkinson’s) building utterly misplaced at the end where the flats used to be. Also that unquestionably the worst building in Wythenshawe, the Police Station, is next door.

Down the interior street created by Asda. Plenty of room for ladies to fight over bargains or fellas. Cross the virgin tram tracks to a wedge-shaped building with a shallow sloping roof, which just happens to have one of the most surprising and satisfying interiors in all of British architecture of the last half century.

William Temple Church is fifty years old next year. “I don’t get it Phil”. Come inside Tom, walk this way… In all those years, there hasn’t been a better parish church built in Britain.  Inside, after a silent two minutes, Tom says,  “Now I get it Phil. And for once, you’re right.”

Forgive me Revd. Stephen, I don’t believe in God, but I do believer in GG Pace, the brilliant architect of this extraordinary building that somehow unifies celestial and industrial. William Temple Church is most certainly open for business, even if your business is just to look around, which I can’t recommend highly enough. Sadly, like all churches in the present day, it isn’t open all the time, so choose your moment. 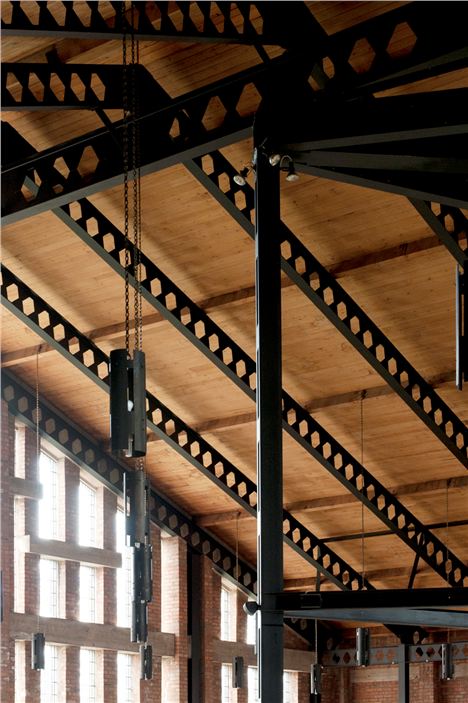 Sad too there isn’t an outstanding pub to recommend around Civic, though most of them do appear to have their supporters. Nick Condron’s Deli 19 is where the discerning Civic punter gets lunch. Because the coffee’s good, the sandwiches great value, and the cheesy scrambled egg sublime. And because Tom Molloy has just got a proof copy of Hale To Mumps, his new book of 'Slices of Manchester life'. And also because I’ve just read the first sentence, and there’s a mistake. I just know I’m going to love it.

There are way too many fierce dogs, crap takeaways, bargain boozers, skunk users and lost people. Show me a post-war council estate outside London where this isn’t so. I have no wish to lift the corner of any carpet and shove any of it away. What I would like to do is point to my Wythenshawe hot-spots, and to clap loudly and often, the very many people who make this a place way, way beyond ordinary. 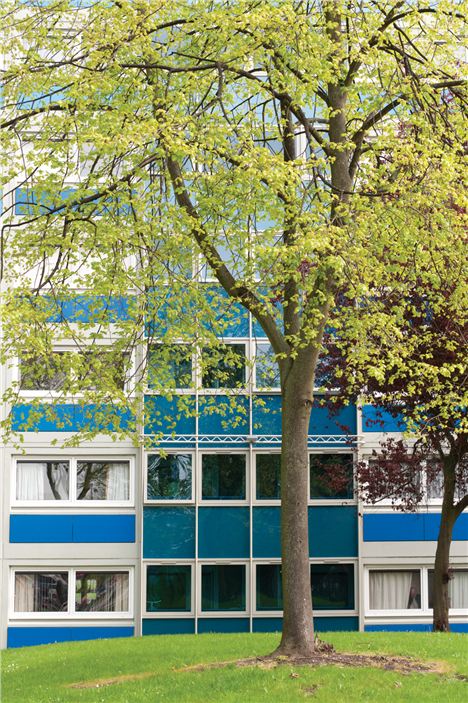 Afflecks is back and needs your support
● / Best of MCR

Lockdown wine tastings - who's doing them and how to get involved

Lockdown wine tastings - who's doing them and how to get involved