KEEP Portland Weird’ says the parking lot sign opposite Voodoo Doughnuts. I’m feeling like Mr Straight as I clutch my stash of kala namak Indian black salt when it could have been designer weed.

Personal consumption of cannabis is legal in Oregon; in its largest city I have resisted the temptation to get high on a brownie infused with the stuff. They even sell ready-rolled joints in specialist dispensaries such as Nectar. Weirder and weirder.

I have randomly rejected, too, a Voodoo Homer Simpson tribute doughnut (creator Matt Groening is a Portlander and several of the cartoon’s characters are named after its streets – Ned Flanders, Milhouse and the like).

Anyway, Blue Star is the hipster doughnut of choice here, I’m informed. I understand why when I scoff one of their lauded creations – a riot of intense chocolate, cream and brioche. The wonder of it is captured fully in a local website’s Deconstructing Blue Star’s Valrhona Donut.

Portlanders are this intense in celebrating their fixations on food, wine and, above all, small  batch coffee roasts and hop-crammed craft beer. Oh and salt is more than a footnote if you visit Mark Bitterman’s two sodium chloride-centred delis called The Meadow. Conveniently, one of them is up on resurgent North Mississippi Avenue next door to a Blue Star cafe. It was here I bought my kala namak and a couple of Bitterman’s books – one on salt naturally, the other on cocktail bitters. 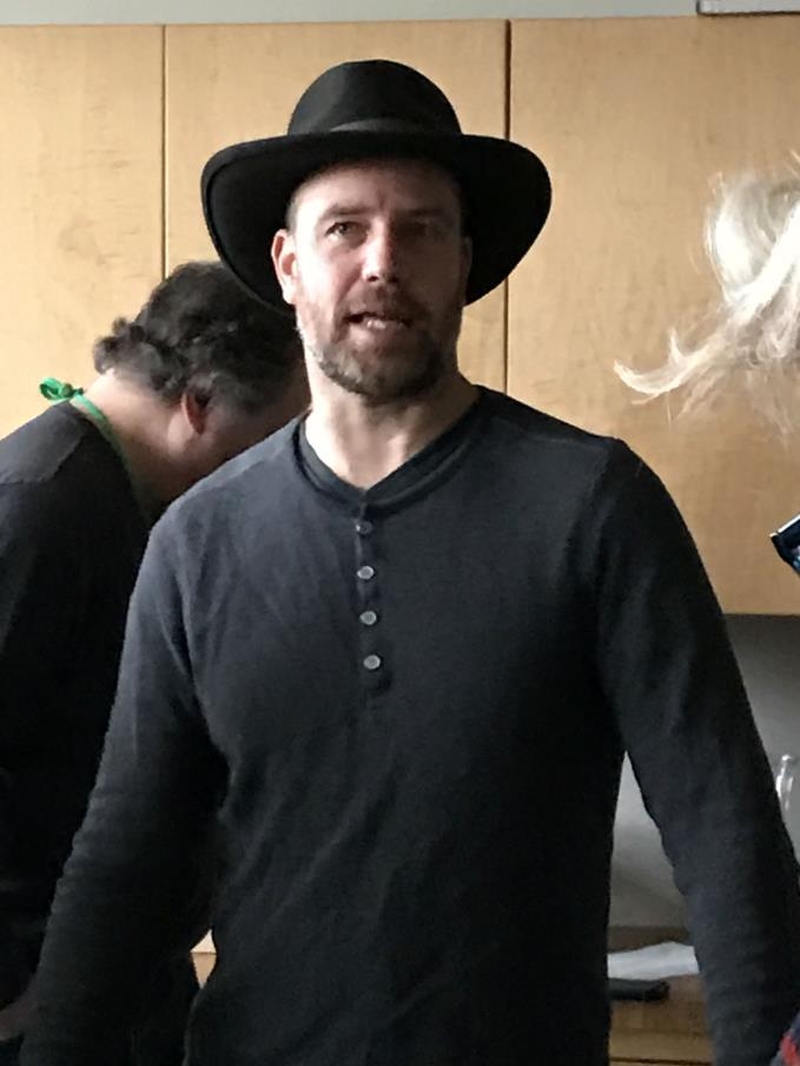 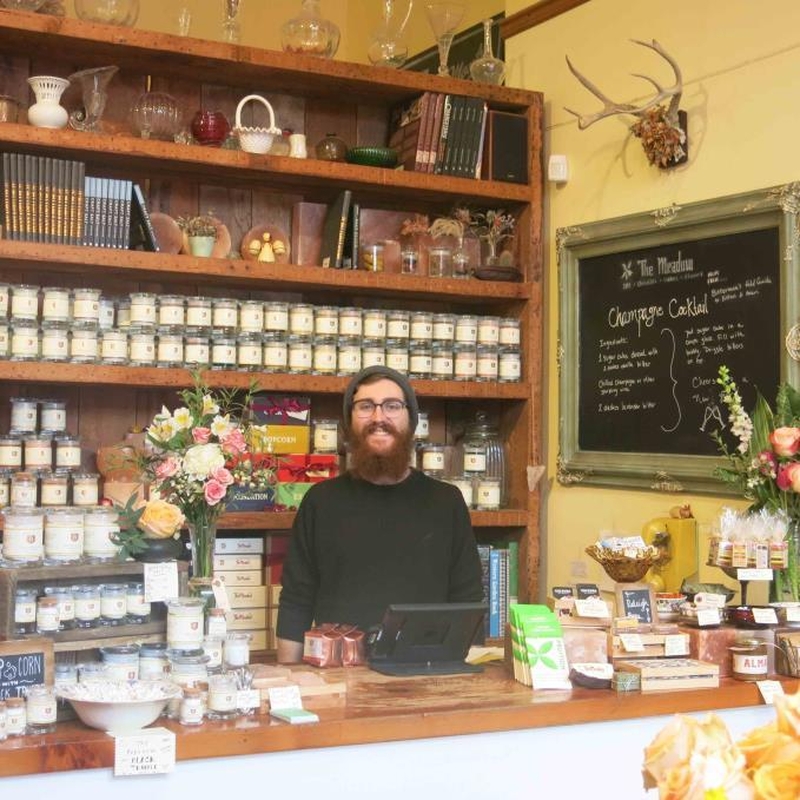 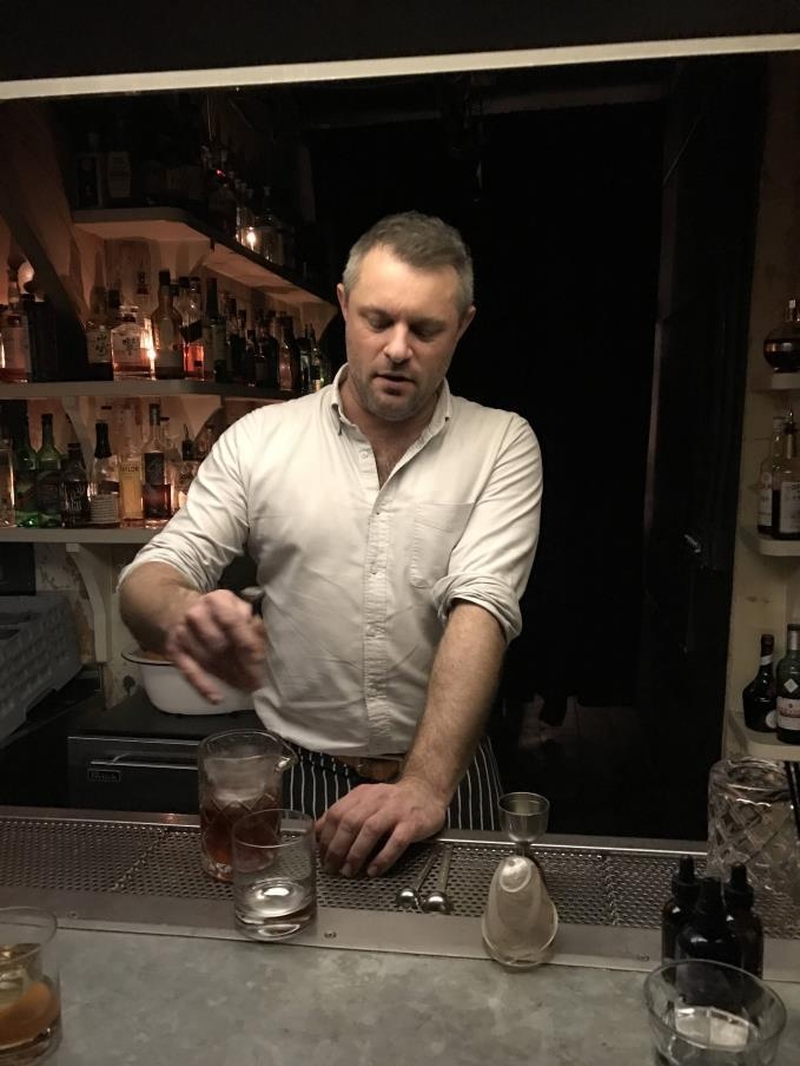 In it he namechecks another Portland legend, Jeffrey Morgenthaler, mixologist at the downtown Ace Hotel’s Clyde Common bistro and Pépé le Moko speakeasy.

We were staying at the Ace, a retro/industrial lodging that has set the template for hip hotels across the globe, and I couldn’t resist begging its cocktail high priest for one of his celebrated barrel-aged Negronis.

Cocktails are all very well – and spirit lovers should check out the clubby Multnomah Whiskey Library, which boasts more than 1,500 global distillations and rolling cocktail carts – but craft beer is synonymous with Portland, which boasts more indie breweries than any city in the world and a bewildering array of US guest beers in its bars.

To get your beer bearings I’d recommend Bailey’s Taproom at 213 SW Broadway with its 25 rotating taps or the more atmospheric Deschutes beer hall in the chi-chi Pearl district, where you can pair a plate of line caught Coho salmon with a pint of their uber-hoppy Pinedrops IPA, which delivers on the nose what it says on the clip.

Both these places are a short amble from the Ace. Keeping Portland weird, walk up to 901 Salmon Street and gaze up at a whole salmon swimming through the corner of a brick building. It’s an 11ft long bronze sculpture called Transcendence, high above a seafood restaurant. 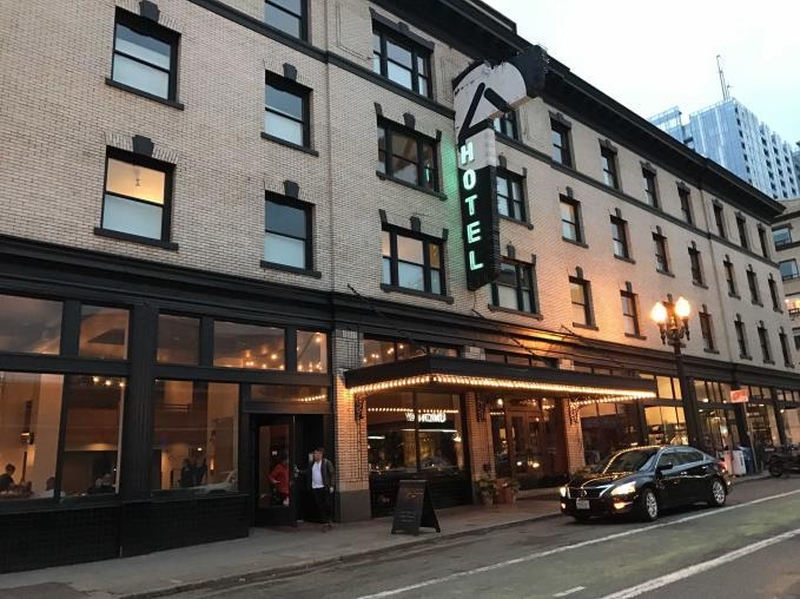 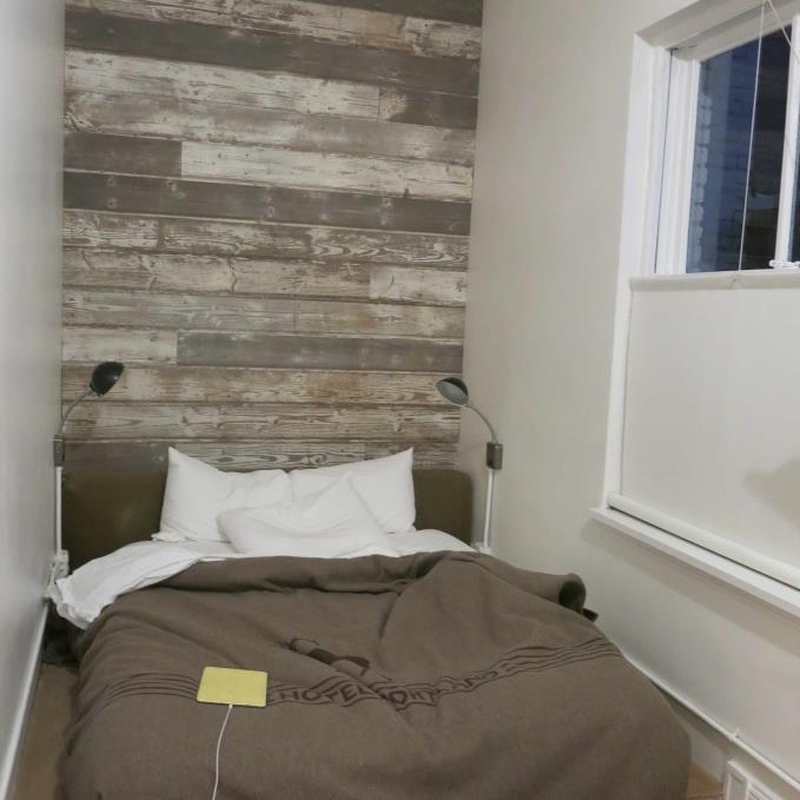 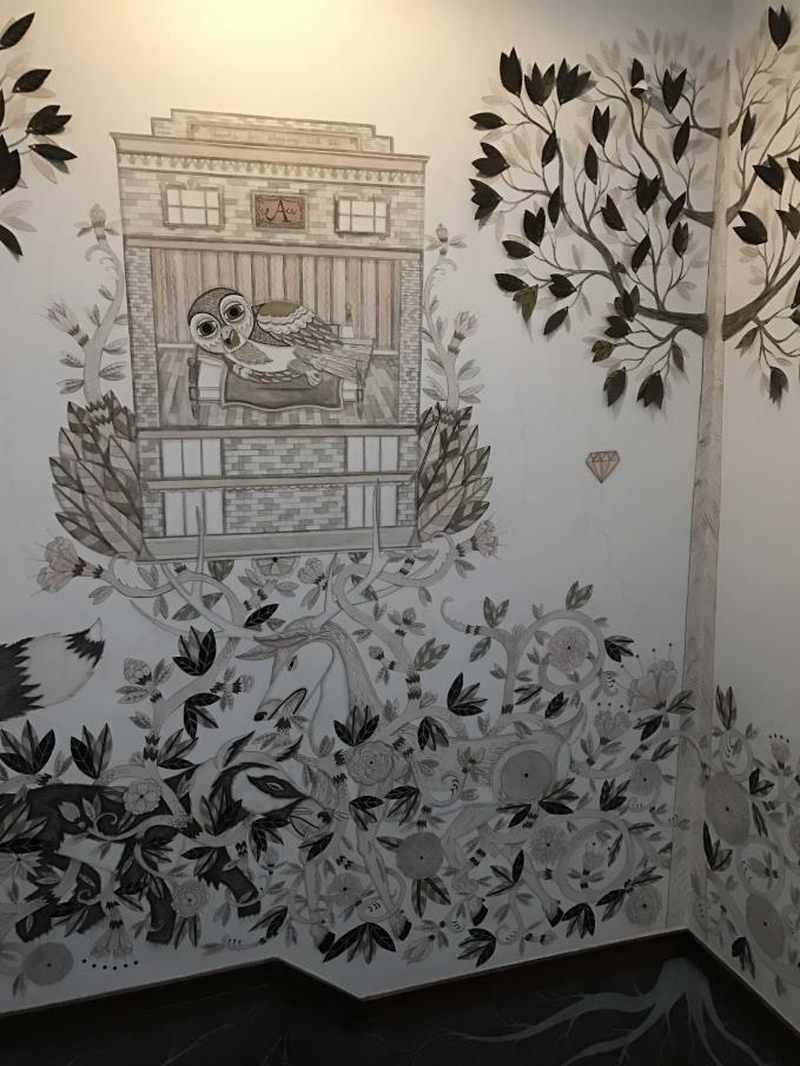 The city hosts some of the most inventive street art around. Some of it had rubbed off in my room at the Ace (above), adorned by a giant cat image guarding my personal vinyl deck.

Retro touches extended to a Heath Robinson-like steel shower in my standalone tub that I gave up on and recycled fabrics and furnishings I found charming if hardly luxurious. Public spaces downstairs also ooze cool; the attached Stumptown coffee house feels like a city hub.

It took a while to smell the coffee in this article, but Stumptown is the place to start. It took on the city’s nickname (from its logging past) and for nearly two decades this roastery has set the standard by which rivals are judged.

These are many to pick from nowadays. Take Extracto, a decade-old chain of two with its roastery at the original N.E. Killingsworth Street cafe/shop. From the Eleven of Spades house-blend through rare single-origin roasts to the elevation of latte decoration to an art form it hits all the right coffee buttons.

Street food ‘pods’ are similarly scattered around a city devised on a grid system (hence NE, NW etc attached to some impossibly long streets to signify which district you are in). 28 South East Place and Division Street hosts the Tidbit Food Farm and Garden, a lovely place to refuel, global food carts circling the Scout Beer shack like covered wagons.

I grabbed a picnic table, a Fresh Hop Simcoe brewed by the hyperactive beardies at Breakside and slurped the best bone stock rich ramen I’ve ever eaten from a truck called Hapa. The name signifies the fusion of Japanese cooking techniques and Hawaiian recipes. For a full list of Portland’s food cart locations visit this link.

For those who favour the indoors option when dining Portland is equally diverse, and as  you’d expect casual has vanquished formal in the cutting edge eateries. Le Pigeon on East Burnside Street, run by restless genius Gabe Rucker, still rules the roost, but I’d also heartily recommend Aviary on boutique and gallery lined N.E. Alberta Street.

It's a restaurant that packs culinary surprises, so chef Sarah Pliner’s signature dishes have had to work hard to make the cut. Charred octopus sounds simple and maybe overpriced for $23? Think again. This sumptuous cephalod pictured has a back story – brined for 12 hours, slow braised for a further six until tender, then flash-fried to sear its edges. It comes on top of some broccoli raab (or cime di rapa, a slightly bitter cousin of the turnip) in a red curry jus with a molten ricotta pudding on the side.

Such a dish demanded an accompaniment that crosses boundaries, too. Step forward Interplanetary Traveller, a gulpable red blend of Gamay, Dolcetto and Dolcetto from the Holden winery in Oregon’s premier wine region, the Willamette Valley, best known for some of the best Pinot Noirs outside Burgundy. The Willamette is inland Portland’s river and the vines stretch south of the city along it for 100 miles to equally laid-back Eugene.

Portland, a city so liberal and prepared to protest that President Bush Senior dubbed it “Little Beirut’ (indeed the only riots when Trump was elected were here) has halted metropolitan expansion into the vineyards and restricts high rise inside the city limits.

In truth the centre, focused on Pioneer Courthouse Square, is not glorious architecturally, but it’s a human cityscape to walk around with the free spirit shining most brightly in those reviving neighbourhoods, , once crime-ridden no go areas, now attractive, yet not overly gentrified. 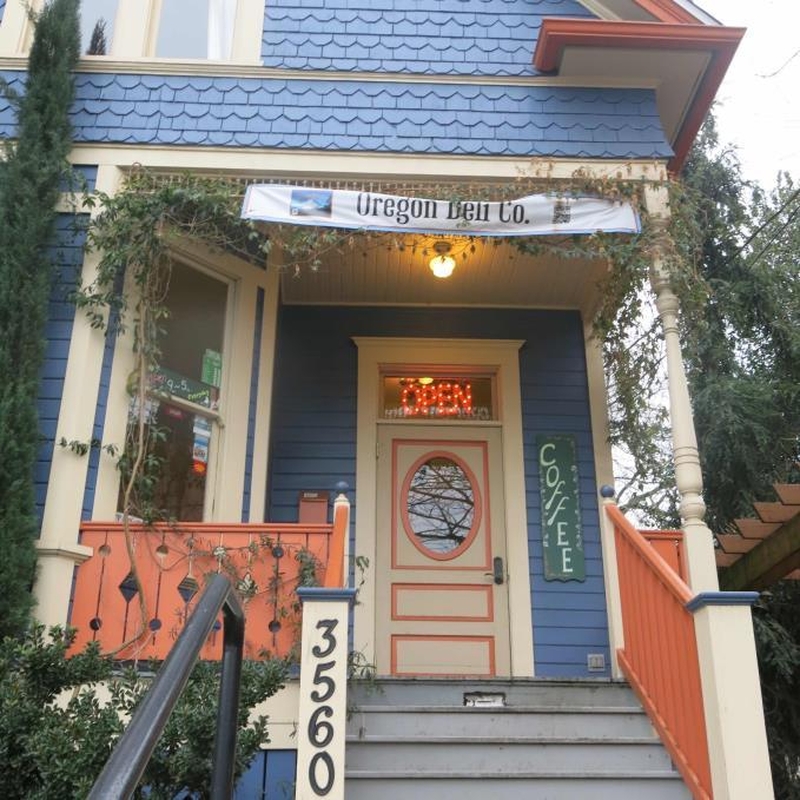 Check out especially the already mentioned North Mississippi Avenue (the pioneering Oregon Deli at 3560 makes a good base), and N.E. Alberta Street (Try the Radio Room retro bar at 1101, above).

For something different to enliven your stay in this most civilised of American cities in bewildering times check out these five fun options:

1 Small is beautiful at Leprechaun Park

Mill Ends Park – total area 452.16 sq in – holds the Guinness World Record for the world’s smallest park. Known as Leprechaun Park, it fills a circular concrete hole, once meant to be the base for a lamp-post on Naito Parkway. Back in the 1940s a local journalist, whose office overlooked it, decided to plant flowers there and it was officially recognised as a city park on St Patrick’s Day 1976. PS Don’t aim to spend a whole day there. Ditto with the salmon in the brickwork.

2 Or if you fancy a more expansive green escape

The formal Japanese Garden has now added an extra 3.4 acres to its original 5.5, featuring ornamental cherry trees, ponds and tea house. The revamped Cultural Village has an authentic style medieval castle wall, which was built with traditional hand tools under the watchful eye of a 15th-generation Japanese master stone mason. It’s a place of tranquil contemplation all year round but must be spectacular in blossom season.

So entwined is the city with the vines on its fringes that the idea of an urban winery doesn’t sound so wacky. That is until you go tasting at the heavy metal-friendly Teutonic Wines on S.E. 20th Avenue, run for by German wine fanatic Barnaby Tuttle, a fanatic for German wine and Black Sabbath. In under a decade they have planted grape varieties typical to the country’s Mosel region – Riesling, Pinot Gris, Pinot Blanc, Chasselas, Gewürztramer, Silvaner, Pinot Noir – and now produce 6,000 cases of mostly white a year. Settle down with a singular Gewurz and ask them to turn the tasting room sound system up to 11. Find out more about all the Portland Urban Wineries here. I’m particulary tickled by Hip Chicks Do Wine.

4 But there’s more to Portland music than heavy metal

“I’m feeling so bohemian like you” famously sang The Dandy Warhols, a homegrown outfit in a city that has long lured outside bands and troubadours to share its indie vibe. Legends such as the late Elliott Smith and Manchester’s Johnny Marr, who joined Modest Mouse, themselves long-time incomers here. My big two homegrown Portland bands de jour? The Shins (originally from New Mexico), who finally have a new album out called Heartworms, and true Portlanders The Decemberists. Drive down N.E. Alberta and there’s a street art tribute to their finest album, What a Terrible World, What A Beautiful World.

There are a myriad places to catch live music. Edgefield is the city’s big outdoor venue, while the Aladdin Theatre attracts big touring names, but best intimate stage with rootsy credentials is Mississippi Studios up on North Mississippi Avenue (there’s a theme developing here)

Look no further than one of America’s largest, offering used and new – Powell’s City of Books. On West Burnside Street around the corner from the Ace and boasting a spectacular wine and cookery section, I couldn’t resists its allure. After three Powell’s trips my Delta baggage allowance was in serious danger. Plus I spent my remaining dollars trying to recreate N.E. Alberta Street's best hipster look (below).

Neil Sowerby flew from Amsterdam to Portland with Delta after a connection from Manchester with partner airline KLM. From May 26, 2017 Delta Air Lines is running a seasonal service to Portland from London Heathrow.

Kieron Weidner was my guide for most of the Portland visit. His company First Nature Tours specialises in adventure and ecological tourism trips across the North West states. Highly recommended 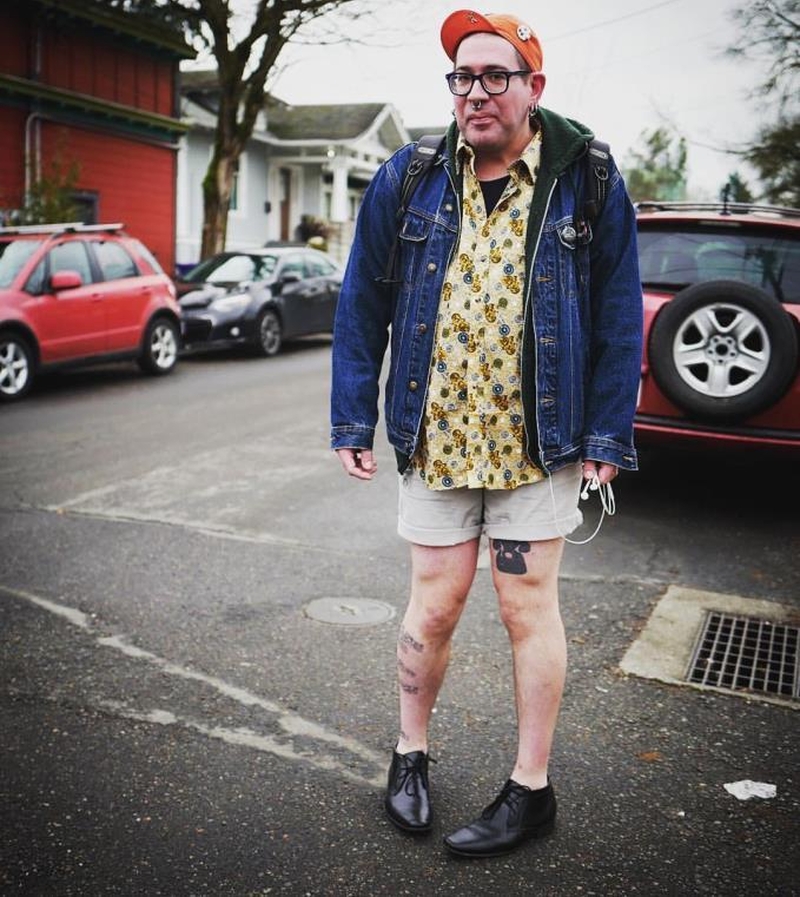 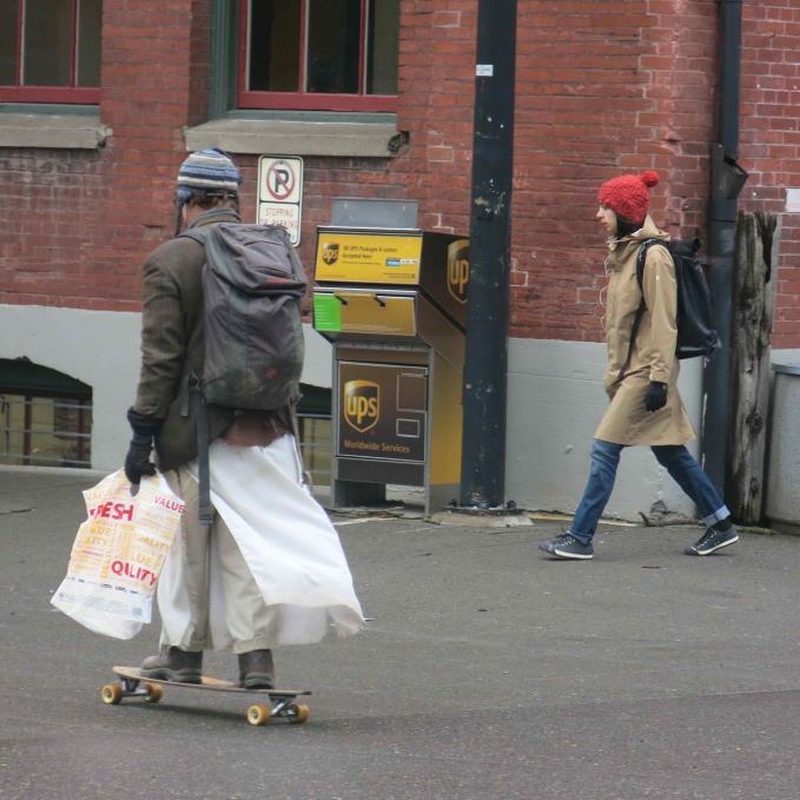 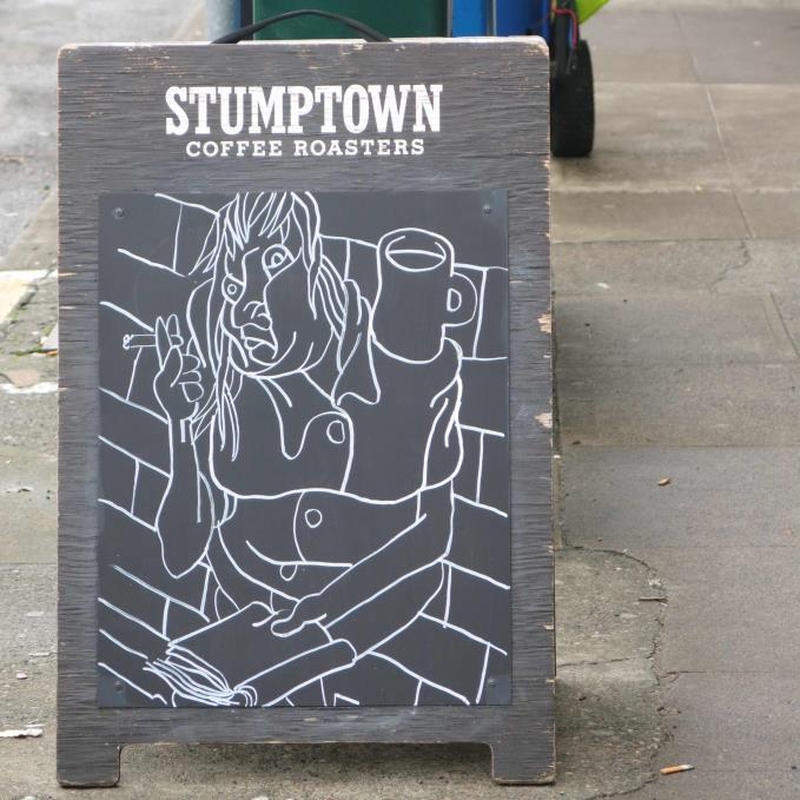 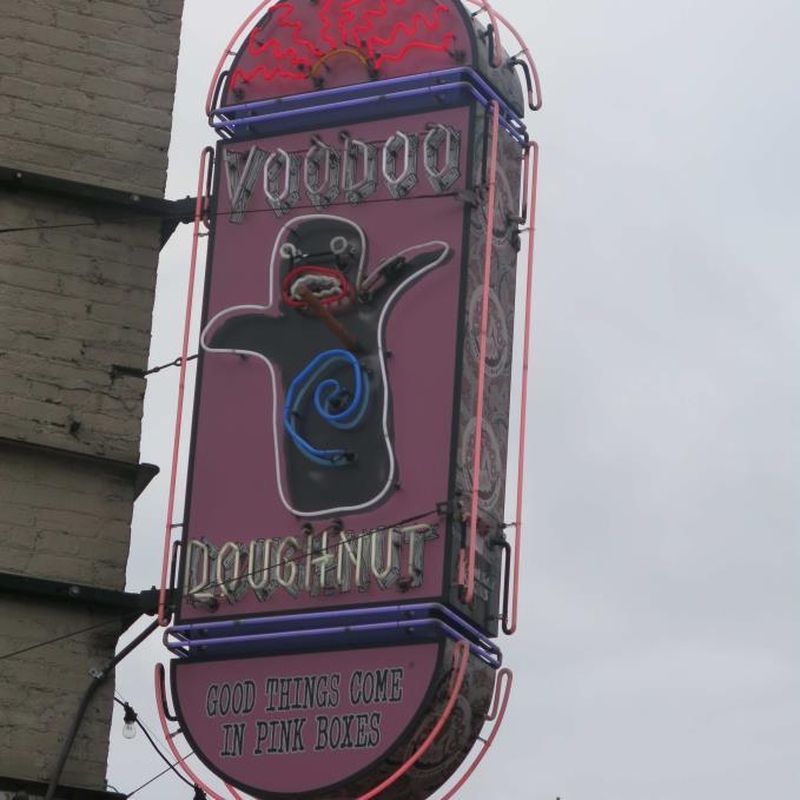 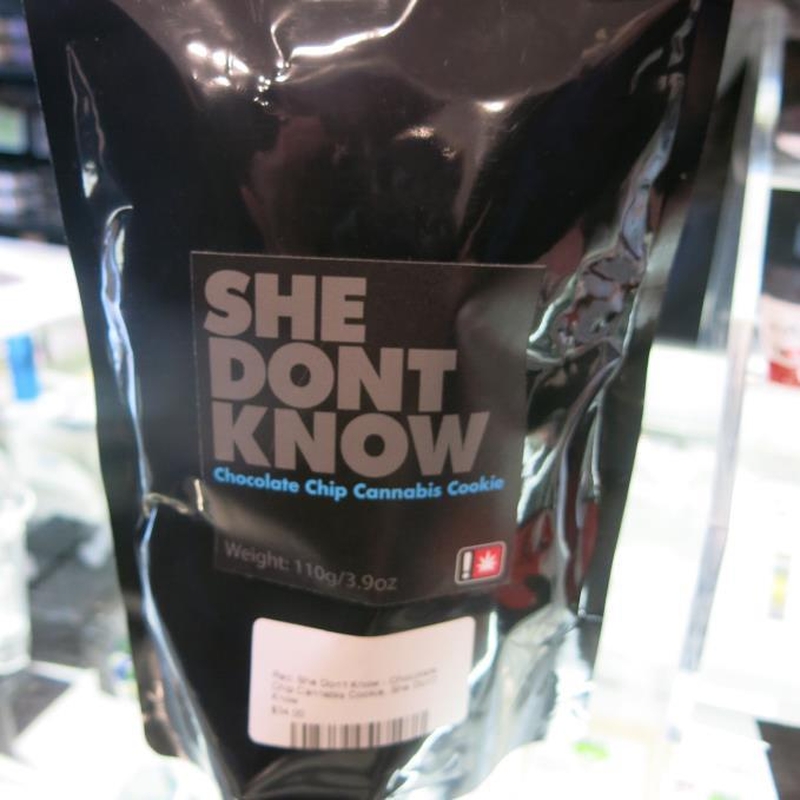 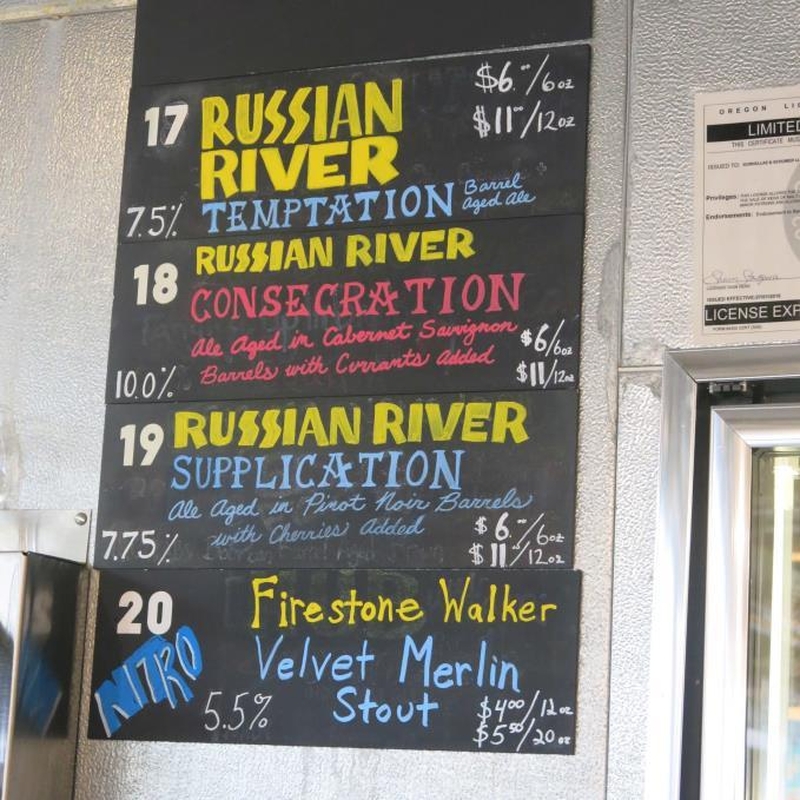 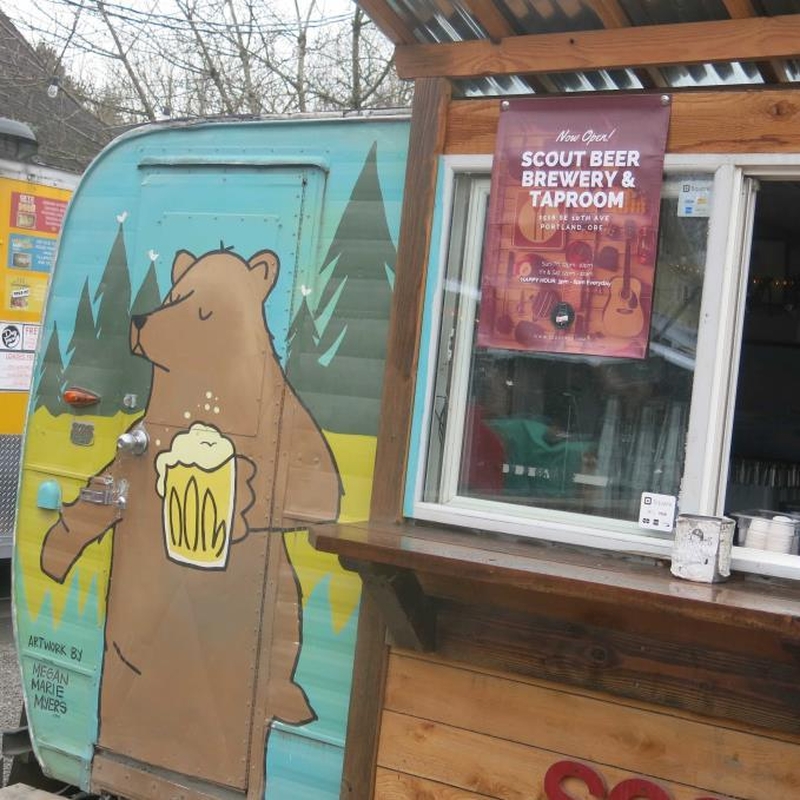 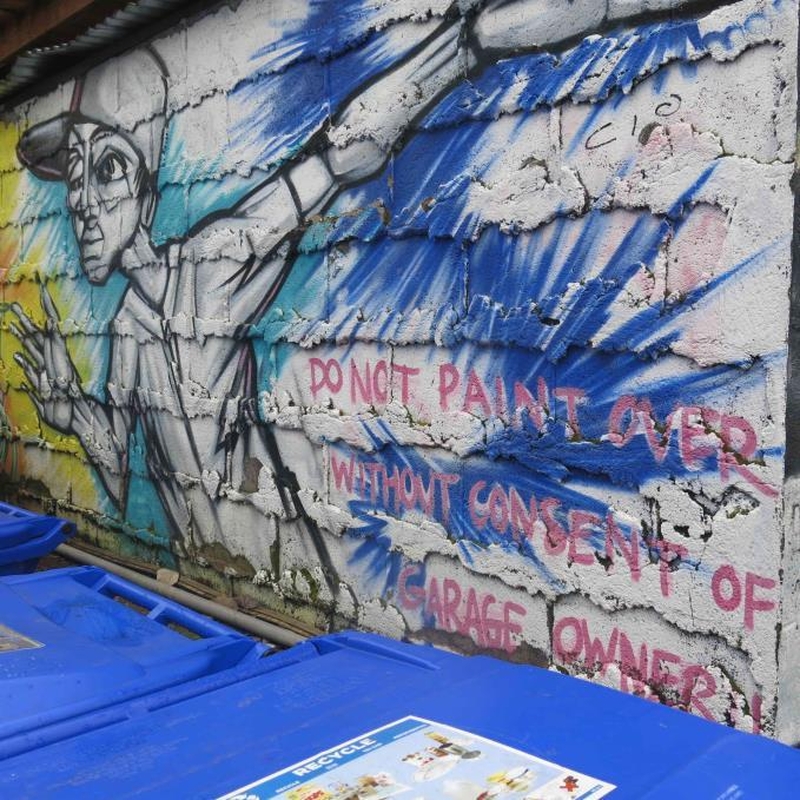