The Weavers Factory: the new Manchester gallery with a remarkable story

It’s often said we’ve lost the art of being neighbourly; we’ve become an isolated society, says the media, too preoccupied to concern ourselves with those living around us…unless, of course, they’re a fan of raucous late night parties or some other hellish behaviour. Then it’s war.

All of which makes The Weavers Factory story so refreshing. Opened last month, Uppermill’s new contemporary art gallery is the product of a very special friendship between Nigel Durkan, Julian Bovis and their neighbour Joan Charnley; who died at 88 in 2016 and bequeathed them her house. Her tentative wish? For it to be turned into an ‘art house.’

For artist Bovis and art therapist Durkan, it was a life-changing legacy and kickstarted a long renovation process to realise their beloved friend’s dream: not an easy job when the property in question was three-story and Grade II listed. Constructed in 1808, it was used as a domestic weaving factory until the industrial revolution, thereafter housing everything from coffin makers to temperance hotel and an illegal gambling den before Charnley called it home in 1963.

One of The Weavers Factory’s aims, undoubtedly, is to raise awareness of Charnley’s work. An award-winning textile designer, the Southport-born artist fought prejudice on several occasions; including as a textiles lecturer during the fifties and sixties, when her marriage status made her ineligible for the role of principal, and when Heal’s judged her designs ‘too advanced’ (in other words, ahead of their time) during the 1951 Festival of Britain. Fittingly, her Beachcomber design now hangs in the V&A, though Bovis and Durkan believe she still deserves more renown: “we want to make her famous.”

Perhaps the gallery owners’ biggest motivation, though, is their relationship with Charnley - who she described as ‘soul mates’ in her will and perhaps regarded as the sons she never had (she was married to Scottish artist Archie MacDonald from the early sixties until his death in 1991, but they never had children).

Bovis said: “When Nigel and I bought a house next door to Joan in 2012 we had no idea what an exciting journey all three of us would take. Joan wasn’t just a textile designer, she was an all round polymath. She was educated in an era when people still read books and, right up until the day she died, was inquisitive about everything. She never quite mastered the iPad but she knew Roget’s Thesaurus back to front. 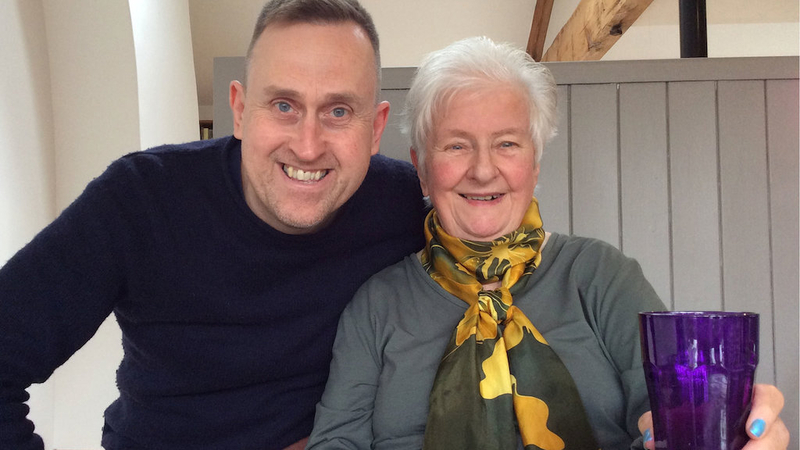 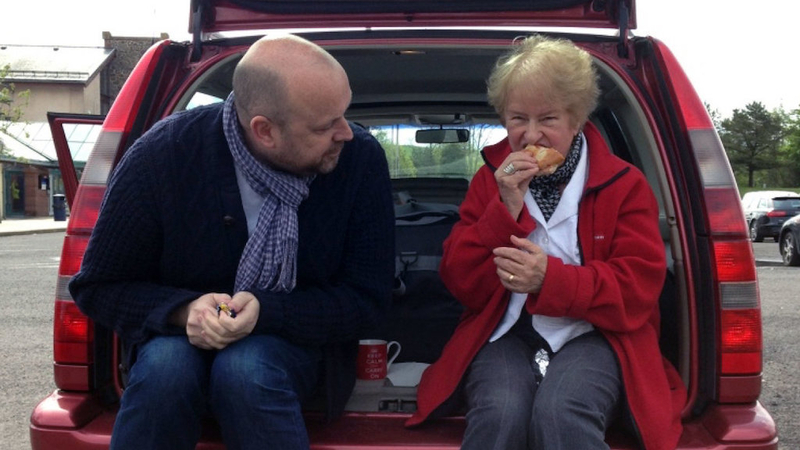 “Contrary to how it appeared we didn’t look after her, she looked after us. That five-foot-nothing, 88-year-old lady taught us six-foot 40-something men all about life. She made us brush up our act and raise our game - nothing was allowed to be sloppy or lackadaisical on Joan’s watch. As the years pass since Joan’s death, Nigel and I have begun to focus on the legacy she left, but nothing will ever be as important as the friendship we had and the love we shared.”

Clearly, Charnley was a lively character: hosting themed fancy dress dinners, taking a trip round the Galapagos at 80 and recalling whisky sessions with John Nash; one of several artists she and her husband were acquainted with, including L.S. Lowry. Asked to describe her by the Observer’s Kate Kellaway, Bovis and Durkan both alighted on ‘cheeky,’ with Durkan adding: “Her public persona was upstanding, proper, well-spoken - queen of etiquette - yet behind it all, she was raucous and subversive. She thought she was subtle but the faces she would pull! There was more than a touch of the thespian about her.” 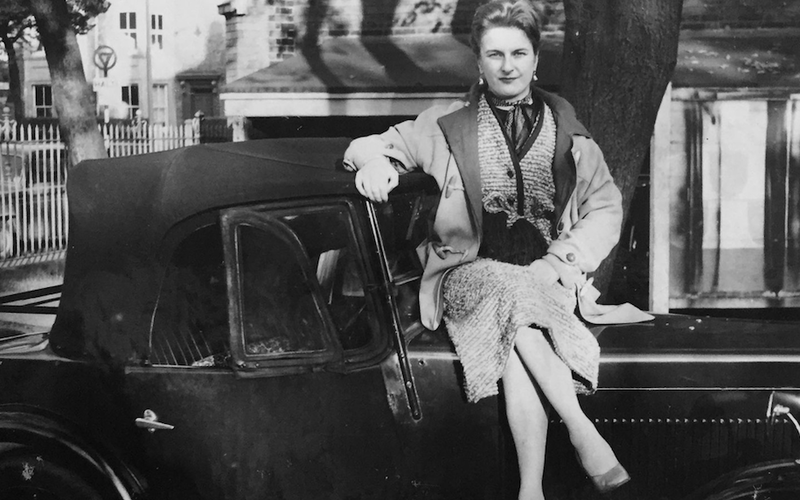 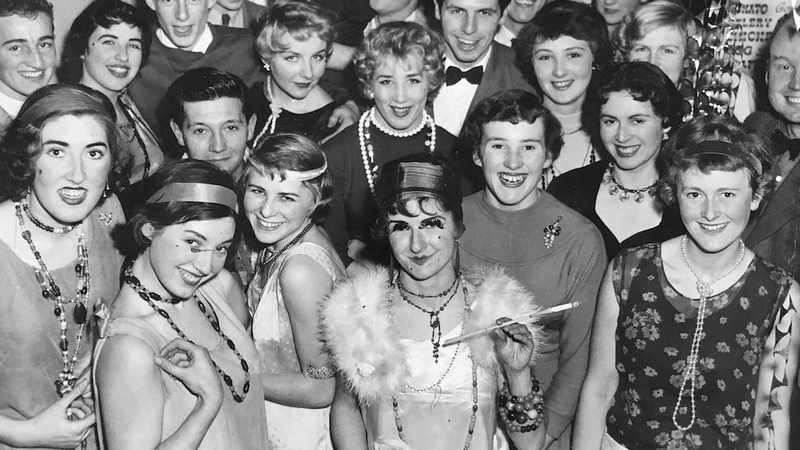 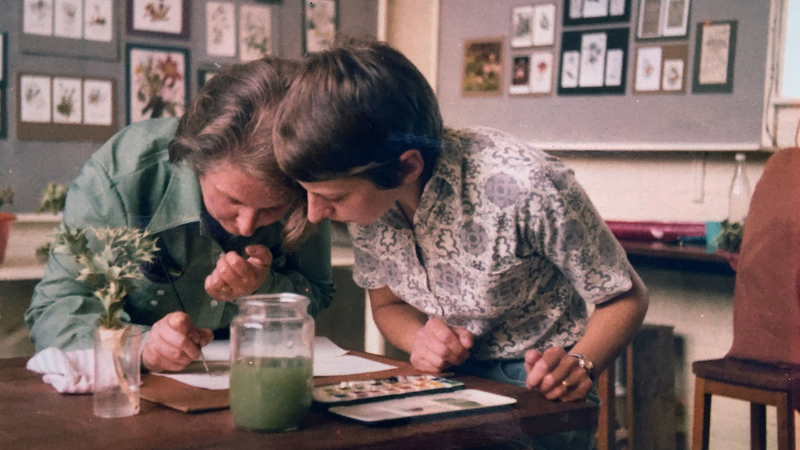 No doubt Charnley would be proud of what her ‘boys’ have achieved in The Weavers Factory: a stylish yet homely space that houses two galleries, gift shop, tea bar and garden inspired by her love of gardening and botany. Designed with the help of local Saddleworth historians, architects, designers, woodworkers, gardeners and craftspeople - not to mention Bovis’ fortunate architectural training - the building is a sensitive blend of historic and contemporary, with period features including an antique grocers’ counter and beams made from decommissioned Prussian ships.

As for the content, weekly creative workshops are held in Charnley’s former studio - everything from jewellery to fabric and floristry - and a new exhibition is launched on the first weekend of every month, mainly focusing on emerging young talent and older artists who have been somewhat neglected. Upcoming shows span 23-year-old furniture designers to octogenarian potters and Seamus Killick, first recipient of a new annual bursary that will reward ‘a young emerging artist whose work embodies (Charnley’s) creative and innovative spirit.’

One thing that unites all the artists shown? Durkan and Bovis must love their work. Like Charnley, both believe art should be democratic - based on talent, rather than imposed investment value - and, while there are plans for short films on each showcased artist, they’ll let the work ‘speak for itself.’ Furthering this democratic approach is a range of affordable art for sale, and limited edition exhibition prints.

Last but certainly not least is The Weavers Factory’s community ethos. Events include pop-up shops with Emmaus Mossley, a local homeless charity that sells and upcycles second-hand goods, while the Dobcross Quilt initiative will see 100 individual fabric squares designed by local makers and sewn together live at the gallery next month as part of Simon Buckley’s We Play In Time exhibition. The building is also available for room hire, ideal for local groups and happenings.

We know we’ll certainly be visiting shortly. What a special place indeed.

I’ve always felt that art galleries can be really intimidating places to visit. I’m an artist myself and I don’t like going into them.

When you walk into a gallery it’s often echoey and painted white, with a gallery assistant wearing a black polo neck jumper and reading an iPad. They smile at you thinly and look away, leaving you to wander around aimlessly not knowing what to do with the silence.

Sometimes I worry that, when Colin Jellicoe, died he took the spirit of the independent Manchester art scene with him. For every innovative gallery like Caustic Coastal or Paper, there’s a TK Maxx-style one with paintings of glittery cows. Or even worse, one of those awful blue chip-style galleries that are springing up everywhere, all black walls and salesmen in pin-striped suits droning on about which art you should invest in. It’s all so tawdry and soulless, isn’t it?

That whole ‘hard-sell’ nature of art galleries is repulsive to me, you can’t force someone to buy something they don’t like. Well, actually you can, and that’s how a lot of British galleries work. But what’s the point? What’s the point of forcing sales just so you can earn a bit of commission?

When we were deciding what the Weavers Factory gallery should be like, we travelled across the country visiting all types of galleries - from small independents to large municipals - and there was one common thread; they all made you feel like you didn’t belong there.

That’s how we came up with the idea of making our gallery a friendly and open place where you can see all types of amazing art but you’re not forced to buy anything.

I don’t know, maybe it’s my age. Maybe when I was younger I’d have thought it was acceptable to sell art like you would a car, a flat or a pension fund. Now I just think people should come to a gallery, have a sit down and a nice cup of tea. If they buy something, that’s great. And if they don’t, that’s fine too.

I also think galleries should sell more affordable art. Not ‘affordable art’ as in borrowing money to buy art (which ethically I have problems with) but affordable as in ‘that’s nice, I wonder if they do a cheaper version’ art. In all of our exhibitions we sell limited-edition prints of the work, and exhibition posters for a tenner too. One gallery owner told us selling ‘cheaper’ art would never work because it undervalues the original artwork - but therein lies the real problem with the art scene. If all you care about is the rising stock value of customer’s purchases then you’ve lost all artistic integrity.

There are bound to be artists who wouldn’t touch us with a barge pole because we break standard gallery rules but all that does is weeds out ambitious and ruthless artists, and that’s not a bad thing. We’ve learnt to only show artists whose work we love and whose ethics we agree with. Life is too short for big egos and big profits.