'We wanted a proper house, in the centre, with space for the kids' - why wealthy buyers are snapping up Manchester's city centre townhouses

WHEN Calum McGowan acquired his rundown 200-year-old weaver’s cottage on Liverpool Road he knew he had a lot of work ahead of him. The building was in a very decayed state, but that wasn’t going to let him do anything other than dream big.

So he sat down with a piece of paper and started writing down his thoughts. Thought one was: ‘I want this house to change my life’. So he got in Maurice Shapero, one of the north’s most original architects, to design a space that will be an exciting mix of the very old and the totally modern.

“This house will be for me, by me,” says McGowan. “I realise though I will be just part of the story of the building, a custodian for twenty or thirty years and then I’ll hand it on.” Later he sends me his document of twelve principles ‘cooked up of an evening with lashings of gin’. It’s a beast of a thing twenty pages long with thousands of words. Good words.

Of all the results of the central Manchester building boom, the return of the house is perhaps the most unexpected

McGowan clearly likes his gin. He isn’t alone in that nor is he alone in bringing domesticity to a city centre building. There’s a new and very welcome element to what he is doing that is being repeated elsewhere. Houses are being brought back to life after decades, or even centuries, of use as commercial premises.

These are different from the usual conversions, which tend to insert flats into old warehouses, banks or mills. Across the city centre in pockets there are scores of proper townhouses that have been spun into other uses but still survive. The Northern Quarter is particularly rich, Lever Street being an example with several old townhouses.

An obvious candidate for domestic conversions is St John Street, with houses from the late eighteenth and early nineteenth centuries. These present very handsome terraces on both sides of the street and were built for well-to-do Mancunians. Over time they all morphed into doctors’ surgeries or legal chambers. This seemed logical given how the rich had moved out of the centre into the suburbs.

Now as the city centre continues with its building boom (11,000 extra apartments and counting) these properties have become valuable as residential buildings once more. It’s a happy instance of a wheel coming full circle.

Last year I talked to Sandra Soriano, the boss of Tast restaurant on King Street and the wife of Manchester City CEO Ferran Soriano, about the transition from life in Barcelona to that in Manchester. She lives in a re-conversion on St John Street. “I love Manchester,” she said, “but I wanted a place in the city centre rather than out in the suburbs as so often happens here. It’s as we lived in Barcelona. I wanted all the central amenities, but I also wanted a proper house. We have kids too so I wanted space, in other words a house and St John Street was ideal.”

Meanwhile Gary Neville is presently converting a pair of St John Street houses (which were occupied by squatters in the summer last year). He told me, during the St Michael’s planning process, the logic behind his approach. “Manchester city centre needs really high specification properties, really top of the range accommodation as it progresses. There is room in the market for all different types of residences but where we miss out is in providing that level of housing. If people are moving to Manchester and they want a top international standard house or apartment then they will struggle in the city centre, and that needs to be put right.”

Properties, pre-conversion on St John Street, have sold for £500,000 to £750,000 so the level of investment needed to produce that high quality living can be gauged. Still given the trend it’s not beyond the realms of reason that within ten years all the properties will be once more houses.

The same goes for the weaver’s cottages on Liverpool Road with, aside from McGowan’s future residence, three more are presently being converted. Carolyn Mellor, from estate agents Homes 4 U, says: “Variety is definitely an asset for the city centre. There are more small families that want houses as opposed to flats in the central areas. You can see that with some of the new build schemes too,  with maybe, garages underneath and gardens on roofs. By the very fact that houses are still unusual in the central areas makes them a valuable investment and thus encourages conversion back to what they once were.” 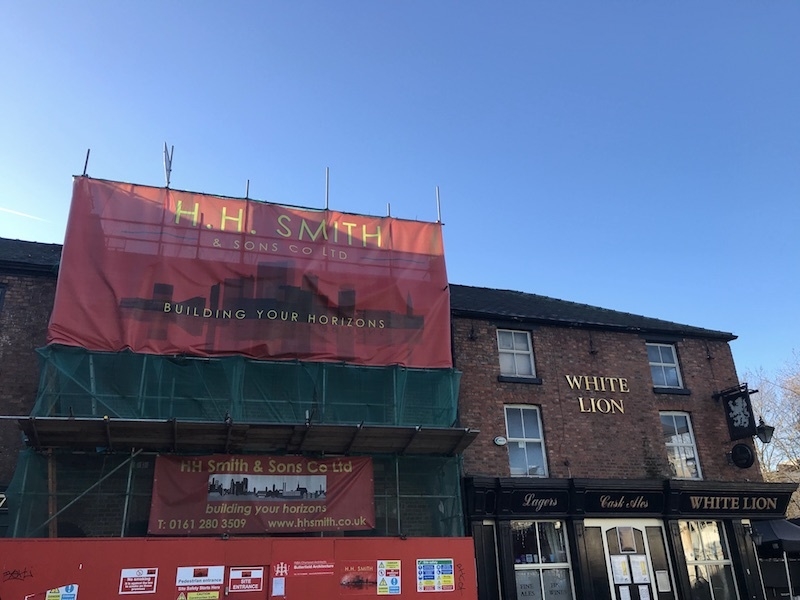 Calum McGowan again: “I really do want this house to change my life. I want it to start to knit together my love of Manchester, of industry, of commerce, of design and architecture, of doing things differently. To push boundaries. To make my architect take a step back. To be potentially award-winning. Not to show off, but to show that I want to do an incredible job, to an incredible standard. Clever spaces, finishes, twists, turns, absolute delighters.”

It’s unlikely that many conversion jobs back to homes will have owners as lyrical as McGowan. Yet his enthusiasm for his historic property is ample reminder of the charm the genuinely antique possesses. Of all the results of the central Manchester building boom the return of the house is perhaps the most unexpected and definitely the most welcome.