The Hinchliffe Arms is a 150-year-old pub set in a place where it would be easy to become a writer of fairy tales. Cragg Vale is truly a place of magic. About 40 minutes from the city centres of Leeds and Manchester, with a railway station at Mytholmroyd. Yes, Mytholmroyd. It's about a five quid taxi from there.

Ruairidh has had me thinking of those prunes ever since

Or you can drive from Littleborough across the top of a desolate moor of Blackstone Edge and suddenly descend into a huge slash in the land, continuing below the tree line into a lush green place that feels like it is a scene from one of those fairy tales you're about to write.

Trees whisper to you here. They are concerned about you, they truly are. They want you to be happy.

The appearance of the pub keeps the theme going, looking like the house of an octogenarian magician, who wears heavy embroidered dressing gowns and nightcaps.

It was taken on by the force of nature who is Esther Maylor in the summer of 2022. Mancs will know of her as the landlady of one of the coolest pubs in the city, The Eagle in Salford, another one-off pub that serves this writer’s favourite pint, Trailblazer Stout.

Shortly after taking over, Esther and Mr Rigsby, her border collie, met a chef. Ruairidh Summers came up north from The Smoke during the pandemic and stayed. He was the sous chef at one of the most celebrated restaurants in the world where he worked under Fergus Henderson, the GOD of nose-to-tail eating. That’s the St John Restaurant that you, dear reader, can learn more about in my original review from 13 years ago.

When Esther told me that she had talked Ruairidh into taking the kitchen on, I jumped in the car. Fifty minutes later, on a sunny summer's day, I was sat outside the pub being jostled by good-natured ramblers, dogs and locals; tucking into some world-class bar food which I described as one of my best dishes a few months ago.

I’ve been back twice to eat Ruairidh’s evolving food and, on both occasions, thoroughly enjoyed myself.

Grilled flatbread with burnt onion butter (£4) is a pillowy delight. It's buttery (obviously), toasted and near-burnt. I could make a whole meal of it, maybe with a chunk of Wensleydale cheese and come away happy. Certainly, the glass of Hutton Ridge Pinotage helped it along the way, a thoroughly classy drop of pub red.

Battered cod cheeks (£9) are beauties. Crunchy again just on the right side of fragile. A beer batter from heaven with a fat nugget of cod steamed just so. The tartare sauce, freshly made and packed full of capers completes a great starter.

Jerusalem artichoke with leeks, Wensleydale and pear (£10) is too mushy for me. While each component stands to attention with big flavour, it needs some background. The artichokes are, I think, supposed to be crispy on the outside. Also, a little extra acidity wouldn’t go amiss. As the landlady wafted past me, she suggested pickled walnuts. Good call as it happens.

Brussels sprout Caesar (£10) does Fergus’s training proud. Roast and raw with lashings of dressing and shot through with toasted chunks of sourdough. This certainly has the balance right.

Grilled turbot, parsnip and burnt citrus butter (£21) is an on-the-bone cross-cut chunk of the king of the sea. Fresh, meaty, and cooked to the point of just firm. Topped with parsnip crisps and roasted chunks. The sauce is a bit under-seasoned for me, maybe a little more ‘beurre monté’ would silk it up, along with a touch more citrus.

Galloway strip loin, purple sprouting broccoli, shallot and mustard (£22) is a cracker. I would love the broccoli on the side of the plate though. Then I could smear the beautifully cooked - to the point of melting - shallots and mustard across the steak like roasted garlic or marrow. Double banging lush.

This took me back years to steak and onions cooked on two gas rings in the back of one of my grandad’s butchers' shops in Levenshulme. My favourite lunch. No fancy sandwich shops around in those days.

Welsh rarebit (£6) quite simply blew me away. I’m more than sure I’ve made this from the St John cookbook, though these things are always better when somebody else is making them.

Finally set cream with Earl Grey, prune and shortbread (£7) is perfect. It’s everything you want off a laden table of banqueting fare at Wuthering Heights. Ruairidh has had me thinking of those prunes ever since.

During this meal, people have been throwing logs onto the fire next to me, two girls have run over to ask Esther to grade their crayon drawings, I’ve had a chat with a couple of my readers from Manchester who happen to be on the next table and three different dogs have looked me over to see if I’m mug enough to share some food. I’m not.

The service here is funny, gracious, and knowledgeable whilst the atmosphere is such that if I asked it, it would remove the knots in my shoulders.

I’m sorry, I love this place. 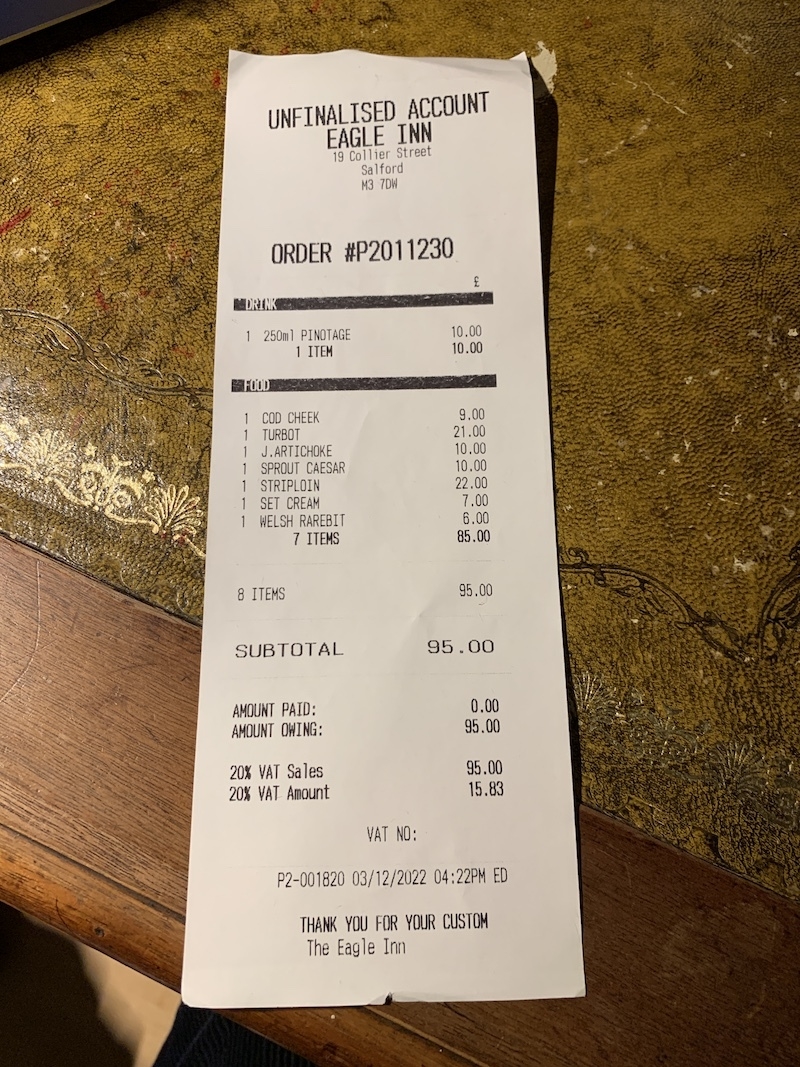