IT'S PROBABLY Britain's best terracotta and faience showcase. Manchester's Whitworth Street in the fifteen years from its inception in 1891 became a burnished boulevard of flamboyant detail, civic self-love and imperial bombast.

This week the Palace Hotel's main hall is opening to the public as a glistening faience festival of food and drink. If anywhere embodies the tilers' skill then this place does.

There are trillium flowers grouped into triangles on sweetly slender pillars in an effortlessly light internal loggia. There are squared columns with complex floral patterns and doors with clocks surmounted by shining butterscotch castles.

In the old main entrance at the corner of Whitworth Street and Oxford Road scallop shells are set over sugar stick arches with clever patterns of R entwined with A nearby. The letters are the initials of the business which built the structure between 1891-95, the Refuge Assurance Company.

The effect of all the tile shine is that you walk in and you smile.

But hold on, what do I mean by terracotta and faience?

These are ceramic materials that are respectively unglazed and glazed. And just as importantly, when they are cast they are dense, so smoke and soot finds it harder to penetrate into the pores of the tile. These terracotta buildings are, with care, self-cleaning. Even after thirty years of abuse and neglect by Britannia Hotels Group, London Road Fire Station shows off its ornate sculptures with pride and distinction. Once cleaned these works gleam. The material can also be moulded to provide great variety.

It was in 1887 that the Improvement Committee resolved to link and widen two small streets, Pump Street and Hunt Street, and thus connect Oxford Road and London Road and their two important stations. Sir Joseph Whitworth had gifted land in the centre of the proposed link to this effect, hence when the whole length was completed it gained his name. Whitworth has been called the 'father of precision engineering', but he was also a philanthropist and bequests after his death provided, amongst many projects, for Whitworth Art Gallery.

The Refuge Assurance company was the first to take advantage of land that was released and by 1894 had opened a large office premises which is now part of the Palace Hotel. Alfred Waterhouse (Manchester Town Hall, the University of Manchester etc.) designed the building. Waterhouse had been a pioneer in the use of terracotta, not least in the interiors of Manchester Town Hall twenty years earlier. Now in his sixties he was perhaps using terracotta too much, especially the hot red tile he used in his Prudential insurance buildings around the country for which he gained the nickname 'Slaughterhouse Waterhouse'.

The Boardroom of the former Refuge 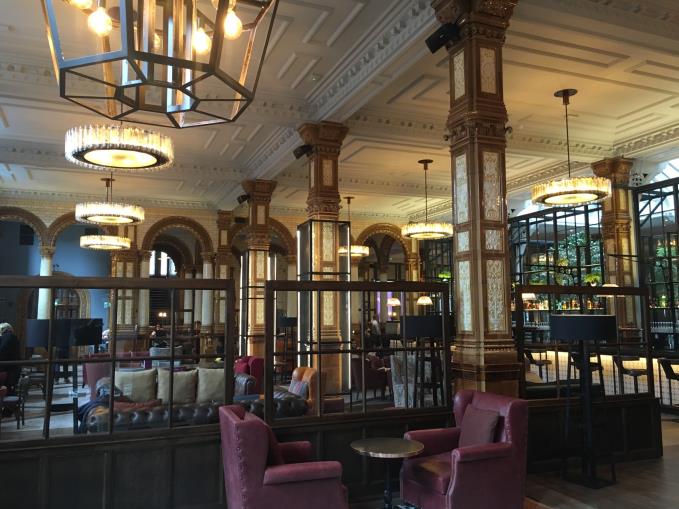 The Refuge and its columns

For the Refuge he was much more considered than for the Prudential, and his sixteenth century Northern Italian style in brick and dark red Doulton terracotta on the exterior is spectacular but dignified. Between 1910-12 the building was extended south to the railway by Waterhouse's son, Paul, in a similar style but with the addition of a 220ft tower. Perhaps the most memorable description of the buildings facing Oxford Road was that of CR Reilly who, in 1924, thought it resembled ‘a tall young man in flannel trousers escorting two charming but delicate old ladies in lace’.

The building was extended along Whitworth Street once more in 1932 by Stanley Birkett. Paul Waterhouse, after completing his part of the building, declared that as with his father's original structure, the Refuge would need 'no repair just sponge-work'.

In 1906, at the eastern end of Whitworth Street, London Road Fire Station opened. Burmantofts butterscotch tile was used by architects Woodhouse, Willoughby & Langham. They employed sculptor JJ Millson to provide the detail and he couldn't believe his luck, delivering thirty large treatments cast in terracotta ranging from enjoyable ensembles of fire and water spirits over the main gate, and allegorical female figures on the two smaller towers with embodiments of Arts, Science, Truth and Justice lower down.

On the Fairfield Street/London Road corner are two enjoyable females, one with eyes closed and a pet owl and one stretching with a pet cockerel. These are Night and Day representing the fact the Fire Station provided round-the-clock protection for the city. A walk around the building perusing the works is recommended. Or perhaps buy wine and sit in Carluccio's in Piccadilly Station and study the sculpture at eye-level. 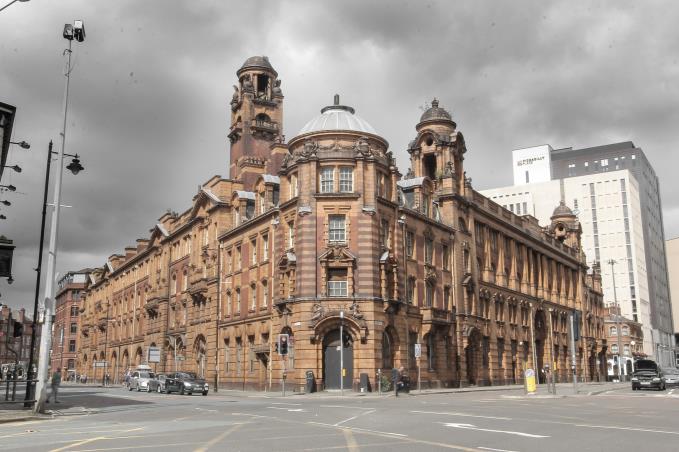 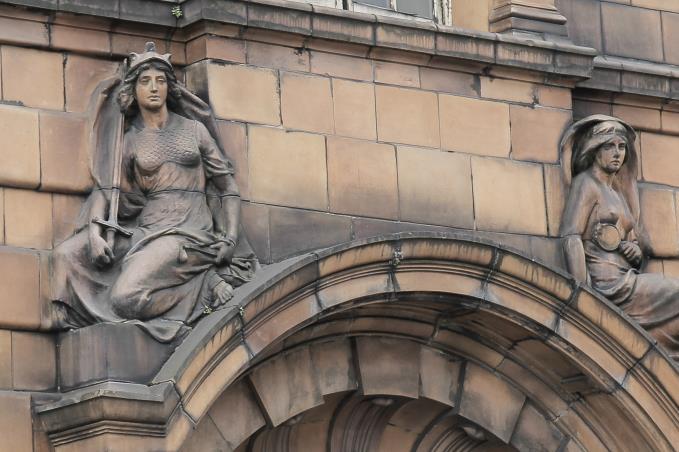 Other terracotta delights along Whitworth Street include the old Central School, now Manchester College, from 1900 by Potts and Pickup, and the vast warehouses of Lancaster House, India House and Bridgewater House from between 1905 and 1912, all designed by Harry S Fairhurst. The latter three form an unparalleled canyon of commercial architecture and were part of a building boom following the opening of the Manchester Ship Canal in 1894. The first two feature vivid orange tilework and are again covered in extravagant detail. Bridgewater House is different, featuring white faience over granite.

Ships appear all over these buildings representing the ship on Manchester's coat of arms. The city is unique among British inland towns in bearing such a ship, but this was simply a recognition of Manchester's global commerce. Two gorgeous ships, one medieval in style and one nineteenth century, appear in stone over the Lancaster House entrance, they are repeated again and again on London Road Fire Station. 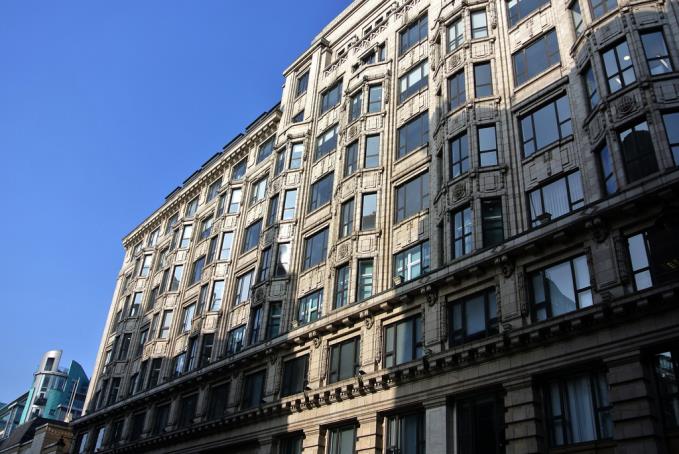 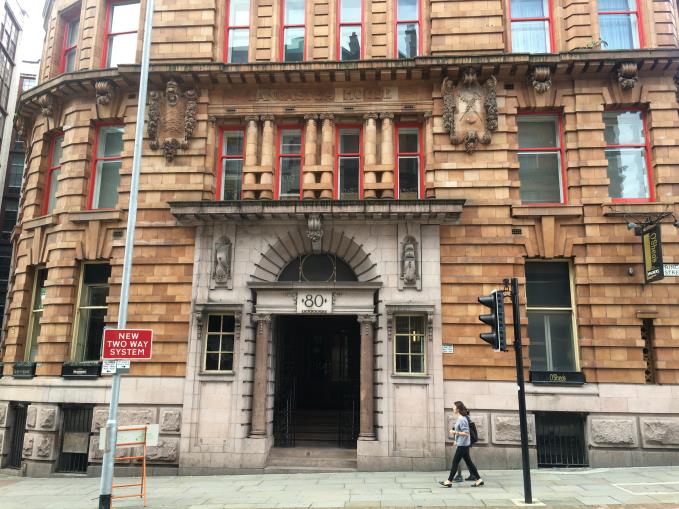 But the final terracotta wonder is from 1895-1902 by Spalding and Cross and is quite the equal of the Palace Hotel or London Road Fire Station. This is the former Technical School, now part of the University of Manchester. The radiant window at the entrance (on Sackville Street) includes a glorious ship inspired by the coat of arms in gorgeous technicolour. The whole arrangement in the foyer of glistening faience is impressive and, yes, open to the public - just push open the doors with their lovely brass Art Nouveau handles.

Behind the foyer is a stately lower hall with terracotta piers that's the equal - when taken together with the vaulted upper hall - of anything in the Palace Hotel. Meanwhile outside, superb, if occasionally grotesque terracotta heads of scholars and mythical monsters populate the Loire style facades. Up on the roof over Whitworth Street is the Godlee observatory in a copper coat with a dome made of sealed papier mache to ensure it is light enough to be turned to the desired point in the heavens. Visit the latter if you have chance via this website.

The opening of the Refuge at the Palace is a reminder of the civic and commercial ambition of the city just over a century ago. The mighty terracotta towers along Whitworth Street hold up a mirror to the city of the twenty-first century and ask us whether we can match that civic and commercial ambition. Go down to the Palace Hotel soon and rub your hand across those tactile tile surfaces and catch an echo of it yourself. 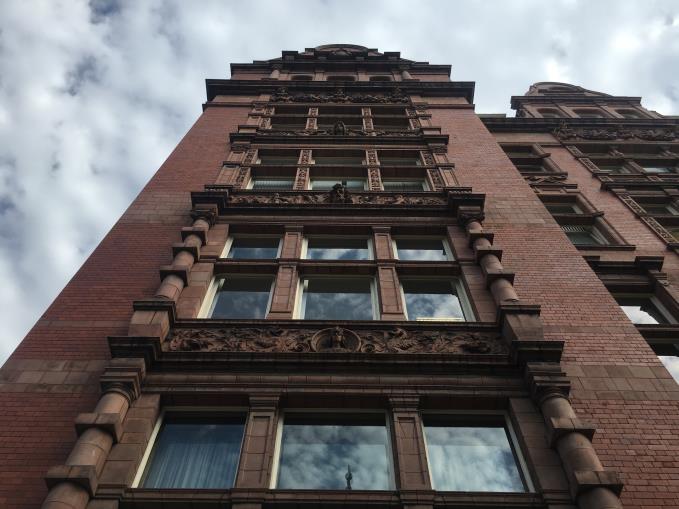 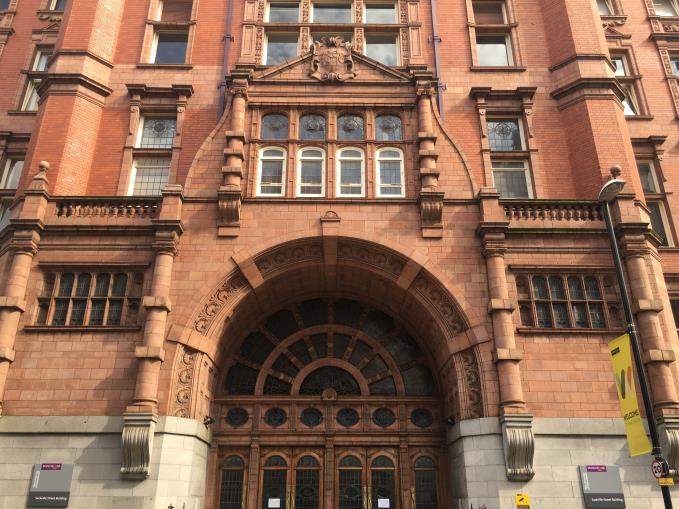 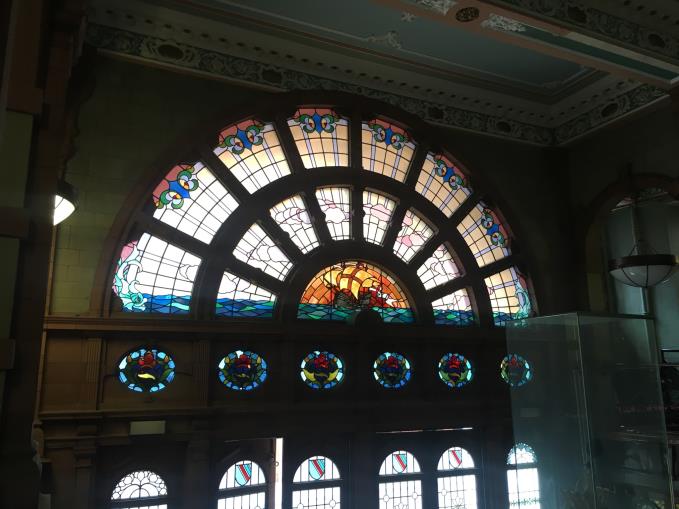 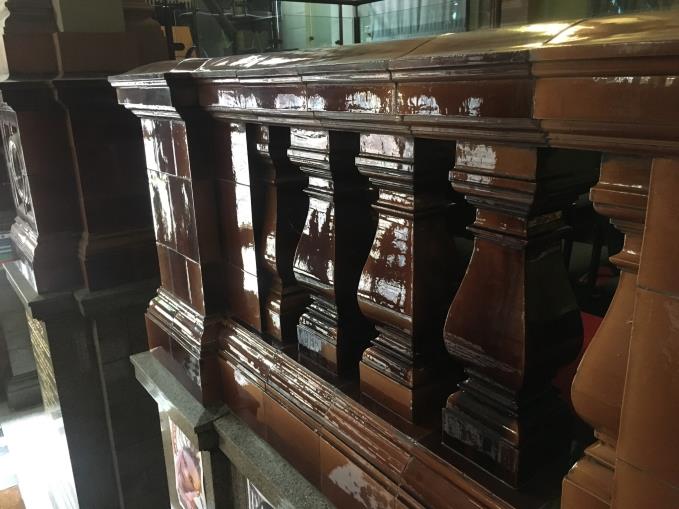