Gordo doesn’t want to jinx it, but this might finally be the one to bring a M-star to Manchester

Did you know there’s a restaurant in Manchester owned by a pal of Ferrán Adriá, chef at famed Catalonian restaurant, El Bulli - considered unequivocally to be the best in the world? Ferrán has hung up his aprons for now, but his pal, chef Paco Peréz, is holding the torch for impeccable Catalonian cuisine, with no less than five Michelin stars to his name. He is a quite remarkable cook.

A little over a year ago he opened Tast on King Street with some pretty formidable Catalonian business partners. Recently, they opened a second restaurant on the top floor -Tast Enxaneta (pron.‘anshanetta’.)

The whole prawn dusted with magic and fried. It’ll bring out whimpers when you take a bite

Gordo can still remember, hungry as an empty bucket at 2am outside a rural ‘disco’ fifty miles north of Barcelona, buying a slice of rough country bread, toasted on a brazier, rubbed with garlic, smeared liberally with an over-ripe tomato, then sprinkled with rough sea salt. No tomato has ever been as good since.

Catalonia is blessed with star ingredients from mountains, plains and pristine sea. The weather is clement and the soil productive. Chef Perez specialises in cuisine from this region and is pleased that many reliable critics describe his cuisine as ‘el Bulliesque.’

Interestingly, young Paco did a placement with Gordo’s hero, Michel Guerard in South West France. One of the ‘famous five’ three-star French chefs who pioneered nouvelle cuisine back in the seventies and eighties, Guerard was a great teacher and passed on a trick or two. Faultless béchamel being one of them.

Miquel Villacrosa is Paco’s Head Chef at Tast, which he owns alongside fellow Catalunyans Pep Guardiola, Txiki Begeristain, Ferran and Sandra Soriano; these guys have succeeded in steering Manchester City to an unprecedented domestic treble.  Although as Pep pointed out, after being asked what it means to be the first team to win the treble, he replied “well, actually, the women did it before the men”.

Enxaneta is a very serious play. And diners need to be seriously interested in their food to join in.

Tast has had a refurb; Mancunians didn’t like the minimal approach to décor.

Modern Catala has firmly turned its back on dark oak and even darker wines, but the super light, near-canteen style didn’t fit too well with the local market here.

The owners aren’t frightened about recognising what needs to change; running football clubs has taught them to respond to stuff that doesn’t appear to be working. The Tast menu has also seen changes, with a number of new dishes based on Catalonian ‘grandma’ cooking. Enxaneta, with only sixteen covers on the second floor, is open just four nights a week and delivers either a ten or fifteen course set menu. Separate from the menu on the lower floors.

The wine list has taken a swipe out of the 100 best Catalan wines, with a handful of interesting ‘other world’ wines. The wine flight is arguably the best option, Sommelier Filippo understands wine pairing at this level. Gordo forgives him for an ‘orange’ that he serves with a straight face. It could double up as a stove cleaner.

Paco’s two tasting menus marry ingredients, techniques and flavours to deliver what he is very good at. Flavour to the point where you think, for example, having eaten the Pesol Purs (pure peas) that you’ve never really tasted a real pea before. It’s an extraordinary dish that’s mind-bogglingly perfect.

The first three ‘amuse buche’ include a warm consomé d’ivern (winter consommé) in a Marie Antoinette champagne glass. It’s topped with foam, with dustings of dried truffle. It starts off like that first sip of Bovril at the swimming baths aged 8, but keeps going. Liquid beefy mushroom flavours lifted even more by star anise giving it a last-minute shove, like that rocket in the fireworks display that is out by three seconds.

Bunyol di Caça (squab pigeon) is a savoury bon-bon, but don’t bite into it until it’s completely in your mouth. It’s wonderfully weird. Liquid squab pigeon pâté. Your eyes will widen.

I won't walk you through the ten courses. They change and it would be too much.

But take the cannelloni stuffed with essence of langoustine. The head presented with a super soft, brilliantly seasoned tartare of the tail meat topped with a generous portion of caviar, whilst the béchamel sauce, draped over the whole, carries the flavour of the main event for minutes.

Paco has had one of his star dishes reproduced faithfully by his team. It’s one of those flavour bomb red prawns. The shell, having had the meat removed, is put to one side, the juices from the head mixed into a ceviche of the tail, and piped back into the carcass, the whole dusted with magic and fried like soft shell crab. It’ll bring out whimpers when you take a bite.

Wagyu En Dos Serveis (wagyu beef in two steps) arrives firstly as an egg-shaped dollop of tartar. Secondly, grilled (I think) with a light touch and a heavy lift with exotic seasoning and herbs, lying against a small mound of root vegetable purée guarded by small cubes of just soft squash.

This whole meal was a mind bender. It’s a fresh experience and very different to your usual English potential Michelin-star grub; it’s faithful to the Catalonian taste. I take my pal Hayley who has been bothering Rene Redzepi at Noma this spring, as well as the Roca Brothers at El Cellar. A week before, with our wandering Editor at large, Jonathan Schofield. Both were there to make sure I wasn’t dreaming.

It’s my tip for an M star this October. But let’s not spook it… 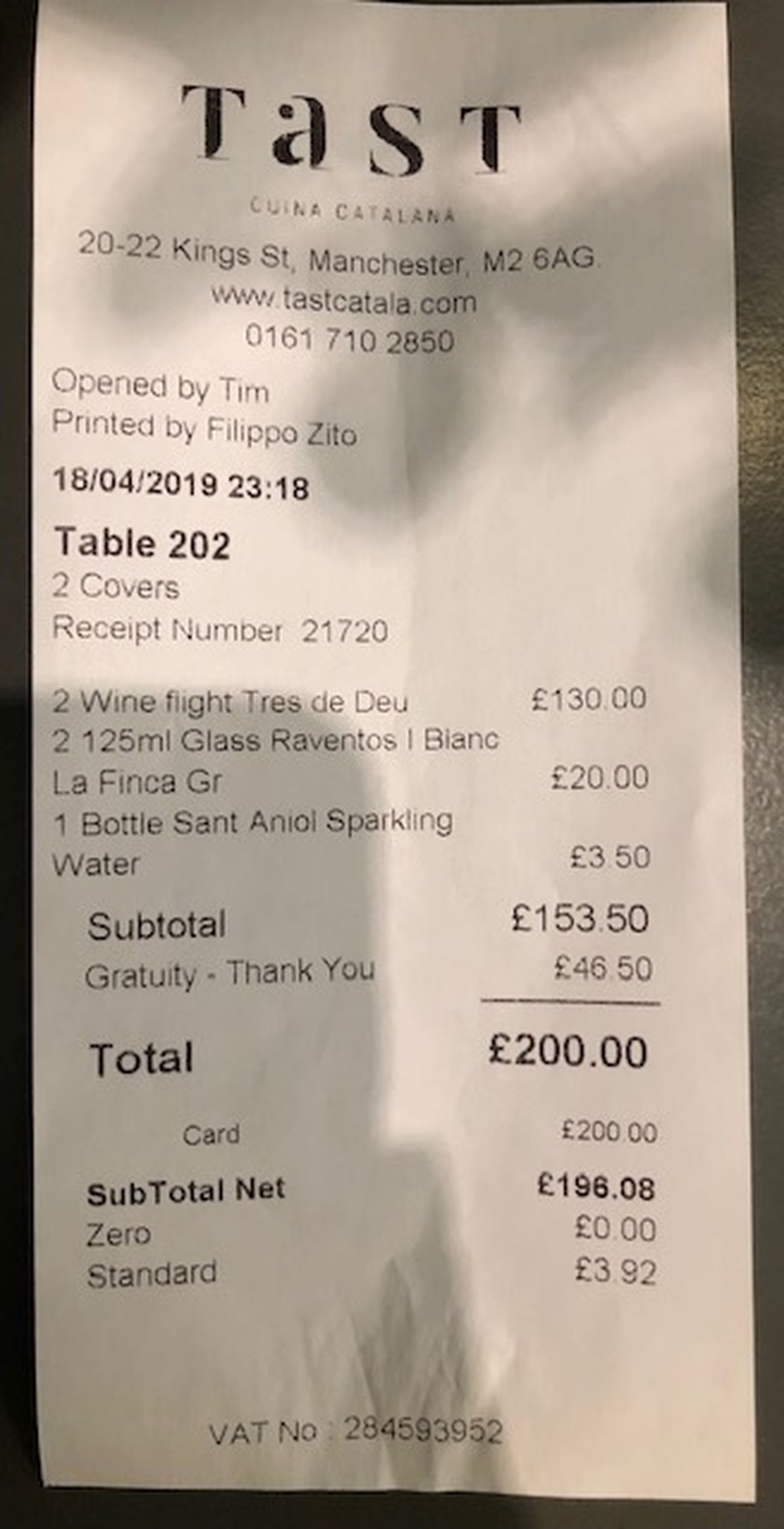 New Manchester Lexicon: Food
What you say
Read Next
● / Sleuth