Sounds from the Other City 2018 line-up revealed

Salford's annual celebration of indie art and music, Sounds from the Other City, returns for its fourteenth instalment this year, having been championing the best of new and emerging talent since 2004.

Alongside music influencers across the region, the STFOC team have curated another bank holiday belter for Sunday 6 May, taking over Salford’s historic Chapel Street area with the customary blend of good music, good times and good intentions.

While, at the heavier end of the noise spectrum, expect psychedelic supergroup Luminous Bodies and dancing wall of sound Cattle.

This year’s festival also features a specially-commissioned world premiere of a new audio-visual collaboration between contemporary composer Laura Bowler and visual artist Rachel Goodyear, performed with a chamber ensemble of musicians from the BBC Philharmonic at the majestic Salford Cathedral.

Thanks in part to its unique promoter-led format - with tastemakers such as Now Wave, Hey! Manchester and Heavenly Recordings each curating a stage - Sounds from the Other City is renowned for sniffing out promising new talent: alumni include current Mercury Music prize-winner Sampha and BBC Sound of 2018 shortlist artist IAMDDB.

SFTOC 2018’s visual directors have been announced as artist and Illustrator duo Stina Puotinen and David Bailey; who will be creating ‘SOUNDSTOWN’, an imaginary community layered over the very real and thriving community of Chapel Street. More info TBA. 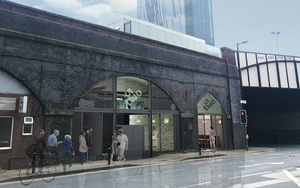