Week 32: in which Sleuth ties together a sleeping man's laces on the train

Surprise as Londoners say BBC should never have left London

The Centre for Cities study claimed that the BBC should never have moved from London to Salford in 2011 because that meant jobs and wider economic benefits for the north – which isn’t in London.

The think-tank’s principal economist, Peter Swinebury, said: “We’re all for rebalancing the economy, just not if that involves money, influence, jobs or indeed anything beneficial leaving London."

“That’s why, despite the creation of over 9,000 jobs in Greater Manchester following the BBC’s move, and that since then the value of the region’s creative and digital sector has doubled, we’ve somehow managed to produce this toilet of a report claiming the whole thing was one giant cock-up.”

The study comes as a number of UK cities that aren’t London prepare bids to become the new home of London-based broadcaster, Channel 4, which is also planning to relocate after it emerged that nobody actually likes London anymore, except oligarchs, estate agents and gits.

Shudehill to get sore thumb

Sleuth was reminded of something by this over-scaled proposal for a 129 bedroom aparthotel in Shudehill. The new building, when given the inevitable all clear from planning, will break the building line here on some properties which go back to the eighteenth century. It’ll stand as awkwardly as a baskeball player in dwarf convention. There's a time and a place for tall buildings and this isn't either. Anyway Sleuth was reminded of something. He recalled that ludicrous nineteenth century intrusion between all the eighteenth century buildings on Portland Street. The expression sticking out like a sore thumb was never more apt, and it will reign once more on Shudehill.

Sleuth was on the first train to London, 5.05am to be precise. He was sat opposite a man who either had an exotic dress sense or had been on a stag do, fallen unconscious with drink, been stripped of his fine Italian suit and Savile Row shirt by his devil-may-care friends and woken up next to a charity shop drop, where the only clothes that fitted him were comedy summer beach shorts and a jazzy cropped vest. He had then crashed out again, blocking the train aisle like an absurb rainbow painted hippo with the worst hangover in the world; a hippo devoid of train etiquette.

Sleuth was also discombobulated on the Manchester to London train by the reading material for sale in the buffet car. Sleuth was offered The Daily Mirror (Sleuth doesn’t read comics), The Daily Mail (Sleuth isn’t a dumb-arse total idiot) and the Golf Magazine (Sleuth doesn’t own a pair of ‘slacks’ whatever they are). Nothing there for Sleuth so instead he amused himself by repeatedly tying together rainbow painted hippo’s trainers laces, so that he tripped up every time he went to the loo, but was so hungover he never managed to work out what kept happening.

A new bar opening in Manchester’s Northern Quarter serving only beer in schooners is expected to confirm that people are morons.

“To be honest we never thought we’d get away with it,” bar owner Shaky Jake Smith told Sleuth, “charging drinkers almost the cost of a full pint for two-thirds of a pint, but the idiots swallowed it – literally.

“All we had to do is add the tag IPA, American Pale or 17% alc. to the end of any old piss, give it a stupid name like ‘Bear Knuckle’ or ‘Ass Clown’, have someone with a beard, cycle cap and half-mast trousers chalk it on a blackboard behind the bar and they’ll actually pay more for less beer.”

Craft beer buff Jonny Butts told Sleuth: “I recently spent six months backpacking around Oz and they drink their beer in schooners. Of course, that is because it’s so much hotter there which causes the beer to warm quicker, and because even Aussies find Aussies unbearable after too much beer, so a smaller glass just makes sense.

“Still, I’m happy to pay £4.50 for a two-thirds of a pint back here when it’s minus three outside,” continued Tommy, “especially if it means I can tell strangers I’ve been backpacking in Oz and that I’m really into Imperial Black Gose right now.”

Shaky Jake says to capitalise on the trend for overpriced cheap booze, he is to follow Schooners bar with another new venture called Cheeky Tiki.

“We’re going to pour measly measures of booze into tankards, fill it to the top with ice, splash some Sunny Delight over the top, set the fucker on fire and charge people £12 – we’ll smash it.

“After that we’re going into street food – did you know people will stand in a puddle and pay £8 for a cheese and bean toastie if you serve it from a shipping container round the back of an abandoned railway depot? As long as you call it ‘independent’ they don’t give a shit.” 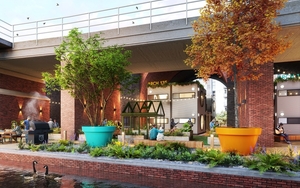