A selective news round-up for Manchester this last week, 3-9 April

The biggest horticultural scheme in Europe will open - at last - on Tuesday 18 May. The Royal Horticultural Society’s RHS Garden Bridgewater, between Worsley and Boothstown, is going to be the smash hit of North West tourism this year. Tickets will go on sale on 19 April 2021 on the RHS website, a year later than anticipated because of the pandemic.

The gardens will provide a significant visitor boost for the economy of up to £14m a year, although that seems a little on the modest side. The main attraction to start with will be the 11-acre Weston Walled Garden with its paradise garden featuring exotic planting inspired by Asiatic and Mediterranean gardens.

Ultimately RHS Garden Bridgewater will cover a vast 154 acres, and since an acre is about the size of a football pitch, that gives some idea of the scale.

All right, all right Betfred is based in Birchwood now but it very much came from Salford and was the child of well-known entrepreneur Fred Done. The bookies have now branched out into buildings and redevelopment with Salboy. Both companies have been successful. Yet, this week Betfred got their knuckles rapped by a High Court judge over the T&Cs of one of their betting products which were not "transparent or fair". Thus Andrew Green from Lincolnshire who thought he’d won £1.7m gambling in 2017 and was then denied the money by the company on a technicality, found himself, with interest, in possession of £2m. There will be no appeal. So the small man beats the huge corporate entity. What were the odds?

This is a good one. The large empty plot of land between HOME arts centre and the Mancunian Way is going to become a large "cabinet of curiosities"; an urban festival filled with all manner of blow-that-Covid-away fresh air. It’ll be called HOMEground because HOME arts centre is behind the notion. Cunning eh? There will be theatre showing plays such as A Midsummer Night’s Dream and Alice in Wonderland. DJs, comedians and musicians will provide the soundtrack while wandering performers will delight the audience. Expect cabaret too. And there will be food, street food of course, which is defined in the UK as "any food not available on a street". It all sounds excellent and fun. The tickets will fly and are on sale from 20 April with the fun beginning on Friday 28 May. Buy your tickets for Homeground.

It seemed like a fine and fun idea. Six women dressed as dinosaurs went for a walk in Moss Bank Park, Bolton, to entertain the kids. Samantha Clarkson, a child-minder, and her friends seem to have been a hit with the youngsters. But not with another type of dinosaur, a man, who complained to them and then phoned the police. The women fled as they didn’t want to be arrested. This writer thinks this is a shame, the idea of police officers chasing dinosaurs around would have been a video viral wonder. You can see the video speeded up for comic effect. Maybe that should be one of the shows at Homeland. I hope the rumours are true that the sanctimonious creep who reported the women was later made extinct by a comet crashing to earth nearby.

It’s looking good on Cheetham Hill Road with the extension and refurbishment of Manchester Jewish Museum. The host building, the handsome Edward Salomons former Spanish and Portuguese synagogue from 1874 has been brought into the 21st Century by the vaguely sinister-sounding architectural practice, Citizens Design Bureau. Externally they’ve done some fine work with that hard cor-ten façade softened with paper doily patterns. The work has cost £6m with £3m from The National Lottery Heritage Fund. Two years in the making, the brand new museum now features a gallery, café, shop and learning studio and kitchen. Max Dunbar, CEO of Manchester Jewish Museum, comments, almost wryly: “After years of planning, fundraising and consultations, plus a global pandemic to navigate through, we cannot believe we are finally here, ready to show the city and the world our beautiful museum." The museum opens on Friday 2 July.

Stretford’s love of traffic cones to continue for a while

The short stretch of Edge Lane in Stretford and the junctions with Kings Road and Chester Road are a confusion of traffic cones. (By the way, a "confusion" is the correct collective noun for traffic cones. Honest.) Any build-up of traffic in those locations results in mayhem. As a cyclist, the cones here and further north on Chester Road don’t make one feel much safer, especially when vehicles cross junctions (as in our picture) and nobody on any mode of transport really knows who has priority. We asked what’s happening with the cones given the current bedlam. Trafford Council said: "Potential designs to assist cycling and walking on the A56 and Edge Lane are currently being prepared in advance of consultation planned to take place in the summer." Summer? That covers three months from June to August. All lockdown restrictions are removed on 21 June. So when will the consultation happen, be judged and a decision made? Trafford is getting back to us.

The new Qbic hotel will fully open its Motley bar and restaurant on 17 May, but the terrace will open on 1 May. There will be an "Antipodean-style" menu with lots of voguish vegan and vegetarian dishes. The chef is a former Iberica in Spinningfields chef by the name of Llinares. Apparently there will be good local ales amongst the cocktails, spirits and wines. It all sounds good. So local ales and local music. The press release also states: "Visitors can listen to some classic Manchester tunes that nod to the days of the Hacienda, Oasis and The Smiths." Odd, isn't it, how Manchester is becoming a bit like Liverpool with the latter’s over-indulgent referencing of The Beatles? I'm sure most of us said that would never happen here.

Council election excitement: It's about the trollies, stupid

Everybody’s clearly buzzing about the May council elections. Everybody is talking about it while sitting in outdoor spaces downing vodka, Red Stripe and munching on Dominos pizzas. Something like that. Still, the leaflets being posted through people’s doors are fun. Jake Welsh is a Didsbury West Green candidate and one of his notices reveals his Twitter account name is the rather confusing @veganfishcake.

Meanwhile, in Longford Ward, Stretford, the would-be Liberal Democrat councillors are worried about trollies. "Abandoned trollies reported on Talbot Road" is one alarming headline. There’s a picture too. Then there’s another one also pictured, screaming, "More abandoned trollies, this time on the Cricket Ground Estate".

Please note the trollies being referred to are not carelessly discarded underwear, but shopping trollies. It seems the problem with trollies in Trafford, according to the Lib Dems, is the current Labour administration rather than the people who steal the trollies and abandon them. Is this a new national initiative from the Liberal Democrats? Power through trolley clearance. It could be a winner. 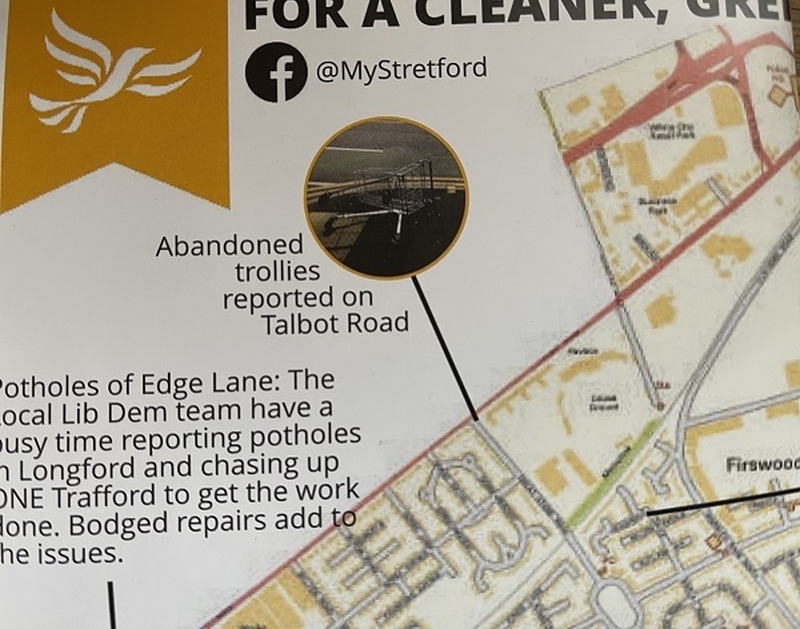