Ruth Allan on a new Syrian venture worth the trip

Stretford’s new (and only?) restaurant, Samir, has evaded much social media hype since it opened at the start of March. The venue was previously known as Bistro 1116; a pop up restaurant offering different concepts for a month at a time. Samir, on the other hand, is a permanent venture by Samir Hamwyeh, serving food inspired by the chef’s former homeland of Syria.

As far as I’m aware, it’s the only place in Manchester – let alone Stretford - cooking up both Middle Eastern classics and typical Syrian dishes such as quzi. This layered, savoury rice dish is packed with spices, lamb mince and vegetables, baked in wafer-thin filo and served with thick yoghurt, and it’s worth the trip alone.

Specials are excellent too. Loubieh (£4) is a simple dish of green beans enrobed in a rich olive oil and garlic sauce that’s served cold and tender. We also try the plump, rice-stuffed courgettes (£8), served with a spiced tomato sauce. The courgettes are soft and aromatic, a stock of peppermint, garlic and lemon having slow-cooked the rice and lamb mince mix inside until tender. They shimmer in the centre of the table like ripe fruits, releasing their treasure as you cut through the flesh with a spoon.

The waitress calls this dish ‘a courgette thing’, and when Samir comes over to chat to us (as he does to everyone who comes in; there are only about eighteen covers), that’s what he calls it too. Using Google translate, and a notepad, we come to the conclusion that it could be called something like kose meshehe.

After countless attempts at making my own, in my opinion, the perfect tabbouleh is largely very finely chopped herbs. A relish, if you like, but herby. And that’s exactly what we have here (£4). Samir’s fattoush offers a delightful remix on the tabbouleh formula with added wafers of crisped bread (£4.20) while soft, heart-shaped falafels (£3.20) are another favourite done right. Hummus and smoky aubergine mutabbal (£4) round off a strong mezze game.

When it comes to mains, the aforementioned quzi (£8) is brilliant. It’s also a classy partner to the kebab selection. Grilled chicken (shoqat, £9) is coated in a red, thickly spiced sauce, and while a seekh-style mix of lamb and walnuts (£9) is served with cubes of halloumi. The only forgettable dish is sheesh tavooq (lamb kebab, £9) which doesn’t sing with freshness.

There are just two desserts. Kunafah (£4) sees baklava-like pastry served over a gooey, salty cheese, soaked in syrup and generously strewn with crumbled pistachios Qutayet, (£3) meanwhile is more of the same cheese, but wrapped up and deep fried in a smooth pastry, like a Middle Eastern McDonald’s Hot Apple Pie. And I mean this is in a great way. It’s also served under a slick of syrup and pistachios. “I L.O.V.E IT”, my son spells out slowly, gooey cheese and syrup running down his chin. Having eaten nothing but fish fingers for the majority of his life, I’m glad he’s branching out.

That said, Samir’s won’t be for everyone – largely because it’s not exactly polished. The restaurant has got a jaunty blue paint job, which calls out to the drivers that zoom past the front door every day, but the former pop-up restaurant space is in need of some TLC. The front door handle is half attached, the bathroom decked in mismatched bits of wallpaper. If this were my place, I’d change the table clothes after every customer. And maybe lose the grubby curtains. But Mancunians are a loyal bunch when it comes to good food.

We arrive at 5pm and there’s only one table in, but by the time we leave at 7.30, it’s full of local couples sharing wine and food. I get the impression that people are just wandering over and having their supper here, rather than cooking at home. The prices make this possible, as does the general air of hospitality and lack of pretention. Samir comes over at the end and tells me he’s also looking for a new front of house person. Arabic would be useful but not essential. So if you like the sound of Samir - or if know someone who might be suitable – get in touch. 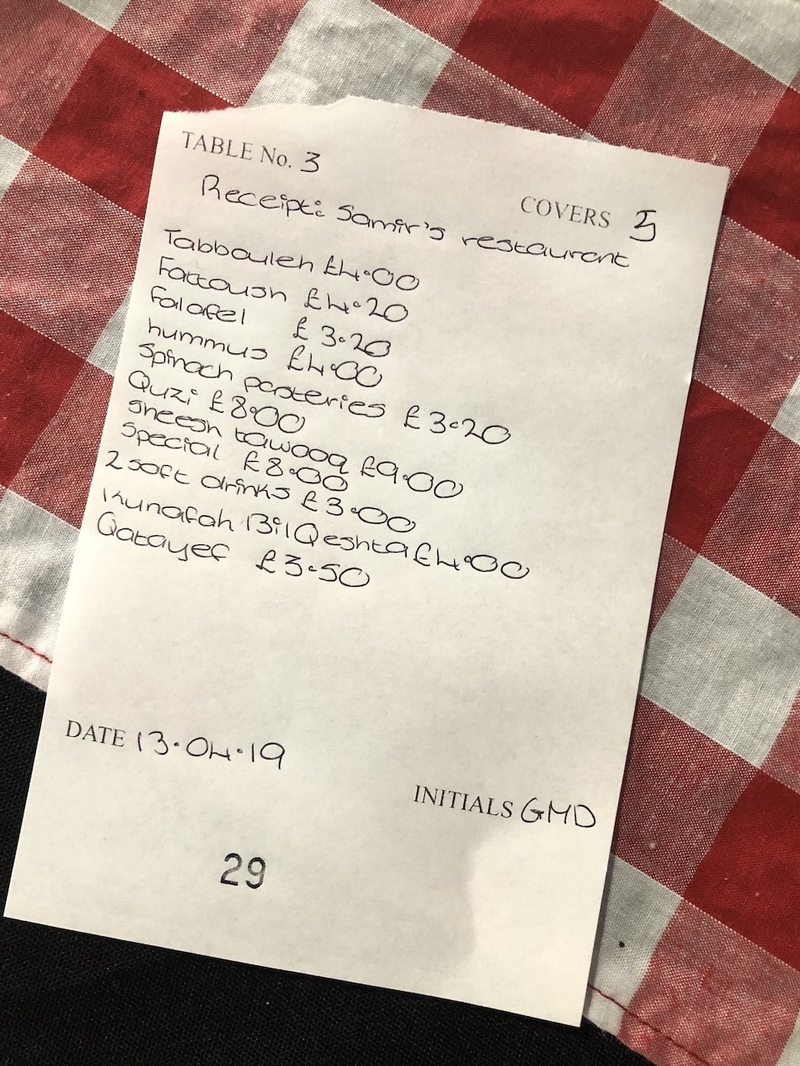