THE male couple next to me were looking alternatively crazed and transported with joy. Their eyes were wide and their clothes all red, they were wearing natty headgear. Although they'd been born in 1968 - or not long after - they didn't look almost fifty. They were dancing without moving.

This isn't some kitsch recreation of the period from some jaded marketing team, this is the real crazy and crazed deal

The interior of the Armenian Taverna needs to be spot listed as The Manchester Museum Of The 1970s. 'Trope' is currently one of the most over-used word in the lexicon, along with 'meme' (shame they are both so bloody ugly), but The Armenian Taverna carries all the tropes of the '70s and much more with a big fat dollop of extra wonderfulness.

This is the absurd mural that stretches around much of the Albert Square basement dining room. The contrast with the flashy high-design of the nearby and recently relaunched Caffe Grande Piccolino is so amusing you laugh out loud. In fact, if you're coming here have a drink there first. The difference is diverting.

Despite its curious perspectives and individualistic, er, technique, I adore that mural. There's also signed pictures across other walls of 'celebs' who visited the Armenian when it was the bee's knees in the seventies (the pictures, of course, include George Best). The Armenian Taverna clearly gave San Carlo restaurant the idea to festoon the walls with photos of celebrity patrons. Thing is, with the Armenian Taverna there are no recent pictures of celebs, alongside a few obvious gaps where perhaps the pictures of Jimmy Saville, Stuart Hall and Rolf Harris have been removed.

Be careful you don't miss the entrance though, which is hidden away on the left and down the stairs, right next to the equally eccentric Wippells, which sells all manner of gentlemen's hats and also clothes and accessories for vicars and priests.

Where the Armenian beats Caffe Grande is in the table cloths. Nice touch that. The menu displays the close relationship between Turkish and Armenian cuisine before the hell of the Armenian Genocide during World War I. There are meat balls, kebabs, meze, lots of aubergine, walnuts, lentils, chickpeas and so on.

We went for halloumi and whitebait starters. They were from the excellent value lunch menu - good quantities of grub for around a tenner for two courses. There was a decent salsa that helped the halloumi alongside a really very good and evidently homemade tartare for the whitebait. Whitebait in Armenian is tapakcdzknik. I had our helpful waitress help me pronounce it and made a complete sturgeon of myself.

Mains were unexceptional if enjoyable. The vegetable moussaka was on the plain side with again a good spicy sauce on the side which would have been far better incoporated into the main event. My havi khorovac (aka marinated chicken thighs with rice and veg) was much more distinctive, full of chunky flavour, well timed rice and lots of veg which helped bolster the dish and turn it into a proper belly-filler.

The menu had as many amusing quirks as the marvellous murals. 'Peaces of pork' anybody? Meanwhile 'for 6 or more people partys there is a discretional 10% service charge'. How very political.

I like the simple house white that came in half a bottle for pennies and delivered via a jug; I like the crazy decor and the wild mural; I like the service and thought in terms of value, while the cooking wasn't exceptional, it is a good choice for a curious lunch or early evening meal.

I want the Armenian Taverna to still be around in another 48 years - with the same murals. If not, I want a museum to buy the decor and exhibit it, to show off the utterly bizarre taste of the late sixties and early seventies. Remember this isn't some kitsch recreation of the period from some jaded marketing team, this is the real crazy and crazed deal.

Rating 12/20 (Although for the sheer old-fashioned decor, it's worth a trip) 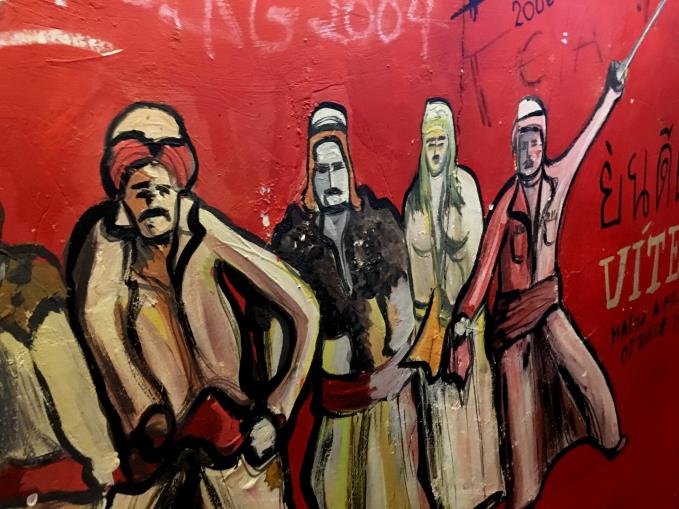 Is this the 'people party'?