Manchester Metropolitan University is becoming the essence of coalescence, gathering its component parts together around Stretford Road and All Saints. This makes sense if an institution with 34,000 students is to have coherence. Thus instead of placing a 50,000 sq ft Institute of Sport next to the Etihad Stadium in East Manchester, they’ve decided to do up Winnie Mandela and Bruce Forsyth. The former Students’ Union on Oxford Road was named after Nelson’s missus in 1984, but when she became toxic in 1989 following the death of Stompie Moeketsi, it was for a short time named the Bruce Forsyth Building, after the ultimate light entertainment trooper. It reverted shortly after and sensibly to just the Students’ Union. Now, the vacant building next to the Mancunian Way is to be part demolished and rebuilt as a gateway sports centre for MMU by BDP. Rumours are that it will renamed the Mick Hucknall Workout Centre after the MMU alumnus and former Simply Red frontman...but maybe not.

The lido to end all lidos

The complex of retail, sport and entertainment that is Dumplington is getting wet. We’re talking the Trafford Centre and area, of course, and the new latest, wham-bang, attraction is starting to flesh out. This is a well-being resort on the crummy shed that is EventCity. It will take up almost 30 acres, an astonishing area. We’re talking a massive lido, a superlative lido, a lido to kill all lidos. Well, a bit more than a lido actually. It will be tropically themed with warm water and be an all-singing all-dancing creature called Therme Manchester. The numbers are, as mentioned, big: a 700,000 sq ft resort building, a 43,000 sq ft public square, a 38,000 sq ft lake and 1,500 car parking spaces. Due to open, rather improbably in 2022, we’ll be able to forget the car by then and take the tram to this little bit of Dubai in the NW. In fact let's call the whole area Little Dubai.

Property and development always abound with buzz words. A biggy at the moment is ‘transformation’ or ‘transformational’. This is one Manchester Airport adores. They are in the midst of a ‘£1bn transformation project’, an extension of Terminal Two. The first phase will compete in 2020 and be fully complete in 2024. There’ll be all sorts of improvements next year to security, departures and arrivals, although presumably what most passengers simply want is to make the currently ‘herding cattle’ aspect of getting through the airport to ease.

Confidential has been talking to some of the operators in Albert Square. They have questions about the impact on their businesses for the minimum of three and a half years it is due to be closed. The questions include: Why does the square need to be closed for so long? Why does the whole square need to be closed? Why can’t only a section of the square be closed and the rest of the square be used as a public space? Has proper consideration being given to local businesses? What will the main civic space of the city look like for the period it is closed, what will visitors see? Will it be tastefully decorated or look like the recent re-working of Chester Road roundabout? We’ve asked the question and there will be a full article soon looking at the proposals in more detail.

Curious Piccadilly building gets a boost

One of the more curious little structures in Manchester seems to have secured its future. This is Indemnity House, from 1910, and it sits on Chatham Street, adjacent to the former Union Bank from 1911, which fronts on to Piccadilly. They are a pair of shabby tramps at present, looking back to grander times, and a sad intro into the city from Piccadilly Station. Indemnity House was formerly Manchester & Salford Boy's & Girl's Refuges and Homes Society and has some lovely Arts & Crafts details. It had a playground on the roof. There was accommodation for kids who’s circumstances could be investigated and there was even a remand section where children accused of crimes could be housed instead of an adult prison. After a period of YMCA occupation, it has been sold for £1.65m to create a host for a language school, British Study Centres.

The former Union Bank next door has big plans earmarked for it too. While the classical building by esteemed architect Percy Scott Worthington will be retained, a 23 storey tower will punch up from the empty plot next door connecting with the old bank. This will be a 354 bedroom hotel by Japanese group Toyoko Inn and designed by Stephenson Studio. That is if they ever get started - Toyoko Inn have owned the site since 2014. The latest planning is from autumn of this year, which looks more hopeful.

AXIS: the most controversial tower opens its marketing suite

The marketing suite at Manchester's most controversial new building opens this week - see our article. There are 17 apartments left for sale out of 168 starting at £294,700 climbing to half a million. While finishing touches are made to the double height lobby, the remarkable cantilevered engineering over Rochdale Canal can now be viewed. This is a large building on a postage stamp site. There's a new bridge over the canal as well. The 305ft building was designed by JMA. It is due to complete before the New Year, with the first residents moving in by the end of January.

Albert Square reborn: We look at the plans. We have questions
● / Property

Property roundup – Refuge centre to language school, terminal news and the biggest lido
What you say
Previous Article Next Article
Read Next
● / Property 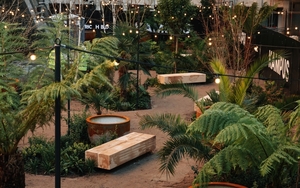 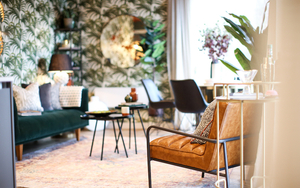 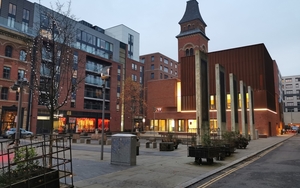 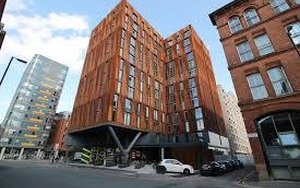