Build it high, build it big. Confidential doesn't mind the tall towers scratching the clouds in Manchester and Salford. As long as nothing quality is sacrificed in terms of older, characterful buildings then we are all for them. They lend huge positivity to the city. It’s even better when they climb from previously deserted brownfield sites. Many come from Renaker, that Northern company who never hang around. Turn your back and they’ve flung up a 350ft building before you can say ‘concrete particulates’.

Renaker have now secured loan funding to the tune of £123m from Maslow Capital to help deliver the 664-home, two-tower Crown Street project in what will be our mini-Manhattan. In other words that bit of Hulme between the Mancunian Way and the River Medlock, known as the Great Jackson Street framework area. The two towers will be 52 and 21 storeys respectively. The tall one is called Elizabeth Tower and includes 484 apartments, rooftop gardens (naturally), a gym (obviously) and a 44th floor pool (crikey). And the architect...go on guess. Who designs most of the tall structures? Yep, SimpsonHaugh. Jeez, there are other architects in this town. 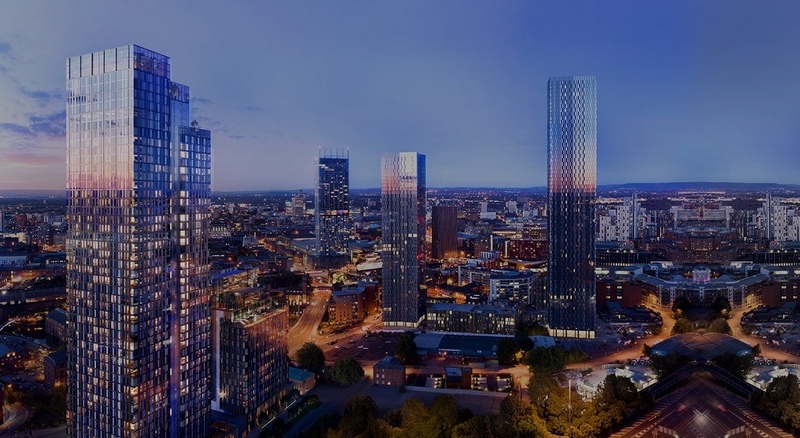 Lit up and dynamic

Confidential noted it with Beetham Tower ages ago, tall residential buildings create dynamism in the night sky. Offices such as the CIS tower don’t, as they turn off the lights after working hours. Apartments give lift to the city in the evening. Already we can see this with the 460ft West Tower in the Deansgate Square complex which is already over half let weeks after opening its doors to tenants. There are four penthouses in there as well and these are being snapped up for very healthy four figure sums per month.

Planning approval has been given for the huge Feilden Clegg Bradley designed lump on High Street opposite the even bigger lump of the Arndale Centre and at the junction with Church Street. This is 22 storeys high, has 360 apartments and, while it is a lump, it's an elegant one with some real design poise. It replaces a scattering of properties including the former Brutalist home of a Yates’ Wine Lodge, where Brenda and Barry used to quaff Aussie Wines and get into fights, or something like that. The site of Ruby Lounge will go too, where many a band started out and where on one occasion there were Goth lap-dancing nights. Councillors Adele Douglass and Sam Wheeler have complained about the new building, lamenting its size, with words such as ‘disgusting’. They undermined their argument by complaining that ‘Manchester institution’ Cafe Metro would close. It’s not an institution at all; it’s an old-fashioned transport cafe and, while it’s a shame it will go, the value to the street and the city of the new building will be far higher. We wonder when Douglass and Wheeler last went in Cafe Metro...

Church Street doesn’t have a church on it, so why is it called Church Street? There used to be a functional church called St Paul’s with a very handsome, if odd, stone tower here, that’s why. It was demolished in the sixties and replaced with that monument to grace and beauty, the Church Street multi-story car park. Ha, it’s funny how crass planners and developers were back in those post-war days. Not only did the disgusting car park ruin the streetscape but to add insult to injury it was clad in shit-brown tiles. Were these people aesthetically blind? And will commentators say the same about the buildings of this generation? Less so, we hope.

Remedy for the hospital with Citylabs

Confidential was in Citylabs 1.0 on Oxford Road a couple of weeks ago with Steven Cochrane from Corridor Manchester, wowing Portland Oregon folk with this fine city’s technological and academic prowess. Citylabs 2.0 is under construction, next up will be Citylabs 3.0. These will cost £60m. Now plans have been drawn up for Citylabs 4.0 at £35m. These are clumped around the University hospitals site and utilise old buildings that once formed the Royal Eye hospital and St Mary’s hospital. Rowena Burns of Manchester Science Partnerships has said: “At Citylabs we have created a dynamic ecosystem, a place where companies and researchers work side by side, benefitting from being co-located on Europe’s largest clinical academic campus.” A typical tenant is global diagnostics company Qiagen, which will move into Citylabs 2.0 and use it as its European hub. By the way, the Portland people were overjoyed when, on their walk back into Manchester, they encountered Portland Street. It stopped them talking about dynamic ecosystems for a while.

The world’s ugliest retail park has bitten the dust and is to be replaced by a car park for up to two years. Approval has been given for the council’s plan to create revenue on the Great Ancoats Street plot through parking fees while it lies fallow waiting for development. The car park notion has been fiercely resisted by several bodies including the nearby New Islington Free School and several local councillors. The recent adoption of a climate emergency motion by the council was sarcastically underlined at the planning meeting. Specifically, it was thought the car park would increase traffic on the already congested Great Ancoats Street, especially on match days at the Etihad as people looked for somewhere to park. New Islington School stated that increased pollution levels could harm their pupils and the creation of a car park set a bad example to students at a time of climate debate. There was hope expressed that affordable homes could be built on the site way before the two year mark was reached.

If you thought the demise of St Paul's in the Northern Quarter was bad, the most inexplicable demolition was that of St Matthew's in Castlefield from 1825. This was demolished in 1952 and was a rare and precious early neo-Gothic gem from Charles Barry who would later design Manchester Art Gallery and the Palace of Westminster. The tower was very noble rising above a dramatic porch. The church formed an ensemble between the iron and glass market and exhibition halls on Liverpool Road. Its replacement is a yawn-inducing bog-standard office block, albeit once home to Manchester Confidential.