If there’s anything that’s guaranteed to make you proud to be a Manc, it's this.

Manchester’s never been short of incredible and inspiring figures, but a few hours at The Pride of Manchester Awards really made us realise just what this city means to us and so many others.

From an 82-year-old lady who’s fostered more than 300 children, to a Salford community hero who uses her voice as a survivor of domestic abuse, we spoke to loads of amazing people with even better stories. We met Scary Spice too, so it was icons all-round.

This year’s awards were hosted at the Kimpton Clocktower Hotel by Coronation Street actor Kym Marsh. Talking to the actor about what this event means to her, and what Manchester stands for as a city, she made it clear: “It's so important to celebrate the people and the heroes that live in such an incredible place. It’s a place that I hold dear in my heart, and just when you think it’s gotten to that point where it's about to be brilliant and couldn’t get any better, it just does.”

The Pride of Manchester awards are a regional spin-off from the nationwide Pride of Britain awards, and are back after a two-year hiatus. “The last two years have shown us it is more important than ever to acknowledge and reward the people who go the extra mile to make a difference,” said the POM team.

On the red carpet, we chatted to everyone from BBC Radio Manchester presenter Jsky, to Love Islanders Faye and Teddy and ex-world champion boxer Ricky Hatton. All dolled up and ready to meet some remarkable people, the stars all agreed that these awards are the perfect opportunity for ordinary people to get the recognition that they deserve for their extraordinary actions.

For Jsky, a judge on this year’s Pride of Manchester panel, “It was great to choose the winners and read about their stories, but I think everyone that was nominated, everyone that’s supporting the nominees, like their friends and family, they all played part in inspiring me and hopefully inspiring others to continue to make Manchester the great place that it is”.

Boxer Ricky Hatton, an ambassador for several mental health initiatives and this year’s presenter for the Special Recognition award, said, “I’ve always been a local lad, and to present this award to Mike Palmer, a firefighter who lost his daughter to suicide, is a massive privilege. I think tonight is always important, but coming out of such a horrible two years, it means more than ever.”

The Spirit of Manchester

This year’s Spirit of Manchester award went to Professor Erinma Bell MBE, and who else would be presenting the award other than the classic duo that is Mel B and Andy B?

After asking Erinma, a peace activist from Moss Side who has devoted her life to protecting young people from violent crime, what it means to be the Spirit of Manchester, she proudly explained: “To think that people have sat around a table and decided that everything I have done, and still do, embodies what a Mancunian is about, I think that’s great. It’s an honour”. Erinma also founded the local community organisation CARISMA after witnessing a shooting with her husband back in 2003, she previously worked for Save The Children, and has most recently been appointed a Labour councillor for Moss Side.

For Andy Burnham, “We’ve had a tough few years since this event last took place, and we’ve all been through a lot in that time. So there’s a sense tonight that we all want to celebrate being back together. It’s time to celebrate the spirit of the whole place, and Erinma is a colleague too. To stand as a councillor and win with a majority of 2,000, I’ve never heard of that before - which says a lot”.

We also asked Andy what he is most proud of about Manchester, and he simply answered: “The people. Straight off the bat. It is different in terms of the warmth, the generosity, the humour and everything. I know that the people are our greatest asset and to get to work with and celebrate these amazing people is great”.

This year’s winner of the TSB Community Hero award was Salford-based Jane Gregory. After two local women were murdered by their abusive ex-partners, Jane, who had grown up in a violent household herself, set up the Salford Survivor Project in 2013. Since then, Jane and a team of 25 volunteers have helped thousands of men and women over the past nine years, accompanying people to criminal or family court cases, police meetings and housing and medical appointments whilst operating a helpline that runs seven days a week.

Backstage Jane laughed that she and actor Angela Griffin, who presented her with the award, had become best mates. Stunned by the recognition she’s received, Jane said, “Tonight is all about the children, and the amazing things that they’ve gone through, so to put me on the stage with all of these other inspiring people is surreal. For me, it's about raising awareness about domestic and family abuse and making a change. It’s time that we really started to recognise that there is life after abuse so that we can really start to move forward”.

Other awards this year went to folk like Mike Palmer, a firefighter who lost his 17-year-old daughter to suicide and teamed up with other grieving fathers to raise money and awareness surrounding these issues. The Special Recognition award went to plumber James Anderson who provided over £1.2 million of support for vulnerable people, and the youth of Manchester was celebrated with a Young Fundraisers award for twins Ruben and Elena Evans-Guillen, a Child of Courage award for Pixiebelle Sykes, and a Teenager of Courage award for Liam Preece.

Professor Tony Redmond OBE won the Lifetime Achievement award for his role in the UK’s response to international humanitarian disasters. Lydia Ina was this year’s Marcus Rashford Children’s Champion for her foster work with over 300 children and her community work in Nigeria, and PC’s Simon Toft and Alicia Snowden won the Emergency Services award after tackling a particularly violent crime in Stockport.

A full list of this year’s Pride of Manchester award winners can be found online, and it’s well worth taking the time to read the incredible and inspiring stories associated with each and every nominee. We could listen to them all day long.

The full Pride of Manchester awards show will be streamed on YouTube on Tuesday 17 May, and if there’s anything that’s guaranteed to make you proud to be a Manc, it's this.

Read next: Opinion: 'If history repeats itself, Oldham will fall even further behind'

Pet-a-Porter: Manchester’s best dog shops
What you say
Previous Article Next Article
Read Next
● / Things To Do 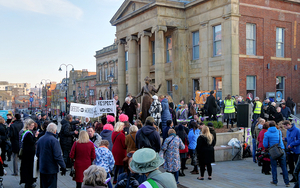