ANY lady with a mane of curls like Susan Sarandon in her Witches of Eastwick days is a lady you need to know.

Nicole Farhi, and her hair, gave Harvey Nichols in Manchester a little bit of French cool as Farhi was in town to “show a little capsule collection from this summer with a little fashion show” for some of the store’s clientele. Before the event, Confidential got five minutes to quiz Farhi on Manchester, London and even Milan.

Farhi’s French accent was infectious but, regrettably, my French isn’t so I abandoned all intention of greeting her with “Bonsoir, comment ça va?”

“It’s nice for me to get out of London and see what is happening out there… I just arrived this afternoon and came straight here but I’m hoping to see quite a few of the ladies and the men, maybe” she said of her first trip to Manchester. 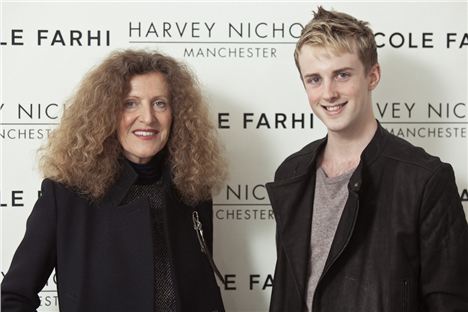 On to Milan, the home of Nicole Farhi’s menswear catwalk shows. Farhi showcases womenswear in London during the twice-yearly London Fashion Week schedule and menswear goes via the Mediterranean. However, after Farhi recently announced her collaboration with this June’s new menswear showcase, London Collections: Man, could all this be about to change?

“We are actually not going to do a fashion show in London,” she said. “It was too short notice. We are going to do an event and show some of the pieces that will be shown a few days later in Milan.” Oh, so, not exactly the groundbreaking move we were envisaging.

Nicole plays her cards close to her chest. Before I was about to abandon my probing she pipes up. “We did used to show menswear in London years ago actually,” she admits with fashion weeks of yesteryear popping up in her eyes like photographer’s flash bulbs. Perhaps a hint of nostalgia for the UK capital in her velvety French tones, “but, it did not work,” and then again, perhaps not.

If we can’t get Farhi’s menswear to London, perhaps we can get Farhi back to Manchester? “Yes, why not,” she said, looking over my shoulder to catch the attention of her PR.