Right now, as the kids say, Manchester is fire. No, not “on fire”, grandad, just “fire”. Honestly, that’s how they say it.

Our food scene is literally ablaze in 2022 though. From MFDF’s scorching 25th birthday celebrations complete with "fire pit" to restaurants’ wanky marketing strap lines: “Slow fires kitchen”, “Fire, chops, and beasts”, er, "Whopper to a flame". Even Withington’s getting in on the fiery action. Fire is most definitely hot right now. A bit dark-humoured, really, in these times of climate crisis.

Not quite earth mother Koh Samui beach cafe vibes on Bridge Street but there’s a nod.

Food cooked on fire is popular for good reason. Who doesn't love the intense flavour a lick of flames adds to a skewer of meat or a wedge of aubergine? Humans love fire and fire loves food.

Northern Thai-influenced Neon Tiger on Bridge Street is one of the latest to put BBQ front and centre. This new venture comes from Freight Island’s Dan Morris, his brother Ben and his old pal Bart Murphy who has Bunny Jackson's and Wolf At The Door on his CV. All part of the well-connected crew that owns or runs half the city's drink-led trendy spots (and some in the suburbs). It's safe to say this place is what you'd expect from a team like that. Cool branding, on-trend, accessible, crowd-pleasing food and confident, modish staff.

My impression as I arrive for a well-needed Friday cocktail before dinner is that it’s less wanky and more welcoming. Staff are friendly and laid back, tunes are modern indie (think Bloc Party), interiors are pared back and mercifully devoid of those godawful ubiquitous pink neon signs and crockery is cute dipped pastel ceramics. I read somewhere that they kept a lot of the fixtures and fittings from its former life as Grindsmith coffee shop, and you can tell.

Retro cocktail ingredients are also having a moment. I’ve seen blue curaçao, Midori and Malibu rear their garish heads on even the most respectable of cocktail bar menus lately. Perhaps some kind of post-pandemic embracing of all things kitsch. My grandma would be loving it.

At Neon Tiger too alongside the classics is a list of specials that channels the video for Club Tropicana: My Melon Melon (£10) features “melonade” and melon sorbet with English sparkling wine. It's a 70s starter in liquid form (thankfully without the ham) and looks more sophisticated than I expect, in a wine glass with a shot glass of melon sorbet on the side. You might call it an Only Fans Martini. The sorbet is the same colour as the pink Himalayan salt candle holders on the tables. Not quite earth mother Koh Samui beach cafe vibes on Bridge Street but there’s a nod. It's nice enough but a bit too sweet for me.

My friend’s Passionfruit Passionfruit (£9) has all the vanilla, rum and tart tropical fruit she needs in a retro hurricane glass. Wines are all low-intervention ones via Ad Hoc NQ, according to our very knowledgable waiter, but with the aim of not being too challenging for the casual wine drinker. Our bottle of Peth Wetz (isn't that the guy from Fall Out Boy?) Riesling (£39) is zippy and zingy with just a whiff of characterisic gasoline, marrying really well with the food. You’d never guess it was an unfiltered natty.

The menu is shorter than I was expecting, with only one soupy noodle option which we’re told can be shared as part of a three or four dish spread. Ah yes, another trend, small plates to share.

Peanut satay beef skewers (£8) are meltingly tender, the sauce deeply savoury with no hint of the sweetness you sometimes find with satay. Cucumber pickle brings balance, sweet more than sour it cuts through that richness well. I can't detect a whole lot of charred flavour considering the BBQ-hype, my beloved Rusholme kebabs are far more flame kissed but it's a very nice bit of skewered meat nonetheless.

Grilled chicken in fish sauce caramel (£7) is my favourite dish on this visit. Equal parts salty, sweet and sour with crispy skin and juicy flesh, I would eat a lot more chicken if it always tasted this good. It looks a bit peaky from being marinaded in green spice paste but personality overrides looks and I would definitely order it again.

Handmade noodles, coconut red curry, grilled chicken, pickled mustard greens (£9) is an iteration of Chiang Mai's famous khao soi even if it doesn't say so itself. The dish comes topped with what looks like an uncooked block of instant ramen but is actually crisp fried noodles that you are encouraged to scrunch with your hands and mix into the soup. It’s a textural treat as crunch meets the straggle of chewy cooked noodles lurking beneath.

These lovely noodles are freshly made by hand in Manchester by Omar at Komugi Noodles (aka lockdown ramen kit masters YaoYao) who also supplies the likes of House of Fu. The usual coconut milk and fragrant spices of the more familiar (on these shores) Thai red curry are present but there’s a distinct chippy curry note and less of a chilli kick. More intense and creamy than zingy, fresh and fragrant, it’s still a very satisfying bowl of food.

Papaya salad is a helpful barometer of a Thai restaurant. At Thai Kitchen No. 6, expect to go home with a tongue twice its original size, at District, expect something tasty but tame. Here, we’ve got something in between: spicy, maybe too spicy for some delicate-palated Brits, but not 10-fresh-birdseye-chillies-snipped-in-at-the-end spicy, it's made with shredded white cabbage (in lieu of papaya), cherry toms and crisp green beans. To be fair, it doesn’t claim som tum naming rights, calling itself “shredded vegetable salad” (£6) and it's a decent plate of crunchiness dressed in recognisably Thai flavours.

No desserts are listed but we are told there is a pie of the day when we ask - I later discover the pies here are made by Batard. This Thai pie (£6.50) has applied for an American visa - a Thai milk tea flavoured set custard, sweet with condensed milk fills a deep chocolate biscuit pie crust and is topped with vivid purple rubble giving a space-age effect. The rubble hits somewhere between white chocolate and savoury biscuit and we’re told it’s made from Ube, a purple yam. I’m a fan, I really like Thai milk tea, but my friend isn't so keen so it's a shame we ordered two - one would have been plenty to share. Perhaps a lighter dessert option would be a good addition.

Neon Tiger’s the kind of casual dining spot you’d expect to find in the NQ but because it isn’t in the NQ, it’s refreshingly free of weekend warriors for now. It’s only open from 4pm onwards at the moment, setting out its stall as more of a cocktail bar with food if you want it than a formal restaurant. Whispers are lunch is on the cards. I'd definitely grab lunch there.

This is a cool cocktail bar with friendly staff and it’s clear some love has gone into the food. It would be a stretch to say it hits the creative heights of its reported influences from places like Kiln and Temper in Soho and there are some really great Thai restaurants already in Manchester, but it’s certainly a challenge to its casual dining rivals. 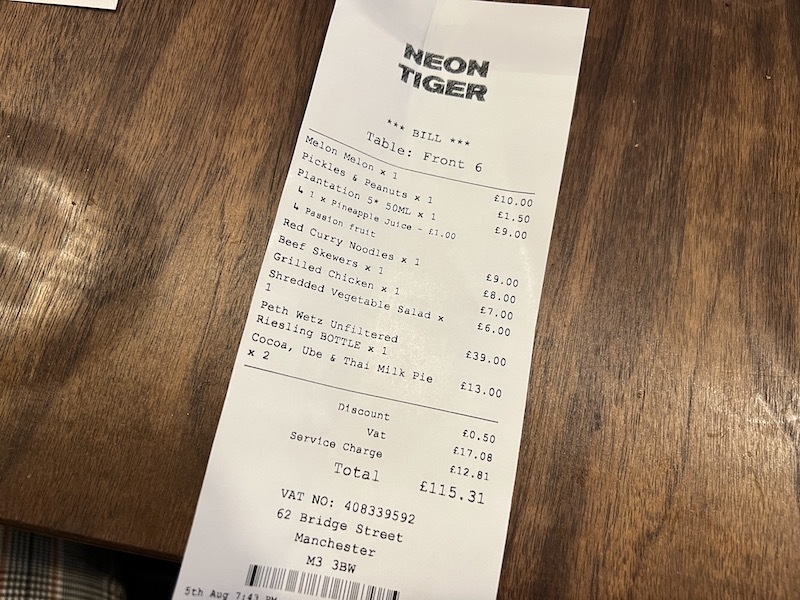