Twelve boozers, plenty of beer, a pickled egg or two and it's ho ho home.

And on the twelfth day of Christmas, Confidential gave to me... TWELVE MANCHESTER PUUUUUUUBS...eleven bags of crisps, ten trips to the loo, nine shocking jumpers, (fill this bit in yourself), and an argument about Brexiiiiiiiit.

Right, it's Christmas and above all that means, well, yes family, but also beer. It is the season of good beer to all men/women, after all.

So we've put our heads (and pint glasses) together and come up with what we believe to be Manchester's first and only Ultimate Christmas Pub Crawl.

Now, you're not expected to visit all of them in one go. In fact, probably best you don't. Or indeed to have much of a planned route, but we'd probably start at The Deansgate and end up in The Marble. What you do and where you go in between is up to you...

This handsome boozer, nestled beneath the lofty Beetham Tower, takes Christmas very seriously - some say you can see the fairy lights from Rochdale, others say 'shut up and get the beers in'. The Deansgate has lots of dinky little rooms, one of the oddest outdoor terraces in the city and ales from breweries such as Coach House, Holts and Greene King. Look out for the handsome raised wooden chairs and the church choir stalls. 321 Deansgate, M3 4LQ

This many-roomed gem, dating from 1811, is chock full of character; elegant wood, lovely tiling, fireplaces and plasterwork detailing over 200 years of pub history. The straight-from-the-street bar area is particularly handsome, but also try the cosy snug round the back. Aside from the very decent Robinsons ale, the BP also boasts the best whisky range in the city with no less than 230 on offer (mostly single malts but also some bourbons). Now if that doesn't warm yer Christmas cockles... 50 Great Bridgewater St, M1 5LE

Peveril of the Peak

The Pev is another real gem. The name comes from the original owner’s stagecoach, which made him enough money to open the pub in the 1820s. This late Georgian end terrace features a festival of external emerald tiling and, sometimes, a proper Corrie-looking washing line out the back. Internally the design is period but also maverick, climaxing in an oddly squashed and triangle bar area with a legendary football table – apparently the oldest pub table in continuous use in the UK dating from the 1950s. That Art Nouveau bar and tiling is special though, as are the ales. 127 Great Bridgewater Street, M1 5JQ

What is a Manchester pub crawl without The Circus? Dating from before 1800, the name comes from an equestrian circus that was founded nearby by Mr Handy. Not so handy for Mr Handy was the sinking of a boat carrying all his performers and horses in 1797. Handily for Mr Handy he was catching a later boat. How this little beauty survived is a wonder, but some put it down to having very few landlords in its 200-odd year history. The most remarkable feature is a bar so small it fits one bar person behind and no-one else (perfect for those hard-to-work-with types). There's a room at the back which plays it safe with both United and City memorabilia. If you love pubs, it's a must visit, but gets very busy around Christmas time. 86 Portland St, M1 4GX

Popular with council types, including the council leader, due to its proximity to Town Hall, the City Arms cuddles and coddles every type of citizen, the two compact rooms and closeness of the tables a breeding ground for conversation - whether you like it or not. Cask ales include Tetley's bitter and mild, plus several guests from the likes of Silver Street, Red Willow and First Chop. There’s also a bizarre outdoor smoking ‘well’, an eclectic selection of books, darts, and perhaps the finest pickled egg jar in the city. 46-48 Kennedy Street, M2 4BQ

Tom's is a bit of a festive institution at Confidential (as is its sister pub, Sam's Chop House, just around the corner). The present building dates from 1901 and boasts one of the best period interiors around, with immaculate green tiling and arches marching back through the building. Order a pint of Landlord, or some proper mulled plonk (none of that Christmas markets crap) and get stuck into some cracking pub grub, like the crispy pig fritters or the beef shin pie...phwoar. 52 Cross St, M2 7AR

This grand building not only hosts the UK’s oldest angling club, but was also the backdrop for Channel 4 student sitcom Fresh Meat, and has an indie showbiz connection with Paul Heaton, formerly of the House Martins and the Beautiful South, as part owner. More importantly, there are six hand pumps serving an ever-changing range of cask ales; ranging from bitters, stouts, milds, golden ales to ultra pale ale. There's also decent food, a lively theatre calendar and the weirdest squashed up royal coat of arms on the facade - that lion looks in pain. 1 Bloom St, M3 6AN

According to the story, Mercury Prize-winning Manchester band Elbow, who record in the nearby Blueprint Studios, refer to this pub as 'The Downfall' - because instead of recording they just get pissed and fall over. And it's little surprise, because this pub - dating from 1903 - is one of those that wraps itself around you and refuses to let you go. And even if you can find the door, finding your way back to town, thus home, could prove a problem... best head back in. There’s a lovely bar, three small rooms, a fine performance space and a convivial landlady called Esther (note: don't go toe to toe drinking with Esther). It's a Joseph Holt pub so expect bitter, golden ale, mild IPA and pork scratchings. Nowt says Christmas like pig skin. 18 Collier Street, Salford, M3 7DW

Say what you like about The Millstone, but we've never had a dull pint in there. If you're not watching Barbara murder Mariah on the karaoke, you might find yourself talking to Headbutt Harrison about the time he rammed a fire extinguisher up someone's arse for stealing his peanuts. Not a great venue for quiet contemplation, but it's Christmas, so sod that for a game of dodge the pint glass. This is a JW Lees pub, so look for seasonal casks like Plum Pudding and Santa's Secret. 67 Thomas St, Manchester M4 1LQ

Behind the skewed Art Nouveau lettering on the façade, you’ll find, right in front of you as you step through the door and across the lovely mosaic floor, an elaborate mahogany bar inside a cosy 230-odd year old gem. Owned by Robinson's Brewery, the then-shabby Castle closed in 2008, but was taken on by friends Rupert Hill (of Corrie fame) and Jonny Booth, made over and reopened in 2009. This very long boozer has perhaps the best snug in the city (though The Briton’s Protection might have something to say about that) and behind that, down a corridor, a beautiful performance room with a glorious timber skylight. Order a pint of Robinson’s Dizzy Blonde and get comfortable by the piano. 66 Oldham Street, M4 1LE

Now this really does have one of the most astonishing pub interiors around, dating from the 1840-50s. Huge Gothic timber pendants hang down from the ornate ceiling, which comes alive with mad quatrefoil tracery. The Grade II-listed pub closed for over a decade following an arson attack in the nineties, but reopened in 2005. In 2015 the pub was named one of the best in the UK by beer buffs CAMRA, and serves the likes of Thornbridge, Squawk, Brewsmith and local craft beer heroes, Cloudwater. Order a pint and drink it all in. 2 Oldham Rd, M4 5FE

What could be more Christmassy than an angel? And if you're lucky, there might even be some shepherd's...pie. Ho ho. Progressively renovated over the years, The Angel is now, deservedly, considered one of Manchester's best pubs. There's real ale (Mallinsons, Kissingate, Spey Valley), food, live music, fire and although the resident ghost has been exorcised, it's still a very spirited boozer. Spread over three floors, there's a restaurant upstairs and a piano downstairs. After me now, 'All I want for Christmas is my two front teeth...' 6 Angel Street, M4 4BQ

This is a beauty. Built in 1888 for McKennas Harpurhey Brewery, it became known as The Marble because of its exuberant design. It's now home-base for Marble Beers; lauded brewers of Pint, Manchester Bitter, Lagonda and a few specials and seasonals, like the Cranberry and Ginger Dark Sour. The original tile and mosaic details are spectacular, and do note the red Lancashire roses. There's also an open kitchen, serving chefs serve up 'modern pub food with a retro twist'. Try the sticky pigs in blankets with Marble beer bacon jam, or the turkey sausage roll. 73 Rochdale Rd, Manchester M4 4HY

Hold on, we've done thirteen instead of twelve. Oh well, one more for the road...

What you say
Got an account? Login, to comment/rant.
1 Opinions
Read Next
● / Best of MCR

Can you dig it? Confidentials meets Manchester Urban Diggers
● / Best of MCR 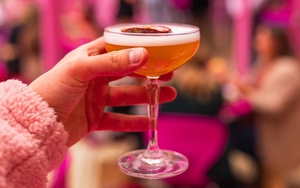 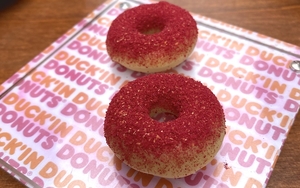 Plus: Milk (not beer) cartons, Czech pastries and a new kids' menu at The French 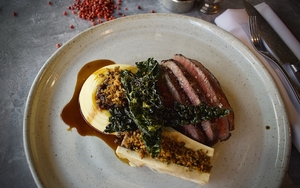 Plus: yet more General Stores, Malaysian cooking classes and more