Style, colour and a solid boff chop all round

Men’s hairstyles say much about the times. Remember the Nike tick shaved into the head? Or the boyband gel-stiff curtains? Or David Beckham's, well, all of 'em.

Nowadays men are more into their hair then ever. The simple no.1 all over just doesn't cut it anymore. Here in Manchester we've seen the resurgence of the high-top fade, the meticulously styled quiff and the sharp line parting. Meanwhile, the fuzzy beard and curly moustaches are still having their day, even post hipster revolution.

But where should a man - be he metrosexual, sapiosexual or lumbersexual (that's a dude who dresses like a lumberjack) - head in Manchester for a trim, a new do or a full-blown wet shave? 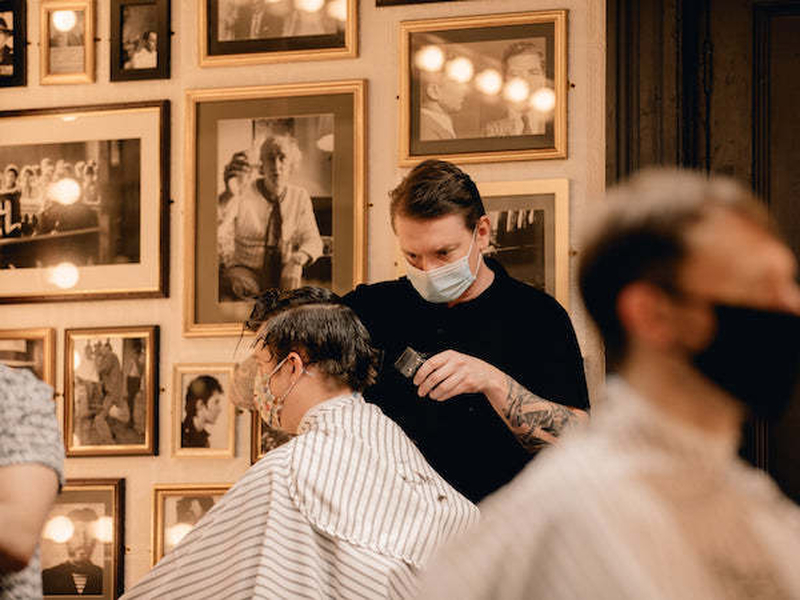 Barton Arcade's cut-throat barbershop is hell-bent on keeping one traditional barbershop covenant sacred. "We're MEN ONLY," says the rather eccentric, bowler-hat wearing owner, Johnny (aka the Baba). “I don’t think there’s any place in a barber’s shop for women, period.” Think of that what you will, but the space is stunning in plush walnut, leather upholstery and spotlights. Here you'll find tattoos, pointy moustaches, flat caps, braces and banter in abundance. You know, real man stuff. Since launching the first Barber Barber in 2013, Johnny has gone on to establish popular shops in Liverpool, Leeds and London. All staff are trained in the highest standards of wet shaving and beard sculpting. 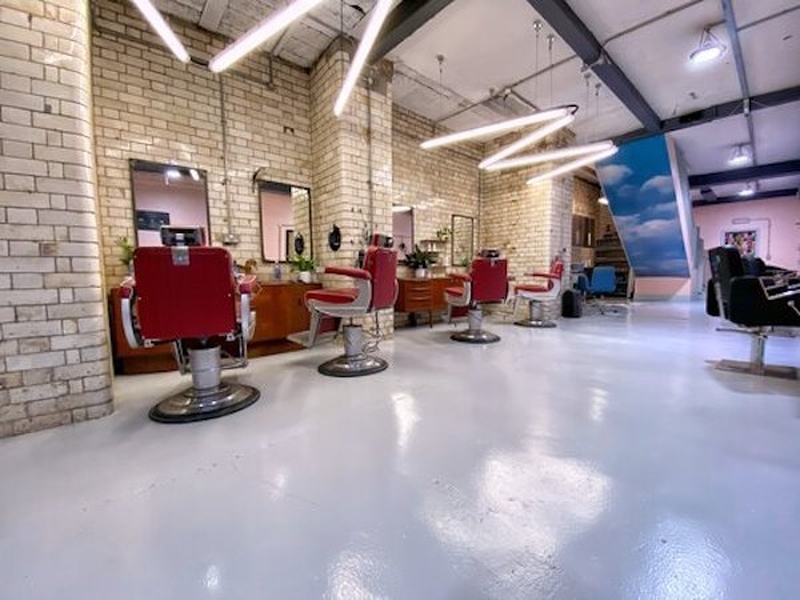 It’s what’s inside that counts. Or in the case of Barber Below it’s what’s inside and down the stairs. Situated in the Northern Quarter in the basement beneath RCNQ on Hilton Street, Barber Below is an inclusive LGBTQ+-friendly barbershop that provides a stylish and inclusive environment for getting your hair cut and styled. With cuts, colour and treatments available, it’s one of the more aesthetically pleasing places to get a trim in Manchester. Appointment only. 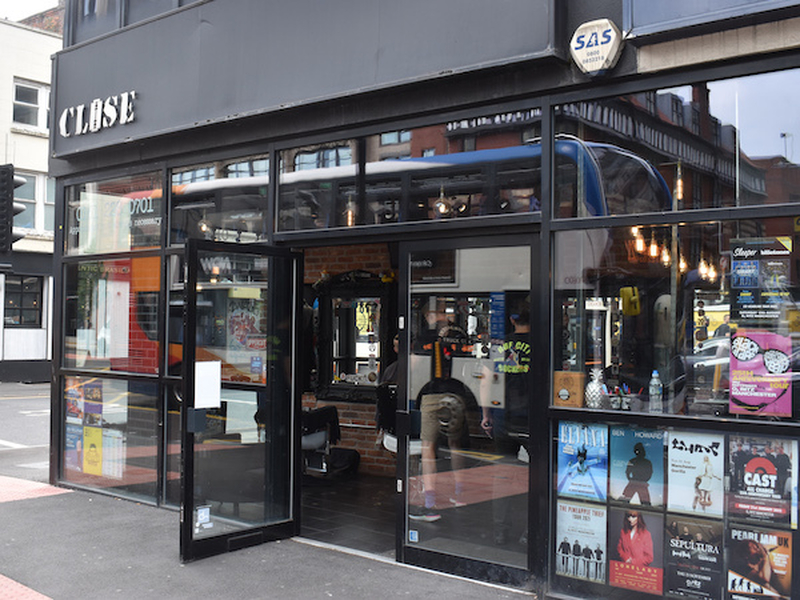 This small, boutique yet well-defined barbershop has done much to make a name for itself in the city centre (it also boasts shops in Chorlton, West Didsbury and Altrincham) and has amassed a dedicated customer base since founder and barber Alex “borrowed money from his grandparents and friends” to open his first fledgling barbershop. Go for regular maintenance and skilful throat shaves and the complimentary bottled beer. 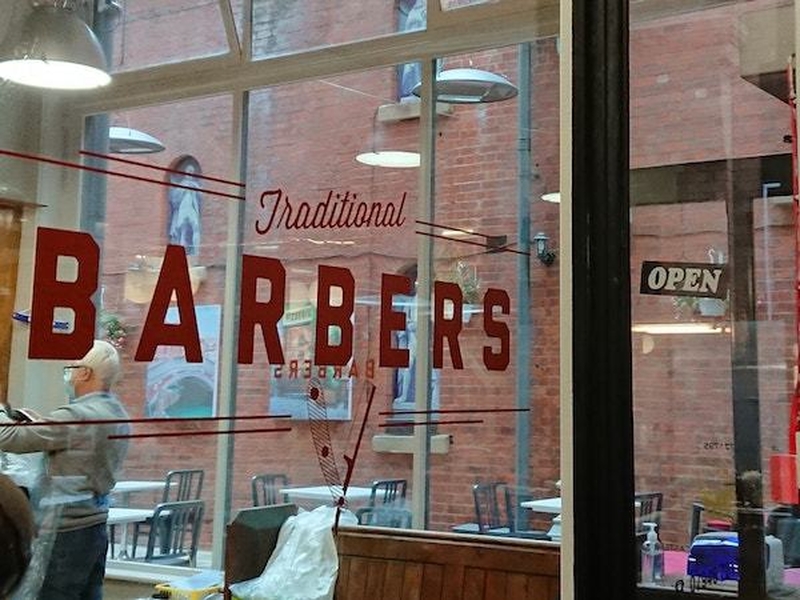 This barbershop is as traditional as it comes – complete with candy-striped barber pole out front. Tucked within the confines of Campfield Arcade, here there’s no faff, no pretension, instead it’s all about trusted, efficient and skilful barbers. Prices are extremely reasonable at Crown barbers too. Appointments aren't required at Crown, simply turn up, sit down and enjoy a slick, professional haircut. 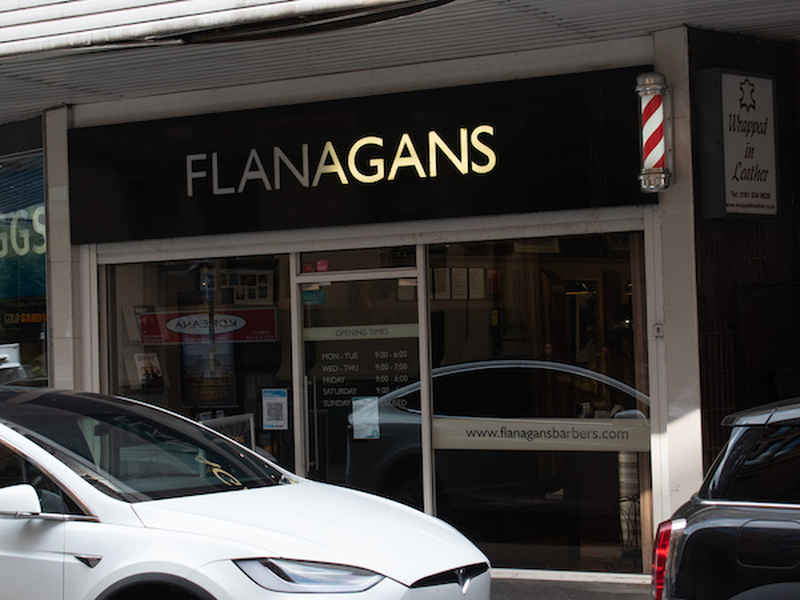 It’s been more than 20 years since Flanagans first began grooming Manchester’s gents. They stay smart and sophisticated on King Street West in the city centre while branches of the barbershop can also be found in Didsbury, Altrincham and Wilmslow. Flanagans say they are a ‘high-end’ barbers merging some of the modern styles with traditional cutting. The city-centre shop, subtly masculine with wood panelling and deep brown leather, is a gentleman's haven. Walk in scruffy and you'll be sure to leave with head held high and a straighter back. Cool barbershop revival vibes at Jersey Street Social Club. Think lots of tattoos, beards, skateboards on walls, vinyl records on walls, the northern soul fist in mosaic form and of course, some splendid boff chops. Jersey Street is the place to go for men’s hair, cut-throat shaves and beard taming with the added treat of SEVEN BRO7HERS beer when most people just fob you off with a Bud or Heineken. Booking online is encouraged but they also do walk-ins with arguably the best waiting area seating in town. London by name only. The London School of Barbering has an outpost up north, specifically on Fountain Street and as well as doing a range of barbering courses from beginner courses to intensive teaching for master barbers, they’ll also do you a trim for cheap. Fades, clipper cuts, scissor cuts and beard trimming all start from £3 with regular offers that sometimes include a free beer. Closed at weekends but open from 9.30am until 7pm at night, it’s a solid option if you can’t fit a mid-week haircut in between business hours. This barbershop is as much a part of the Northern Quarter furniture as cornerstone curry caf' This'n'That. Maclures has been providing shape-ups and traditional cuts since 2001 and have been party to many of Manchester's most experimental hairstyles, from mohawks to man buns. “We’re about quality not quantity. We don’t do five minute haircuts. We do a proper job,” says Mr Maclure. You can also find them doing a “proper job” in Didsbury. 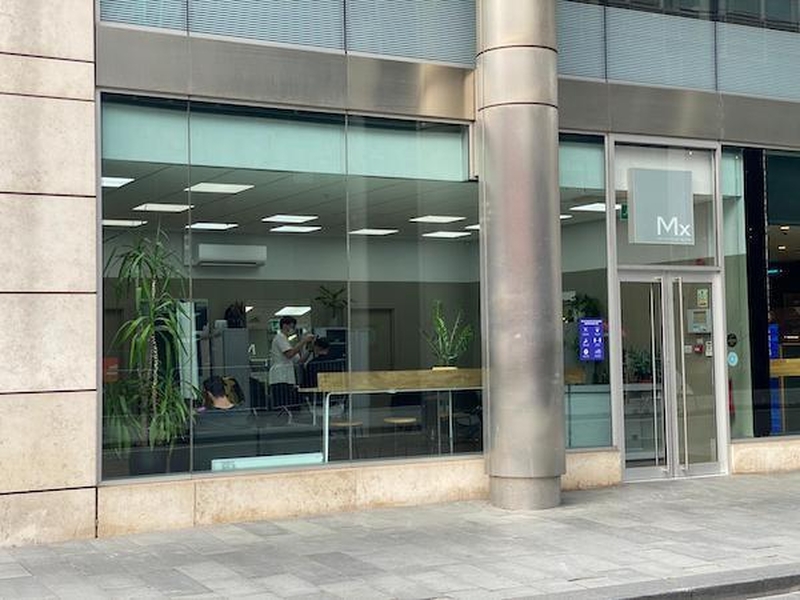 Mx, formerly Mr Male Grooming, in Spinningfields was founded by Chris Phillips and Karl Lewis back in 2011, both bringing a combined experience of over 25 years. Hell-bent on producing the most pristine and well turned-out chaps, Mr also offers a range of cuts and finishes as well as a handy NUS discount. Waltz out of this barbershop trimmed, trendy and in tip-top shape. We really are spoilt for choice when it comes to Northern Quarter trims. Mr Beardmore (which also has a site set for Sale’s Stanley Square) on Dale Street is another classic barber shop with a squad of talented barbers. Known for its modern take on classic styles, as well as individual cuts Beardmore’s will do package sessions including shampooing, haircuts, beard trims and clean razor finishes all in one. Modern Manchester barbering. So goes the tagline at Notjust. The futuristic barbers might be a tough sell to your da (unless your da is Mugatu from Zoolander) with an ethos very much rooted in “the collective” and “neo-traditional artistry”, but the hype is not unwarranted. With cuts starting at £31 and an experience that includes modern interiors, incense and electronic soundwaves setting you at ease (their words not ours). Booking in advance is a must. Tucked away on the second floor of Affleck’s in the Northern Quarter, Palace Barbers is a Manchester institution. A unisex barbers and hairdressers that’s LGBT+ friendly with gender neutral pricing, Palace caters to a diverse range of clients. Owner Steve has been cutting hair for over 20 years, first setting up in Affleck’s in 2009 and he and his team are as at home crafting colourful modern mullets as they are with a finessed short back and sides. A trusted option for alternative cuts. “I'm like the Freud of barbers, for some reason clients like to share with me all their secrets,” laughs P&D barber and co-owner Damo. Alongside business partner Patrick, this haircutting Jamaican-Irish duo own a shop in the Northern Quarter. They’re fun too - you'll find homage to the Jamaican-Irish connection with bottles of Wray and Nephew and Guinness dotted about the shop. As both barbers have a background in women's hairdressing, P&D also offer a hair extension service for women. Come here for both the laughs and the top shape-ups. 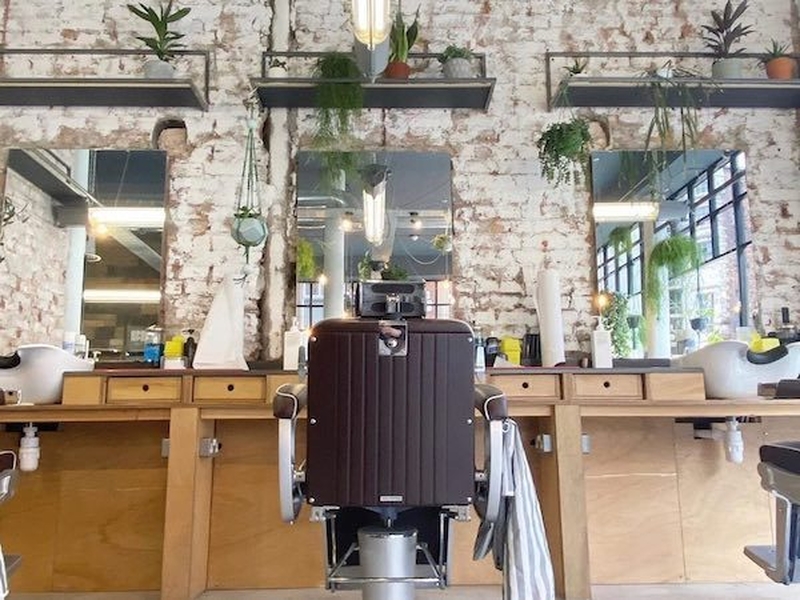 Since opening its first shop on Tib Street, this Northern Quarter barbers has built a reputation for doing things a little differently. They've got a full-blown booze licence, for one, whilst the minimalist fit-out, with touches of the industrial, mirrors the best of Northern Quarter's many nearby bars. They've also got a blinding illustrated doodle map of Northern Quarter covering one entire wall. "From the start we wanted to do things differently," says owner Ross Parlane. "We're one of a few barbershops that takes online bookings, we want people in the chair, not hanging around. We also encourage women to come here, that's a major point of difference." What about the hair? Think traditional English gent with a modern day edge and ahead-of-the-curve styling.

Read next: Sexy Fish to open in Manchester

Read again: The Manchester restaurants, bars and cafes closed thanks to COVID