Clampdown: getting tough on Manchester’s beggars

Part one: What's a PSPO?

“THIS is not about rough sleeping or begging specifically, it’s about behaviour,” says Councillor Joan Davies for Manchester’s Deansgate ward.

She’s talking about the proposed Public Space Protection Order (PSPO) for Manchester city centre. If passed this will cover everywhere inside Miller Street and Great Ancoats Street, the Mancunian Way and the River Irwell.

Manchester City Council say extra powers are needed to help prevent what everybody with eyes to see has witnessed in the city centre these last few years. The result is a measure which incorporates a previous order concerning street drinking and beefs it up into one designed to ensure ‘that everyone is able to enjoy public spaces in our city centre which are safe and welcoming. Nobody should have to put up with behaviour which has a negative impact on them or their environment.’

The order will place restrictions and requirements on certain behaviour in an area. It can last up to three years and can be extended for another three-year period. It’s a criminal offence not to stick to the order, and offenders can either get a fixed penalty notice of £100 or be prosecuted, which could lead to a fine of up to £1,000.

But it wasn’t art, it was just human shit. Welcome to Manchester.

This PSPO will cover eight types of behaviour including:

- Urinating or defecating in a public space (except a toilet)

- To stop obstructing a building entrance/exit, stairwell or highway after being asked to move by an authorised officer

These measures might be aimed at simply ‘behaviour’ as the council says but, clearly, it is vastly the behaviour of beggars which is targeted, even though it applies to us all. The council and its advisers clearly feel that whatever sanctions are in place now are not working.

That looks about right. 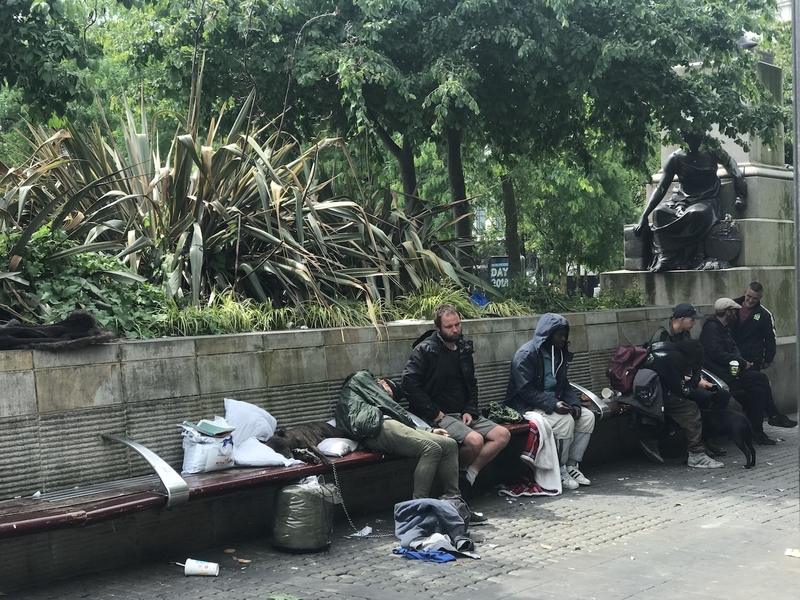 Regular city centre users, occasional visitors and tourists can also see there is a big problem on British streets. Rough sleeping aside, the behaviour of beggars is the principal issue. Lots of people object to the b-word, but it’s hard to describe these people as anything else. We’ll explore the b-word later.

The situation needs to change. I wander the city centre scores of times a week as a tour guide with all sorts of guests from all over the world. So do my fellow guides. This week one of our number and her group, when they refused to give money to a man, was bawled at with, “Fuck off, you don’t care!”. We’ve all had this and worse shouted into the faces of guests.

At certain times the numbers of beggars approaching people on Oxford Street, Market Street and Deansgate is intimidating. This eye-balling is close-up, not simply sitting on the floor with a change pot. Sympathy runs thin after the fourth appeal in two hundred metres.

Meanwhile, the sheer filth generated by mounds of blankets and litter in doorways is astonishing and unhygienic. The tents that appear around the city centre (and it’s odd Angel Meadow Park isn’t in the PSPO area) become litter strewn and close by, often, outdoor toilets appear.

The latter aspect of this collapse in decency is disgusting. Piles of human faeces in alleyways is a return to the worst aspect of the nineteenth century slum. And not just in alleyways. On Tuesday, this week, there was defecation, literally, between Manchester Visitor Information Centre and the TFGM Travel Shop in Piccadilly, just over from the tram stop. It was so perfectly located for maximum effect it might have been a protest artwork. But it wasn’t art, it was just human shit. Welcome to Manchester.

“People from all backgrounds have asked for the types of behaviour covered by the PSPO to be dealt with,” says Councillor Davies. “We have people saying they are not coming into Manchester city centre anymore as they find the experience intimidating, or disturbing, we have families saying they won’t bring in their children. Residents and workers have had to, and have to, pick their way over people sleeping in their doorways and been abused for asking them to move. If people are sleeping in fire exits then surely that should not be allowed. Probably everybody would agree with the hazard that causes.”

Councillor Davies points out the raft of assistance which, while not perfect, is in place for rough sleepers. For instance, the Bed-every-night scheme. Then there are the many other agencies there to help people, the drug rehabilitation programmes and so forth. 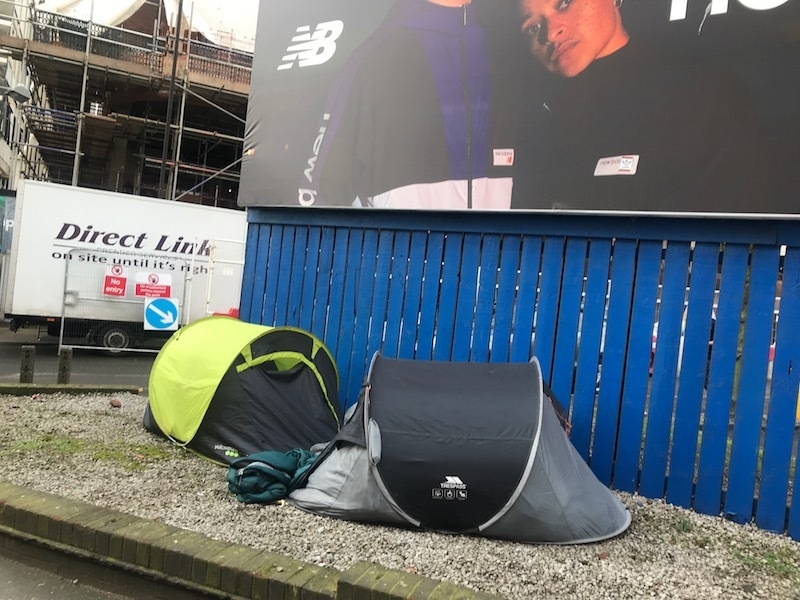 Of course, in essence, the rise in rough sleeping, homelessness and begging is all down to macro policy which has resulted in a failure of mental health provision, in-work poverty (never mind out-of-work poverty), the poor application of universal credit, the ease by which Section 21 eviction notices are sprayed around…the list goes on and is always underpinned by that bloody word ‘austerity’, with the latter encompassing police cuts too.

This might be true, but national policy takes a while, years perhaps, to turn. The government should be utterly ashamed of what it sees in our city and town centres but given their Brexit paralysis, local action is needed. This PSPO might help us address the problem. We should not accept the type of anti-social behaviour we see on the streets just because we have become familiar with it. We should be as shocked as our guests to the city, not inured to it.

Yet, there are clear objections to this PSPO.

Greater Manchester Housing Action (GMHA) are one of many agencies and individuals with legitimate and reasonable criticisms.

They say, ‘£100 fines will achieve little beyond displacing people to areas around the city centre which are already experiencing the same problems. Reference to ‘aggressive or intimidating begging’ only serves to demonise the street homeless people. Public aggression towards other people can already and should be dealt with by the police. Needle disposal points and safe injection rooms are needed urgently across Manchester.’

GMHA are worried that the proposal will, as they and others state, ‘criminalise’ the homeless.

This misses an important element of the on-ground situation. Here comes the b-word again. The beggar problem has already been criminalised, criminal acts are being committed brazenly by beggars.

The example of Ludovic Gabor, who was not homeless but a beggar, is a typical case in point. Another might be the recent police report about a man in Market Street who lives in a hostel in Oldham. He said his universal credit didn’t cover his heroin habit and people in Oldham didn’t give him enough money. That is begging in order to commit a criminal offence, not homelessness or rough sleeping, no matter how sympathetic we feel for the man. The b-word is the only word for it. Let’s call a spade a spade. 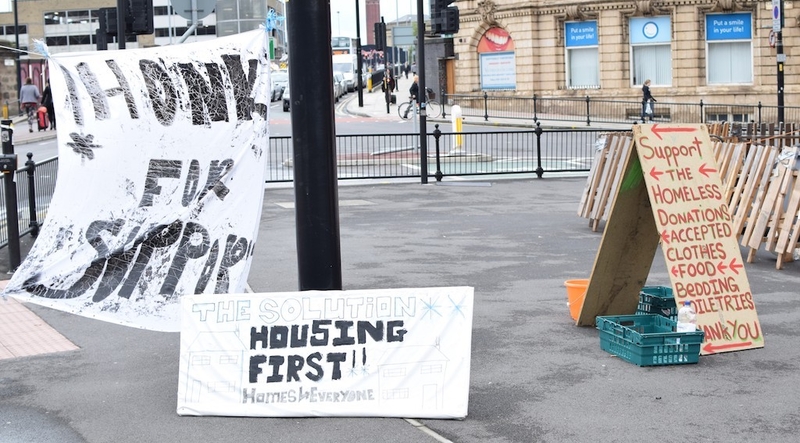 Meanwhile, Councillor John Leech of the Liberal Democrats is not alone in calling the proposed PSPO ‘social cleansing’. This sensationalises an attempt to ensure a two-way street of common human decency in the city centre. It ignores the fact this cannot be social cleansing as there are services in place to help care for people, remove them from addictions and find them a bed, if they are genuinely homeless. Social cleansing is a policy that simply kicks people out, or in its strictest sense murders them.

Anybody who thinks this is the same as that, which has notoriously happened in some South American cities, is being deliberately blind to reality. Nor is the PSPO the type of low-level social cleansing we see in say, the controlled environment of The Trafford Centre, which doesn’t want its shiny marble halls sullied by unsightly people. Manchester city centre’s streets are 99.9% public, but the behaviour of certain individuals is beyond civic decency and offends and occasionally threatens residents, workers and visitors. Criminal behaviour should be sanctioned and then these people offered help. If this PSPO can assist in preventing such behaviour while also redirecting people to the services that can assist them it surely should be welcomed.

Greater Manchester Mayor Andy Burnham, a statutory consultee for this city council proposal, and a man who has put ending rough sleeping at the top of his to-do list, has made this clear.

He says: “I would never support a proposal which criminalised or fined people simply because they have nowhere to go, or people sleeping rough being targeted, harassed or forced to move on when they are doing nothing wrong and causing no threat.

“However, behaviour which is anti-social, aggressive, intimidating, or prevents others going about their lawful business does need to be challenged, regardless of the status of who is perpetrating it.”

He also points out: “We ask our police and public officials to treat those who find themselves homeless on our streets with compassion and signpost them to the many places where they can get support.”

Of course, many of the loudest people on social media shrieking ‘social cleansing’ are part of the present ‘anti’ anything mood. They hate politicians or anything that vaguely whiffs of ‘the authorities’, big government, big money, business in general. They even hate objectivity, adoring their own subjective view. The beggar situation is just another stick with which to pursue their nihilistic agenda.

That aside, there is however one big question hanging over this Public Space Protection Order. 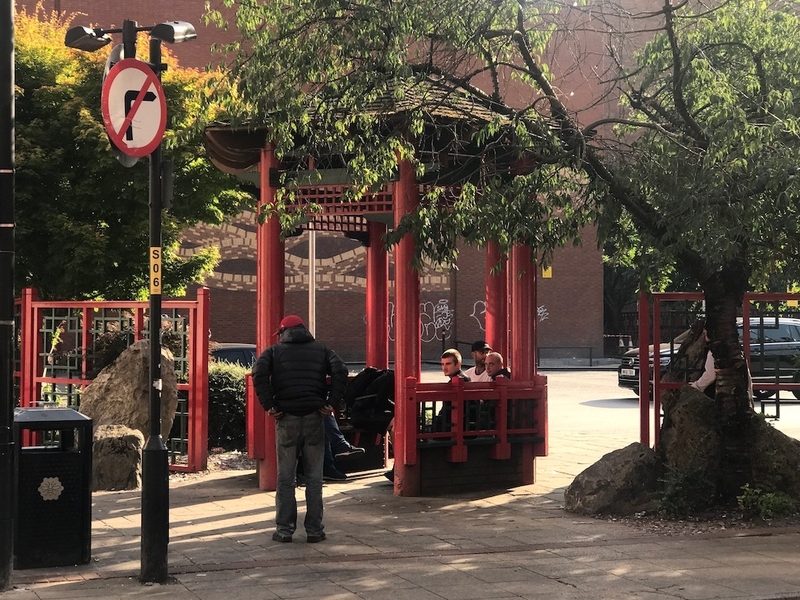 How could I pay the fine anyway, what’s the point?

Of course, the big question is will the PSPO work, or as GMHA say, will it be ‘counter-productive’. If the day-to-day experience is not improved in the city centre, what will have been the point?

“I would hope that it would improve the situation,” says Councillor Joan Davies. “There aren’t enough police, and while they are doing good work, this will create a wider group of enforcement officers who can take action. The anti-street drinking bye-law saw people amend their habits, I hope this does too. People have asked for more action on this and that’s what this, we hope, will deliver, but it will be delivered with care and compassion too.”

Down on Oxford Street on a Thursday morning, the beggars and rough sleepers didn’t think £100, or the threat of a £1,000 fine, would make a splash of difference. They were of one voice about the effects of the proposed PSPO.

“I need to beg because I get no benefits and I have no money and no home, so how could I pay the fine anyway, what’s the point?” said one.

“It’s a waste of time, nobody will pay it, then we’ll get arrested and come back if we need to. It happens all the time,” said another who claims if he had a proper house then he might be off the streets and not begging.

All of the people we asked denied responsibility for the behaviour covered by the proposed PSPO. Returning through Chinatown, the little pavilion in the square (pictured above) was full of beggars passing around suspicious substances. It used to be the place where the local pensioners from the flats nearby would sit. Despite the doubts of the people we talked to on the streets, if this PSPO can indeed be an extra tool to prevent anti-social behaviour and put those pensioners back there, then surely it's worth pursuing.

You can learn more about the proposed Public Space Protection Order (PSPO) for Manchester city centre here, and also comment on it. The closing date for the consultation is Monday 8 April 2019.

A crowdfunder for defaced mural has already raised over £30,000