On Monday 9th September a 17-year-old boy was sentenced to six months in prison at Manchester Youth Court after he was found carrying a knife for the third time in Sale, Trafford. On the same day a 15-year-old boy was charged with being in a possession of a knife in a public place. He is due to appear at Manchester Youth Court on Monday 23rd September.

On Tuesday 10th September a 15-year-old boy was charged with possession of a knife in a public place, in Manchester City Centre, following an incident in Bury, and is due to appear at Manchester Youth Court on Monday 16th September.

It’s cases like these, and of course the tragedy of Yousef Ghaleb Makki, aged 17, who was stabbed in Hale Barns earlier this year, that fuel the current feeling that knife crime is out of control, especially among the young.

Politicians have noted the public mood, with Lib Dem MEP Jane Brophy warning that Westminster's obsession with London is pushing Manchester to breaking point: “Knife crime is often portrayed as an issue that only affects London but here in the North West, we are approaching breaking point, “ she said. "These figures clearly show the problem is hitting other cities too and I'm terrified that Westminister is becoming blind to knife crime anywhere outside of London. Brexit may be making the headlines but families are being torn apart. The Government must not be distracted by Brexit and take immediate action.”

But is this fear really anything new?  A report from the Centre for Crime and Justice Studies said: “A spate of killings of teenagers and children in London and other inner cities in the last few of years have sparked off significant public anxiety and media attention. Such highly publicised tragic events have also raised concerns that violent crime among young people is rising.” The report was written in 2009, demonstrating that fears about knife crime are an ever-present undercurrent in society that bubble up every so often.

In response, Operation Sycamore, a major push by Greater Manchester Police to tackle knife crime, has been launched. This week (16th - 22nd September) GMP are operating a knife amnesty, allowing knives to be dropped off anonymously at ten collection points around Greater Manchester, without fear of reprisal.

As well as so-called ‘hot spot’ policing and knife sweeps, GMP are also running daily ‘spot the knife’ competitions on social media, which has been compared by a critic to Where’s Wally?, potentially undermining the seriousness of the situation. However, hiding knives in public places is a recognised part of the problem, with the Home Office currently trialling new technology to detect hidden weapons. The police also say that it gives the public a greater understanding of what GMP officers deal with every day.

According to the Centre for Crime and Justice Studies, there is scant evidence to support knife amnesties as a means of reducing violent crime (they may however, be effective in raising public awareness). A wider view is that though people who intend to use knives may not be making use of the amnesty, young people who are given knives to hold by their peers could use them as a means of getting rid of them, as well as relatives or people who find them in public places.

What does make such tactics more effective, states the Centre, is situating them within larger initiatives that tackle the problem at the root, with early years and education being a major focus.

Day 2 - Can you spot the hidden knife?

Knife-crime is a worry and fear for communities across Greater Manchester. knives are being hidden in public places and used for crime. GMP are aware of this, are you? #hiddenknives #OpSceptre pic.twitter.com/BGjbGZ0VSQ
— Greater Manchester Police (@gmpolice) September 17, 2019

Detective Superintendent Chris Downey, who is in charge of running Operation Sycamore said: “My role is a great challenge and is focusing on the priority area of violent crime within communities. One of my aims is to understand the causes of knife crime, with a particular interest in the younger members of our communities.

“The consequences around carrying a knife are huge and range from being expelled from school, through to loss of life. A big part of my role is to inform people of the catastrophic after-effects of carrying a knife, with one point in particular being that even if you don’t plan on using it, your chances of becoming a victim of knife crime increases just by carrying the weapon.”

Greater Manchester was recently awarded £3.37 million to set up a Violence Reduction Unit. The new unit will bring together police, youth workers, health and education professionals and he money will be spent on projects aimed at diverting people away from violence, including work with young people at risk of committing crime or who are known to have committed offences or carry knives.

The original Violence Reduction Unit was set up by police in Glasgow to tackle this particular type of crime. Scotland was the first country in the world to adopt a public health approach to violence and are the only police members of the World Health Organisation’s Violence Prevention Alliance. A public health approach means it is necessary to address societal and attitudinal aspects and that closer links with health, education and family backgrounds are key to changing behaviour.

As a result, the Operation Sycamore team will aim to better understand the reasons behind why young people continue to carry a knife and will work with partner agencies to increase understanding of the consequences of carrying a knife.

Deputy Mayor for Policing, Crime, Criminal Justice and Fire Beverley Hughes said: “Tackling serious violence needs a partnership approach... This funding will allow us to build on this approach and work more closely together to understand the causes and then respond appropriately, focussing on prevention, early intervention and targeted support.

“We will only succeed through collaboration and it has been really encouraging that key partners across the city-region have been throwing their support behind the programme. Greater Manchester is already doing so much good work to tackle serious violence, with money already being spent on additional frontline policing, targeted at the areas of Greater Manchester where there are particular issues with violent crime, including knife crime and personal robberies. However, if we can drive young people away from violence at the earliest possible opportunity we can make a real difference to them and our communities.”

So is Manchester really suffering a knife crime epidemic or is it public fear (and tabloid headlines) feeding this perception? The data is confusing and hard to read, not least because of an issue in data collection - most analysis you might see across the news does not include figures for Greater Manchester. Up until the end of 2017, GMP were undercounting incidents of crime involving a knife or sharp instrument. So when analysis by Sky News for instance, states that knife crime is rising by 30% across the country, this does not include Manchester figures. This means it is difficult to create a meaningful year-on-year comparison. An original House of Commons briefing actually shows that knife crime decreased by 6% in the period 2011-2018, however these figures are now in dispute due to the undercounting issue.

Figures published by the Liberal Democrats state that there has been 3,400 knife crimes in the last 12 months, however a spreadsheet available on the GMP website records a search for all crimes involving a knife in the last three years (up to 9th March 2019) as returning 8566 results (this figure may contain duplicate results due to the way the search was carried out). As this figure refers to any crime involving a knife it might be more instructive to look at what many people think of when they think of knife crime – stabbing. 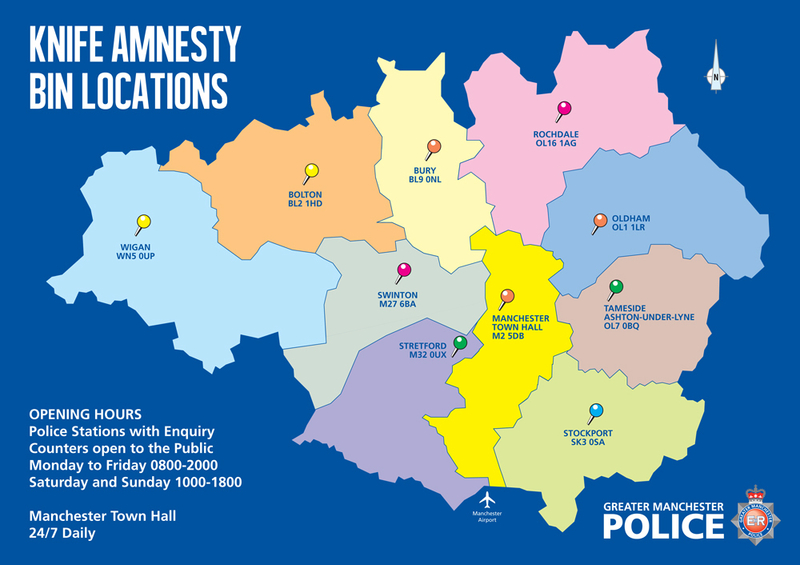 According to an FOI request lodged with GMP, in 2017-18 there were 19 fatal stabbings, and 10 in 2018-19 which suggests that stabbings with fatal outcomes are not increasing. And though the headlines focus on young teenagers carrying knives, the majority of victims and offenders are still in the 19-30 bracket. Non-fatal stabbings are recorded as 3,673 in 2018 and 916 in 2019 (up until 19th of April).

Another source of information is admissions to hospital – a major pathway for the police to gather information about violent crime. MRI, Manchester Royal Children’s Hospital and Wythenshawe jointly treated 245 non-accidental knife injuries in 2017/18 and 249 in 2018/19 so far. Not all of these would be the result of a crime (for instance, self-inflicted wounds) and to preserve confidentiality the hospitals do not say precisely how many were fatal, though it does say the number is “small”. The hospitals mentioned follow General Medical Council guidance requiring hospital staff to inform police about victims of significant violent crime.

However, as the family of Yousef Ghaleb Makki would surely agree, one fatality is one too many. Trying to understand what the statistics say in no way undermines the fact that action is needed. Greater Manchester Police had its funding cut by 22% over the last seven years, and its workforce has reduced by the same rate – that’s nearly a quarter of police officers and support workers gone. No wonder Twitter users are sarcastic about playing spot the knife when what they really want to see is more officers on the street.

Knives - what does the law say?

Carry a knife in public without good reason, unless it has a folding blade with a cutting edge 3 inches long or less

Carry, buy or sell any type of banned knife

Use any knife in a threatening way (even a legal knife)

There are exceptions, for example it is legal to carry a knife for religious purposes or if it is a knife you use for your work.