Manchester International Festival: the hits and misses so far (part 2)

David Lynch at HOME, The Nico Project and Tao of Glass reviewed

Almost a fortnight since its launch, Manchester International Festival 2019 has garnered the same mix of bafflement, delight and aversion as its predecessors. Perhaps, some would argue, that’s the whole point of MIF. Here at Confidential, our reviewers have also run the whole gamut of emotions: puzzled at Yoko Ono’s Bells for Peace, enthralled at the premiere of Invisible Cities…and that’s just for starters.

Recent happenings have been as offbeat as ever, from Ivo van Hove’s gripping adaption of The Fountainhead to US choreographer Trajal Harrell’s provocative dance work - inspired by Cat on a Hot Tin Roof - and an ambitious evening of literature, translated live from seven different languages. 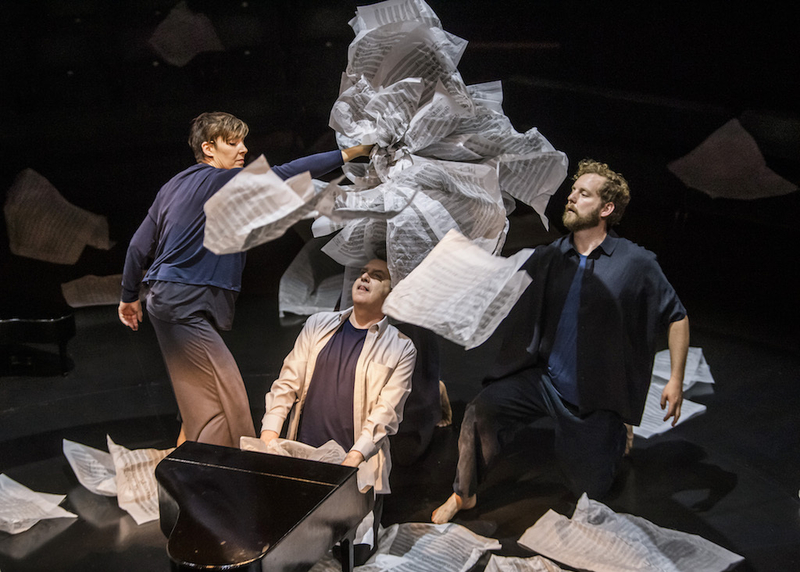 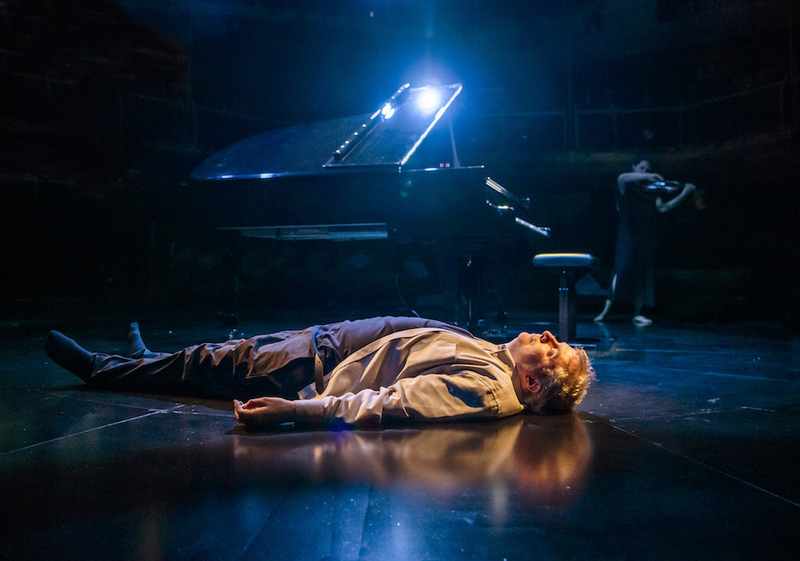 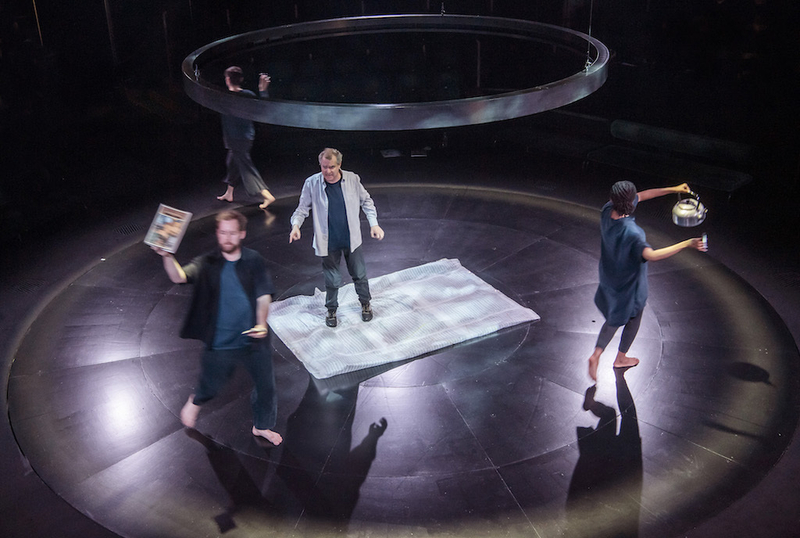 Writer and co-director Phelim McDermott described Tao of Glass as a show “about what emerges from the space when there is nothing”. Other themes crop up - loss, grief, dreams, psychology - but trying to ‘create something from nothing’ seems most accurate to me.

What ‘emerges’ is a show that’s strung together from McDermott’s anecdotes and musings, one akin to the kintsugi he talks about. This is the Japanese art of repairing broken pottery using precious metal lacquer, turning the flaws into something beautiful. But I agree with McDermott’s concession that Tao of Glass is “more like pieces from eight different pots”. It’s a disparate medley of random stories, cobbled together by the ‘precious metal’ of Glass’ music.

Admittedly, McDermott is a superb storyteller; warm and funny, he has the audience chuckling throughout. From his early visits to the Royal Exchange (including the time Patricia Routledge, known as Hyacinth Bucket, flew in on a swing) to his impression of late friend and children’s author and illustrator Maurice Sendak, his tales can be interesting too. And, when he talks of his acquaintance with Philip Glass, it’s clear they have a very special bond, spanning McDermott’s childhood fascination with Glass to them working together in New York. Indeed, MIF artistic director John McGrath called their friendship “the glue holding the pieces together” (that analogy again) as the show was developing, becoming lost and emerging as something unexpected along the way.

However, it soon becomes clear that the story of how the show came to be has bizarrely become the show itself. That and an occasionally self-indulgent outlet for McDermott’s ramblings, which at one point descends into a lecture on consciousness. His admittance that he once sent Glass to sleep doesn’t altogether surprise me.

The props, though simplistic, are effective - managed by a trio of ‘prop-bearers’ dressed in black - although a later scene that involved lots of Sellotape and paper baffled me, and I was disappointed by the lack of promised puppetry. This turned out to be one (albeit lovely) little  boy, who appeared only occasionally, and a lone scene involving shadow puppetry.

To me, everything seemed like an afterthought to Glass’ music - played superbly by the live musicians. When this was finally given centre stage, it led to some powerful scenes indeed: a lone Steinway, almost like a ghost, and the gorgeous finale in which Glass himself appears. It’s just a shame the ending was my favourite part. Vicky Smith 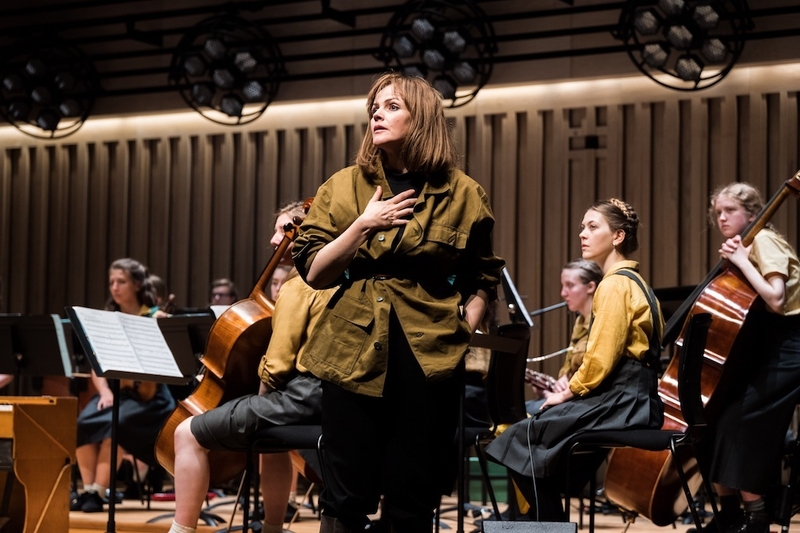 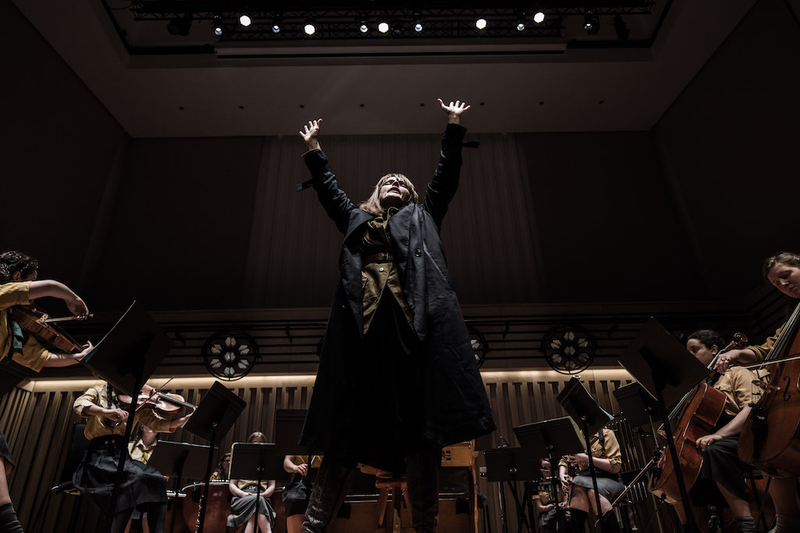 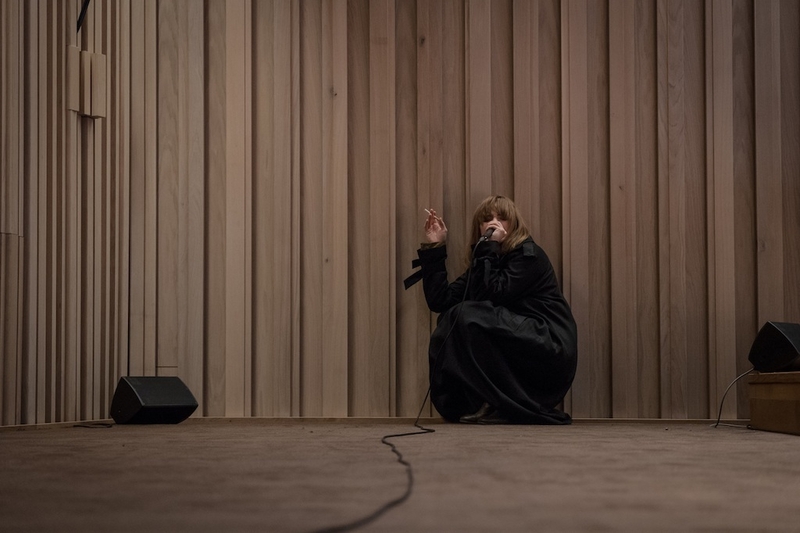 The ever-commanding Maxine Peake enters the stage visibly distressed, inarticulate, hands shaking. Her anguish becomes more pronounced. She lights a cigarette, taking long, silent draws; she crumples against the wall in a fit of sobs; she weaves around the orchestra of fifteen female Hitler Youth members playing the haunting music of Nico’s 1968 Marble Index album.

The Nico Project isn’t for the faint of heart. And rightly so, because Nico was nobody’s sweetheart.

This highly contested artist has been called a moon goddess, ice queen, and freak. Bob Dylan and Leonard Cohen wrote songs for her, Andy Warhol made her the frontliner of the Velvet Underground, her later solo work influenced musicians as diverse as Björk and PJ Harvey.

Nico, who grew up in Nazi Germany, rode her striking good looks into the limelight, but later actively transformed herself from a tall, thin, blonde with high cheekbones and full lips into a haggard Goth. “She decided she must become unsightly in the eyes of those who loved her for her good looks,” music historian Richard Witts writes. In her later years, she became a heroin junkie and introduced her son to the drug.

While there’s a risk of reappropriating figures like Nico as feminist icons, director Sarah Frankcom and Peake avoid doing so in this daring, uncomfortable, experimental piece. It won’t leave you feeling inspired or empowered, but rather deeply unsettled by the powerful waves of anguish that have enveloped you. As such, it will be unsatisfying for those after more traditional character-driven exposition.

But what would you expect from a performance inspired by Nico’s Marble Index album with its haunting, hypnotic, otherworldly sound? When the album was released to little acclaim, John Cale of the Velvet Underground explained the album’s flop like this: "You can’t sell suicide." And yet today the album is considered an important contribution to the European canon.

Composer Anna Clyne has reworked the album, which is performed by young musicians from Manchester’s Royal Northern College of Music. The young performers begin looking concerned for Peake but soon become possessed themselves. As such, the performance hints at Nico’s destructive nature and the traumatic experiences that shaped her.

Keeping Nico’s spectral sound at the heart of the show, The Nico Project unsettles without depressing, and does justice to an iconoclast determined to thwart her own status as an icon. Andrea Sandor 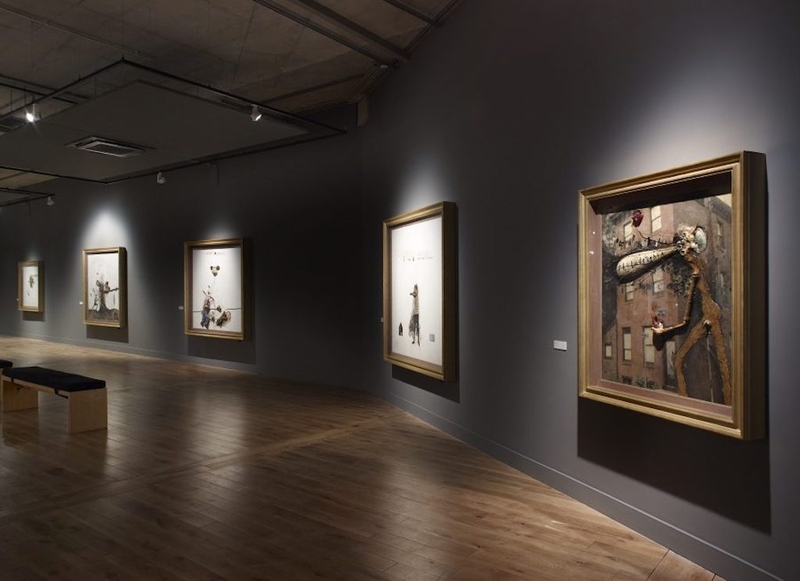 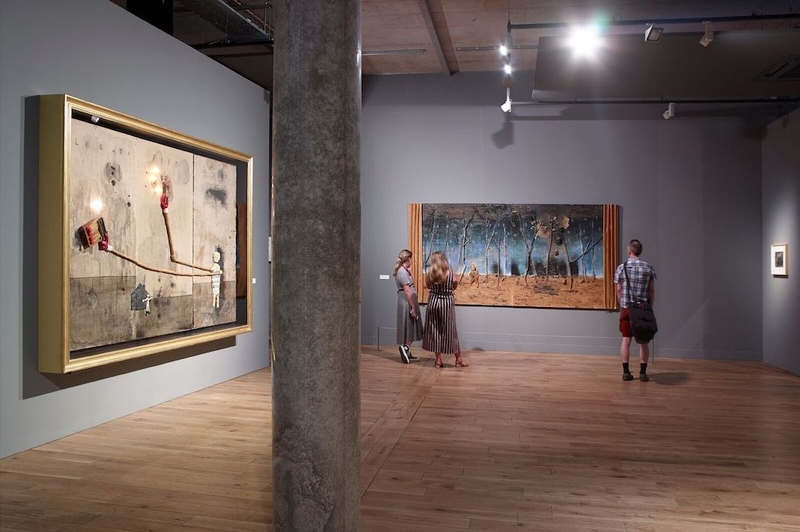 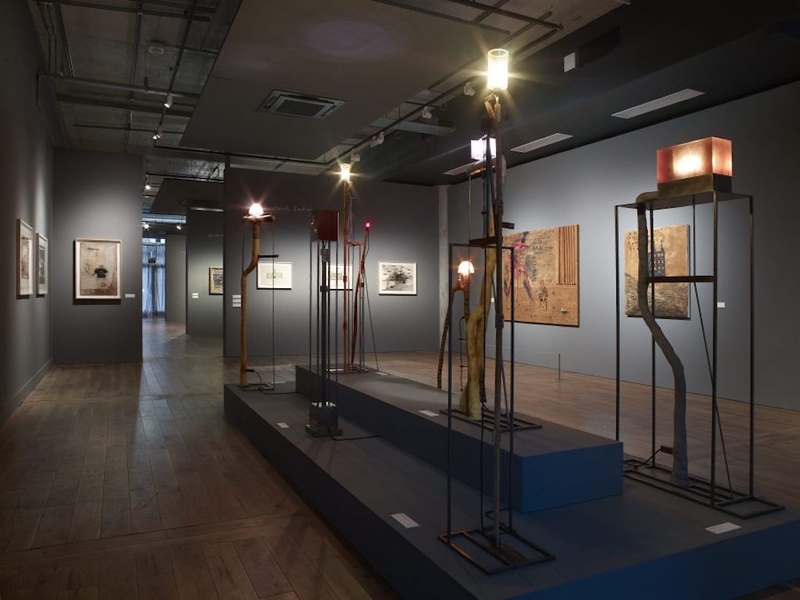 DAVID LYNCH: MY HEAD IS DISCONNECTED

David Lynch has built a career out of making people feel uncomfortable: from disorientating and disturbing films like Blue Velvet and Mulholland Drive to the nightmarish Eraserhead and, perhaps his most famous work, the early nineties cult TV series Twin Peaks. His fans are often obsessive and evangelical so it was a shame the man himself couldn’t make it over to Manchester, only appearing via Skype for a live Q&A.

If you only know Lynch as a filmmaker, it may come as a surprise that he is also a prolific artist, having studied at Pennsylvania Academy of the Fine Arts. Some of his films have been inspired by his own paintings. The 88 works on display in this, his first major UK exhibition, are grouped into four themed ‘chapters’ with parallels to the themes explored in his films.

City On Fire is our introduction to Lynch’s art, featuring huge textural paintings like Bob’s Second Dream (2011) - perhaps a reference to Killer BOB from Twin Peaks - which incorporates light bulbs and protruding wires. While there isn’t a direct correlation with Lynch’s films, his trademark whimsical and surreal violence are prominent.

In Nothing Here we are treated to more paintings made from bulging, glistening and gross ‘mixed materials’ which I am convinced include bodily excretions. This collection of childlike pieces explores the more disturbing crannies of psyche and identity. I was especially taken by Oh… I said a bad thing (2009) as I could unfortunately relate to the sad chap trying to shove said ‘bad thing’ back into his gob. Another interesting piece was Drawing from a Ricky Board (1987-1988), in which twenty identical dead flies are given individual names.

Lynch’s fascination with the smoke-billowing factories of the industrial world is present in Industrial Empire, which includes a set of 27 miniature sketches inside used matchbooks. Mimicking the darkness present in his films, Lynch uses black profusely to create blurry, nightmarish images that contrast with the garish American dream this industry underpins. A palette cleansing set of colourful lamp sculptures break things up a bit.

Finally, an unconventional set of ‘Bedtime Stories’ feature recurring characters Bob, Sally, Billy and Ricky in seemingly innocent small-town scenarios but with real-life horror rupturing through them. There is a noticeable influence from Lynch’s hero Francis Bacon throughout but also echoes of Basquiat and even the kookiness of fellow filmmaker Tim Burton, especially in his Melancholy Death of Oyster Boy. It’s a must see if you’re a fan but, even if you’re not, it’s worth a wander and gives you an excuse to get your tea at HOME’s lovely restaurant. Kelly Bishop

My Head is Disconnected is on until the end of the festival (and then until 29 September) at HOME, 2 Tony Wilson Place, M15 4FN (various times; free)